My first introduction to true space-based realtime strategy came near the end of 1999, roughly 18 months after the release of Starcraft which had been dominating my RTS time back then. When I first caught wind of a new title by Relic and Sierra I was fully in the grips of space-based gaming. From the old Wing Commander games to Freespace and the X games, I was desperately trying to find more titles that had to do with the inky blackness of space rather than the wooded forests filled with elves, orcs, and other mystical beings (though I still love a good fantasy game) and since I had to wait another year before Tachyon: The Fringe was released, I needed to find something. Enter Homeworld, which released at the end of September of 1999 and it was everything that I had dreamed of. 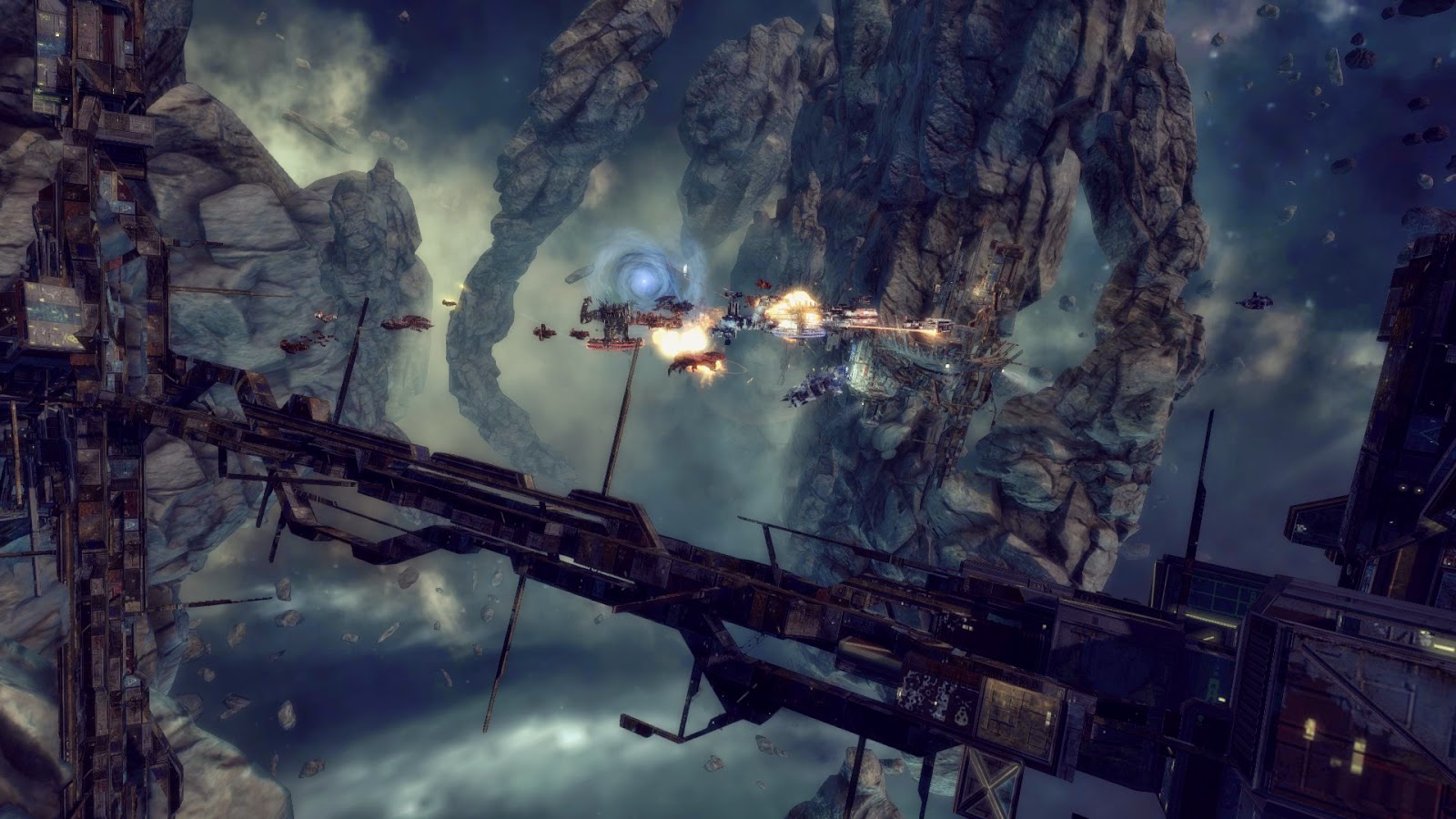 A space-based realtime strategy game that allowed me to control a fleet of wicked looking space craft through the truly 3-dimensional “space” of deep space. My mothership, tucked away in some dusty nebula could send out ships to salvage from asteroids while roving bands of bombers, fighters, frigates and corvettes would protect my resource gathers operations. Pirates and other evil-doers would jump in-system and start skirmishing with my patrol ships which would then escalate into an all out war between two massive fleets. I was immediately hooked and eagerly awaited the sequel which came in 2003 and after playing it heavily for nearly a year, the title disappeared in the shadow of 2004’s World of Warcraft (as so many great titles did). Some ten years later there has yet to be a space-based RTS game like Homeworld and Homeworld 2, though Sins of a Solar Empire comes very close (though it is more of a 4X-RTS hybrid, which is excellent and totally okay) it was not quite the level of Homeworld. Relic truly got something right with Homeworld really set the bar high for space-based realtime strategy games; in gameplay, graphics, storytelling and balance, you will not find another title quite like Homeworld.

Enter 2014 and the space-based gaming genre has seen an explosion of games; from massive productions like Star Citizen and Elite: Dangerous to less-known titles like Distant Worlds: Universe, X: Rebirth, and the Strike Suit titles. Space is no longer the final frontier as developers are constantly coming up with new ways to bring fantastic adventures to the fans of the genre as evidenced in No Man’s Sky. While all of this exposure on the flexibility of space in video games is great, the realtime strategy genre has yet to see any true releases in this new-found boom of space-based games. Enter Ancient Space by CreativeForge Games and Paradox Interactive; looking to bring some focus back on the realtime strategy genre, Ancient Space is looking to not only bring back some of the love for the realtime genre, but to change it up a little bit as well. Giving you the ability to upgrade your fleet as you continue take on missions such as stealth or escort missions, gather reasons to increase your fleet size and research upgrades, Ancient Space is working to be both something new and old, the question is though, does it succeed?

Ancient Space is an attractive game; ship designs are not only futuristic but they are realistic as well. When you get close to some of the different bombers or frigates, the ship actually looks like something that could, and would be used in future space combat. Some of the larger ships, carriers, have docking bays and landing areas that are animated and functional as your smaller units dock are released after being built; the level of detail in your space stations is quite stunning, with small walkways able to be seen. The real winner though is in the environment. 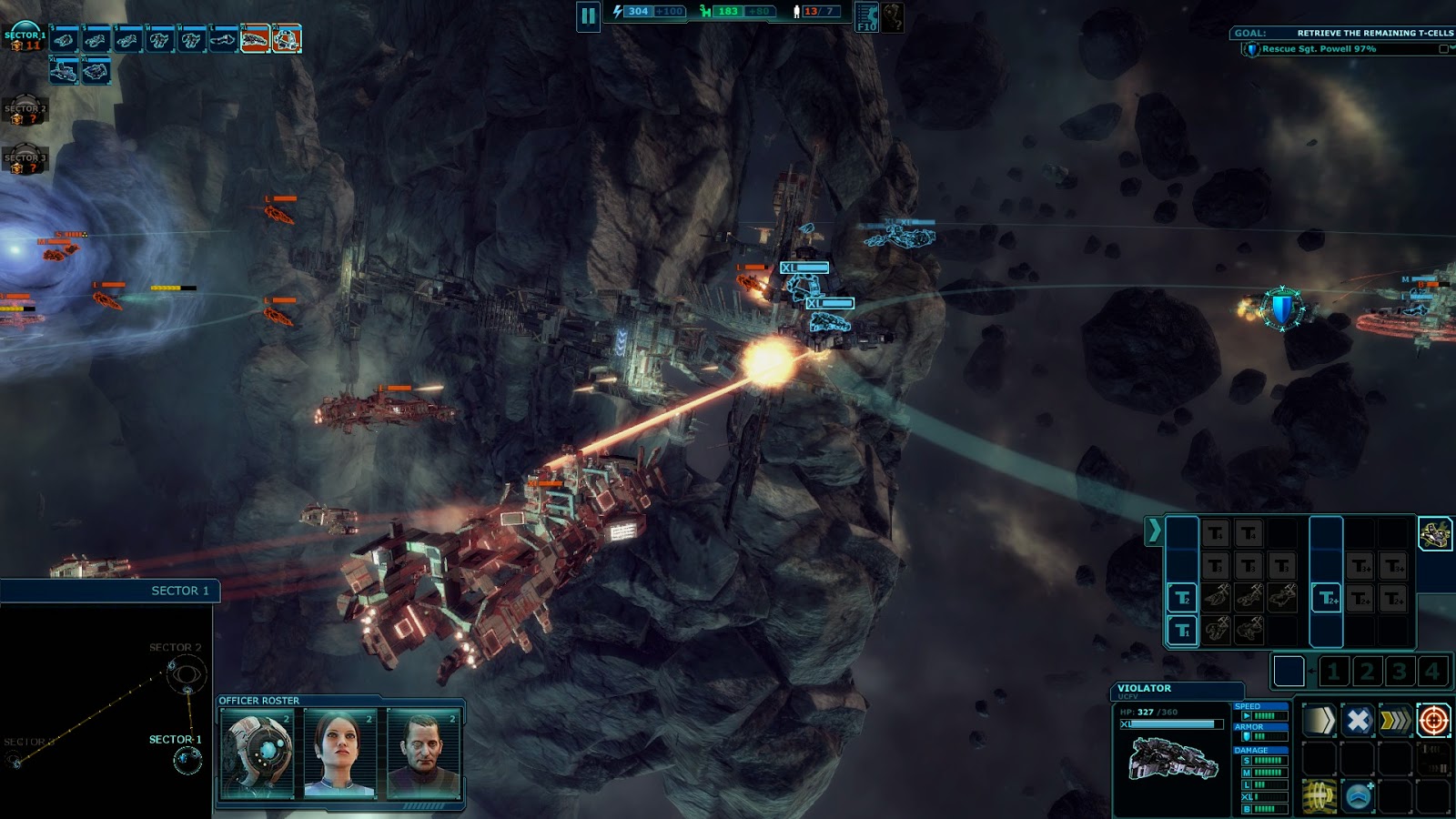 While space is far more empty than it is populated, the corner of the universe where Ancient Space takes place is a haven for asteroids and various gas planets and nebulae which leaves a ton of creative license on CreativeForge’s hands. Beautiful asteroid-based colonies are seen, in some cases even flown through as you hunt down enemy ships. Foggy space dust obscures your view as you move through various parts in some near-orbit levels and which makes the perfect environment for your stealth runs. You will also find that asteroid debris, or simply the shattered remains of an old ship provide the perfect cover as you are struggling to escort your mark to its destinations. Needless to say, Ancient Space is one of the best looking space-based games I have seen outside of the AAA mega productions of Elite: Dangerous and Star Citizen.

Unfortunately though, the gorgeous environments and wonderful ship designs come at a price. Not in framerate, which is excellent by the way (denoting a wonderfully optimized engine), nor in quality of gameplay, but rather in size of the environments that you are able to play in. Nearly every single level feels hectic, chaotic, and worst of all, claustrophobic. I do not believe I have ever played a game where space was the setting yet the level design had me feeling like I was stuck inside of my t-shirt with no way out. I became more and more frustrated as the game wore on because I wanted to breathe and stretch my elbows; to build a massive fleet and flex my military might and tactical capabilities. Instead I was running small circles around ships that were running even smaller circles in areas that were already small circles; it all just felt very … small.

Mind you this is not always a terrible thing, but Ancient Space is stuck somewhere between open fleet-based real-time strategy and tight, squad-based real-time strategy and in some cases this could be a good thing. In Ancient Space’s case, it is not a good thing. More often than not I was confused as to whether I was playing an open fleet-based game inside of a Tic-Tac box or if I was playing a squad-based game inside a massive playing board; the continuity was broken and Ancient Space’s sense of ‘self’ felt off, as if it did not know which it wanted to be. It is still a good real-time strategy title, it just does not know which type of RTS game it wants to be, and that is okay as the core mechanics are fairly sound and make up for the identity crisis that is happening throughout the game. 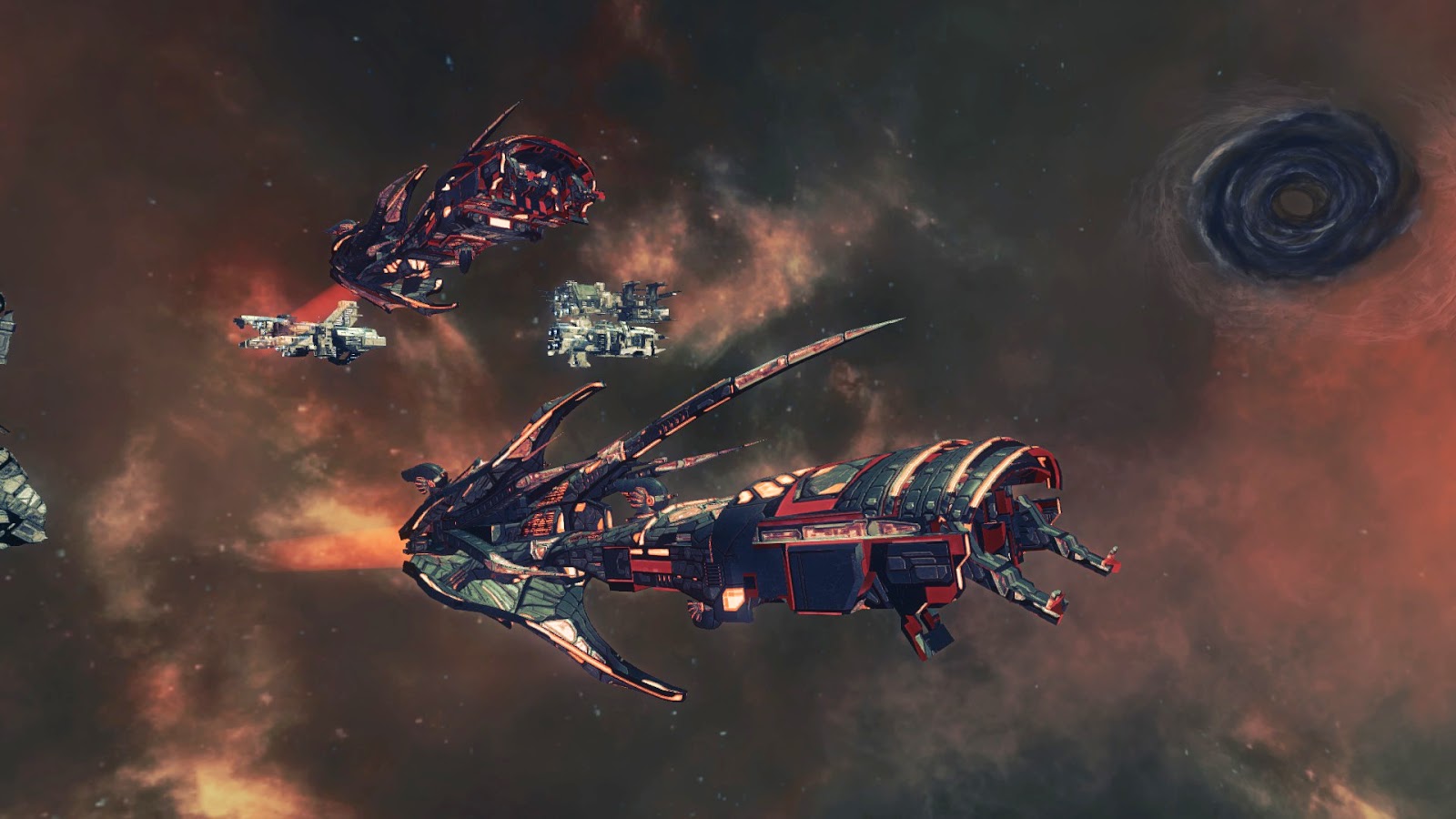 The soundtrack for Ancient Space, along with the narration, are top-notch; I would expect this type of audio engineering out of a massive triple-A studio, not a small studio. With names like John Billingsley (Star Trek Enterprise), Aaron Douglas (Battlestar Galactica) and, in my opinion the best of the bunch, Ron Glass (Firefly) all join the cast of celebrated voice actors. I could personally sit around and listen to Ron Glass talk about nonsense all day long; I mean, come on, it is Shepard Book himself! He has the perfect voice for any form of space opera and it fits in quite well with where Ancient Space tries to take you. Other notables are Dina Meyer ala Starship Troopers fame (she plays Dizzy in the movie) and Dwight Schultz from Star Trek: The Next Generation. There are some serious audio chops thrown at Ancient Space though they are not quite enough to save the core gameplay of the title.

As I mentioned, it feels a bit disjointed, like it does not know whether it wants to be a fleet-based game or a squad-based game and it tends to confuse a gamer. Standard real-time strategy tropes are there, from turtling defensive sectors to resource gathering, but it feels a bit hollow as the focus tries to be a bit more on the ship-to-ship combat and less on the other aspects of resource and fleet management. I also found that there were plenty of cases, both at the beginning and towards the end of the campaign where I was taking a small fleet up against vastly inefficient forces; in one case I was being attacked or rather, harassed by three ships and I would crush them with an overwhelming force. Only then I would scour nearby sectors and manage to destroy their ‘main fleet’ of about four more ships. There were a few other times though where my sizable fleet would jump in sector to find dozens of ships waiting to pounce and all I could do was send in wave after wave to just whittle the enemy down. As I said, the game seemed confused as to what it wants to be.

Outside of the relative oddities between being a fleet-based real-time strategy game and a squad-based real-time strategy game, Ancient Space is a fun title and a great way to blow a few hours here and there. With some of the best audio I have seen out of such a small studio, Ancient Space’s narrative and background music can carry you through some of the more lackluster gameplay mechanics, though not enough to save the title entirely. Gorgeous graphics and environments are incredibly limited by the fact that you can only “move” within these tiny sectors that make up each board which in turns limits and restricts the game as a whole.

Toting “exploration elements” when there is no real exploratory freedom sounds more like a play on hype and buzzwords than it is on any form of true statement regarding Ancient Space’s capabilities. While Ancient Space is still a space-based real-time strategy title, it does little to fill the void the was left by the Homeworld franchise all those years ago, though in its own right, Ancient Space is a passable, albeit plain space-based title. This is certainly one that with modding support could become far more than it really is (I would love to see the Mass Effect world modded into this engine; it would work perfectly for the fight against the Reapers or the First Contact Wars).