Ar nosurge: Ode to An Unborn Star is a continuation of a PlayStation Vita title called Surge Concerto: Ciel nosurge which was a life simulation game that has not seen a release outside of Japan (yet), and something of a pseudo-prequel to the Ar Tonelico series that is also developed by Gust. The reason I mention a pseudo-prequel is that Ar nosurge and Ar Tonelico take place in the same universe with the same mythos and even a number of the same mechanics between the two franchises, however the similarities stop there as the games each cover their own topics at their own times with non-related characters. Ar nosurge: Ode to an Unborn Star, Gust’s most recent release here in the West uses the Dive system as seen in the Ar Tonelico series as well as a few other feature so fans of Gust’s previous works will certain feel right at home. 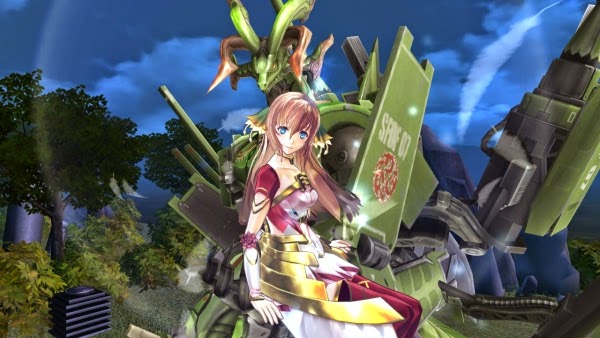 Now to call Ar nosurge a “JRPG” would not necessarily be untrue, though it would not be the whole truth either, as the game leans heavily on JRPG foundations and tropes, but also pulls heavily from the kinetic visual novel genre as well as the life simulation genre, creating a unique blend of gameplay that may be unappealing to some members of the West but is quite popular out East. In Ar nosurge: Ode to an Unborn Star, you play as Delta, a disgraced ex-member of the elite fighting force PLASMA who is now the proud owner of a failing restaurant (which has only one menu item, salty rice …) and you embark on and adventure to protect Felion from the Sharl, a race of beings that whisks the good people of Felion away to Quanturv (maybe? More on that in a few…). With the strange mix of gameplay styles, does this anime art-style adventure live up to Gust’s Ar Tonelico or Atelier franchises? Continue on to find out more.

I am going to take and tackle my previous comment about Quanturv (?) right off the bat, as it is just a part of a greater problem. Translation. Normally Gust and Tecmo Koei bring West well-translated games, I cannot think of a single instance in the Atelier games where translation was this bad. With the English dubbing on, all cast members refer to “Quanturv” as “Quantave” verbally, though there are a number of written pieces that show “Quanturv” to be “Quantave,” but not once is the word “Quanturv” uttered. Another example is the character “Nelo” as she is introduced as “Nelo” but written in dialog as “Hero” though shown that it is “Nelo” next to her avatar when she is speaking.

The same goes with others like “Sharloon” or as she is also referred to as “Sharlunn.” Honestly I would expect to see this sort of translation out of an amateur fansubbing of a sub-par anime series; not out of one of my favorite developers and published by one of the greatest publishers on the planet (Tecmo Koei brings some of the best games West and I love them for it). Normally a slip here or there can be forgiven, but when it is pretty common to see things like the following image, it tends to become more comically sad than entertaining; sort of like hearing one of your preferred players on your favorite sports team just up and quit. 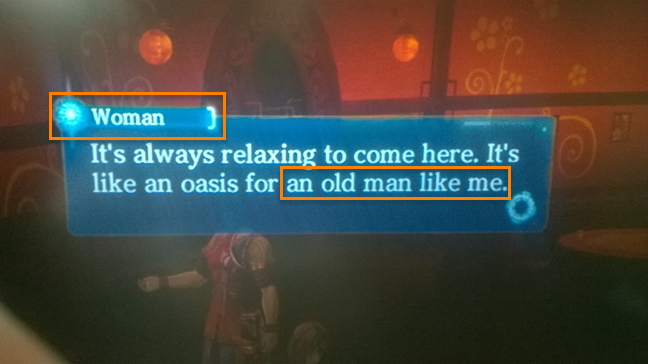 Now that the laughably terrible translation has been mentioned, on to the real stuff. Ar nosurge: Ode to an Unborn star draws heavily upon sci-fi based anime with radical outfits with its share of fanservice and loli’s so for the faint-of-heart or those that just cannot get into anime-inspired art (shame on you), I would recommend you stay away from Ar nosurge. If you are more like me, though, where you are a massive fan of the anime art style and am a sucker for sci-fi, playing Ar nosurge with throw you into a well-developed world of high science fiction and goofy chibi-style art aesthetics (in some areas).

One minute you could be moving through a dark, futuristic, and overly oppressive area and you will then step into this 2D, drawn-like-a-child ‘map’ that has a chibi Delta running around on it. While the break between aesthetics would be jarring and near-painful in other titles, the story and gameplay of Ar nosurge actually makes this crazy switch work and work quite well. A few little things did get to me, one being that the character’s shadows don’t start at their feet, making it look like they were floating; it is a very basic thing and one that can be absolutely absurd, on top of the fact that it really seems to impress upon gamers that the developers are lazy. I know, from the quality of Gust’s other titles, that they are not a lazy development team so I am not entirely sure why things like this were missed; it is a simple concept and quite the missed opportunity. Another less noticeable issue I had was with the syncing on the lips; Ar nosurge has dual audio tracks, English and Japanese and more often than not the character’s mouths are so off track (or not even opening/closing) it is distracting and difficult to tell who it is that is really even talking.

I had my sister over, a recent convert to the wonderful world of anime and she was unable to pick up the distinction in seiyu (as I was, though I am a veteran anime viewer) between one character and the next so she could not tell who was talking due to the tracking being so off. It was actually quite terrible, which literally pains me on a physical level to say, since everything about Ar nosurge plays to my wants and needs as a gamer. I can say, though, that both the English voice actors and the Japanese seiyu as of the highest quality, a trait common in Gust titles as well as other Tecmo Koei franchises. Excellent scripting as well as a fantastic soundtrack round out what is actually a really good game with some glaring problems. Maybe a patch will come to address some of the crazy framerate drops (seriously, running up a flight of steps is so jittery I don’t know what to make of it) and floating shadows issues, though I doubt it. 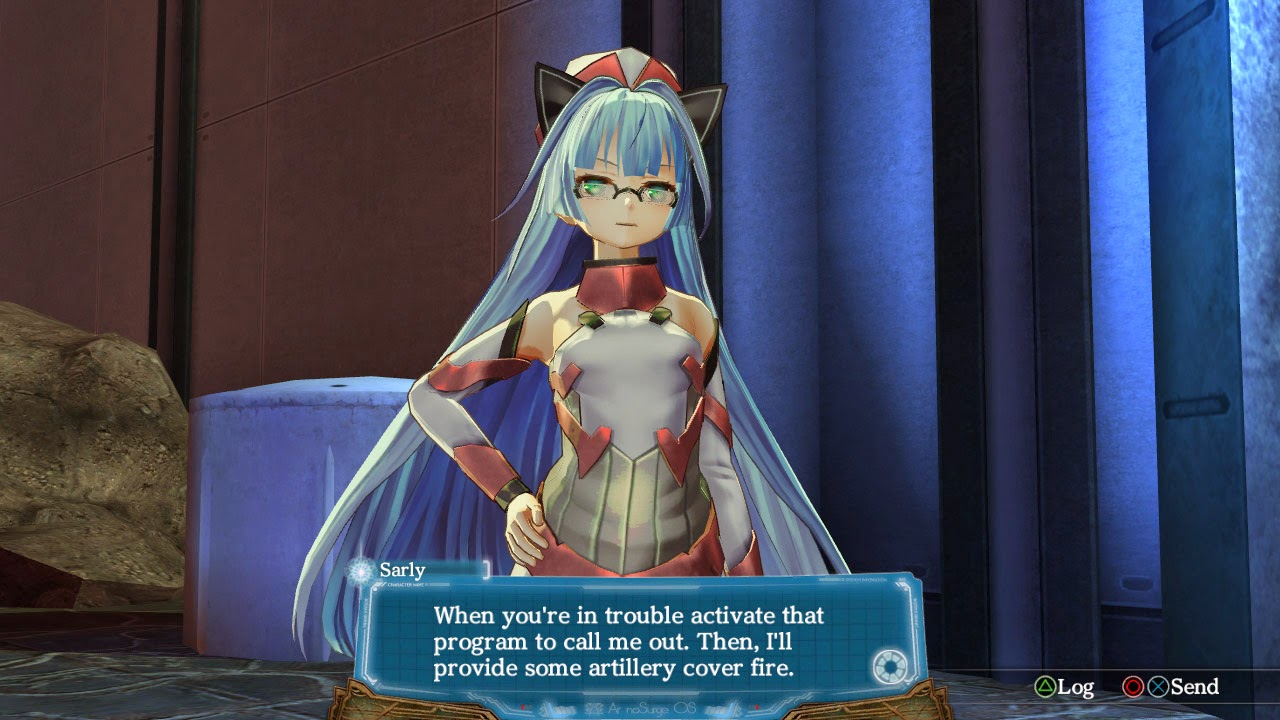 Ar nosurge: Ode to an Unborn Star is not a title for technical prowess though; it is a life simulation roleplaying visual novel game (set in the Japanese style) which means it is about substance rather than what is on the skin and frankly there is a whole lot of substance here. For every technical fault there is a flawless twist in the story. For every out of sync audio track there is a deep and meaningful bond between you, Delta, and one of the supporting characters. For every mistranslation there is an action-packed battle waiting to happen. In short, Ar nosurge more than makes up in terms of sheer storytelling and gameplay. Yes, the combat can at times be redundant but that is fine, as it is relatively sparse and is only a tool used to get your characters from point a to point b.

The real shining beacon in Ar nosurge is the connections between the characters. You will watch a young man, confused by actions he does not remember taking, not only learn more about himself, but gain a deeper and more touching understanding of those around them. From their fear of him for his past actions to their own insecurities in dealing with a friend that betrayed them, the core of Ar nosurge: Ode to an Unborn Star is not action or grinding, it is the discovery of one’s self and the consequences your actions have on not only yourself, but those around you. I do not know if I have ever played another game that made me reflect more on myself and my own choices as I have in Ar nosurge. While the tones and morals are very heavy and are very mature, Gust throws in plenty of comedy to those that are fans of Japanese anime/manga/video game culture. As an example, early on in the game you come to a place where the Tsun Kingdom and the Dere Empire are waging a war; fans of anime will immediately pickup on the character type “tsundere” which is someone that, while having feelings towards someone, tend to react in oft-violent outbursts towards the object of their affection. 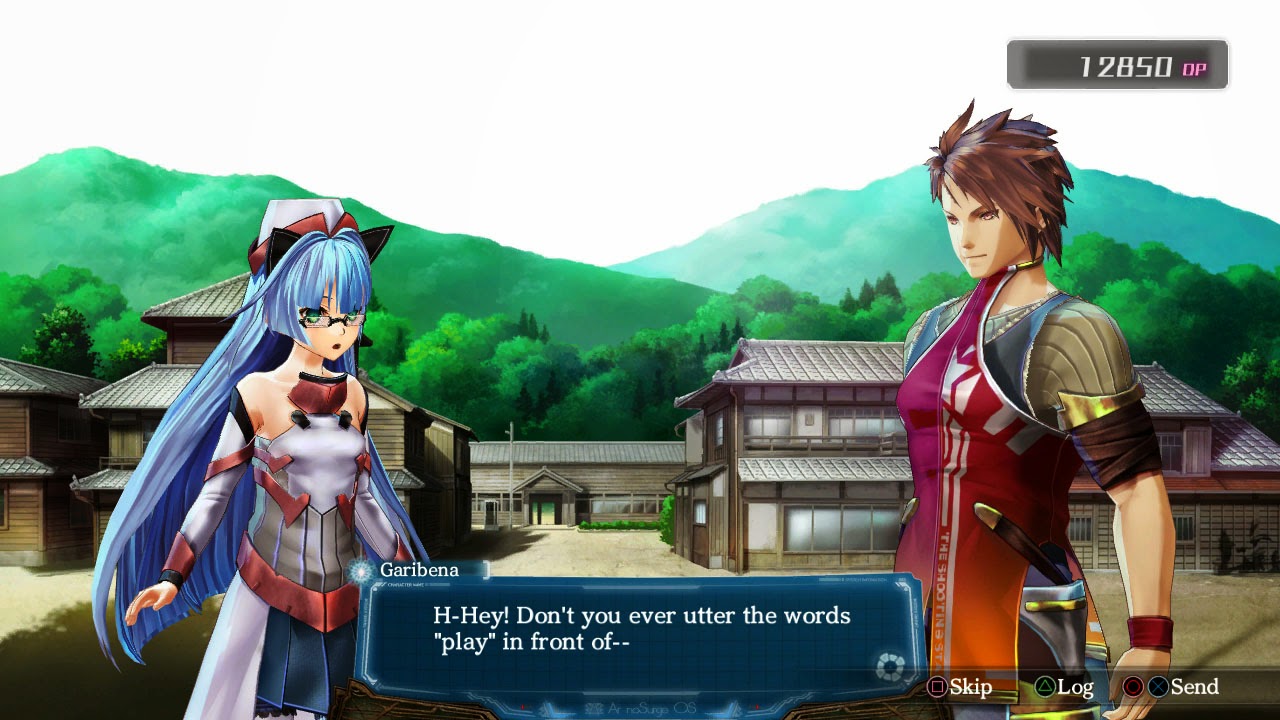 One of the more common terms used by a “tsundere” character will be “baka!” followed up by some sort of physical assault; some of the more well known tsundere characters would be Langley Asuka from Neon Genesis Evangelion or Asuna from Sword Art Online (my personal favorite). Ar nosurge is full of those tropes and plays them all off very well; if one sits back and looks at the title after completing it, Ar nosurge: Ode to an Unborn Star can actually be seen as something of a harem-style game that explores far more than sexuality, but rather the connections that one has with others. Truthfully it is one of the more touching titles I have seen and certainly one of the most touching to come out of Gust in some time.

While there are some glaring technical problems, Ar nosurge: Ode to an Unborn Star is the perfect example of the now-old adage that “graphics aren’t everything.” In a game where shadows do not start at the feet, but rather quite some distance away, and where lips do not sync up with the audio no matter the language, Ar nosurge comes back in force with a story that is amazing, touching, and thought-provoking. Those of you, like me, that are fans of all-things-anime will find a special joy in the art style as well as the common character types, settings, and sayings that are found throughout the worlds of Felion and Quanturv (Quantave?).

On the fringes of the gaming world, fans of the JRPG genre can find something to enjoy in Ar nosurge as can the fans of the visual novel genre or the life simulation genre. Truthfully anyone that is a fan of Gust’s other titles will certainly be a fan of Ar nosurge: Ode to an Unborn star and outside of some technical difficulties, any gamer with an open mind and the ability to stomach absurdity will certainly enjoy it as well.