So once upon a time there was this awesome game on Windows 3.1… yes ladies and gentlemen, 3.1, called Bang! Bang! My brother and I spent days playing this against one another. It was a simple turned based versus game that set two players against each other with nothing more than angles and velocity to destroy the other. Cannon Brawl is a sheer brilliant game that takes that concept that has been put to the test over the years and combines it with RTS elements raising not only the strategy bar, but also the level of attention that a player has to have if they do not want to be demolished by the enemy. 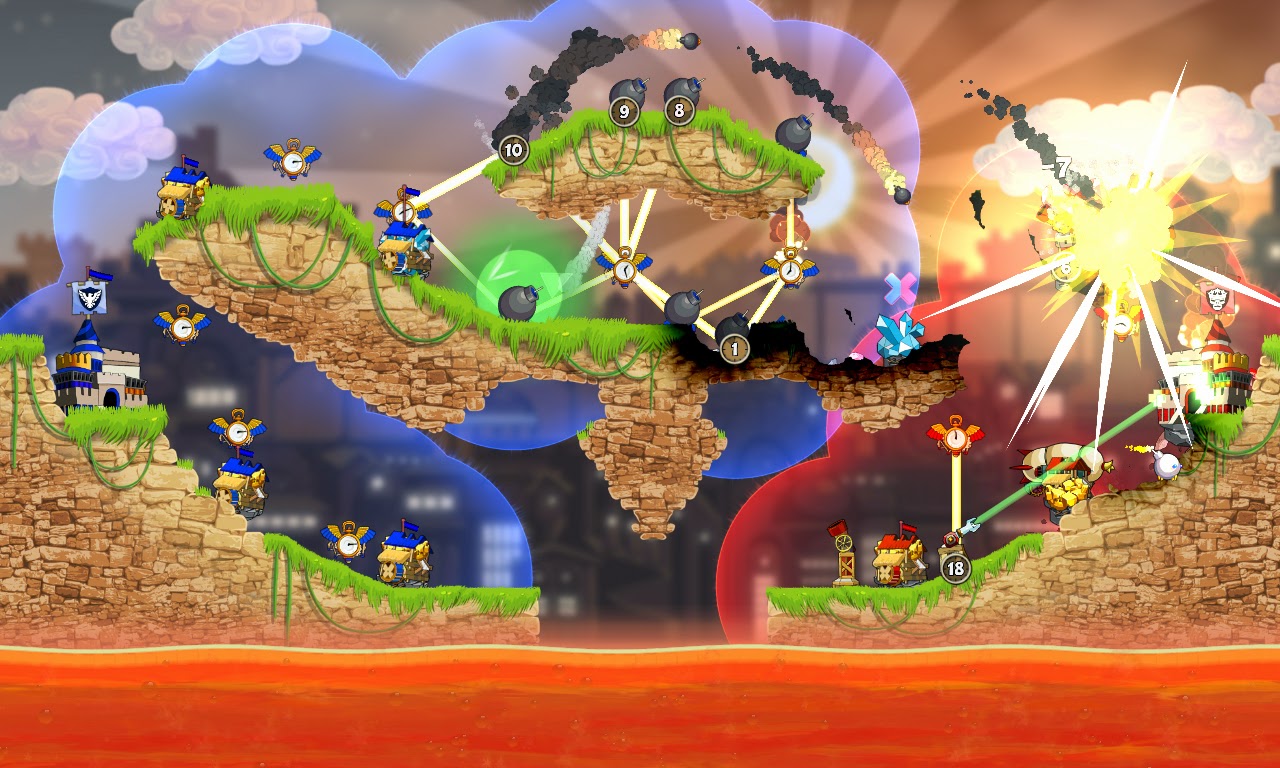 Cannon Brawl is the tale of a kingdom’s civil war as the main character’s uncle decides that he should be the one to rule as king and sets out to make it so. Requiring resources, allies, and armaments to face off against her uncle, our main protagonist sets out on her airship to start her campaign to save the realm. The story is surprisingly a light and funny one in light of the theme of war which can sometimes bring down even the funniest of attempts. The various characters and dialog all carry a light feel to them as the levels go by and new forces are added within every mission making each of these levels a new experience.

Gameplay itself is an interesting blend of the turn based ballistics which meets up with RTS elements. This allowed players to use the resources that they gather to to install new towers  either rain down fire upon the enemy of shield yourself from their would be raining fire. Players  have only one objective which is to destroy the enemy castle while keeping their own intact as you fly across the battlefield setting up the various elements that will hopefully grant you your eventual victory.

Cannon Brawl uses an interesting method as to how to players can go about setting up their towers. Each tower must be held within the player’s sphere of influence that is shown in the shape of a bubble that spans out from their castle. While this bubble might not be the largest, players can set up air balloons that increase this range which allows the installation of new towers and your gold mines (resource gathers) to be placed further and further away. This groundwork is essential to install not only as fast as possible, but also as securely as possible because it will pave the road to victory or defeat. I used the word groundwork because every level is on floating pieces of land over the ocean which can be destroyed allowing anything built on this ground to plummet into the ocean destroying it outright. 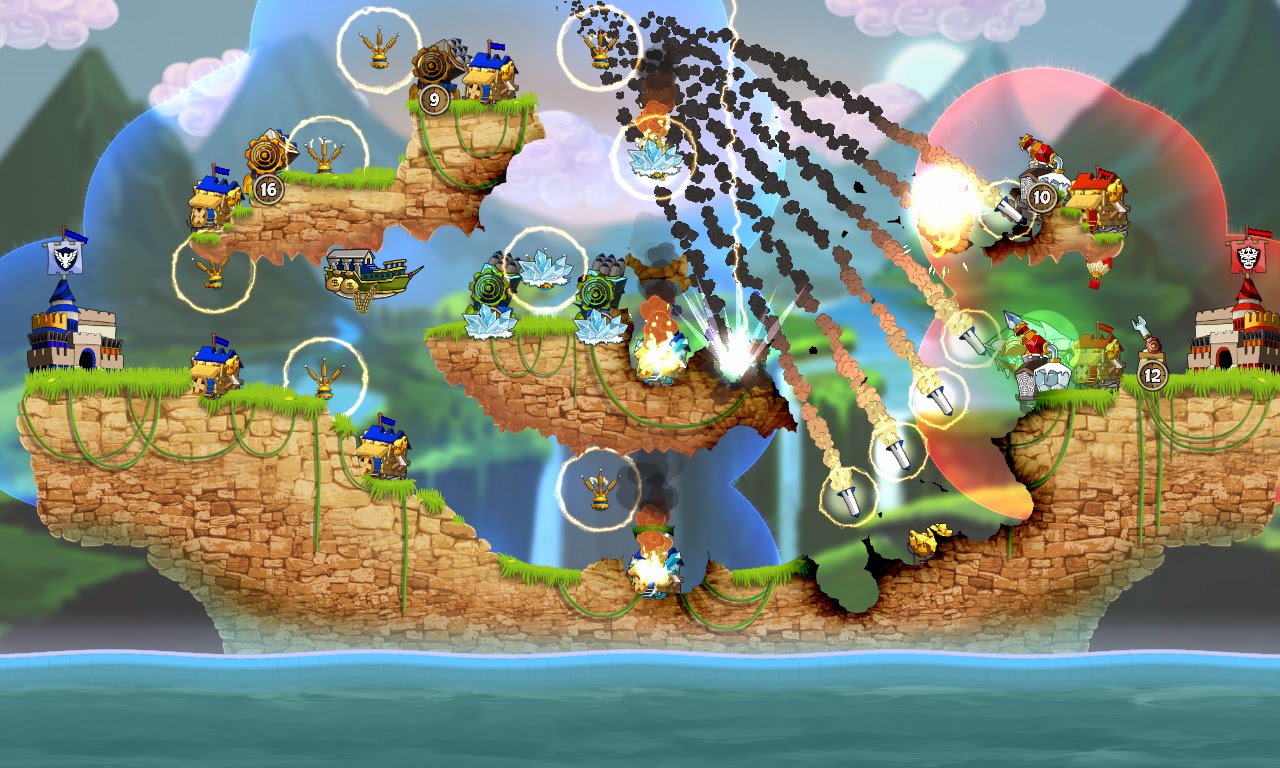 Along with managing your resources and putting everything into place, every new piece of equipment that can be put out onto the field not only has to be placed within your sphere of influence, but each and every one has to first be purchased and picked up from your castle. This means that regardless of if this is a new tower to launch cannon balls, volleys of missiles, laser beams, walking bombs (I think this one was super mario bros. inspired), or shields in order to stop incoming fire, players must fly back and forth from the castle to the point that they wish to deploy which is the key to everything. Efficiency lies in how players not only place, but also pick up and upgrade these various building. This alone would have kept players busy enough but it wasn’t even the best part. Each tower, regardless of its function, must be “docked” with to use. This means that every time that you need to fire, you need to dock, aim, then fire. Each tower type has its own cooldown counter until the next shot which in more ways than one needs to be calculated if they are to be used properly for the given situation. All of these elements combined make Cannon Brawl a very fast paced game that even the slightest miscalculation or zoning out can end the battle.

All of these faced paced elements can be found within three various modes. The first, which is a good place to start, is the story mode where players learn the basics and unlock the standard tower set as well as other pilots with different abilities as the story progresses. The second mode allows for players to have matches against an enemy AI. This mode, while not granting anything to players in terms of towers or pilots, does grant experience points for the victory. Players ending a match in defeat should not worry as there is still a small amount granted for defeat. Experience points can be used within an armory to unlock more powerful buildings for players to use as well as other pilots. It should be noted that unlocking these is not cheap, but nothing worth having ever is. Challenges that can be found throughout both modes such as “break xth amount of enemy shields” or “sink xth amount of buildings into the water” yield larger amount of experience points for players and are more than worth doing. The third and final mode, is multiplayer. 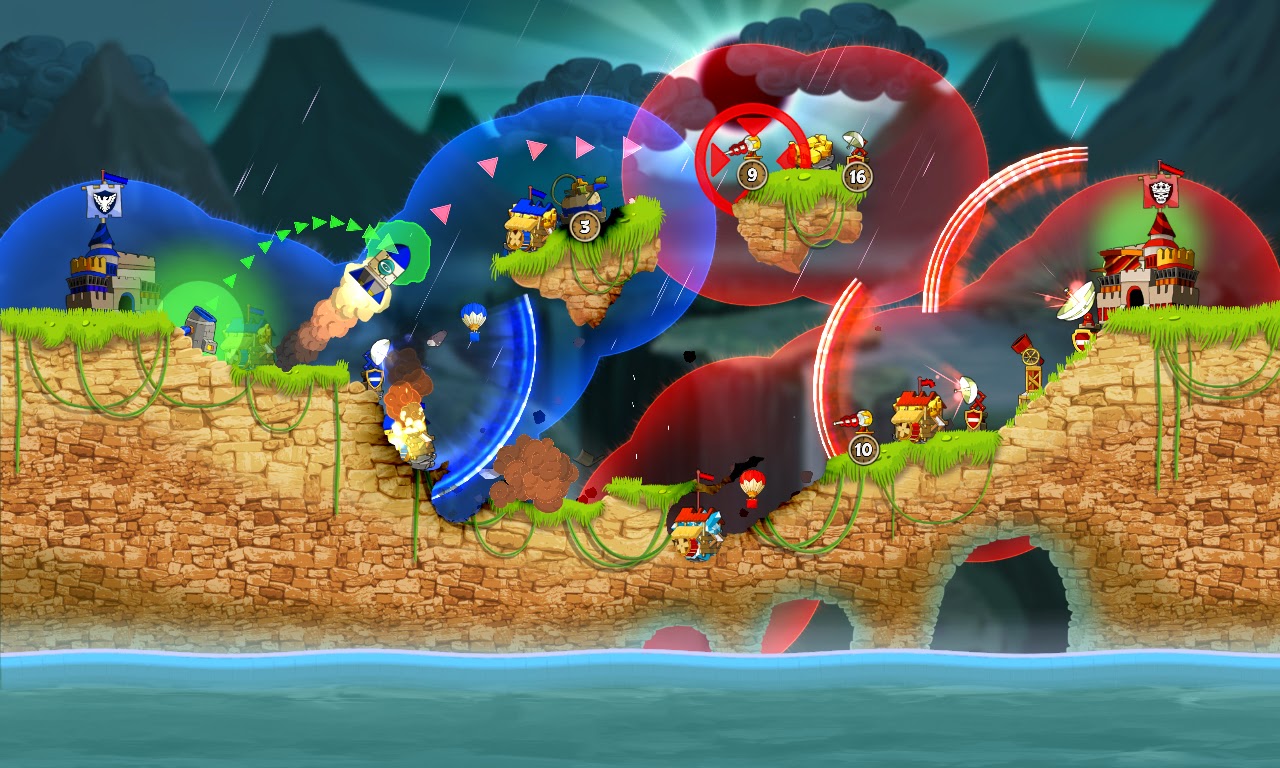 Multiplayer matches take everything that Cannon Brawl has to offer and puts it online versus other players in either ranked or unranked matches.

I was thinking that I had been doing fairly well, went up against the higher difficulty computers, and nothing prepared me for another player being able to think outside the box and completely demolish me. It was fun. Not only was it fun, but it also helps you get better by seeing the types of moves that another player will put into action. The last little feature I wanted to leave to here because it’s here that it makes the most sense. Prior to any level or match both on or offline, players make their selection among their currently available building / towers and pilot that they want to use. These choices can change the dynamics of a level or match significantly depending upon what the players has chosen and thankfully there is no right or wrong combination, only mad scrambling to try to make something work if one of their towers has you at a disadvantage. It’s not over until your castle goes up in smoke… or sinks into the ocean!

Cannon Brawl not only brings back fond memories of a time gone by, Windows 3.1 I still miss you, but it also takes an old idea and adds a very well thought out and designed spin making it one strategically faced paced awesome experience regardless of being on or offline.