When I built my first computer back in 1998 using a new Intel processor called the “Celeron” I felt like I was king of the computing world. I had a dial-up connection with 28.8 KBps and a whole bunch of games ranging from Warcraft II and Starcraft to Tribes and Half LIfe to Diablo and Baldur’s Gate; all of which I could play on my screaming new machine. So back in those days you had wicked fast Pentium III or AMD K6 II processors, U.S. Robotics modems, 128MB of RAM, a 3.5″ floppy in addition to your Iomega Zip Drive and the stunningly fast 40x CD-ROM (note that I did not say “CD-RW” ); man those were the days. My 15″ CRT monitor could do 1280×1024! With my Matrolx Mystique AGP graphics card I was the absolute bomb; heck, I could store TONS of data on my 10GB hard drive. Imagine my long-forlorn sigh for the technology that was … Man I miss those days. So the real pride and joy was my “corporate camouflage” tower and it was one of the first commercially affordable towers (as opposed to the desktop cases) and would fit in right at home in any mid-to-late 90’s cubicle farm. 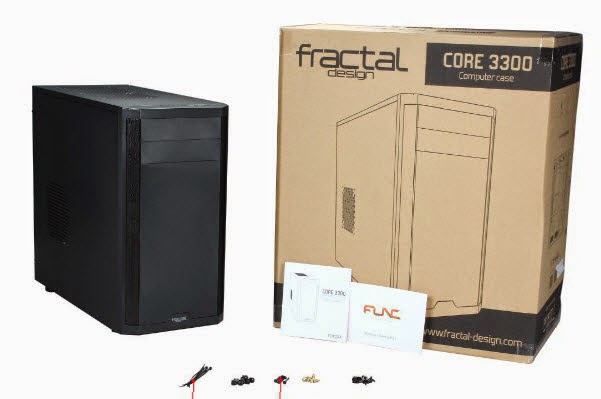 The only decoration was a giant blue button on the front, just below the two 3.5″ bays, that had a big I/O button on it; below that was perhaps the worlds smallest reset button. I actually had to use a mechanical pencil to reset my computer because nobody on the planet has hands the size of a G.I. Joe toy. Needless to say I have been in the custom-built computer world for a good long while and have had some hideous “gamer” cases and some ultra-classy sleeper machines. In my old age I lean towards functional, affordable, and stylish as I do not want some behemoth sticking out like a sore thumb, taking away from the gaggle of game systems, monitors, televisions, audio equipment and all other forms of electronic awesomeness. Enter Fractal Design, a small computer case manufacturing company out of Sweden that takes inspiration from the Scandinavian greats like Georg Jensen and Bang Olufsen (huge fan of Bang Olufsen) and their design aesthetics. Is Fractal Design able to pull off both functionality and style at an affordable price that is easy to work with? Read on to find out more.

Rather than boring you with about twelve million facts and dimensions about the Core 3300, a mainstay in the Fractal Design CORE lineup of cases, those of you looking for specific dimensions, take a quick look at the fact sheet image below this quick little note on the case and how we will review it. Since we at Chalgyr’s Game Room consider gamers to be from all walks of life, not everyone will be absolutely bonkers for the techno-babble that can appear in some ten-page long reviews; instead I will be taking you through the steps and experiences that I came across while working with the enclosure. Just a normal gamer reviewing a piece of hardware; there is no real need to get into a page-after-page review; but for those that are interested in some of the technical aspects, here are the dimensions: 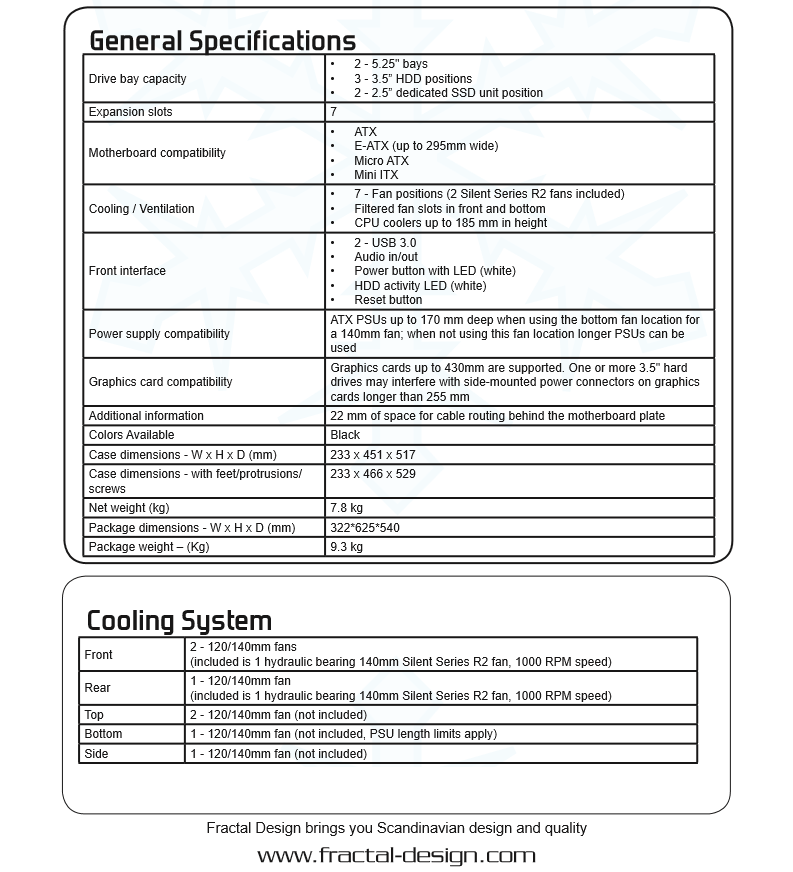 One thing to note about the Core 3300 is the width at 9.17 inches wide (or 233 millimeters), when compared to other more expensive models, like NZXT’s H2 (an enclosure I adore) the NZXT is only 8.46″ wide. Believe it or not that extra near-inch is a huge game changer and I was utterly stunned how much room I had on the inside of the case. With that extra inch I was able to easily negotiate any component I had while inside the case; not only is the case extremely open and easy to work in, but the ingenious design is, well, ingenious. On the back of the motherboard plate there are there two slight-inset sections that are designed for solid state drives.

Being able to tuck a could of extra SSDs in the back is excellent but what makes it even better is that they are super easy to get to if you ever need to replace them as you just need to remove the off-side case panel and boom, they are right there. Speaking of hard drives, the Core 3300 has this amazing vertical stack for hard drives. The way that it works is rather than a traditional stack, Fractal rotated the drives 90 degrees then turned them 90 degrees; this allows the two massive fans in the front to push all that hot air straight past the power supply and the video cards and right out the rear of the case. With the drive rotated (so they “point” back towards the rear), space is conserved allowing for much larger components or for significant modding. 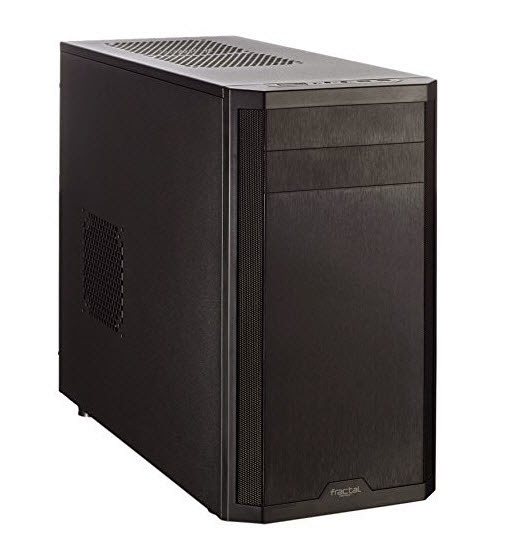 Keeping the cables out of the way is a breeze with the rubber grommets and super-open feel of the case. In truth you have to try really hard to make the inside of this case look cluttered; there is an absolute ton of real estate so you will have plenty of room for your gear. What is best is that after packing all of my gear into this pocket-sized computing mansion is that it runs cool without using the numerous slots for radiators. I used some older ball-bearing white 120 / 240 fans that I had laying around (to go with the provided white case fans) and set up some excellent negative air pressure and was pumping heat out of the exhaust in no time. With the ample fan space and the strangely compelling Teflon-like text, heat was dissipated quickly and efficiently (under load with an AMD 965 Black OC’d with some ThermalTake thermal and a silver heatsink, my XFX Radeon HD 6950 a single single solid state drive, and two spindle drives cooking I was at about 88 degrees Fahrenheit).

Adorning the entire case is this super slick, matte black coating that reminds me of really fine Teflon. Being lightly textured, the panels are easy to grip and that same texture seems to deflect the light giving off the same raw appearance that the Lamborghini Aventador (google it; you will be pleased) while keeping clean and sophisticated lines. The slight beveling of front of the case gives both depth and character, setting it apart from the pack of flat-faced computer enclosures while not protruding so much that you feel like you are watching a cheap early turn-of-the-century D-list actor alien movie.

Given the extra real estate inside you will have a larger footprint and while the Core 3300 is what most would consider a “standard” case, it runs larger so gamers or computer aficionados that are tight on space may want to look beyond the Core 3300. The power and reset buttons, along with ‘front’ USB and audio ports are actually on top, which is common with the going trends and is flush with the top panel yet easy to get to quickly for those rage-quitters looking to slam on a power button. The brushed aluminum look that is the color of anodized steel that covers the fascia is both attractive as well as pleasant to the touch. 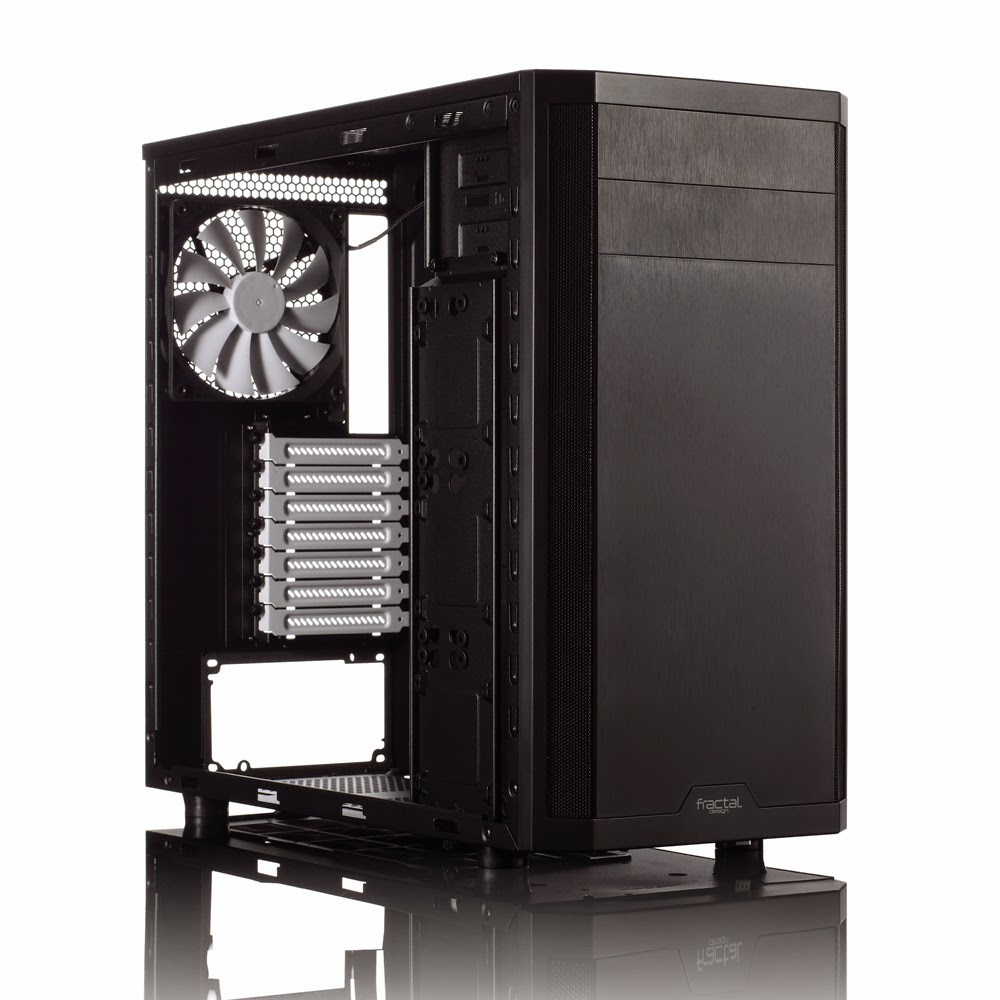 Overall I was absolutely blown away (literally since those fans push a ton of air) during my build with the Fractal Design Core 3300. Placed right in the middle of their CORE lineup, the 3300 is a beaut and a wonder to work with. Little folk, such as myself, could nearly climb into the case to work on it which left ample room to move your elbows. All too often an enclosure that is trying to conserve space will go through and force you to be a contortionist in order to add or switch out components. Fractal Design’s take on enclosures ensures that you will not need to bend into a pretzel in order to work with your components and not only do they provide you with ample space to work in, they do it in style.

The one thing I did find was that it lets out the hum and whir’s of the fans and components and some sound-insulating foam would be nice, though tricky given the vertical hard drive bays. While I have been using Cooler Master and Lian Li cases for the majority of my adult life and some years ago, Fractal Designs piqued my curiosity. With the Core 3300 it has gone from mere curiosity to pure interest and a desire for more of their designs. Clean cut, user friendly, superior construction; the Fractal Design Core 3300 has it all.