Grizzled ex-cop.  Murdered wife.  The murder is tied to the newest street drug.  At times, the drug is described as having “divine” connections.  Law enforcement may not be trustworthy.  Our protagonist’s two main hobbies seem to be drinking and moping.  He also seems to have supernatural reflexes and powers.  Max Payne, right?  Not this time.  This time it is D4: Dark Dreams Don’t Die by Swervy, whose previous game was Deadly Premonition on the 360, PS3, and PC.  And that is where the similarities end. 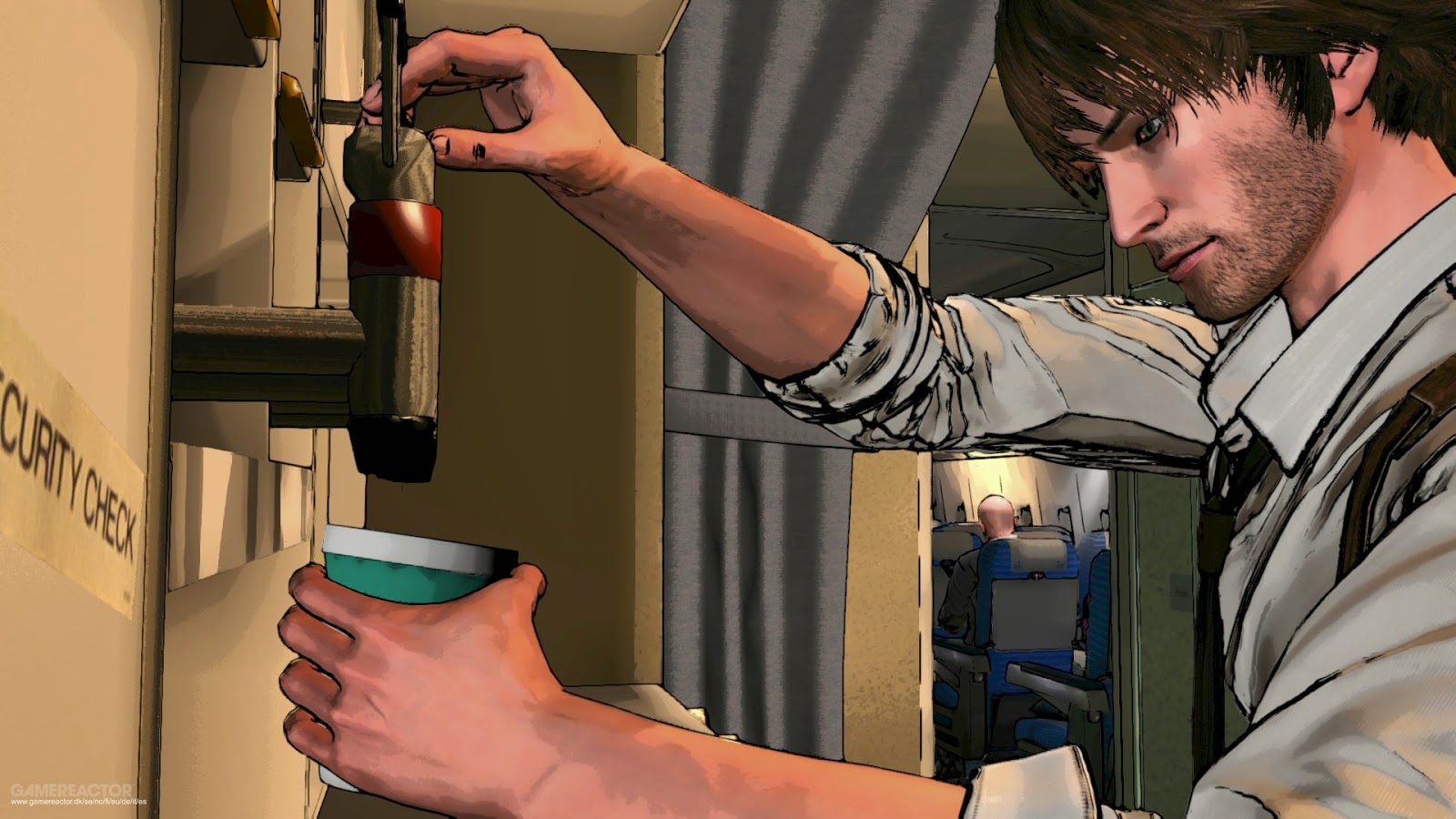 Being a fan of Max Payne since the first game, I thought the similarities in the high-level plot synopsis was a bit odd.  I mean, how many people out there thought that Max Payne needed to be re-done as a point-and-click cel-shaded adventure game with quicktime events (QTEs), Kinect controls, and over-the-top Japanese styling?  Yeah, me neither.

But honestly, those similarities are really pretty standard conventions for the gritty noir genre.  Had they stuck with the same monochrome palette and pouring rain as most noir-influenced media, it would’ve felt a lot like Max Payne.  Instead, though, they went against the mold in almost every way possible.

The color palette is bright and varied.  I’m a fan of cel-shading in general because I find it that it holds up better over time than more “realistic” graphics.  It’s kind of like special effects.  Watch some early 90s movies that had state of the art CGI at the time and they can be pretty cringe-worthy today.  Watch Batman: the Animated Series and it still looks awesome.

The game makes extensive use of Kinect motion controls, but they aren’t required.  The Kinect controls are pretty responsive, although I did occasionally have issues with the “grab” command.  Reading online, not many other people seem to be talking about that same issue, so it could just be that I need to re-calibrate my Kinect.  The “grab” command is one of the main ones you use, though, so I played most of the game without the Kinect.  The non-Kinect controls can be a little goofy, but they are usable.

The biggest issue with the controls is that they still haven’t been able to solve movement with the Kinect. They can’t have you wandering around the living room trying to move through the environment, so the solution is go way back to old school, grid-based movement.  You move forward one square at a time and can rotate to the four cardinal directions.  Go too far?  Move left, then left again to turn around, and then move forward again.  They try to get a bit cute with it by adding in a “lean” function (using LB/RB if you are using the controller) to hide some collectibles in the corners. 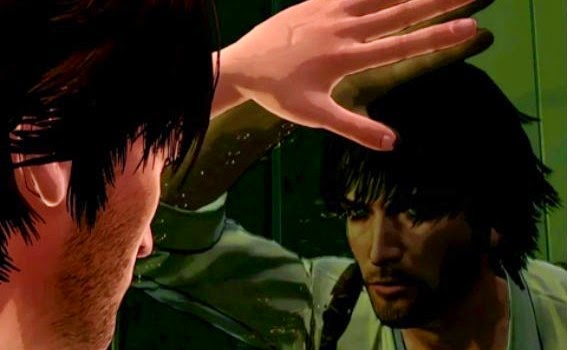 And the majority of the game is point-and-click, “find something in the environment that can be interacted with”.  The protagonist, David Young, has a special “vision” ability that lets him highlight the different things that can be grabbed or pushed and where the next clues are (does he have ancestors that were Assassins?).  Using vision is limited, so you can’t use it all the time, but you can restore it by drinking water, coffee, or tequila.

The game does try to do a couple of things to shake up the adventure game genre with mixed effects.  To discourage you from just wandering around clicking on everything, you are given a stamina bar that shrinks every time you take ANY action.  Asking someone a question takes stamina (considering some of the characters, I think I would be drained talking to them in real life, too).  Moving one step takes stamina.  Opening an overhead bin takes stamina.  Looking at a magazine takes stamina.

You can get stamina back by eating food, which makes for some interesting moments.  David doesn’t think anything of going into people’s luggage and eating something out of it.  Or hey, there is a burger left in the airplane microwave…Yum!  Or you can buy food from your cat.  Did I mention the game was quirky?

At the end of the day, though, running out of stamina isn’t that bad.  Your character passes out, and loses some money, but you don’t lose any progress.  Once I realized that the penalty didn’t seem that bad, I stopped caring about it.  There’s generally enough stuff laying around (mmmm…jelly beans off the floor!) that you are usually fine anyway.

The QTEs are spiced up by coming in “stunt” sequences where they come rapid-fire and give you limited time to react.  Mechanically, they are exciting and tough to execute perfectly.  The first couple of times you encounter them, it takes a few seconds to even realize what you are supposed to be doing.  Each of the QTEs themselves cause David to do some wild Jackie Chan-style stunts while fighting some of the game’s antagonists (or again, the cat).  The sequences are stunning, but you end up so focused on the QTE itself that you almost can’t even see what is happening (and certainly can’t appreciate it).  I imagine they look pretty sweet for anyone watching you play. 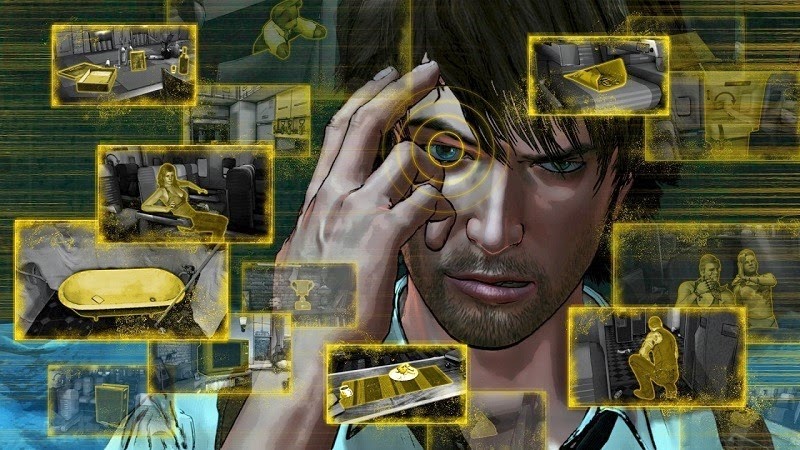 The story has its ups and downs.  The mystery about David’s wife and what happened on the flight can be interesting, but has some odd bits.  Thanks to a cryptic deathbed message, David thinks anyone whose name starts with D is a suspect.  That seems like an odd leap, considering there is no indication that the “D” in message is even referring to a person.  The individual clues that David finds that drive him forward seem to make sense individually, but require a bit of a logic leap to connect them.  Luckily the story does that for you.  I find it interesting when David says he’s got it and makes all these disparate clues come together.  I anxiously await the end of those sequences to see just what the heck is happening.

I’ve made a couple of mentions about the game’s quirky tone.  That really comes from the over-the-top characters, which include a fashion designer dating a mannequin, a fugitive with a false eye, muscle bound flight attendant with an interesting inhaler, a giant wearing a hospital mask who taaaaaaalks….verrrrrrrrry……sloooooooowly….and of course, Amanda.  Amanda is a scantily clad female that lounges around your house and brings you food and acts as your store.  She is also apparently David’s cat and her human appearance is part of David’s post-trauma hallucinations.

To me, that brings the most interesting aspect of the plot.  Sure, things get over-the-top weird with oddball characters.  Sure, the music goes from solemn, introspective, orchestral score to tense, cinematic music, to offbeat 70s-style groove.

But there are enough underlying hints that there is a little more hiding underneath, especially as you get into the second episode.  Can David really change the past, or is he just seeing it differently?  This drug “Real Blood” allegedly gives people superhuman powers….were David’s powers really triggered by his trauma?  Is his partner Forrest somehow involved?  He is certainly doing his own thing. 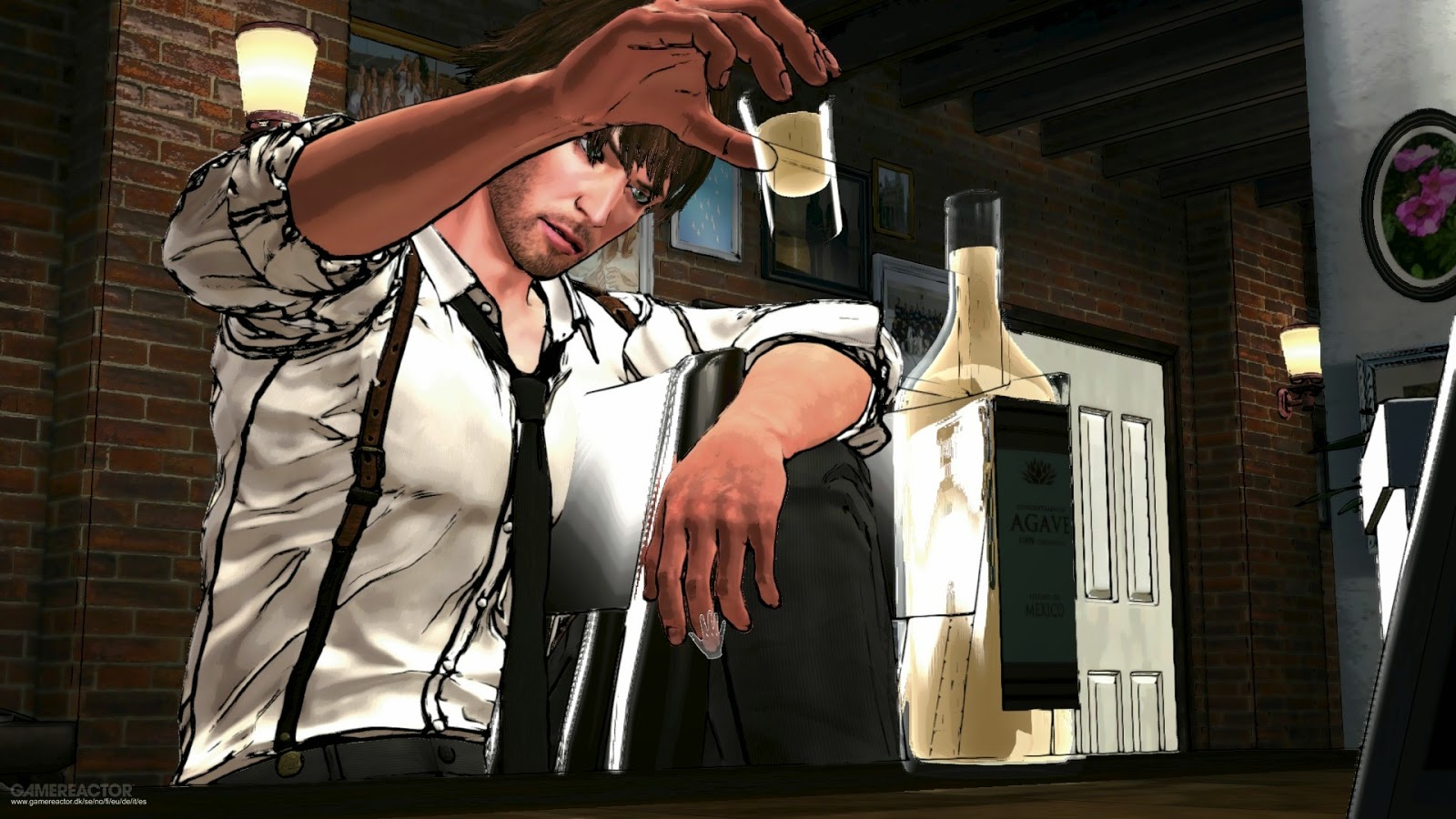 Voice acting is mostly okay but David’s Boston accent is a bit strange.

There are plenty of collectibles to find and the game scores you on how well some of your conversation choices are “in-character” (although I don’t really feel I know David enough to choose right every time).  Some mini-games/side quests and the stunt sequences are also scored.  It gives the game a little bit of replayability but isn’t anything to get excited over.

Episode 2 ends on a cliffhanger and it appears to be the end of “Season 1”.  Assuming the game continues with a second season, I hope that these subtle hints are explored and the questions answered.  It took a while, but by the end, I was invested enough in the story to really be curious how it is going to end.  Will David solve the case?  Did he kill his wife?  How many more trivia questions about airplanes do I have to answer?

Overall, the game is interesting, even if it sometimes is trying to be weirder than it really is. It has some interesting mechanics and I appreciate that they try some new things to break the genre conventions.  Some work, some don’t.  The quirky tone may turn some people off, but just watching a trailer or a clip online should tell you whether it is too surreal for you or not.  I’m invested enough in the plot that I want to see the next episode, even with some of the missteps.