In mid-August I had the pleasure of getting my hands on a preview of Endless Legend and as I mentioned, I was very excited; after all Amplitude Studios is the development team behind one of my favorite 4X games, Endless Space. Some months ago when I heard they were doing a fantasy-based 4X game I was understandably excited; after all I am a pretty big fan of the whole magic, fantasy races, etc. Plus, swords and maces and magic are pretty cool too. When I then hear that Endless Legend was taking place in the same universe/mythos as Endless Space I was even more excited; Amplitude Studios was going to create a fantasy game using assets and histories from Endless Space which is one of my favorite game of all times. 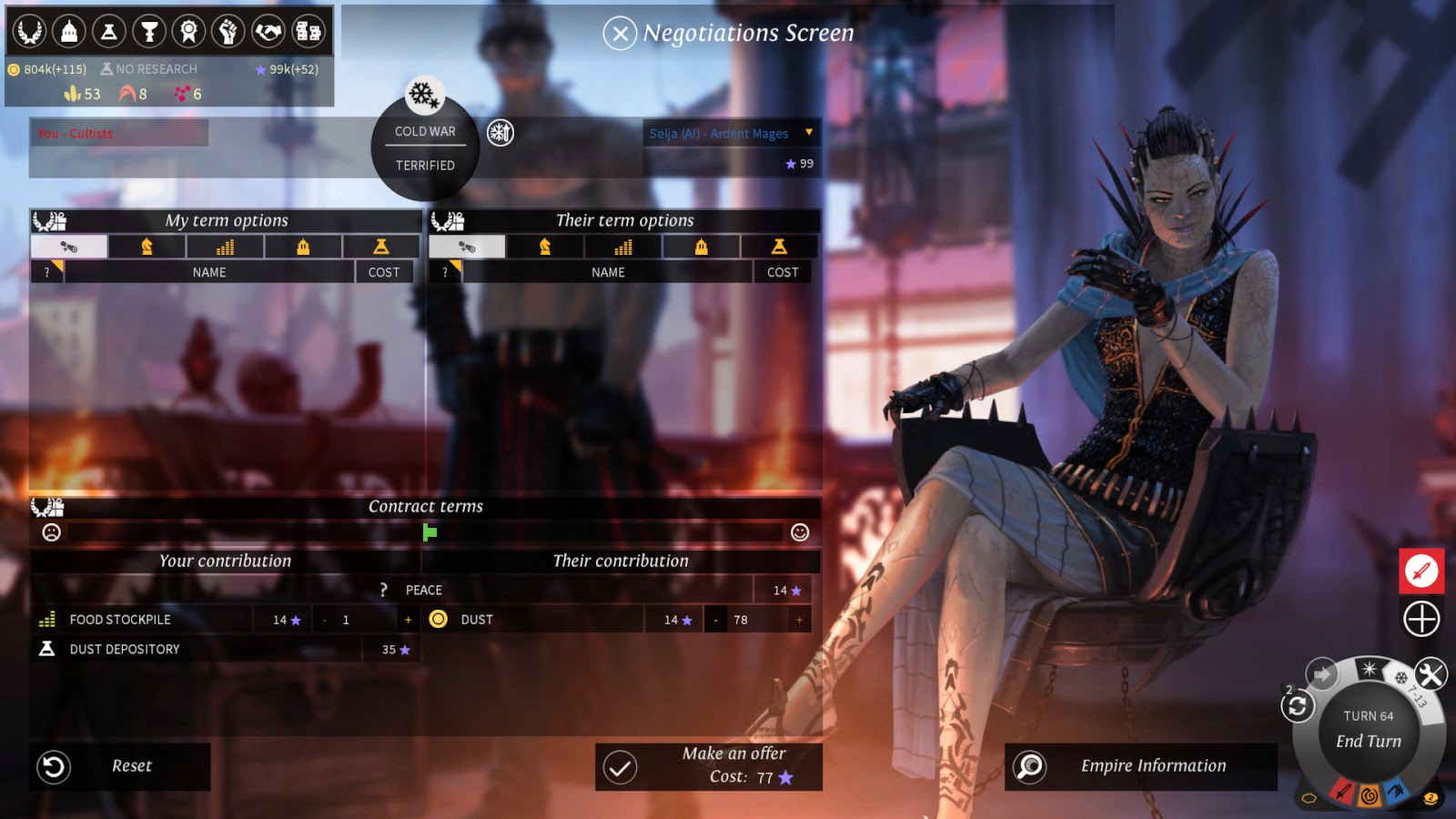 How could it go wrong? My impressions in my preview went on to prove that this would be a good thing, being a solid preview with robust roleplaying elements in a 4X strategy game, small side questing, and a gorgeous play board. Accompanied by a spectacular soundtrack I could find very little that I did not like in such a well-made Early Access game. Realistically they could have released the game the day I got into the Early Access program and it would have been a very solid experience but instead Amplitude Studios waited a few months, adding a few new races (including one fan-made race) and worked to solidify the experience; the question remains though, was the wait worth it?

As I mentioned in my preview, Endless Legend is a gorgeous affair; in all honesty it is likely one of the best looking fantasy-based 4X games that I have seen. Period. While the oil painting style of art and the 3D character models are great, the real gem in Endless Legend is the playing board. When you first load into a board the entire board is a matte gray, plain and unattractive looking pile of hexagons, once you start uncovering areas though, the field melds into this gorgeous 3D terrain with that morphs into varying heights with small but detailed tiles with different attributes. By “attributes” I mean more like features, as an example you may find some ruins or a small pond, or some other type of environment that is highly detailed even though it is packed into this tiny little tile.

When combat is initiated the board is enlarged and the hex changes ever so slightly as your units are arrayed in a fashion similar to a chess board; you can then move the units that were a part of that army in an effort to destroy the enemy. Animations are clean, crisp, and well done, if not overly exaggerated or spectacular; simple and to the point. Eat your heart out, Might & Magic games, it is no exaggeration when I say that this is one of the best looking fantasy 4X games I have ever had the pleasure of playing. The biggest issue I saw was more of an issue with my own hardware but during the map creation / menu selection sections there was a bit of a drop in frames (5 to 10 FPS drop at most) as the utterly stunning animated background art chews up resources. I would be hard pressed to think up a 4X game period, no matter the type (fantasy, space-based, etc.), that I have played in the last few years that had music as good as Endless Legend. Endless Space, one of my favorite games of all time, has great music; Endless Legend makes that music look like some local community wind instrument band full of five year old novices… Seriously, Endless Legend has some excellent music and I never once felt frustrated or irritated at the background music.

Sweeping scores and calming overtures keep your mind occupied as you work on discovering new content and warding off enemies, taking subquests and working on building your colonies. The ambient audio and sound effects are forgettable in the face of such an awesome soundtrack. That is not to say that the swoops, smashes, and “ahhhs” are not well done or that they cause some sort of problem with the game, as the audio sounds fine the way it is, but with such a great soundtrack there is no reason to even hear the other audio bits.

With the addition of a few new races (Cultists of the Eternal Ends, Drakken, Roving Clans), the final release of Endless Legends provides countless hours of interesting and challenging fantasy 4X gaming. Whether you want to play as something more diplomatically aligned, like the Drakken, a race of wise dragon-people, or if you are more interested in military rule such as with the Broken Lords (my personal favorites), you will be able to find a faction that will play the way you want to. 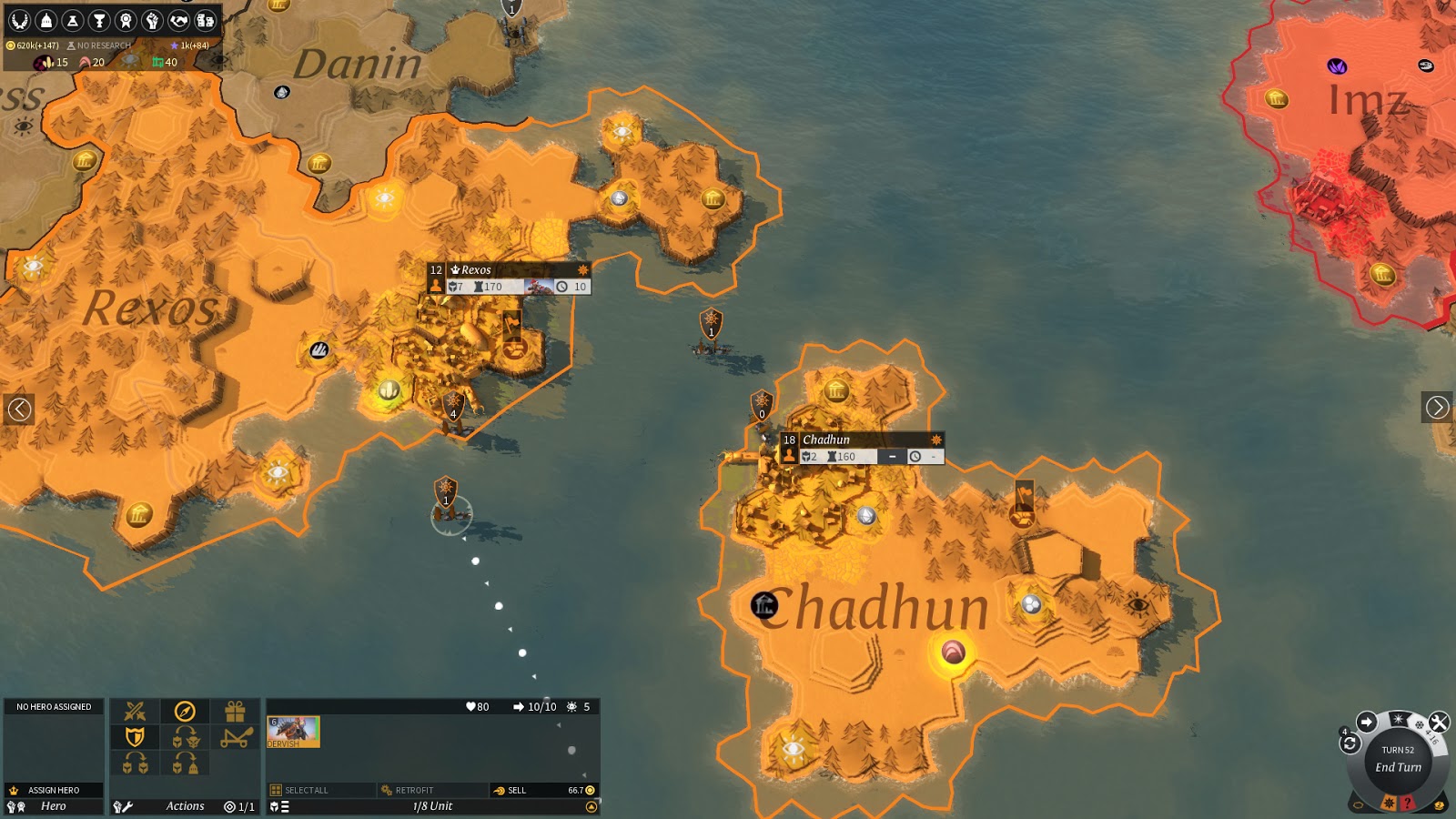 Maps can be small and tight and be over with in an hour or so, depending on your play style, or they can drag on for hours upon hours the way that my maps tend to do in a delicate dance of swords, diplomacy, and colonial rule. There really is a countless number of ways to play a map with an intelligent and challenging AI opponent, or an AI ally, and Endless Legend can fill many days worth of excellent fun.

When someone, myself included, mentions “4X gaming” a majority of us will go direct to the juggernauts like Distant Worlds: Universe, the Civilization and Europa Universallis titles along with more hybrid pseudo-4X titles like the Might & Magic franchise. Endless Legend could be comparable to all of them and none of them, though is most similar to the Might & Magic line in terms of style, but contains the Exploration, Exploitation, Extermination and the nation-expanding chops to stand up to the greats like the Civilization titles or Sins of a Solar Empire.

Endless Legend is truly an excellent title that brings gorgeous graphics, fun gameplay mechanics like the revisiting of ruins and dungeons to gather more Dust and other quest rewards, or to the deep and involved methods to manage both diplomacy and your colonies. Tying quality gameplay mechanics to an amazing soundtrack, Amplitude Studios has created yet another one of the best 4X games available today; I think it is high time someone has told Sid Meier to stand aside, that there is a new player in town, and I think that someone is Amplitude Studios and their spectacular Endless Legend.