I had not heard of Etekcity until a friend went on ranting about this super excellent and inexpensive mouse that he bought off of Amazon had brought them to my attention. I was immediately intrigued by the premise of a gaming mouse that did not cost an arm, a leg, and your firstborn child. When I reached out to Etekcity for a review unit I was surprised at how jovial and good-natured the folks were and even more shocked at how fast a unit was sent to me. You see I am used to waiting weeks sometimes to receive a unit and when you are excited to be reviewing a piece of hardware, well the wait can be atrocious. Fortunately within mere days I was holding onto the small box that contained the Etekcity Scroll Alpha High Precision, 8200 DPI gaming mouse and you can read on to find out more about the device. 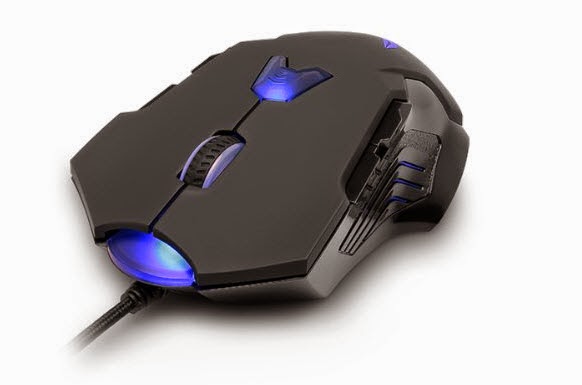 When I opened the shipping box I pulled out this very compact, open-faced box that had this wicked looking space-age mouse prominently displayed; I was a little shocked when I grabbed the mouse as it sticks a little out of the package and the whole front of the package came away and the mouse was just there, nearly falling out of the box. Likely a piece of tape fell off or was not stuck on, or rather, I hope since it could have been a big mess. Once I pulled the mouse the rest of the way out of the package I was pleased with the light weight and the texture of the mouse.

It has this sort of non-stick matte finish that lends itself well to long sessions of gaming and the overall look reminds me of the F-117 Nighthawk. With all of the sharp edges and angles, the Scroll Alpha also feels a bit rough under-hand and if you have small hands like I do then you are bound to run into a few of these sharper points. Even though the mouse is a large mouse, gamers with larger-than-average hands will also find sharp edges poking and prodding, pending on how you hold the mouse. While I have smaller hands and ran into a the sharp edges a few times, slightly modifying my grip and setting the mouse farther back in my hand alleviated any discomfort. While ergonomically the device is best suited for those of a more “average” hand size, the click response for each of the 8 buttons is excellent, though the thumb buttons do stick out a bit more and for heavy-handed gamers I can see that being an issue. Personally I have a light touch and set my sensitivity to near max while playing games (because lazy) so it never bothered me. 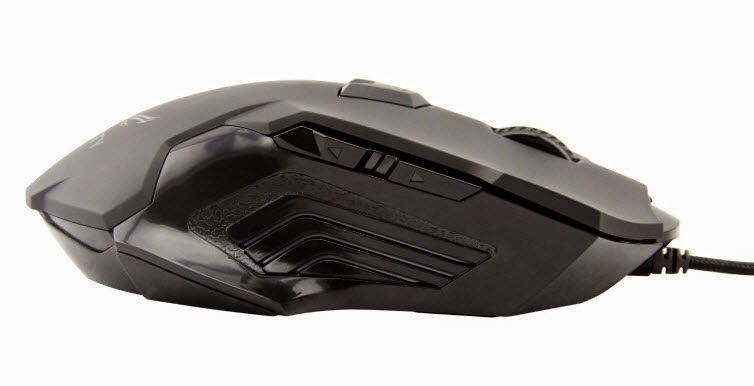 Aesthetics and ergonomics are only a portion of the experience of using a mouse; the other aspects are how well it glides, click response, and how well the mouse tracks. This is where things get a little ‘interesting.’ First, when it comes to gliding the Scroll Alpha handles drastically different pending on the surface you are using. The glide over my Razer Kabuto software gaming mat which is very thin and flexible is simple and light with a small bit of noticeable friction that was not so bad and while playing Team Fortress 2 and Counterstrike I could not tell the friction was there, only while browsing the web and minor mouse movements were in play.

When I switched over to my enormous Glorious PC Gaming Race gaming mat, well I noticed problems right away. Friction was massive; like the mouse was gorilla glued to the mat. On top of the crazy amounts of friction, the top of the bottom of the mouse (bear with me) has a sharp edge that your hand sort of sits on and acts as a platform for the mouse. It is a small lip really but a sharp one and it slides along the supple and plush surface of the mat and catches more often than not. With more vigorous movement I can imagine that the mat would have wear marks and even tears in it as the grinding was so pronounced; I stopped after only a few hours on the mat for fear of damaging it (I love that mat). When I used a hard-surface mouse pad (an inexpensive mouse pad by Kelly Rest), the Scroll Alpha moved like it was gliding along soft butter. 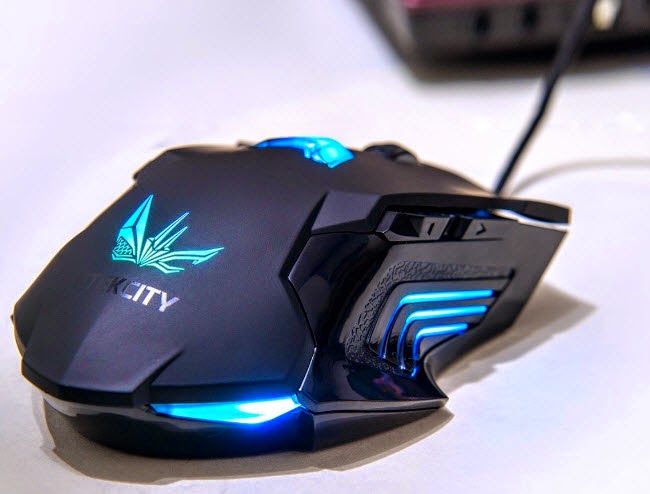 Clearly the mouse works best on hard surfaces and I strongly recommend paying for a premium hard gaming surface to maximize the gliding of the mouse. With all the money you will be saving on the mouse itself, you can certainly look to purchasing a quality surface. In addition to the actual motion, tracking was decent, though it was best on the Razer Kabuto, then the SRV by Kelly Rest and then last the enormous gaming mat by Glorious PC Gaming Race (likely due to the lip at the bottom) but for fear of damaging the fabric mouse pads, I would stick to a stiffer hard surface.

When it comes to inexpensive gaming mice you can quickly go from run-of-the-mill to crap in less then a nanosecond and fortunately the Etekcity Scroll Alpha is neither the ‘average-joe’ nor is it a glorified model boat anchor. With a look that is futuristic and atypically “gamer,” a capture DPI that is extremely high and accurate provided you are on the right surface, and a plethora of buttons, the Scroll Alpha is amongst the better budget mice I have used. In truth there are some mice that cost near twice as much that I have used that performed half as well. For those gamers out there that are working on a budget build, or simply do not want to spend a ton on their mouse, the Etekcity Scroll Alpha High Precision 8200 DPI gaming mouse is an excellent so head to Amazon and pick on up now.