We have been following Guilty Gear Xrd for a while now, and now that the game has a release date and some more information, it looks like we will be seeing it sooner than expected. On top of that, Aksys has announced their pre-order bonus. 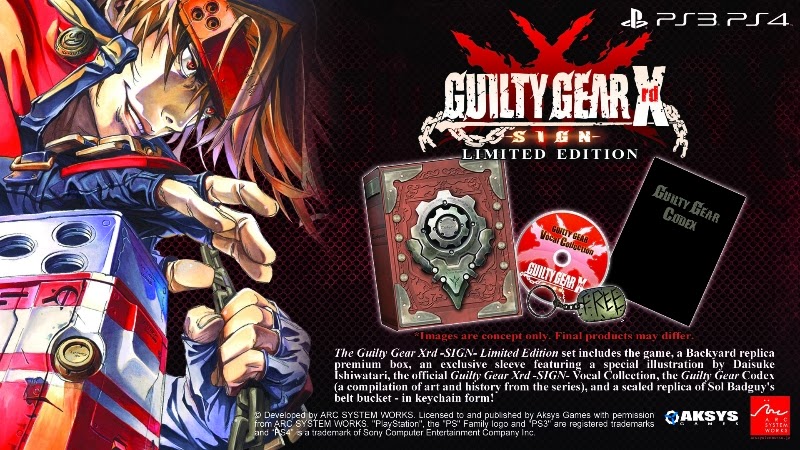 Aksys Games proudly announces that Guilty Gear Xrd -SIGN-, the newest, most innovative fighting game for the PlayStation®4 computer entertainment system and PlayStation®3 computer entertainment system, ships on December 16, 2014 in North America, just in time for the holiday season! Both the standard and limited editions are available for pre-order, so reserve your copy today!

In celebration of the game’s release, the DLC character Elphelt (a $7.99 value) will be available for free on PSNSM from 12/16 for a limited time! Pre-order your copy of Guilty Gear Xrd -SIGN- today so that you can download this great character the second your copy arrives!

The Guilty Gear series is known for its visually stunning moves and its rocking soundtrack, and Aksys Games wanted to reflect that with an exclusive limited edition that will only be available in North America!

“The Backyard” – The outer box for the Limited Edition features a replica of “The Backyard” complete with embossed gears and foiling. Dare to open the book to uncover all the goodies!

Guilty Gear Codex – What limited edition is without its art book? The Character Book features a profile for each character from Guilty Gear Xrd -SIGN-, as well as those from Guilty Gear XX Accent Core Plus and Guilty Gear 2 Overture, and a glossary of terms; a complete character history for those who have some catching up to do!

Sol Badguy “Free” Keychain – Inscribed with the word “FREE,” this metal keychain is a scaled replica of the original belt buckle worn by Sol! Add it to your keys to show off something truly unique!

Guilty Gear Xrd -SIGN- is the next level in fighting gaming, breaking the rules of traditional 2D/3D fighters. Arc System Works, known for their awesome animated visuals, ups the ante, and using Unreal Engine, creates a 2.5D fighting game that has the look and feel of an animated 2D fighter!

Revolutionary Fighting – Considered one of the greatest fighting games of all time, the Guilty Gear series is just as known for its deep and challenging gameplay as it is for its visuals. Guilty Gear Xrd -SIGN- continues this tradition, and streamlines the gaming mechanics to make them accessible for the next generation of fighting gamer. Favorites such as the Roman Cancel system have been enhanced so get ready to slow down time on your opponent and shred their health meter.

Let’s Rock the Visuals – Arc System Works spared no expense at creating one of the most visually stunning fighting games to date. While Guilty Gear Xrd -SIGN- may look 2D, everything is in 3D, freeing the camera to be as dynamic as possible. What does that mean? Awesome and never before seen visuals – a veritable feast for the eyes!

Dual Language – Guilty Gear Xrd -SIGN- will also include both the original Japanese and English audio with English subtitles!

An Amazing Roster – The cast includes returning favorites such as Sol Badguy and Ky Kiske, plus new characters like the mysterious Bedman, the lethal Ramlethal Valentine, and more! Additional characters will be available as unlockables (Sin) or downloaded (Elphelt) through PSNSM!