Indie game development can be a lot like a stew, designers throwing genre tropes into a pot to see what tasty treat they can concoct. Sometimes the flavors don’t work right, and what comes out is an unpalatable mess. Other times, ingredients not thought of as complementary can come together in a way where they can mask each others shortcomings, and create a simple and satisfying result. Minimum, from developer Human Head Studios, is a team based third-person shooter that borrows a variety of elements from wildly different games and packs them all into a fast paced package. But is it too soon to ring the dinner bell? 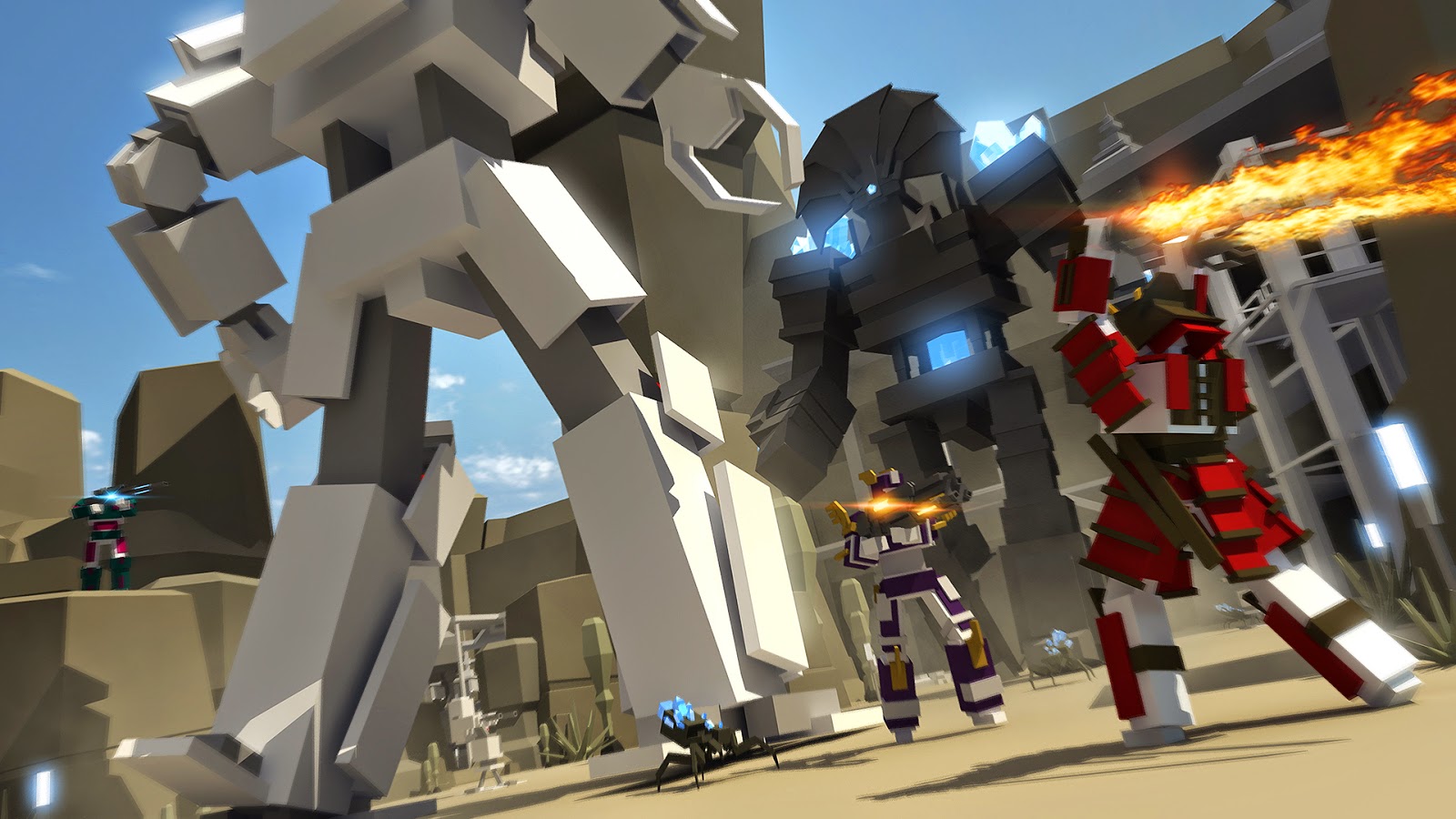 In one sentence, Minimum is a twitch shooter MOBA variant with customizable player loadouts, in-game levelling and upgrades, a crafting system, and portrayed in a voxel artstyle. That’s a lot to process at a glance, but it actually breaks down rather well. The main game mode, Titan, pits two player teams against one another and tasks each team to protect their own titan as it lumbers towards the opposing teams base. To win, your titan must battle through walls, turrets, enemy players, and even the enemy titan, and reach the base in one piece. While the titans are on the map, you can shoot the enemy titan to damage it, or take out enemy players to protect your own titan. But once those titans are destroyed, it is time to farm areas of NPC creeps – think jungling in a MOBA, where they aren’t on the main lanes – in order to get titan upgrade crystals which help beef up your titan when it respawns.

All the while, enemy kills will grant you weapon upgrades that level up your damage output, and armor materials that allow you to craft or upgrade your armor sets. While weapon upgrades reset on death, armor upgrades persist, providing not only a raw HP boost but also certain damage, speed, or health bonuses depending on your build. In order to support your playstyle, you set a loadout of two weapons and a device before the game, similar to a Call of Duty but without perks.

The game plays very fast, and rewards both the twitch skills of a seasoned Quake or Unreal Tournament veteran, while also rewarding tactical strategy and varied play styles like in a Call of Duty or Team Fortress. Control mechanics are simple, providing a sprint and jump with all loadouts, and the explicit caveat that running backwards is slower than running forward. What mixes things up are the loadouts themselves, as it not only provides a variety of melee and projectile weapons, but also additional skills. The default loadout is an assault rifle, shotgun, and grenade. 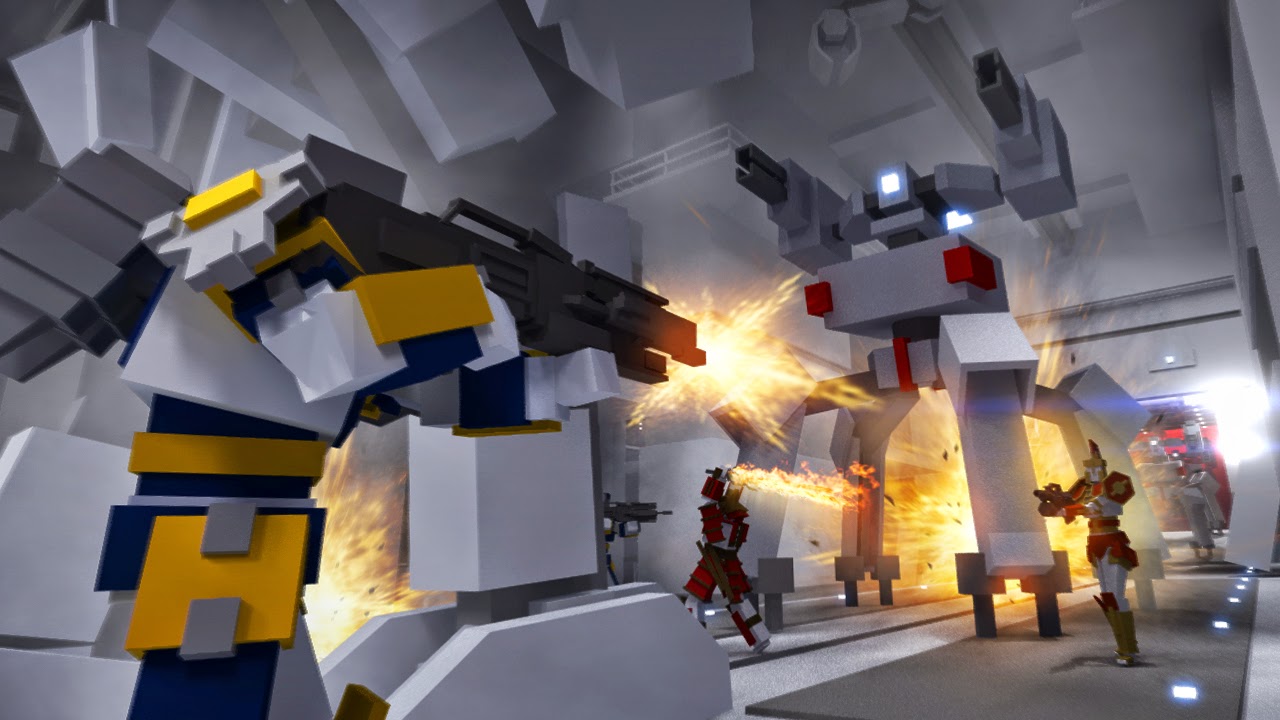 Primary fire of the weapons behave as any other game would treat said weapons. But the assault rifle has a secondary burst which is a much faster rapid fire with a slow pause after each burst. And the shotgun provides a huge leap in addition to the standard jump. Swapping out for a katana would provide you a quick forward dash, grenade launchers provide a manual detonation, plasma launchers can alter trajectory of the shot mid air, and so forth. I liked finding interesting ways to use these abilities, such as using the assault rifle from a distance, and then switching to the katana if things get heated and I need to beat a hasty retreat with the dash.

The diversity of equipment, and the layout of the maps, demand that you play to your equipments strengths, and know your limits. In my first few hours, I felt that there were some unbalanced elements. Namely, that Katanas would become unstoppable blurs of steely death, especially with a few weapon upgrades and the right armor equipped. But once I picked up where the chokepoints on a map were, I could go in and try to flush out the area with some explosives first, or avoid those tight corridors completely. Better yet, I started to get better at tactical retreats, such that if I saw a player coming at me, swords akimbo, I could use some creative jump-turns or equipment of my own to hasten the escape. Same goes for a well placed sniper in an alcove overlooking a clearing. If I knew there was one plinking our titan, I could often weasel around a back way and sneak up with some close range weaponry to make short work of them. The game becomes a loadout guessing game, and also a bit of cat-and-mouse, which I really enjoyed. 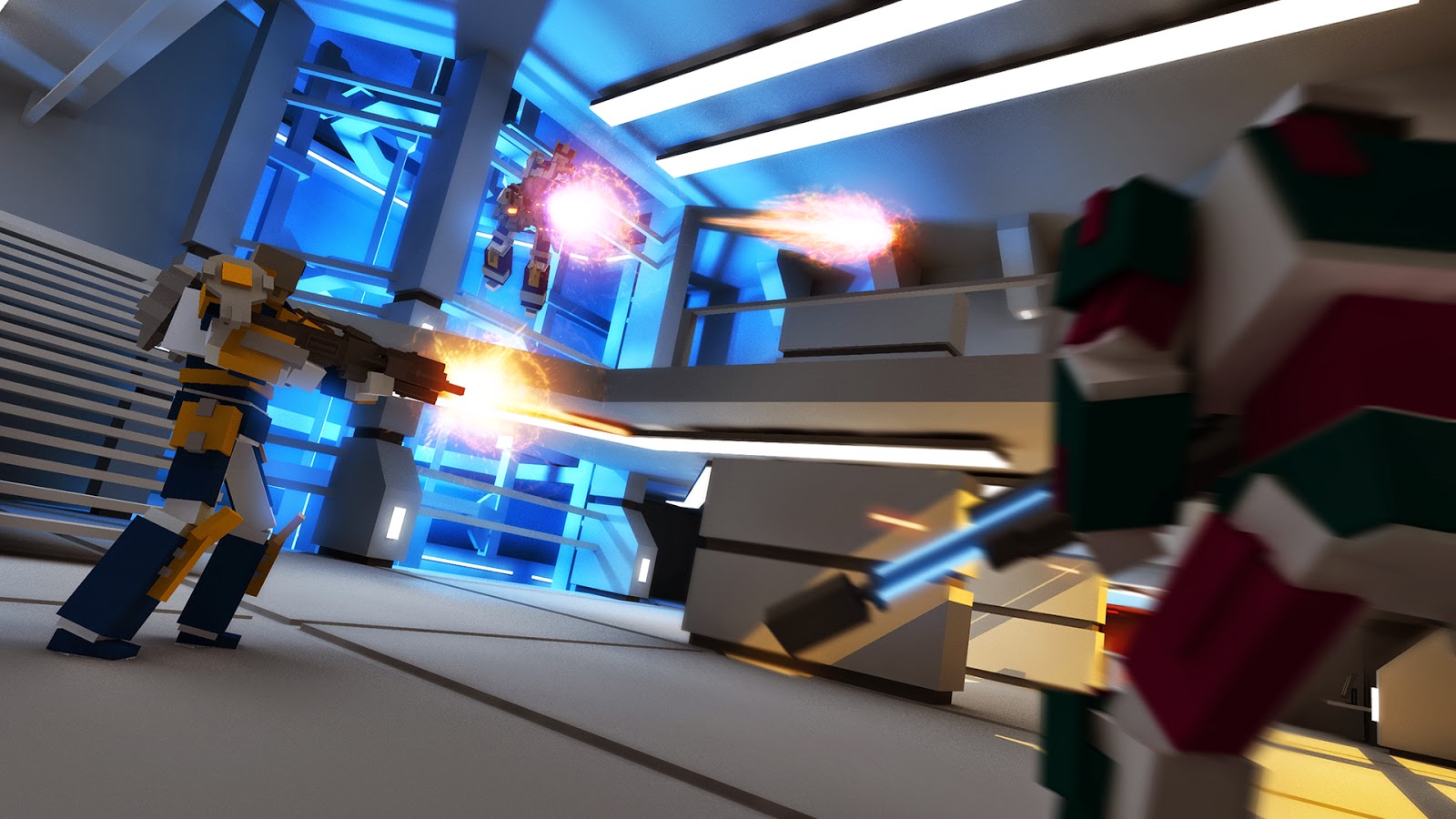 In order to build the loadout for your character, the game provides a crafting system for equipment which sounds more exciting than it really is. At the end of each match, you are awarded varying amounts of the games three primary currencies. In addition to those currencies, levelling up your overall character profile will provide you with a fourth currency used to unlock new schematics. Once you buy a schematic, you can then build that weapon or device with required amounts of the three primary currencies, and then you have a copy of that weapon. As it stands right now, that is the entire extent of crafting. What could eventually be a fun way of customizing weapons by making multiple copies and equipping them with different modifiers and upgrades is just an overwrought unlock system. It is dumbed down to the point that it is not even worth mentioning as a bullet point in the games description, and in fact feels disingenuous.

Though Titan is the clear focus of the game, there are two additional modes offered. Team deathmatch is par for the course, with teams squaring off in smaller maps with nothing to shoot but one another. It still retains the loadout and armor upgrade system of the Titan mode, allowing the player to retain their play style. Horde mode collects a small group of players on one team, fighting off waves of dinosaurs, ninjas, and robots. In Minimum, this mode seems unnecessary, or at least unrealized and unpolished.

Enemies spawn all over the place with no warning, so having a dinosaur spawn next to you in a corner happens all too often. It’s also hard to get a sense of whether you are doing damage or not. In the other game modes, enemy players will start to glow as they take damage, until they eventually turn bright orange and explode. While some of the robots have a subdued version of that effect, you have to be right up on them to know if your shots are even hitting them. Worse yet, that quick sense of in-game upgrading isn’t there as enemy drops seem very sparse and completely random. And with the tightly packed maps and random spawns, it’s hard to devise any sort of team strategy. 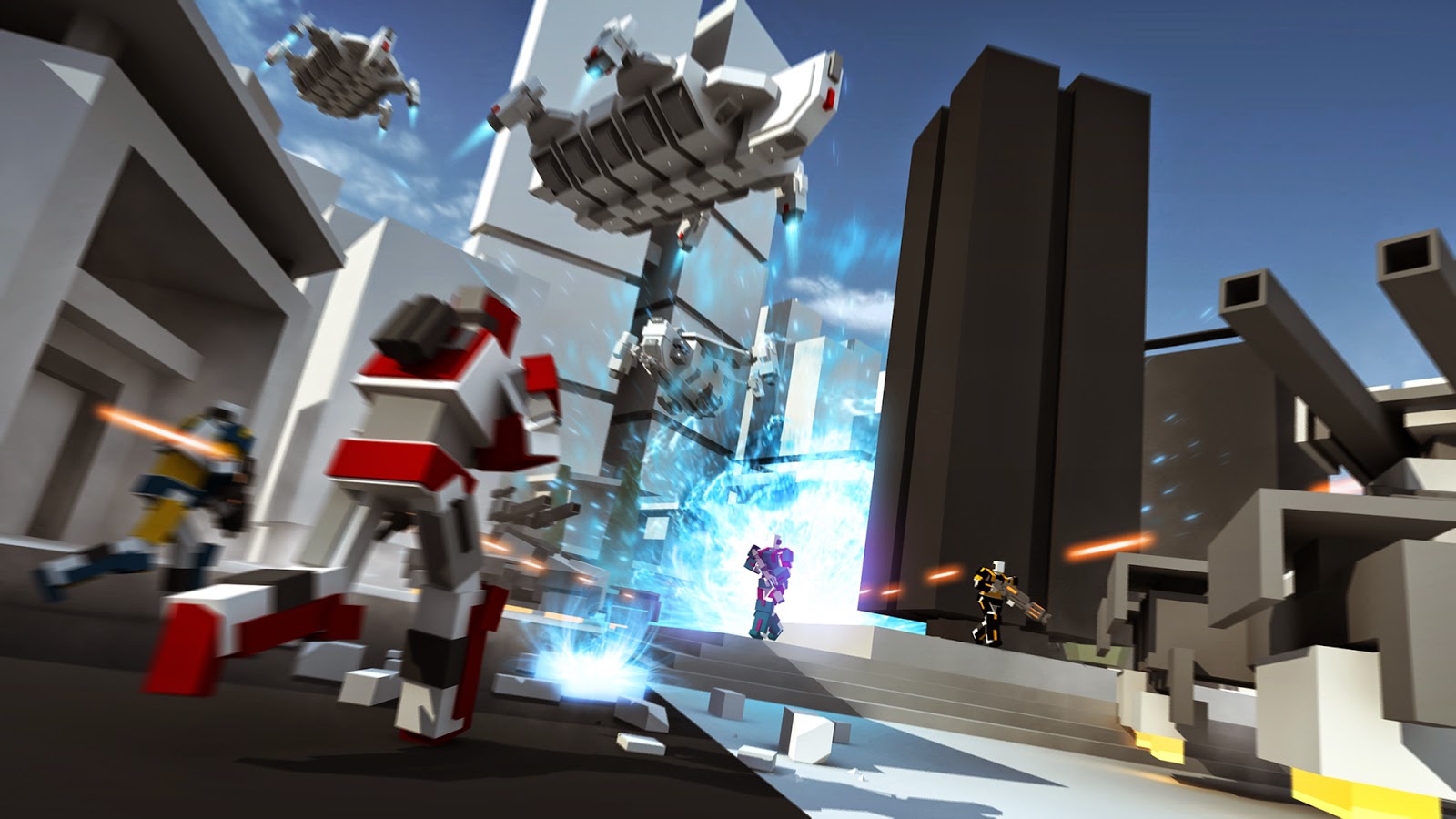 What is unfortunate about the game is that it just isn’t finished – it doesn’t feel like a full release, despite being an official 1.0 version. The game was in Steam Early Access until just recently, but I had to go back and double check that the had pushed it to a fully live state. There are a significant number of “Coming Soon!” messages or completely inactive buttons in the interface. Weapon experience and in turn weapon modification, equipment upgrade menus, salvaging weapons, “special” schematics, blueprints for new deployables or structures, and daily missions are all indicated in the interface, but completely lacking from the experience.

One of the maps, Desert Canyon, is still having a polish pass of texture updates applied right now. The core of the mechanics are there, but many of the additional functionality window dressing that they tout is just not there. That said, the did manage to find time to implement an in game store that allows you to pay additional money for reskins of items. With so much of the game being incomplete still, this feels like a shameless cash grab, despite being a model I would have no issue with in something like DOTA or Smite.

In its current state, Minimum offers a fun, stripped down experience that hearkens back to old school competitive shooters and incorporates the new craze of MOBA mechanics in a unique way. But in terms of living up to expectations as an overall package, it falls quite short. This is clearly a project that the developers are passionate about, but have had a significant problem with scoping and feature creep. If it were still in Early Access, I would say this is one to keep your eyes on come a year from now. But I worry that the game may have been pushed live as a final release far too soon for its own good, and can’t help but wonder if that is a sign of waning interest from the developers, or dried up coffers.