Gravity. Sure, it’s that handy physical law that keeps us from drifting out into the bleakness of space. But it makes for a some really fun mechanic in a wide variety of games. Whether it is a simple ragdoll tumbling down a hill in a FPS, a simple Flash golf game, or one of the myriad Scorched Earth clones, I still get a thrill from playing with the physics. In fact, years ago, I interviewed to write for a now-defunct physics game website just to fuel that glee. When I was offered the chance to play Orbital Gear, a side scrolling shooter featuring large mechs hopping and drifting around planets, I jumped at the opportunity. But is the game an out-of-this-world experience, or does it struggle to really get off the ground? 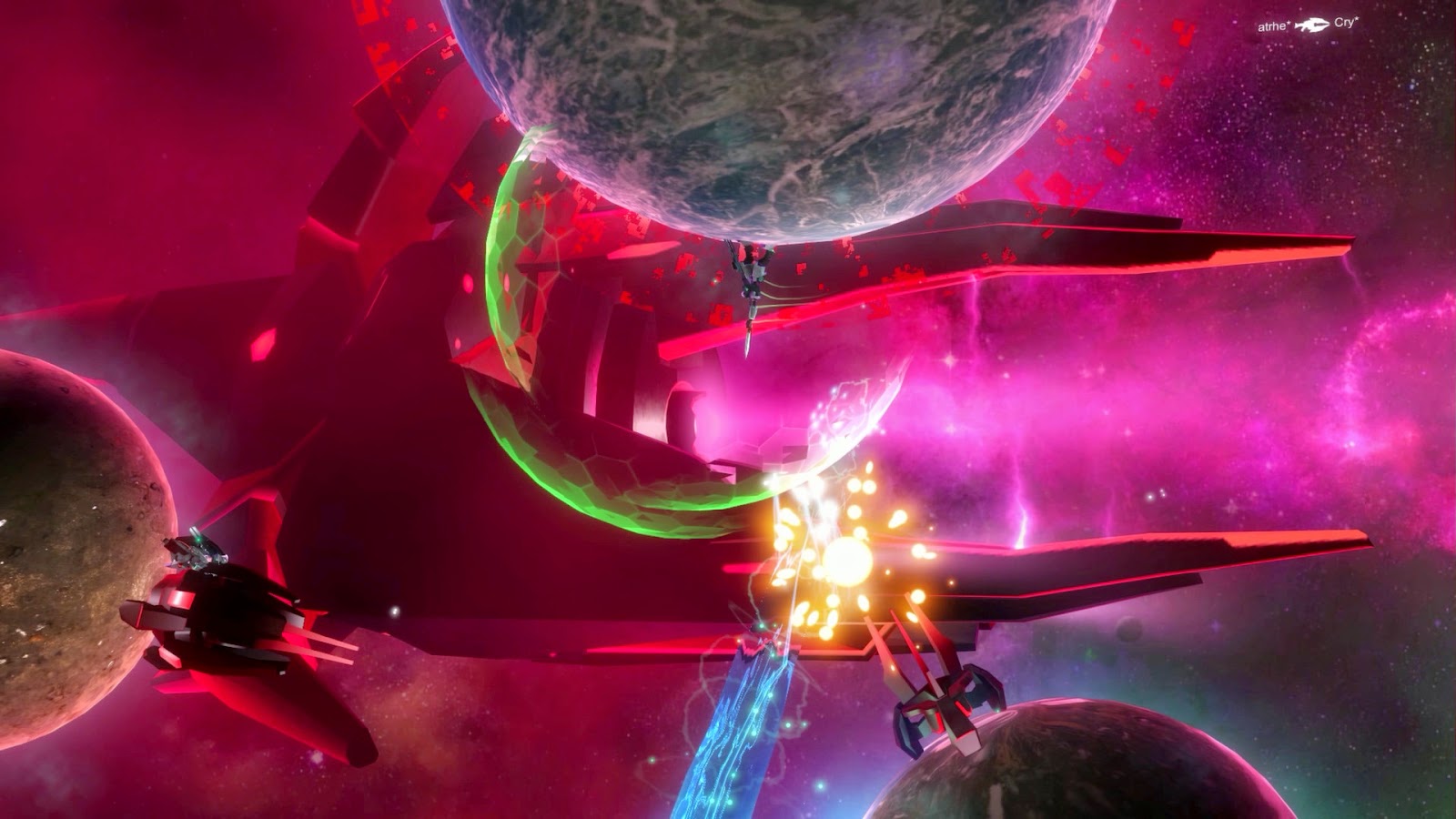 Orbital Gear pits two teams of planet trodding mechs against one another in either a Team Deathmatch or base attack mode. Your mech has a simple loadout system, equipping 2 of 12 different weapons, and 1 of 4 utilities. Weapons range from chainguns, flak cannons, and grenade launchers to mini homing rockets, a black hole gun, and one that sets planets themselves ablaze. While some weapons are altered by gravity, others rely on the phyisical surface of a planet to be effective, and the Phase Orb (black hole gun) shoots through planets and creates its own gravity field. Utilities are a bit less exotic, allowing you to boost, shield, drop mines, and summon turrets. All of these weapons and utilities are available from the outset, with no additional systems in place for customization, unlocks, or upgrades.

Once you have found a loadout that suits your style, it is off into the game world itself. Each level is a series of planets, decrepit space station platforms, and forcefields. The trick is in navigating the celestial terrain, using gravity to fling your mech to distant worlds while angling salvos at the opposing forces. Traversal is fast and has a good weight to it, encouraging momentum and punishing any change in direction. There is a satisfying moment of weightlessness at the height of each jump, and when changing direction on foot you will come to a complete stop before picking up speed again. All that is needed as input from the player is simple left, right, or jump, with mouse aiming for weapons and a final button for utilities.

Aesthetically, the game is pleasing to ears and eyes alike. Every map has it’s own color palette for the terrain and backdrops, each one doing a great job adhering to a general color temperature. Backdrops can be simply stary fields, sprawling space stations, or close up solar events. All the while, your 3D modelled mech trapses about in silhouette, and the player model and planet surfaces alike react to lighting conditions. The varied soundtrack is sufficiently space-y, with heavy use of synthesizers, phasers, and a general light echo effect that seems present in all interstellar or futuristic musical accompaniment. 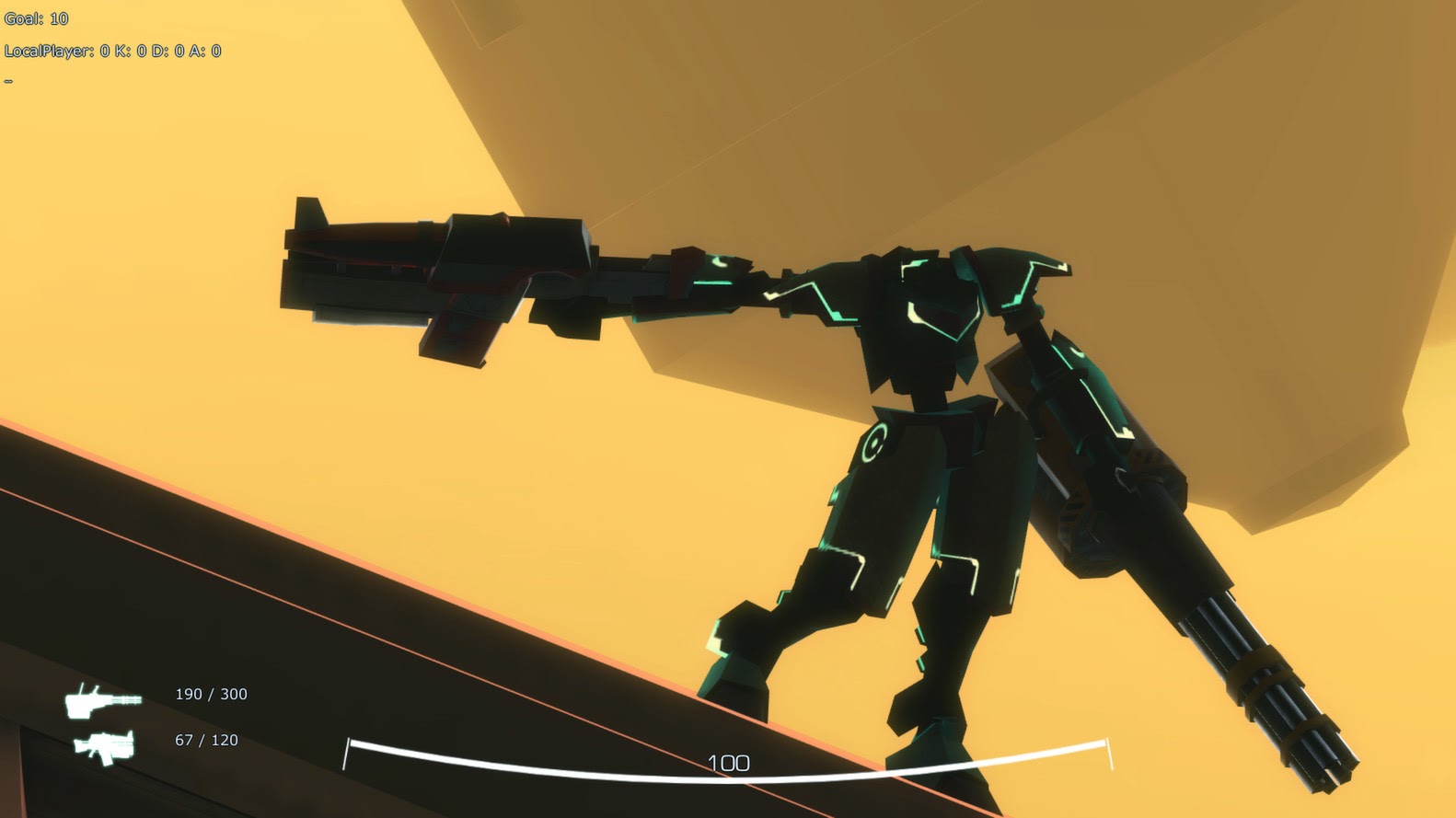 Although it’s a pleasure to look at and listen to, the same just can’t be said about the act of actually playing the game. At launch, the entire experience is multiplayer only – if there were no other humans online, all you could do was wait or try to beg fellow players on forums to join you. There was not even any practice mode, so I was forced to spend a few hours refreshing the lobby page. Once a game has been found, the netcode just does not perform. More often than not, it is a laggy mess of other players and munitions skipping around onscreen, making it difficult to use any weapon that requires precision or proximity.

It quickly devolves into players using a select handful of weapons – notably those with homing, area of effect, or fire-and-forget properties. As it turns out, these same sets of weapons are extremely overpowered, with the Phase Orb being the primary culprit. It is all too easy to sit on one side of a planet and spam black holes that have a significant area of effect. The match often turns into a few brave souls jumping around trying to get close enough to take out those which sit on the outer edge with their powerful tools of devastation.

There is little in terms of strategy to be employed in the game, and while it can be fun to experiment with the physics, the controls to ability to actually do so feels a bit off. In an age where character progression or unlocks are all the rage, having a game where everything is presented to you at the outset hearkens back to the early days of competitive shooters. But with the aforementioned netcode issues, only a handful of those weapons see any use. In game, the lack of a minimap and the rather small viewport into the gameworld make tactical positioning an improbability. Despite simplistic controls, there is a strange design choice that determines which direction is which. 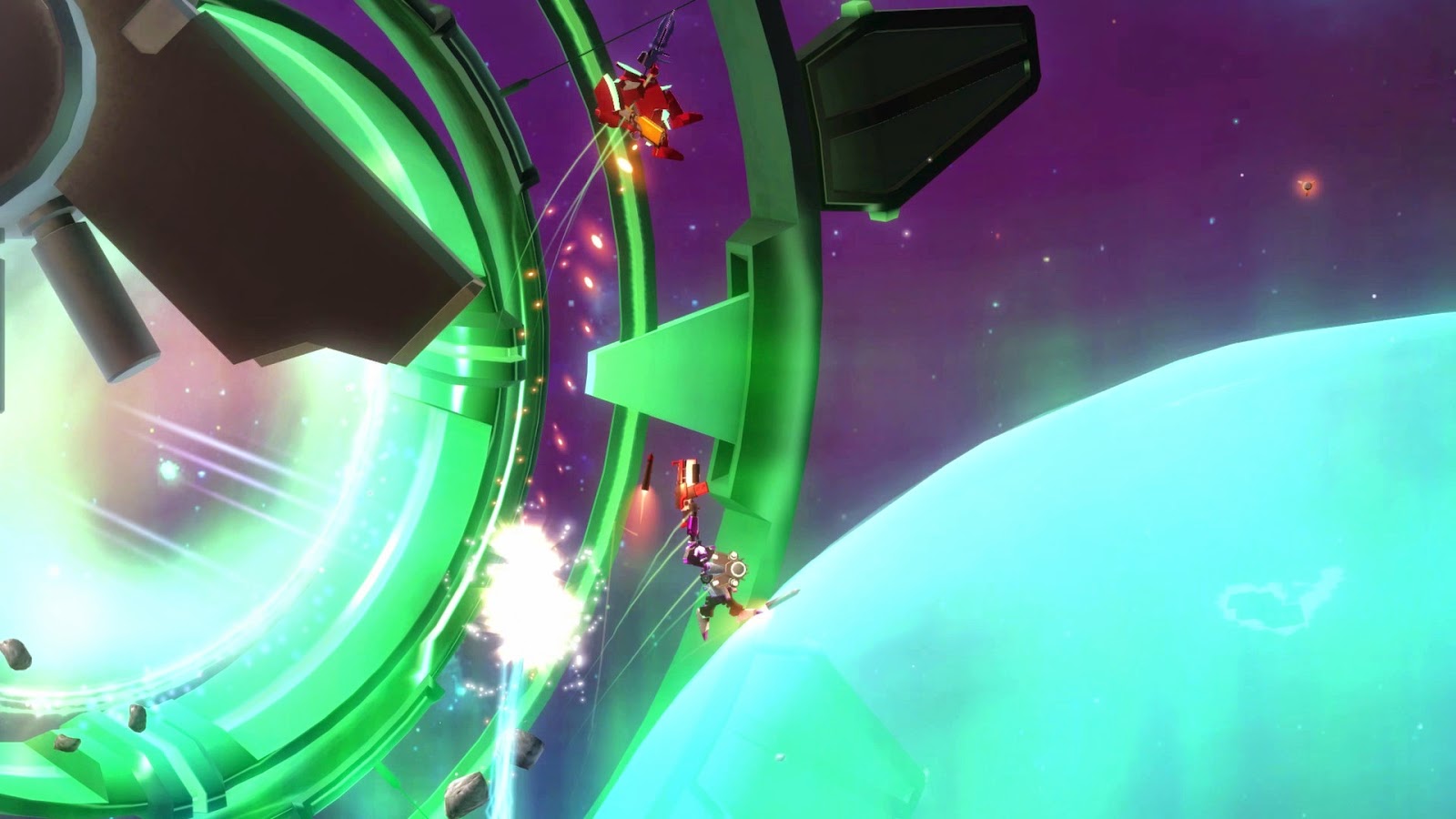 While running around a planet, you can hold one direction and continually run around in the same direction regardless of what the orientation would dictate. But the moment you jump, those controls can reverse on you and impede progress. This determination of which direction is which is also an issue when caught between orbits of two worlds, as things may suddenly reverse on you in a decidedly unintuitive way. Another wrench in the works is that only planets or Phase Orbs have any gravity – even if there are entities like asteroid fields or platforms that are larger than planets themselves. Frustration ensues as you try to hop over the edge of a flat surface, only to be pulled back ever so slightly by a distant planet.

What Orbital Gear sets out to do is squarely in my wheelhouse, and on paper is a game that I would adore. But as a retail offering it falls quite short of being an enjoyable gameplay experience. Bobbing and weaving through planets at breakneck speeds is thrilling, and chaining orbits to launch yourself halfway across the map becomes a minigame in and of itself. But the shortcomings of the netcode prevent player-on-player combat from ever feeling satisfying, as precision weapons rely on sheer luck over skill. A lack of overall depth, and combatting controls as much as gravity, are significant detractors as well. A pretty presentation and fun concept just aren’t enough to bring this game up to the level of a recommendation.