This is a particularly difficult article to write. Not because of a poor quality release or there not being much content to write about, but because of the torrent of emotions that one is assailed by when playing through the kinetic visual novel that is Planetarian ~the reverie of a little planet~. First a little background on the developers of this title, VisualArts (more specifically, Key). Those of you that are fans of anime, such as myself, may recognize a few of the titles that they have made of the years. You see, VisualArt’s/Key have created a number of fan-favorite tearjerkers like Clannad and Angel Beats! (my personal favorite) as well as Air and Kanon. Anime aficionados the world over will instantaneously recognize those four titles and for those that have seen them will immediately recall the emotional impact those series had on them.

I for one was a wreck after Angel Beats!, barely able to contain the swirling mess of emotions that the series brought to me. Even thinking about the series causes my heart to drop with a kick to the feels; simply put, Key creates some of the most touching stories out there. With a pedigree like Key’s, it is a near guarantee that anything they produce will be well-written, touching, and a wonderful ride. Now, Planetarian ~the reverie of a little planet~ was actually released in 2004 and has seen a number of re-releases over the years and the most recent is the fully translated North American release that was just recently published by Sekai Project. In a genre of “games” that is woefully under-represented (the Visual Novel), seeing a genre powerhouse like VisualArts / Key coming West could be a cause for celebration, though it is not unheard of for big names to drop the ball in big ways. Did Key’s latest Western release pay off? Read on to find out more.

Kinetic novels are very straightforward and simple; there are no choices, no alternate endings, just a simple read-through of a book with some animated pictures. This means that the emphasis is truly on the story, the art, and the music with the story taking center stage. Naturally though, a visual novel of any type needs to have some impressive art, something to help drive the text on-screen that helps create the visual mood. In Planetarian you will find excellent art with beautifully drawn characters and environments that all depict a post-apocalyptic world that is dank, wet, dreary and gives off an air of hopelessness. One thing I did find was that some of the screens were recycled numerous times which is not necessarily a bad thing, but with such a developer as Key behind the helm I somewhat expected a bit more. 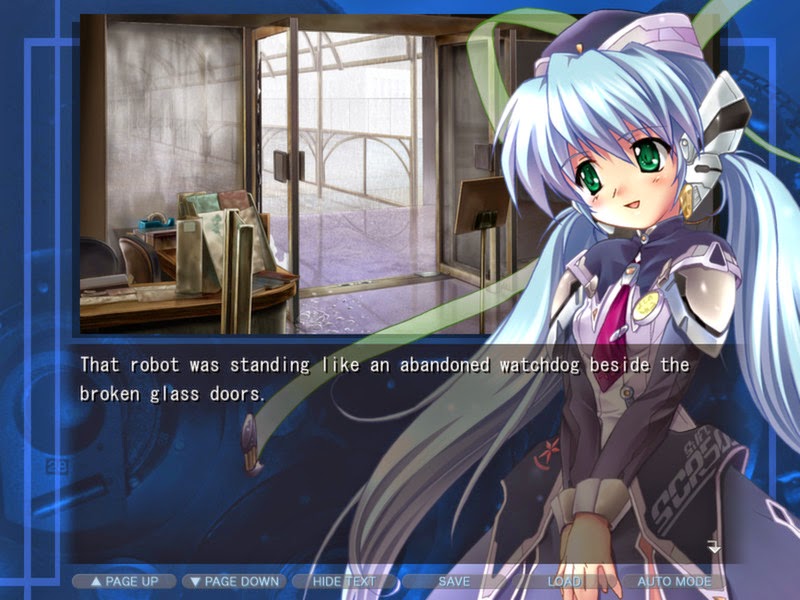 Given that each screen is a joy to look at it is not much of a downside, just something that I noticed on a few occasions and made a mental note of it. One thing that did surprise me was the fairly rampant use of some animated screens and effects; most of the visual novels I have read do not use animation beyond the fade in/out of a character or item on screen. It was a very welcoming touch and I found it to further enhance the story and the overall feel of the story. The character designs are instantly recognizable as VisualArt/Key has a very distinct art style so fans of Clannad and Air, with a little bit of Angel Beats! aesthetic thrown in, will be very pleased and likely just as comfortable as I was with the overall design.

Another tidbit that surprised me was the quality of the audio; haunting yet magical background music was accompanied by some wonderful ambient audio (at times). I was more or less expecting a few background tracks and maybe a little effect here and there and instead I was greeted with a full voice track done by some stellar seiyu. All of the spoken parts are handled well, with crisp and clear audio by seiyu that add life and body to the script. Honestly I wish English voice actors could read/speak half as well as Japanese seiyu because they are so professional and you will rarely hear a line that sounds like it is from a script. 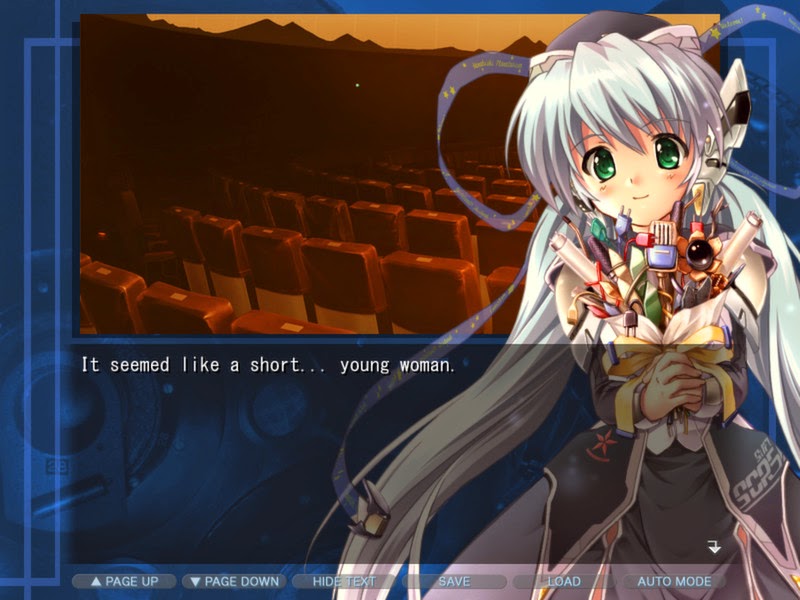 There are points in Planetarian where the audio is designed to echo based on what is happening in the story and it is a wonderful effect that helps pull the reader even further into the story and it is a very welcome addition that sets it apart from some of the other visual novels out there. I would personally love to just get my hands on the OST for Planetarian as it has some excellent music. Not that the OST would be very long, there are not really that many tracks, but the tracks that are there are amazing as they help set the mood and carry the kinetic novel aurally.

While audio and art are important, let’s be real and agree that the draw of the visual novel is the story. Yes it is important for a visual novel to have well, visuals and those visuals should have some sort of connection to the content of the story. Fortunately Planetarian’s art is excellent and it fits in extremely well with the story. Now the story, without spoilers is touching and deeper than one would think. Following a “Junker” that moves through the different husks of civilization, looking for scrap that can be salvaged and used to survive, Planetarian’s story is set in a bleak and dismal world. Humanity has used biochemical warheads to reduce the civilized world to rubble and then as a matter of survival, began breeding like there was no tomorrow. 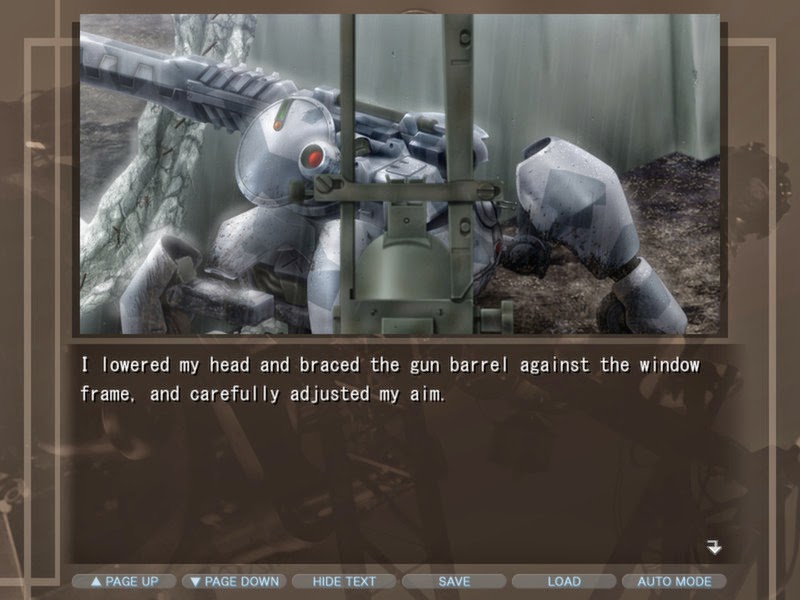 As world conflicts spread, humanity started dying out due to the biological weapons and the lack of resources until only a token population remained. Struggling to survive in the harsh climate and trying to escape the roving bands of bandits and warmachines, life in Planetarian is harsh and cold and it is evident when our protagonist stumbles into a planetarium inside what is called a “Sarcophagus City,” a sort of domed and doomed city with no inhabitants outside of dated robots, hunting mechas, and rival junkers. From the first step into the planetarium it is evident that the story is going to be touching, taking you through the ups and downs of hardships and heartbreak, friendship and loss and the issues of dealing with situations that are beyond control. The ride that you be taken on is both crushing and inspiring in true VisualArt’s/Key style.

In all, Planetarian is a wonderful visual novel that truly does make the best case for why more VN’s need to come West. Some can be a bit more racy, like Sakura Spirit, but the real driving forces behind the genre are those like Planetarian ~the reverie of a little planet~. A meticulously drawn, wonderfully narrated, and deeply touching story laid to an amazing soundtrack, Planetarian grabs a hold of your heart and does not lot go until well after the novel has ended. Planetarian ~the reverie of a little planet~ is an excellent example of what the genre has to offer and any fan of anime, manga, or reading in general really does need to try out this title.