comments Share
You are reading
Styx: Master of Shadows – Xbox One Review

Like the rest of the gaming community, I first heard about Styx: Master of Shadows at E3 this past year. I honestly did not know what to think of Styx outside of the fact that I was super interested in the fact that you play as an ugly little goblin and not some shiningly perfect example of a perfect human or a tall and graceful elf. No, not in Styx; you play a grimy, nasty little goblin who slithers around in the darkness, has a really cool tattoo, and carries a really big knife. It is not often you play something that is the equivalent of an anti-hero in video games and I thought that it would be a nice change of pace. As more details emerged about Styx: Master of Shadows I became more interested in it; after all the last time there was a game that focused more on stealth and completing tasks without killing everything in sight, we were given Mark of the Ninja, one of the best side-scrolling games since Castlevania: Symphony of the Night (I love that game …). 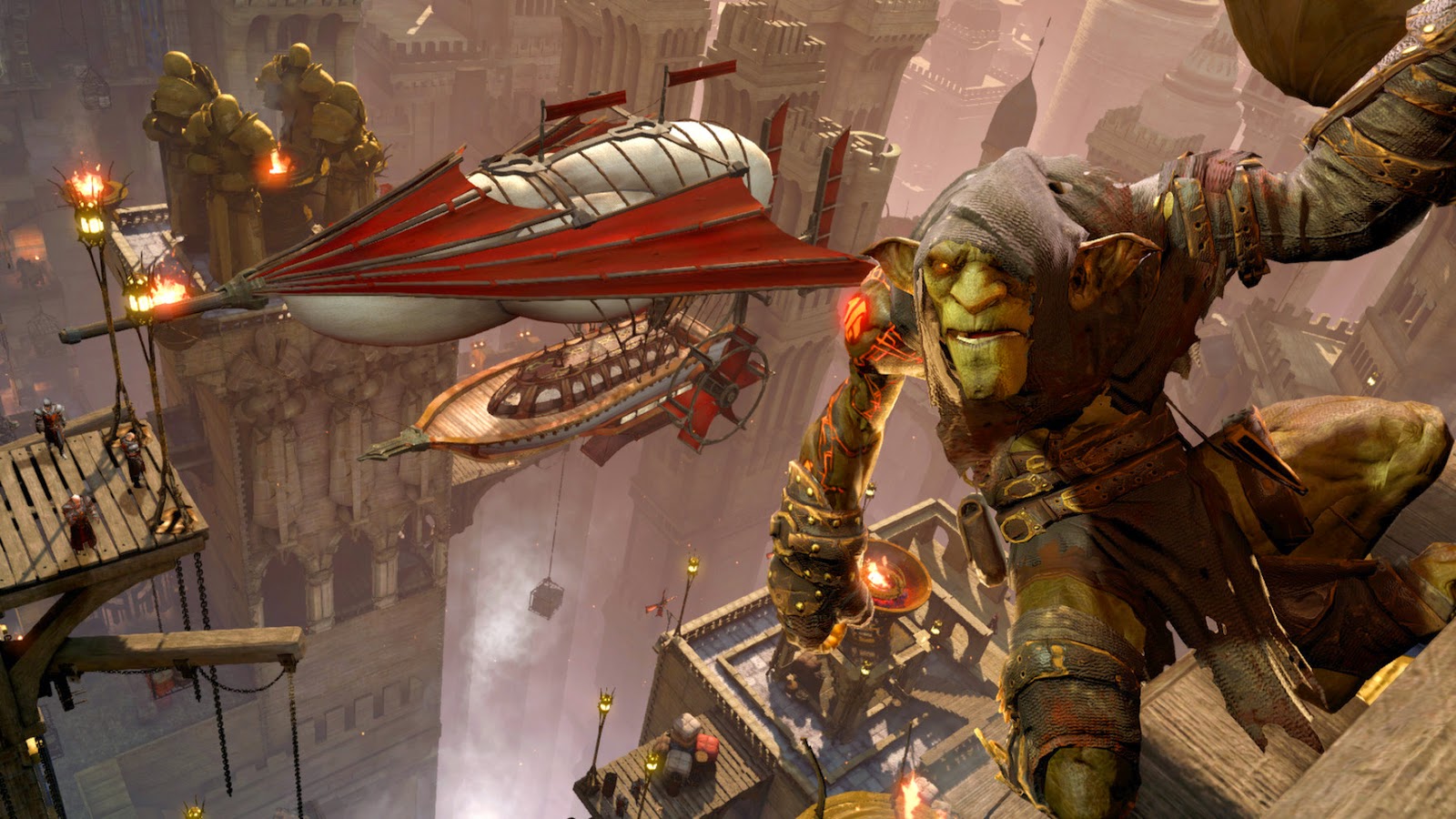 Styx is, well a master of shadows, focusing more on stealth and cunning than pure brawn and fighting prowess and as a goblin, vile creatures that they are, Styx is a bit of a thief. Throughout the course of Styx: Master of Shadows you will come to learn more about Styx, how he was created, why he is unique, and what sort of world he lives in, all the while focusing on stealth and something I would like to dub “living puzzles.” Is the take on stealth mastery and enjoyable experience? Read on to find out more.

I had the pleasure of picking up Styx: Master of Shadows for my lovely Xbox One, though a colleague here at Chalgyr’s Game Room will be bringing you a review or Styx on the PlayStation 4, so my perspective will be based on the Xbox One’s perspective so head over to PY’s review to see his impressions on the PlayStation 4. In this day and age 1080p at 60 FPS seems to be the rage and there is some aggression towards Xbox One’s 900p resolution and because I could give a fig for resolution gates and whatnot, I play all of my games at 720p on my consoles because to me, games are not about the graphics.

It is about the journey, the story, the content, the entire experience; graphics are one small aspect (and to me, far less important than audio). That said, on the Xbox One there were numerous points of framerate drops and stuttering, however it never happened while in-game, only during the in-engine cutscenes. The first cutscene actually stutters the most, dropping to what I believe would be about 12-15 FPS compared to the 30FPS that the game runs at while you control Styx. I also found that during these cutscenes, the uncanny valley is incredibly discomforting, not to mention the way that the whites of a human’s eyes are not actually white but flesh-toned is really creepy. 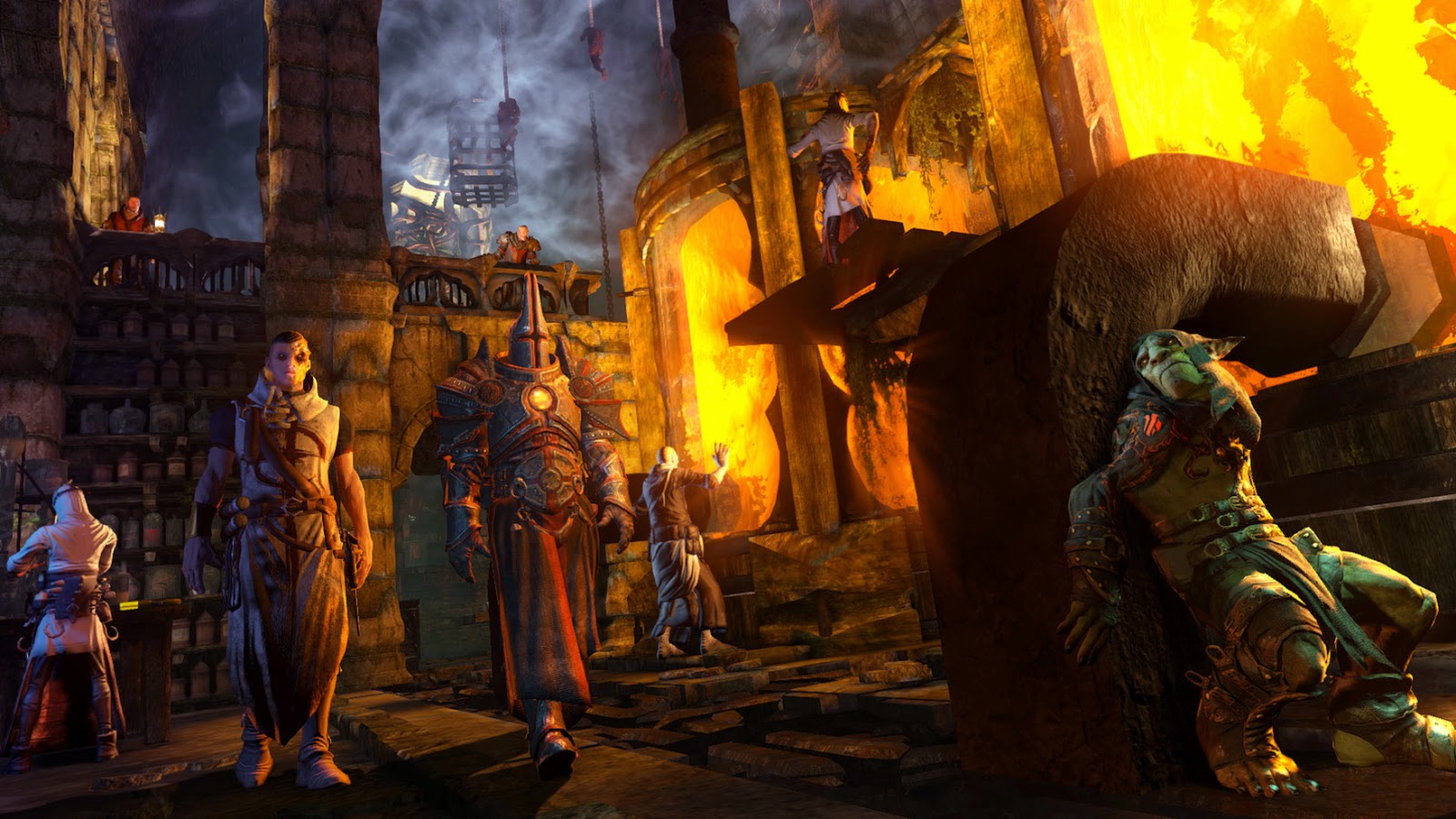 Almost as if the eyes were closed and the iris/pupil were a part of the lid and not a separate part of the eye; it was quite disturbing. In-game though you would not be able to tell given the detail on a human’s face is not high enough to pick out individual features like irises or pupils. On a texture-level the graphics are not much different than Bound by Flame on the Xbox 360; definitely not consisting of next-gen textures, but the lighting and shading is a different story. Before I go there though, some of the the character models all seem to move rather stiffly, specifically the armored guardsmen that are ‘on alert’ (i.e. they have their weapons drawn).

They seem to walk around like they have a board stuck up there … backs, though if they are not alert they have a very fluid and natural form of motion. Peasants, workers, and even the lightly-armored archers do not seem to have this particular issue, as they are well animated and move with a certain grace; it is just the knights / guardsmen in armor that I noticed this odd behavior with. Now, back to shading/lighting; Styx: Master of Shadows is a game about well, being in the shadows and there are plenty of them with the option to make more (via snuffing out light sources). I do not believe I would have been able to see this type of lighting on the 360, though the PlayStation 3 may have been able to handle it. I would have liked to see more variation to the lighting as it hit Styx’s body though, since there is a definitive circle that surrounds a sconce and if you skirt that circle of light he will be in complete shadow the entire time. Not necessarily the most realistic portrayal of light so seeing some sort of variety in the distance from a light source would have been nice.

Beyond some graphical quirks like the way lighting sources worked, Styx is still a very attractive game as seen in the level design; in a game solely about sneaking around in the shadows, Styx: The Master of Shadows has some amazing levels to go through with numerous paths and environment effects that can be used to your advantage. When entering a new area I would always shoot straight to the highest point so I could get a good view of the level as a whole which would then help me determine my routes. Fortunately the draw distance is quite impressive and being able to see distant patrols was helpful. 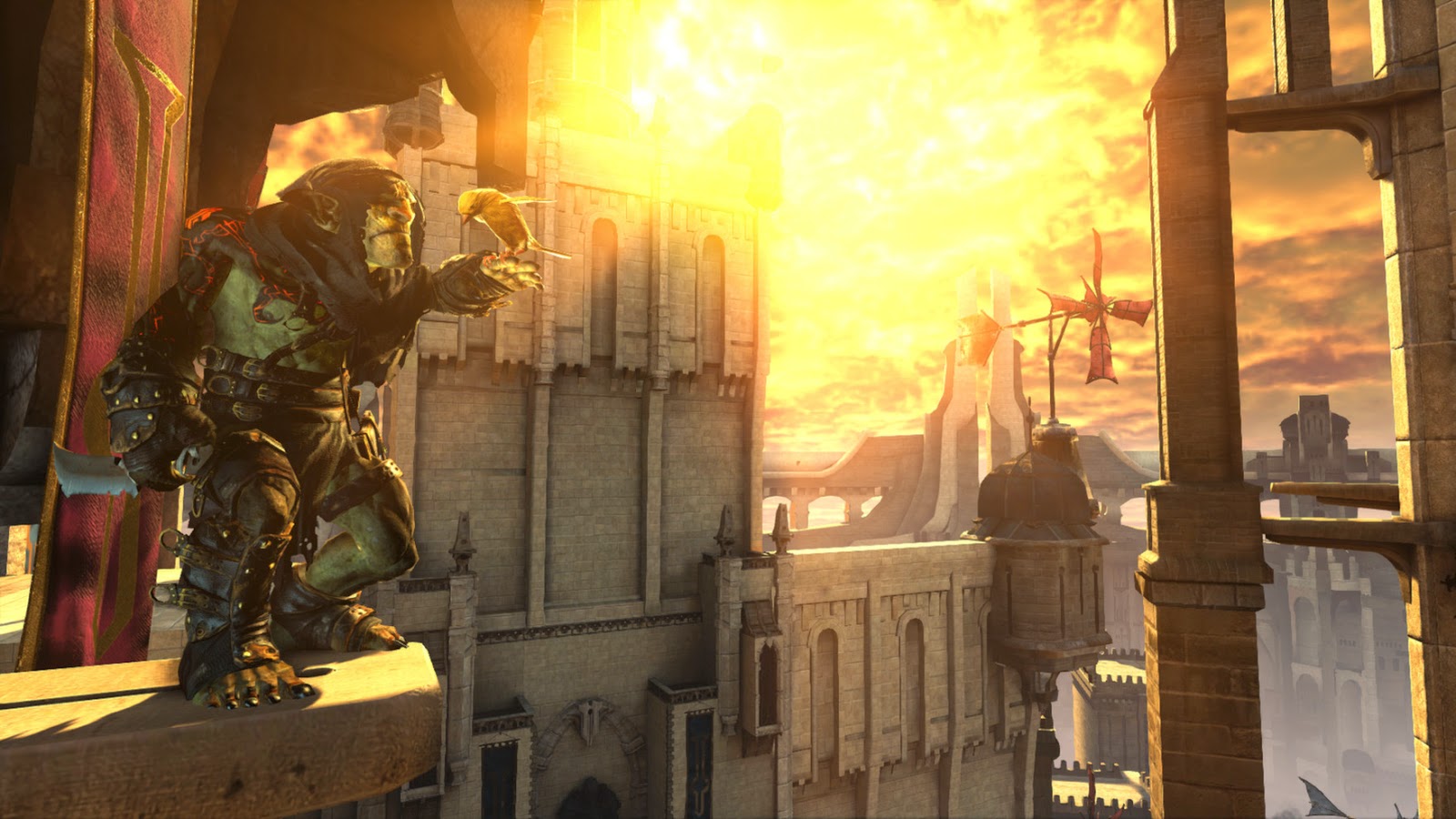 I do have to say that each level has a wealth of movable items and features strewn about it; from cranes and furniture to barrels, buckets, and other mundane items; there is a ton to interact with. Not to mention there is nothing worse then zipping through the night only to accidentally brush up against a broom handle and to have it fall to the ground in a loud clatter only to have someone nearby come investigate. If I was not out of site fast enough I would have to fight and if I may say so, fighting is the absolute worst aspect of this game. Every fight is a quicktime event and every fight is simply barbaric (not in a Conan-style barbarism, but like, pouring salt, vinegar, and lemon juice in your own eyeball barbaric). For being a “master of shadows” Styx is about the slowest fighter ever; for all of his nimbleness he swings with about as much conviction as ol’ Granny would were she in his shoes. I personally used the terrible fighting mechanics as the absolute perfect excuse on why it is I would go half-way across the map just to avoid a fight.

Maybe it was by design, I do not know, but one this is for sure, that design is terrible. If you can, though, creep up on an unsuspecting human you have two options, a quick kill, which will make racket (i.e. draw attention) or a silent kill which takes time. I opted for the silent kill 100% of the time, since the fighting was so poor I just said ‘forget it, let’s play this the stealthy way.’ Which leads me to sound; I do not believe I have played a game where audio was so important. Something as simple as a quick dodge under a table makes noise and brings an investigative guardsmen, or if you make a particularly poor landing someone will come to investigate. More often than not I would navigate solely based on sound as a guardsman’s heel beat or a workman’s hammer fall would change as I came closer to these pitfalls. If only more games payed this close of attention to audio then we would all be blessed with such levels of immersion.

I mentioned “living puzzles” in my opening paragraph and here is why; while each enemy is set on a specific path they have their own senses (sight, hearing) that allow them to deviate from this path. If you are down the hall from their patrol path and you bump into a table they will come and look. Not only that, but they will yell out to other guards in the area as well. There is one particularly neat spot where three guards are up in something akin to a bell tower (without the bell) and two of them are chatting while the other dozes against the wall. I managed to kill the one dozing, which brought over the other two guards. Once I was out of site long enough they stopped commiserating over the dead body and started walking away so I stepped out and silently killed the guy in the back as they were walking. 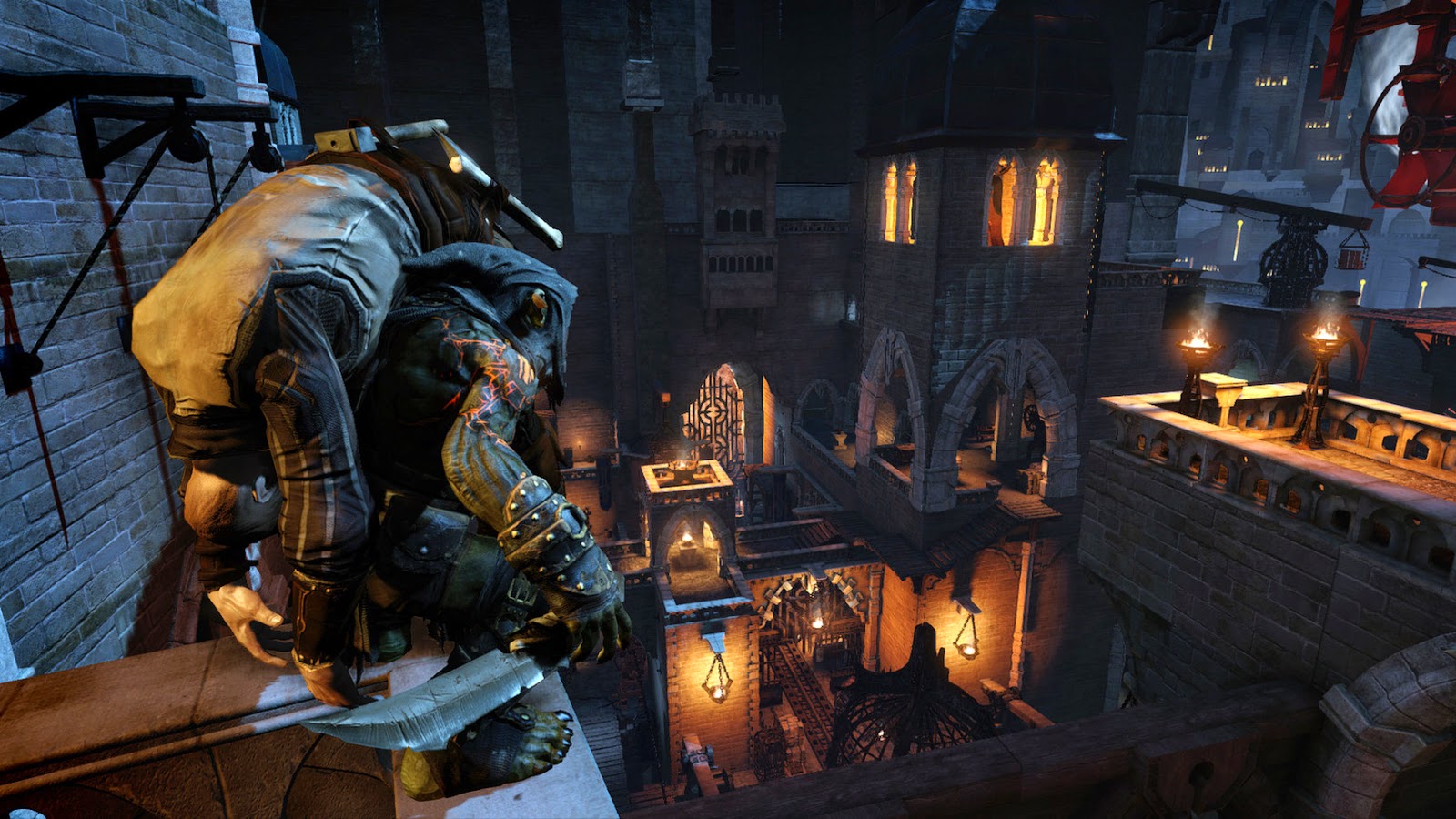 Then I moved on to the next, dispatching him in the same fashion; the real goal was not to clear the tower though, it was to clear what was below the tower. You see, at the bas of the tower were eight guards and three peasants, all walking and patrolling in a fashion that was very difficult to get beyond, especially because there was a bridge near the one side with two archers. I snuck my way into the tower, up to the top and killed the three guys; I then pitched two over the sides of the railing to have them fall below causing quite the stir and drawing the attention of the guards. This allowed me to sneak around the now panicked guardsman and towards my objective.

Scenarios like that absolutely fill Styx: Master of Shadows to the brim and create any number of memorable experiences. Outside of technical difficulties like cutscene framerate dropping, weird textures (those human eyes will give me nightmares for weeks to come) and some of the worst combat mechanics I have seen in a video game, Styx is a living, breathing stealth-puzzler. Having played through the campaign a few times now, I can say that no two runs have been the same which lead to a lot of surprises the second time around. It is difficult to find a game that has the same level of replayability as Styx: Master of Shadows; that is, assuming you can get through some of the bugs that I mentioned previously.

By way of its story, Styx is nothing to write home about, however it is enjoyable the first time or two through it, but the real winner is the gameplay; sneaking through these environments without being seen is a challenge that is as fun as it is rewarding. The downside is that for being a next-gen only title, outside of draw distance and some of the lighting mechanics, Styx is un-arguably last generation in terms of quality of textures and models. Still, Styx: Master of Shadows is an excellent game and any fan of the stealth genre with an Xbox One should certainly pick it up.