I am a longtime fan of flight simulators and space-based simulators and since the old days of Flight Simulator 2004 where I picked up a Microsoft Sidewinder Force Feedback flight stick I have been hooked on  the use of a flight stick. As the years went on I became more interested in the benefits of a H.O.T.A.S. system (which stands for “hands on throttle and stick” for the uninitiated) though only trying a handful over the years. Due to the complexity and relative high cost of a HOTAS system there are unfortunately far too few manufacturers that make affordable systems, though there are plenty out there that provide the flight stick only. 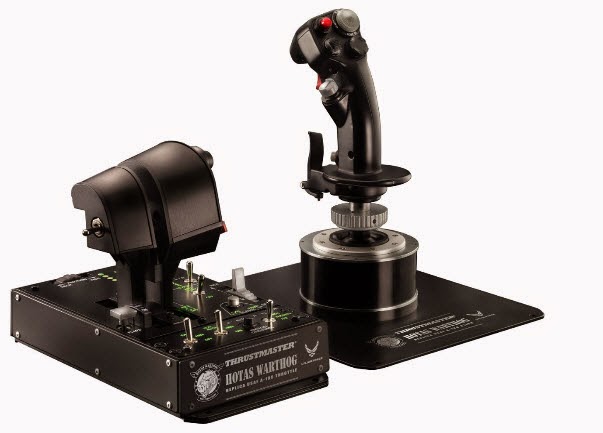 While I have used most of the core sticks, the Sidewinder by Microsoft, the X-52 by Saitek, and the Logitech Extreme 3D, I had yet to experience one of flightsticks or HOTAS systems from a leading manufacturer; Thrustmaster. Setting the bar far higher with the T.Flight or T.1600M sticks, Thrustmaster wanted to pass the sound barrier and leave the rest of its competition far in the past with the development and release of the HOTAS system to end all HOTAS system.

Enter the HOTAS Warthog by Thrustmaster; ten pounds of machined metal nobs, switches, throttles and stick, the HOTAS Warthog has the A-10C “Warthog” name (of U.S. Air Force fame) all over the two independent units. Built to specifically mimic the control layout of the Fairchild Republic A-10 Thunderbolt II, lovingly nicknamed the Warthog for its piggish shout an ability  to still move after taking massive punishment (seriously, the A-10 is a flying tank…), the HOTAS Warthog system is one of the most impressive peripherals I have laid my hands on. Read on for my thoughts on the device. 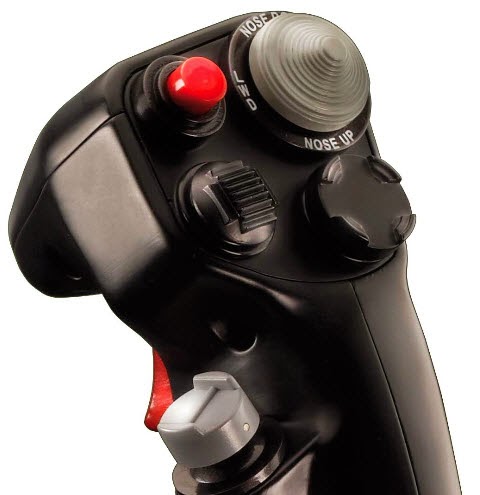 The HOTAS Warthog is not a device for the squeamish, nor is it a device that I would recommend new users pick up. The amount of switches (and what they mean) can cause paralysis brought on by over-exposure to awesomeness. There are 19 inputs on the flight stick itself, with another 16 on the throttles and another 12 on the control panel (not including the dials for sensitivity and slider 0 axis); the sheer number of options can scare even off-again, on-again users away as there are a ton of options. What makes it even more daunting is that each switch can be individually mapped in modern games like Elite: Dangerous or other older games like X3: Albion Prelude (though, some work on my part was needed for that one).

Some games, like Starpoint Gemini 2 allows each switch to have essentially two options mapped to it, meaning that you can have an option for the “on” position and an option for the “off” position; customization in games can be a daunting task to any outside of the enthusiast crowd. Fortunately the layout simply makes sense and everything is in reach, assuming you have normal-sized hands. I did find that the Trim Switch, which is at the top of the flight stick, was just a hair out of the reach of my thumb, though I cannot fault the machine for my tiny little hands. On the throttle and control panel though, even with the throttles not-locked, I had no issues reaching all switches, from Auto pilot to the fuel switches, I had no issues. 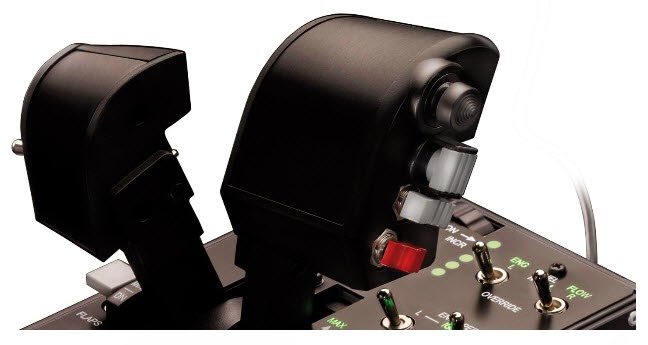 The hardware and customization can take hours to set up and familiarize yourself with, for me personally it took about two hours of fine tuning in Elite: Dangerous’ most recent beta but once I was set up I was ripping through space at break-neck speeds with no issues. Other, older titles like X3: Albion Prelude would only recognize a single “side” of the entire HOTAS system at once so I had to download a handful of mods and patches myself and get them up and running in order to use the flight stick, throttles and control panel; I found that a little surprising though, given the HOTAS Warthog has been around for a number of years I had hopes that a series of games as prolific as the X franchise would have built-in support for the full device. It was not too much trouble and was in no way the fault of Thrustmaster, all that Thrustmaster did was only give gamers and simulation enthusiasts the best piece of hardware imaginable.

After customizing your setup and getting into your chosen game or simulator anyone familiar with your keymapping can sit down and be off and away. Ergonomically speaking the HOTAS Warthog fits right up there with that well-worn and super comfortable couch; the flightstick molds into your hand and has curves in all the right places. The throttles and control panel are intelligently laid out and within easy reach whether you are at full throttle or at idle, which really defies the senses given the sheer size of the control panel.

Regardless it is comfortable and I found that during long flights I would rest my wrist over the throttle in a fashion very similar to how I drive my car (which, mind you, is a manual (because that’s how real men drive) thus requires me to almost-always have my hand on/around the shifter); it was surprisingly comfortable and after nearly 30 hours in flight stick-enabled games over the course of four days I felt absolutely no fatigue whatsoever, all due to the brilliant ergo’s of the HOTAS Warthog. 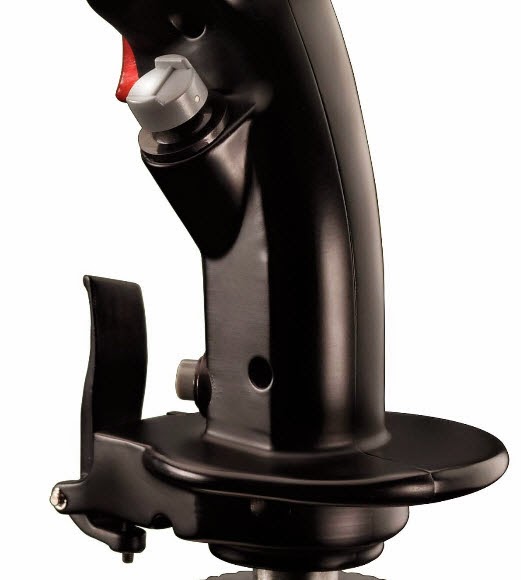 In my time with the HOTAS Warthog by Thrustmaster I have come to fall back in love with the finer things in life and at the higher price point, this system is certainly one of those finer things. Being large and imposing, the flight stick, throttle, and control panel all mean business and for those that are unwilling to learn, you will be swallowed up and spit up by the raw essence of the HOTAS Warthog. Large and daunting as it may be, once you get settled into a groove you will realize that your gaming experiences become a bit more sublime, more detailed and more relaxing whether you are playing Microsoft Flight or X-Plane, or if you are in a massive space battle in Elite: Dangerous or you are zipping through space as a small M3 fighter while capital ships are raining lasers, plasma, and missile exhaust in X3: Albion Prelude.

The HOTAS Warthog is simply stunning for fans and enthusiasts like myself. On the downside though this is a massive beast that requires time and dedication to map out and learn; not to mention one could purchase a well-to-do computer or a next-generation console for the same price. Regardless, the HOTAS Warthog by Thrustmaster is a pinnacle of engineering and shows why it is that Thrustmaster sits atop the flight stick world; it is simply a work of art.