Baldur’s Gate: Dark Alliance introduced me to console action role playing games. It must have been a memorable experience to play this game back in 2001, when the PS2 was still young· I bought it later but still was impressed by its appealing graphics, epic music and highly addictive action.

Despite its name the game is not connected with the monumental Baldur’s Gate 1 and 2 on the pc. The plot, dialogue and characters are not nearly as developed, the combat system is less deep, you control only one character, the world is smaller and your progress is linear. As in all action role playing games the story is mostly an excuse to leave the safety of town, wander in the wilderness and kill hundreds of monsters to gain experience and become stronger. 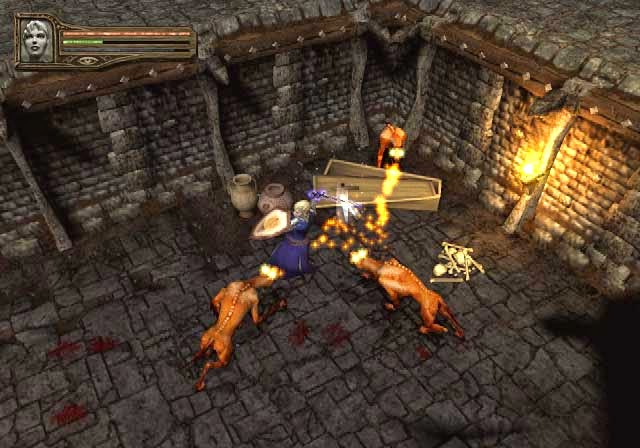 The story is about a mysterious alliance that threatens Baldur’s Gate. Of course you are the hero who protects it. You can choose among three characters: the dwarven fighter, the arcane archer, who fires enchanted arrows, and the sorceress. Unlike normal role playing games that take place in the Forgotten Realms, here the sorceress is very effective in close combat. This kind of freedom makes the game less strategic but helps you play any way you want. Besides fighting you will spend your time exploring desolate places and collecting loot. Normal enemies appear in small groups and become dangerous only if you are careless. Unlike pc action rpgs, you always hit your target no matter how high its armor is and you have some simple combos. The bosses will force you to consume some potions to survive and use your special abilities. The level design and action are enriched by simple puzzles and hazards, e.g. levers that open locked doors or jets of hot steam pouring out of metal tubes.

The variety and effectiveness of skills (‘feats’) make the gameplay more versatile. Passive feats are always on and require no mana consumption. Some of them are available to all characters, e.g. meditation, which increases the regeneration rate of your magical energy. Others are shared by the arcane archer and the fighter, e.g. improved critical raises your chances of delivering a critical hit. Lastly, some belong to one character only, such as deflect missiles, which helps the archer to avoid arrows, javelins, etc more easily. Active feats need to be selected from the feat menu and activated in order to take effect. They are character-specific and most of them are offensive. I finished the game with the sorceress two times, each time focusing on a different spell (ball lightning is great).

The graphics are one of the main reasons I love DA. Every area is drawn with imagination and attention to detail. You would expect places like the sewers or a cellar to be boring but this is not the case. The colors, light and scenery make every stage look unique. Take for example the crypts: rooms are dimly lit by lanterns, coffins and piles of bones are lying around and horrible undead come out of the earth to devour you. The visual effects, e.g. the flickering of flames, make your surroundings more realistic. Cut scenes move the story forward and give you an idea of what you will face next. 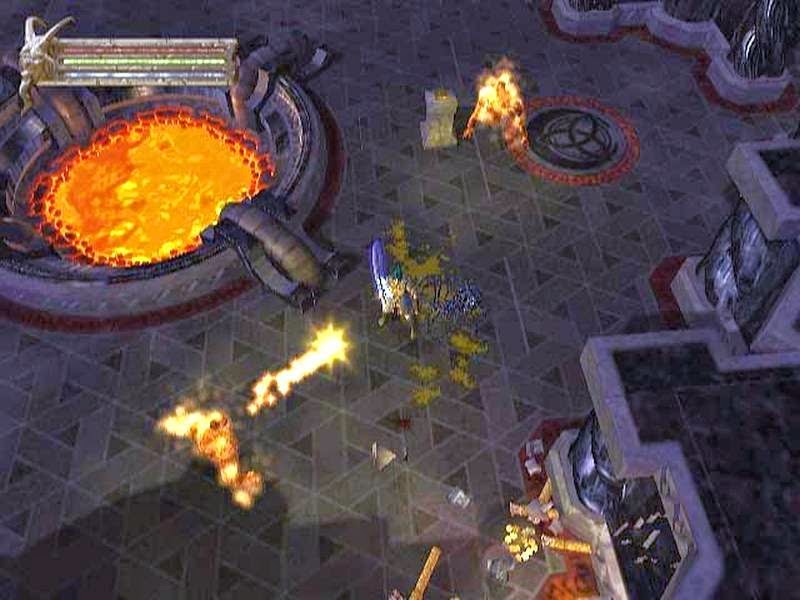 The music is fantastic and has a cinematic quality. The sound effects, e.g. the monster growls, add to the experience. Characters you meet often have voices and the actors employed have done a very good job.

The control is perfect. You have separate buttons to attack with your currently equipped weapon, cast a spell, jump, interact with the environment or talk to someone, block, drink a health potion or mana potion, open the map, open the interface or pause and change some game options (sound, controls, text on screen). The left analogue stick is used for running and the right for rotating your view. Lastly, the directional button allows you to see all your available feats and switch between a melee weapon and a bow. The map shows your position, the exits and save points. The interface is organized in six pages, including your inventory (weapons, armor, potions and precious items), quest log and character sheet (level, primary attributes, damage you inflict, etc). The last page shows all the available skills of your character class, the ones you have chosen and their rank (the higher its rank the more effective a feat is) and the remaining points you can allocate to feats (the cost to level up a skill increases gradually).

The game has very few drawbacks which detract from the fun slightly: a) You cannot zoom in so you always watch things from a standard distance. b) The city of Baldur’s Gate is small and has no places to explore. You cannot talk to its citizens either. c) There is little challenge, since you can find or buy and carry dozens of potions. d) Some skills look good but are weak even when you upgrade them (e.g. the sorceress’ burning hands).

Dark Alliance kept me interested until the end thanks to the variety of locations, the fast combat and the opportunity to play as I liked. Easy to play, addictive and made with care by talented people, it is one of the best games available on the PS2. I recommend it both to beginners and experienced dungeon explorers.