I struggle to remember when it is that I first became aware of Fraps though I believe it was around the CounterStrike 1.4 release, which was in early 2002 (though I may be wrong). Personally I did not use Fraps until a few years later, when I was fairly large into the CAL-I and CAL-M leagues for CounterStrike 1.6. We would use Fraps to record scrimmages and gameplay then review them for match time. In the ten-plus years both the recording technologies as well as the internet have changed greatly, especially with the advent of Twitch, Let’s Play videos on YouTube, and the ever-growing montage market. With the popularity of capture devices and YouTube/Twitch gamers showing off their skills or walking gamers through difficult games, there are more and more recording applications available on the market, does the godfather of the game recording world still have what it takes after a decade of success? 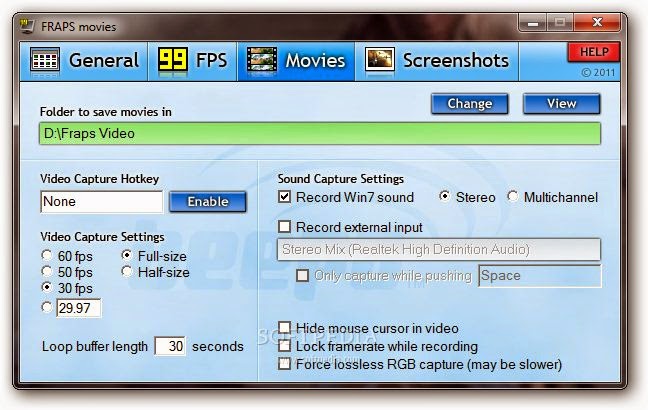 Over the last ten years or so I have spent plenty of time using various recording technologies, from full screen recording and editing suites like Camtasia Studio to Fraps and its competitors (Bandicam, Dxtory, OBS, etc.) and the one thing that I have found above all else is that Fraps is and always has been the easiest to not only use, but understand. An extremely simple interface with cut-and-dry options and instructions are easily understood by young and old gamers alike. Where Fraps started as a simple recording application it has evolved into a benchmarking tool as well as a tool for taking screenshots. I do admit that, pending on whether you are using a service like Origin or Steam, the screenshot feature is a little redundant, but if you are using a capture card such as the Elgato HD60 to record your console the screenshot tool comes in extremely handy.

One thing I noticed with Fraps is that its performance changes drastically between full screen recordings and whether they are 1080p or 720p recordings. I found that when playing Batman: Arkham Origins or Mafia II at 1080p (games that run steady at 30FPS with all settings maxed) in FullScreen mode on the test computer the framerate would drop to a fairly constant 15FPS. If I ran the games at 1080p in Windowed mode though, I would hover closer to 30FPS. If I play the games at 720p in full screen mode without Fraps running I would run steady at 60FPS without dropping a single frame, but when I turn on Fraps, even using the 60FPS setting in it, it would only run at 30FPS.

Switching to a Windowed mode has the game running at a fairly steady 35 – 45 FPS, which is a marked improvement over the 1080p recordings. Note that the machine I am running these titles on is powered by an Intel Core i7, 8GB RAM, and an nVidia GT650M so there is plenty of power to work with. One of the more commonly known points about Fraps is that is is a bit of a resource hog, though I do not believe it is so bad that it would severely hinder a gamer’s experience unless they are using sub-par equipment.

What some players may have issue with though, is the size of the raw recording file. Since Fraps records to a full frame/uncompressed AVI file the resulting recordings can be massive; I found that at 720p, recordings of about 50 minutes tend to be upwards of 80-100GB. Fortunately Fraps has a feature that will automatically split the recording into 4GB chunks which helps reduce performance issues and helps with any editing that may need to be done later. Given I am quite familiar with the video editing process, having massive files broken up into smaller, more manageable parcels is a blessing in disguise. While file management may be more complicated, the actual editing process is made very simple since you can load in individual sections of gameplay rather than having to index and search through a 100GB file.

When I compare the quality of the recordings that I have taken from other game recording applications to the ones that I made with Fraps I can safely and confidently say that Fraps is, without a doubt, still the king of the game recording world. While the files can be utterly massive, the relatively low impact of the recorder on the performance of games at 720p and the marginally larger impact of games running at 1080p is a sure win for most gamers that are looking to record their sessions.

I for one freak out if I have more than a few frames drop and I know I am not alone in that school of thought and when I can record content showing my prowess (or lack-there-of) without hindering the framerate to an unplayable level. The real winner though is that the recordings actually come out extremely clear and unlike some other recording technologies, actually record at or near the framerate shown on-screen. I can record Diablo III on high settings at a solid 30FPS and have a gorgeous picture, but when I use a well-known competitor to Fraps, it will show that it is recording at 30 FPS but the recording would actually be closer to 5 to 7 FPS. Fraps has long reigned king over the game recording industry and now has more competition than ever, hopefully moving forward the good folks at Fraps will optimize full-screen recordings and maybe even bring us a recorder that reliably and accurately records 4K resolutions.