Lenovo is a brand name that is commonly associated with top-quality business computers and in the last few years they have been silently pushing a new lineup of computers; gaming computers. While their business and personal use computers have always been powerful, well-built, and affordable, gamers have always want ‘just a little more power’ in their machines. Some years ago, Lenovo took their Y-lineup of home-use laptops and started putting more powerful components in them and with their success, they quietly began manufacturing a desktop lineup that was both powerful and extremely affordable. 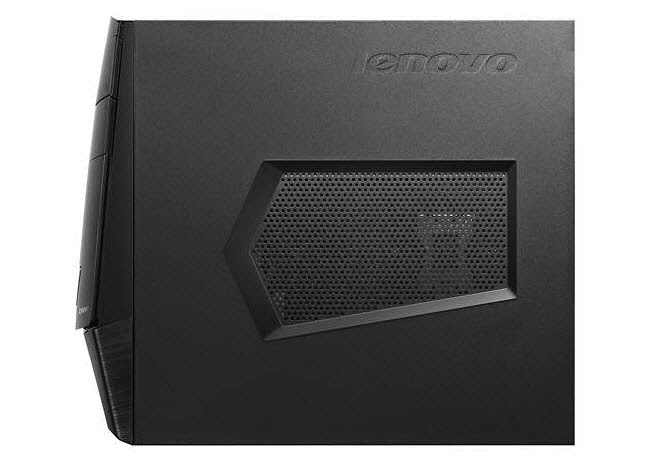 That is where the new Erazer X315 comes into play, based on AMD’s A10-7850K Kaveri 12-core processor (4 dedicated to the CPU, 8 dedicated to the GPU) which runs at 3.7GHz and powered by the AMD R9-260 graphics adapter with 12GB of system RAM and 2TB+8GB SSD disk driver, the Erazer X315 is an extreme powerhouse with a price tag that is not only affordable, but simply mind-boggling. The machine I am reviewing comes in at in at $799 (though models start at $649.99), the Erazer X315 takes affordable PC gaming from a large manufacturer to an all new level (comparable custom build runs a few hundred dollars more) of affordability vs. power. After spending some time with this wonderful little machine I am hooked so read on for more information.

Some gaming machine manufacturers (Alienware …) seem to find that gawdy-equals-gamer and in some cases that is true, but I believe the vast majority of gamers would prefer functional over a towering monstrosity with strange angles, cold-cathode neons, and LED-lighting that could signal far-off alien civilizations if the case was point up out a window. Fortunately Lenovo’s entire brand, from their basic laptops to their gaming desktops is about understated visuals with a small amount of flair. The Erazer X315 stays along the same lines of simplicity over gawdiness with just enough character to set it apart from the basic run-of-the-mill corporate desktop. Being a pseudo-small form factor case at only 11.4″ wide by 21.5″ tall by 20.5″ deep, the footprint for this little powerhouse is quite small, saving valuable desk space for massive 4K monitors.

The front of the case is slightly angled, being wider at the base than at the top and has a single muted blue button that acts as the power/reset button. At the top of the case you will have two hidden bays, one holds the DVD drive and the other houses the front USB ports, front 3.5mm speaker / microphone ports, and front-facing media card reader slots. The sides of the case have two massive filtered vents to assist with airflow, and the rear of the case has all of your standard ports packed together nicely. The finish is an expensive-looking but not gawdy pseudo-matte black with aluminum finishing near the base of the front. Aesthetically the case is extremely pleasing and one that would not cause any embarrassment were you to have visitors. Compact and attractive, the X315 is a great looking machine. 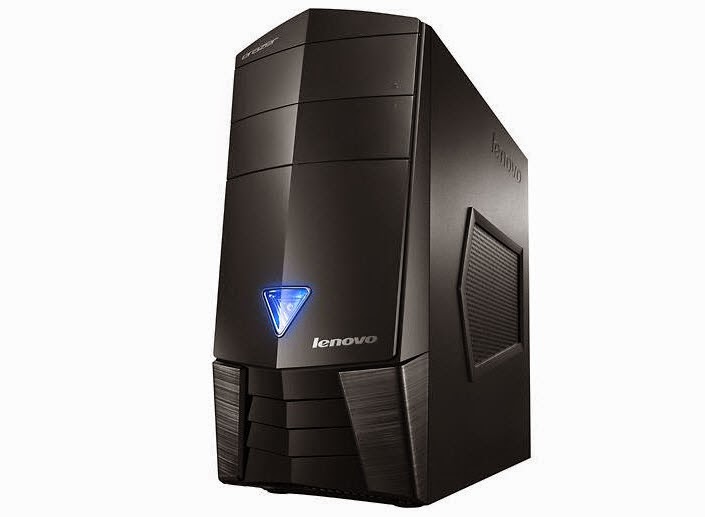 When it comes to benchmarking the highly affordable gaming rig is able to hold its own against the recently reviewed cousin to the X315, the Lenovo Y70 touch (see: http://chalgyr.com/2014/11/lenovo-y70-touch-hardware-review.html). As seen at http://www.3dmark.com/3dm/4725430 the results of the 3DMark 08 Professional test of the X315 had came in a hair below the Y70’s score (which you can review here: http://www.3dmark.com/3dm/4446129), and given the difference in the price tag (the Y70 Touch we reviewed was $1699 and the price of our review X315 is $799), the X315 pound-per-dollar is far better. Granted you are loosing out on the mobility of the laptop, but the $900 price tag difference gives gamers a massive amount of play in their choice of machines. With my personal experience so far, I would even go as far as picking up two of the X315’s in this configuration rather than a single Y70 Touch and use one as a HTPC running Steam in Big Picture Mode. Where the X315 did not do well was in standard productivity tasks (i.e. home office use) asmeasured by PCMark 8.

Scoring a 2339, fairly average and good for basic home office tasks, the Y70 Touch scored slightly better at 2603 but when compared to our Intel / nVidia machine that cost about half-again as much as the Lenovo gaming desktop, which scored a 3752, the X315 was well behind the curve. However, this machine is geared and tweaked for gaming and that is where it truly excels. Take World of Warcraft as an example, placing the settings on Ultra and playing it at a whopping 3840×2160 (4K resolution) had the game cooking along at 30FPS and only dropping to about 20FPS when in Battlegrounds or the overly crowded Auction House in Stormwind. Running WoW at 1080p in Windowed mode, I never saw the framerate drop below 60FPS while in the thick of other players and reaching a steady 80FPS while I was out soloing. Instance running was a blast as I would sit closer to 100FPS without a single drop. Other titles, like Lords of the Fallen with all settings at maximum running at 4K resolutions did not fare as well, clocking about 15FPS at the best of times and 4-5 at the worst. However, setting Lords of the Fallen to run at 1080p in Windowed mode (or full screen on my 1080p monitor) had the game looking not only stunning, but running constant at 30FPS without a single hiccup.

In addition to the aforementioned games I ran Ryse: Son of Rome at 1080p with all setting at maximum and, as expected, the game decimated the machine, running around 2FPS but when I set them to high and moved to 720p I was running at an astonishing 30FPS during gameplay, far better than the sub-10 FPS that I got on the Y70. Setting the graphics to medium though, did not improve the performance at all, as it stayed around the same 30FPS so I am not entirely convinced that it is a hardware related oddity, but rather an optimization issue with Ryse. What was most exciting was running Dark Souls 2 on the Samsung U28UD590D 4K monitor is just … wow. Stunning. Fast. When I think of gaming on a PC, and looking for that optimal experience, this is what I think of; 30FPS+ at 4K resolution with everything on maximum. 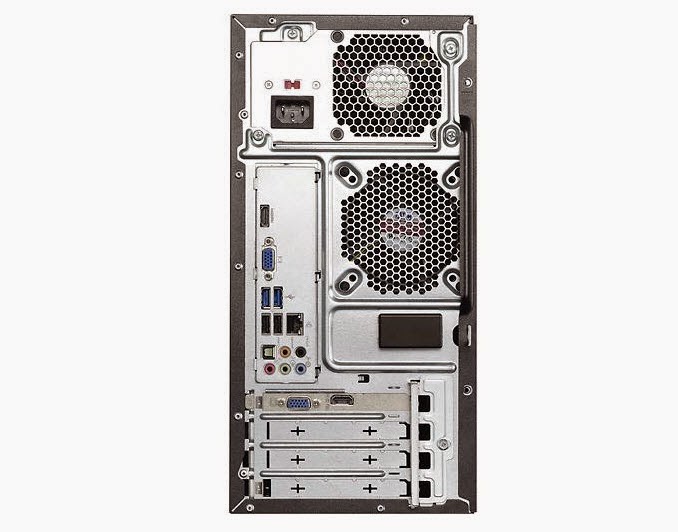 It is a gorgeous experience and one that can be attained with a low-cost investment into a high quality gaming rig. Some of you may be thinking that a PlayStation 4 or Xbox One can do the same thing and it costs half as much and it is true those systems, which are both great systems can do that, but the game library for the PC dwarfs all of the consoles combined. On top of that, there is the flexibility of modding, which extends the life of a game like Skyrim well beyond its expected lifespan. The Lenovo Erazer X315 unlocks the potential of hundreds of games and plays them all beautifully without costing $1,000+. Being that I have been building computers for years without much thought for mass-produced gaming machines, I am actually quite shocked at how impressed I am with this little gaming desktop.

I am so impressed with the build quality of the Lenovo Erazer X315 desktop that it is difficult for me to not simply run out to the store to by this weekend. From the toned-down appearance to the veritable powerhouse components, the X315 is a bargain when you compare its power to its price. porting some of the finest AMD-made parts, this particular Erazer is a little beast that offers superior playback without breaking the bank. Some of you may want to simply purchase the components and piece together  machine, which is wonderful, but for the younger crowd, the disinterested crowd, or the “I’m-to-Busy” crowd (like me) the Erazer X315 is a wonderful alternative.

Attractive, powerful, affordable, and comes from one of the most trusted names in the computing business. While it is not an ultra powerful machine that will run any game under the sun at 60FPS+ at 4K resolution, the Lenovo Erazer X315 will provide you with a wonderfully playable experience, commonly at 30FPS or more, without being gaudy or overpriced. I for one am very tempted to pick one up and I hope you are too; I am quite impressed by this little rig and as I continue to throw more titles at it, the Erazer X315 just chugs along.