Assassin’s Creed: Unity is Ubisoft’s first foray into next generation-only territory with the Assassin’s Creed franchise and while it has been met with plenty of criticism, their push into next-gen territory is not a wholly unpleasant experience. Following the steps of Arno during the French Revolution, you will take on your old nemesis the Knights Templar through a memory-diving device called Animus created by Abstergo Industries. As you go “back in time,” you will be tasked with preventing (or accomplishing) the bad guys from doing bad things, which is pretty typical. For those new to the series, which would be no small feat, you will be free-running through a densely populated Versailles and Paris, brushing up against dozens upon dozens of people as you work to chase down targets or escape the ever-present and extremely vigilant guardsmen. Putting aside the initials troubles that Unity had which were largely addressed by a nearly-1GB patch. 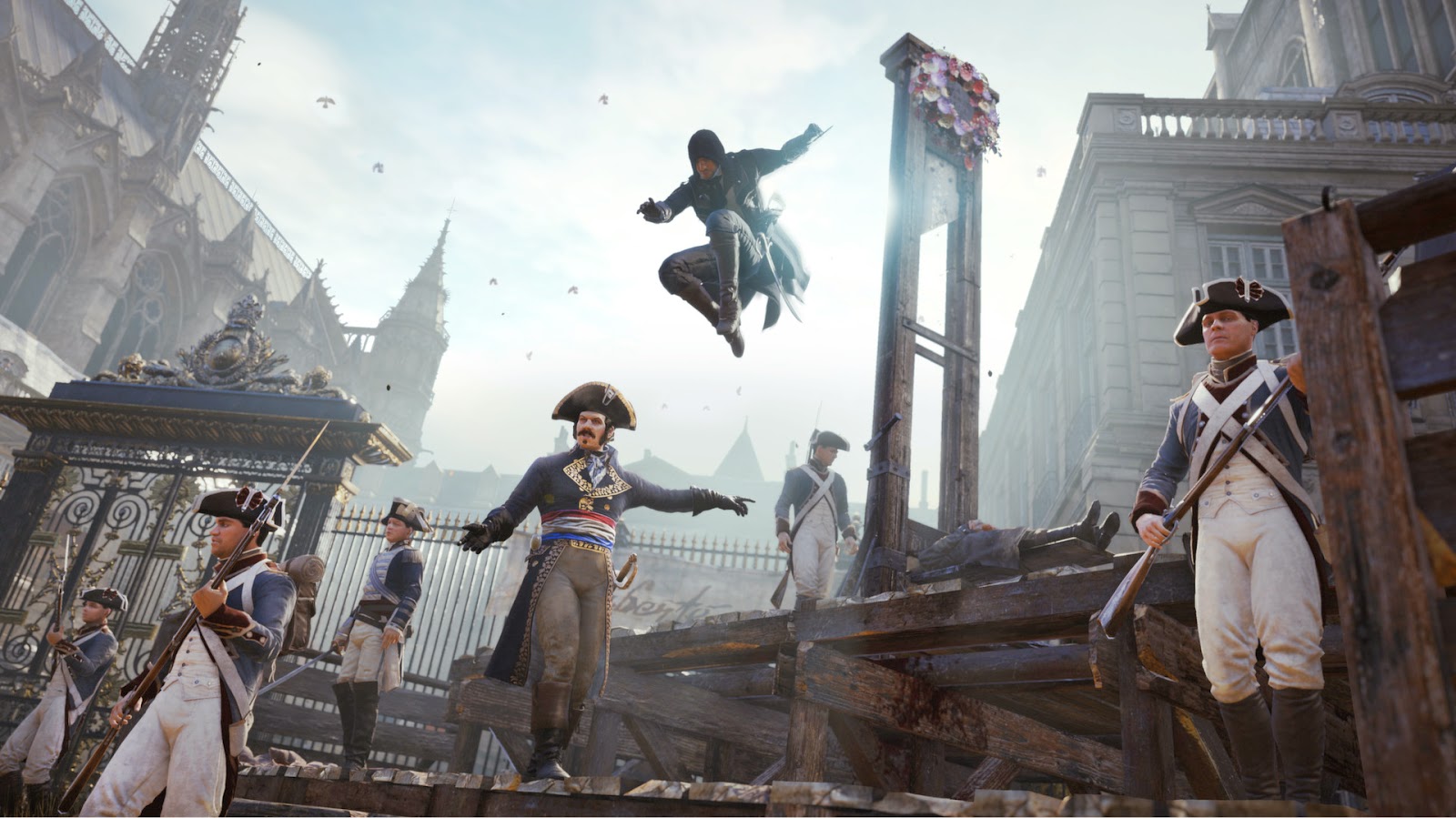 I long felt that Ryse: Son of Rome was one of the nicest looking titles out there and then along comes Unity… While Ryse has a very cinematic feel to it, the game is quite linear and if one thing can be said about the Assassin’s Creed franchise it is that it is as far from “linear” as one can get. Granted you do not have quite the freedom that you have in Watch Dogs or in the Grand Theft Auto games, but it is still a very open and very large game. Ubisoft’s restriction to 900p suits me just fine, given I am playing on the Xbox One, and Unity has some of the greatest facial-expressions and lip-syncing I have ever seen in a video game. Period. I was immediately struck by how real it all looked while nearly every single character spoke; brows nit, cheeks and jowls move appropriately and man, those lips are so cleanly synchronized to the words that it is so amazing it borders on creepy.

The “uncanny valley” only hit me a few times, namely with the children but outside of that all I can say is “holy crap.” On top of the top-notch syncing you have a gorgeous re-representation of Paris and Versailles from back in the late 1700’s and it is full-to-the-brim of people. Early E3 shots had shown piles of people in the streets and marketplaces are absolutely packed with flesh-and-body NPCs that simply go on about their business. I have never, ever, felt that a city was so alive (the closest competition would be the Definitive Edition of Sleeping Dogs and even then it was nowhere near as impressive as Unity) and simply walking the streets of Paris is an absolute joy.

Some may complain that having so much on screen would hurt the framerate but contrary to popular belief, framerate issues that I experienced did not happen around large groups of people, but rather I would see a drop of about 5-6 frames on occasion while running over the roof tops (and it would only happen for a moment). The one big stickler that I have is that camera control seemed a little clunky at times, as the camera would move to strange angles when you were moving (or god-forbid, fighting) in narrow alleys, but that is less of a graphics issue and more of an oddity surrounding the layout of the cities. 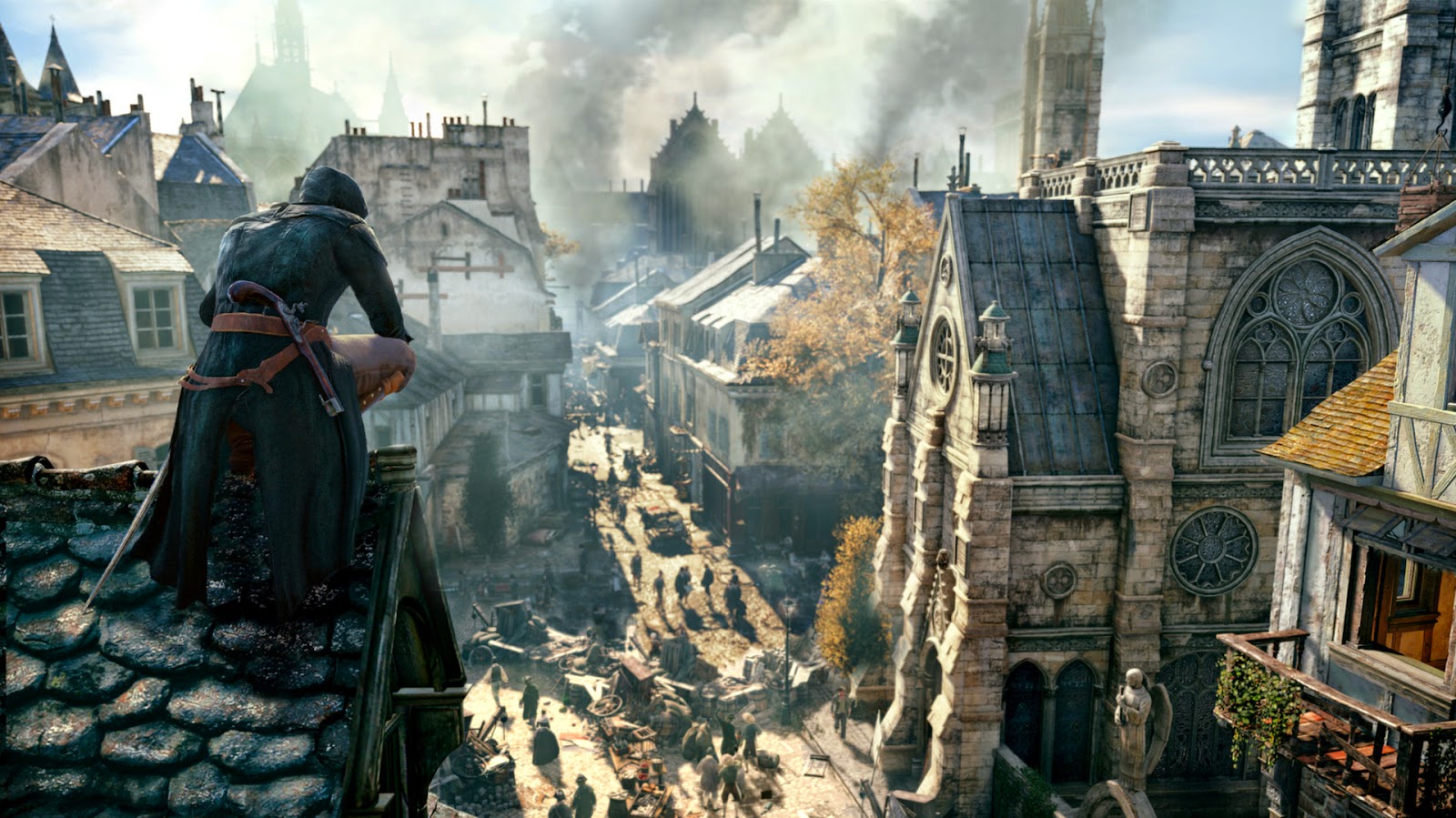 While the lip-syncing was utterly terrific the most confusing aspect of the audio lies with the actual voices. Apparently in the late 1700’s and early 1800’s nearly every single person in France spoke not with a French accent, but rather an English accent. For a game that is trying to suck you in and not let you go, the audio breaks any sense of immersion that one might have. Neat interactive features as well as sprawling and interesting landscapes are certainly important when it comes to immersion, but bad or misplaced audio can break that in a heartbeat. Now, do not get me wrong, the voice acting is strong, full of emotion, and extremely well done but the lack of well, any French is a bit disconcerting. My jaw hit the floor when I was about 10 minutes into the game an nobody had a French accent; I mean, take two minutes in Assassin’s Creed 2 and holy cow there is Italian all over the place (that game alone is my reason for adoring the Italian language).

I mean come on Ubisoft you have provided some excellent and immersive audio in the Assassin’s Creed franchise and you cut some pretty wicked corners by just assuming we would not care that nobody in France actually speaks French. As mentioned though, the voice acting is actually really good, it just feels like a massively missed opportunity that could have been easily rectified with a little more planning. Fortunately the quality of the voice acting almost makes up for it but when you compliment the (English) voice acting with a really good soundtrack, well things start to look up. 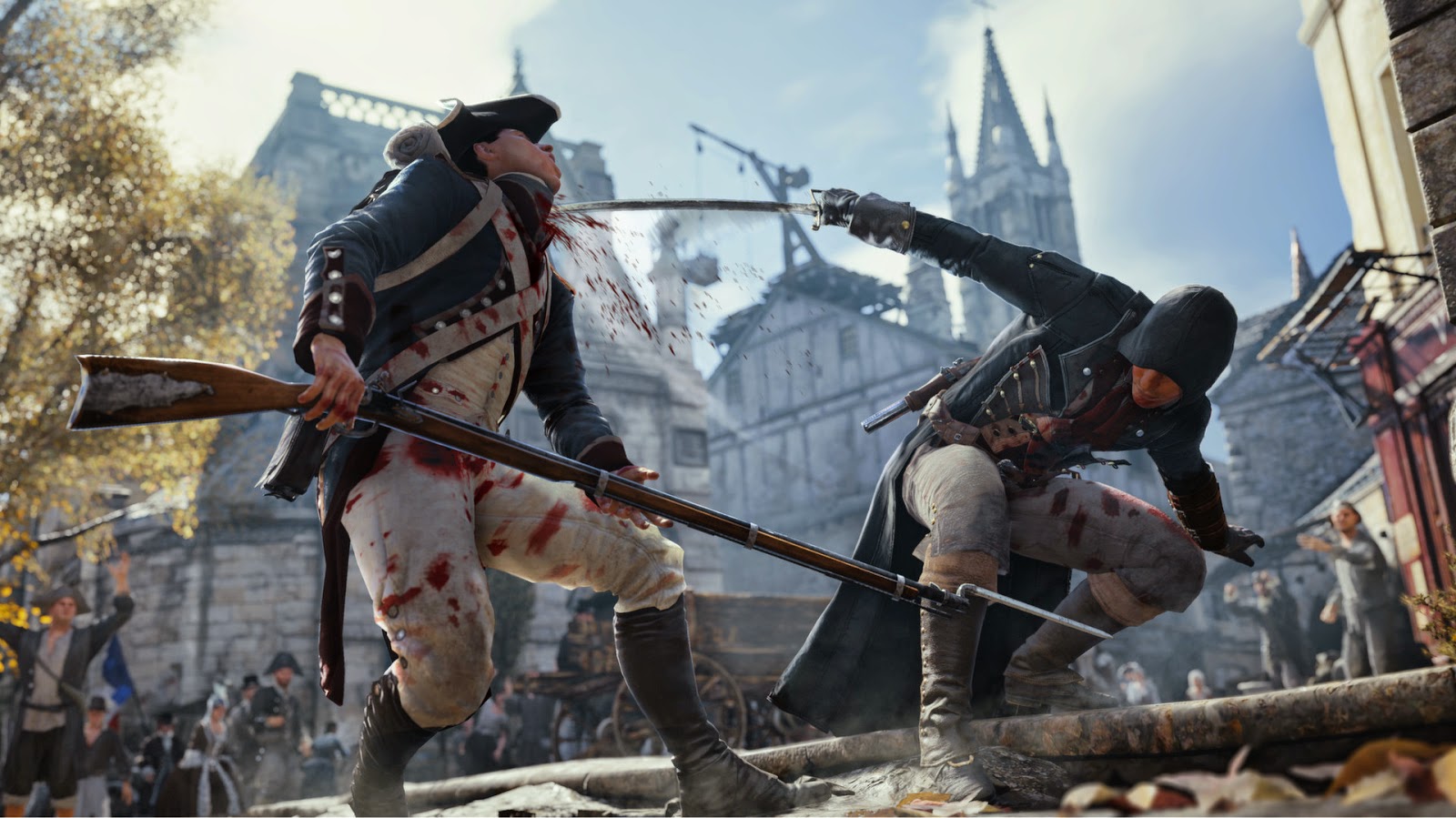 Normally in these large open-world games I am more interested in hearing the buzz of humanity around me but I will not lie, I really like the scores used in the soundtrack for Unity as it kept me busy and help accentuate the sheer size of the various cities that you will visit. While upsetting that there were few, if any, French-speaking citizens in France, the quality of the audio almost makes up for it.

Now graphics and audio are important but how does it play, you ask? Well, to be honest it plays like a floaty Assassin’s Creed game. Free-running (or Parkour if you must) is in full swing and done well for the most part, but what I found most disconcerting is that you do not feel ‘grounded’ to the environment; almost like you are running through water at times. It is very difficult to explain, but as you are running across the rooftops of the city and you leap out to a cable or wire that connects two buildings, you may think “oh jeez, I’m not going to make that” then suddenly you do a bit of a horizontal slide and you miraculously land the jump.

Other times you will try to make that same jump and you will plummet right to your eventual death. It is a weird sensation that sticks with you through the entire game and is at its worst in combat. Now, I understand you are an assassin and being sneaky is kind of key, but there are times where you will absolutely get into a sword fight and, well, you will die. Often. Being absolutely and utterly precise is key; if you go through and dodge too early, no matter how far you roll away from your opponent, as they complete their swing they will slide across the ground and it will connect. This happens 100% of the time if you do not tab the dodge button JUST before their weapon hits you. There was one point where my dodge took me off of a wall and onto the ground behind the wall (with the guard on the other side) and they slide over the wall and into range and turned me into a puddle of goop. Disconcerting and a bit lazy on the design if you ask me. However, I found that other mechanics in combat are, well, awesome. 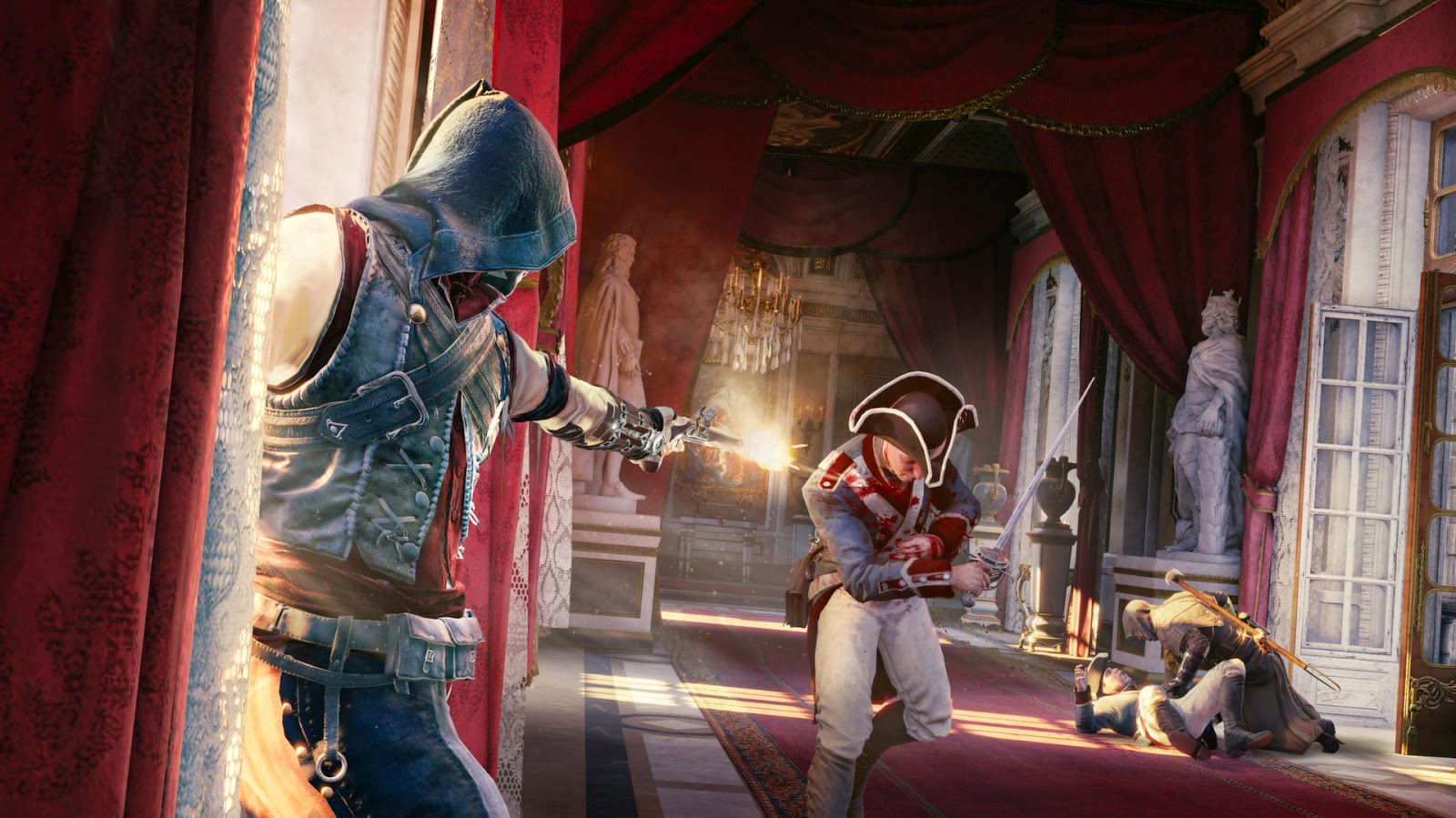 There were a number of times where I would be in a sword fight and I would turn tail and run as I saw more guards coming up and I would run through a group of revolutionaries only to turn around and see that the guardsmen and the revolutionaries were duking it out, allowing me to then climb a nearby vantage point and watch the chaos unfold (in this case the guardsmen got spanked and the revolutionaries all took off in different directions). Assassin’s Creed: Unity is absolutely full of glorious little moments like that which really show how the world surrounding Arno works. In a time period where tensions were extraordinarily high, seeing small-scale skirmishes like this come to life is great. Given how poor I felt the combat was, my entire playthrough consisted of me trying to figure out how best to proceed WITHOUT getting into fights and when you sit down and think about it, assassin’s were more interested in getting their mark than they were in whipping around a battlefield like a crazy person.

There is a lot that a reviewer can say about Assassin’s Creed: Unity; by now most of the gaming population has some inkling of some of the controversy that surrounded Unity when it first launched. From what the larger sites are referring to as “weaponized embargoes” to the technical glitches (that frankly, plague most games these days, case-in-point, nearly every Elder Scrolls game is launched with laughable bugs) to the issue-that-is-not-an-issue of 900p resolution. Other than this short statement, there is not much to say on it other than try the game for yourself before immediately jumping on the bandwagon of haranguing a studio just because some guy said something some time on some forum. Admittedly, Assassin’s Creed: Unity has its faults, but in truth?

It is actually a decent game; not the game that Ubisoft needed, but let us not discount that it is actually an enjoyable title even with some oddities. I personally had a good time with Unity and outside the ‘floaty’ feeling of movement and the sub-par combat, the story is alright, the graphics are amazing, and the game, over-all, fits right in with the whole Assassin’s Creed franchise. While I had some gripes with some shoddy combat and could not quite get used to the weird movement issues, Assassin’s Creed: Unity is still a good game with a few redeeming qualities. While it is definitely not going to be on anyone’s top ten list, it is certainly a game that is worth a small investment (i.e. sale) which will give you a few dozen hours of good entertainment.