I first caught wind of Distant Star: Revenant Fleet back in September when some teasing images were released along with a basic synopsis of what the development studio, Blazing Griffin, was trying to do with it. Given that it is a space-based game, I immediately wanted to get my hands on it, on account of my (un)healthy obsession with all things space and see if it could turn around my intense and well-founded dislike of all things rogue-like. My recent review of Dungeon of the Endless, a well-made game, explained that there was just too much going on and that the way that the game felt overall, simply turned me off of the genre. Lo-and-behold a small development studio is looking to change my opinion of the genre by placing a rogue-like in the one environment that I cannot get enough of: space. 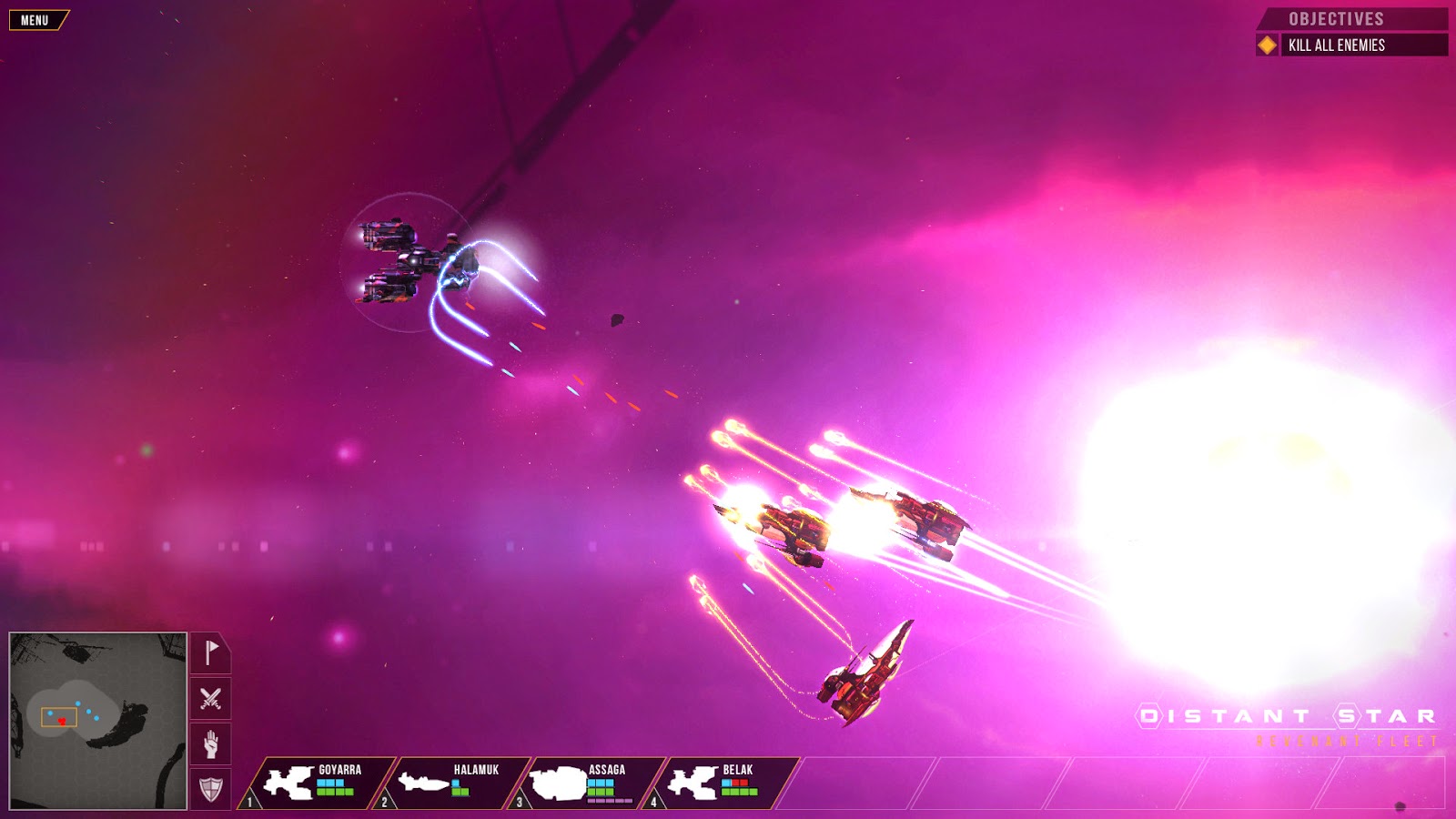 The story is an interesting little bit, which is fairly odd for a rogue-like, most are simply “here is a dungeon, go spelunking, come out with loot.” With Distant Star: Revenant Fleet though, you are part of a race of spacefaring people that oversee the protection of something called the Arc, an alien artifact of immense power that allowed for greater space travel, though its has also caused the Akari (the race that you belong to) to be embroiled in war. Your task is to put together the last bastions of your people that are spread throughout the galaxy to build your people back into the spacefaring race it used to be. My alpha access is very, very early in the development cycle so there are plenty of features, ships, upgrades, and areas to come, not to mention there may be bugs and other issues that will pop up, so be forewarned.

I love the look of Distant Star; the backgrounds are absolutely stunning and when viewed on a 4K monitor, the stars pop, lighting is stunning, and the debris floating through space just looks awesome. The backgrounds look to have a semi-paralax effect to them so pending on where you are looking the focus changes ever so slightly in perspective and with the appropriate use of lens flares, they have a level of depth that is quite nice. While the backgrounds are great looking, the various stations or large broken husks of massive capital ships (which can be used as cover to ambush enemy patrols) seem fairly basic and a little lacking, and on more than one occasion, felt like there was a bit of copy/pasting happening with the doodads.

I am sure though, that as development continues more assets will be added to the game and thus reducing some of the repetitive feel to it. Environments and the like are important, but I will be honest, I am in it for the ships and oh boy, the ships… I love some of the ship designs that you can choose from; they all look very threatening and like they could be truly space-worthy and the enemies fly around in these bulbous and very Covenant-inspired looking ships. I find that having ships look similar to the Covenant from Halo sparks my immediate “must destroy” response; it is a welcome feeling. 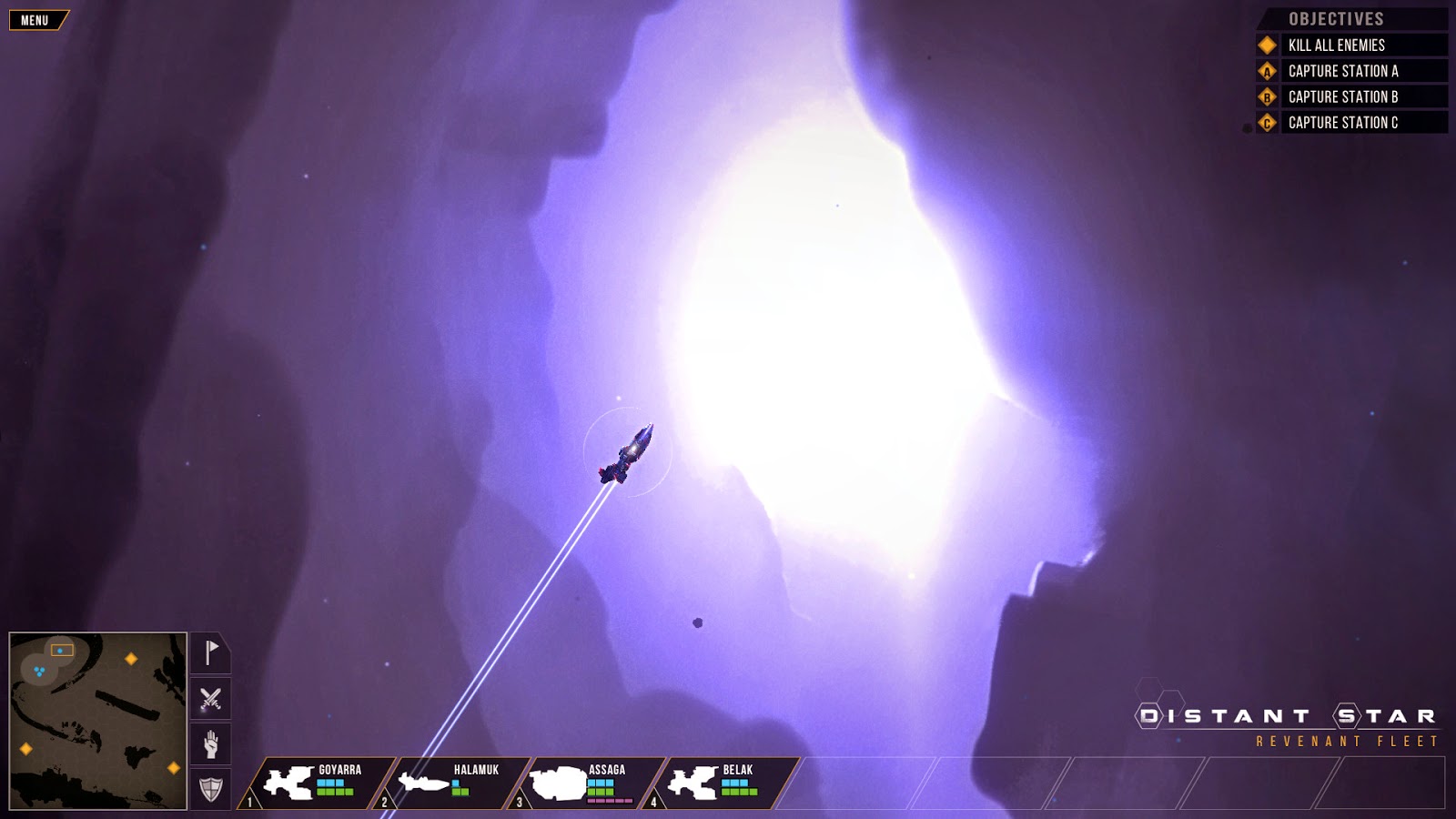 Mind you, the design is not a copycat, just the bulbous appearance and almost ‘shark-like’ shapes simply remind me of the Covenant cruisers. One thing that did make me squeal in delight was the way that rockets look; the streak out from the sides of the spacecraft and swarm all over the enemy ships, causing their shields to flare and eventually breaking through to the hulls. It is a glorious thing to see and my only wish is that I could have hundreds of units on screen at a time, not just a total of 9 ships (or so, pending your build outs).

The music is great and contains some sweeping scores that really drive home the size and scope of the game; while not large in the same respect that a title like Dragon Age: Inquisition or Grand Theft Auto V is, Distant Star: Revenant Fleet is by no means a small place (there can be a few dozen different procedurally generated areas to visit at any given time). Having audio to back up the feeling of endlessness is a recipe for excellence and Distant Fleet covers it will. The voice acting is good, though I have heard better in larger titles, but given the small size of the development studio I am quite shocked (in a good way) at the level of professionalism that the voice actors portray. A welcome change from the norm where small studios have lackluster performances that are flat and leave much to be desired. There could be a little more work on ship sounds, adding a bit more depth to them, but all in all I am quite pleased with where the audio is at such an early stage in development; after all, alpha access is generally used to test gameplay mechanics and the “posh” is generally added as the development cycle continues.

Distant Star: Revenant Fleet is first and foremost an RTS-Strategy hybrid, focusing more on the RTS aspects than its iOS counterpart (Distant Star was originally available on iOS devices and was more of a strategy title) though there are some heavy rogue-like mission elements. Honestly it is a blend that works quite well, though I was not able to feel the full effect on account of this being an extremely early build. The real-time strategy aspects are in full order though, allowing you to manage your small fleet between jumps (i.e. moving from one scenario to the next) by purchasing more / different ships, power ups, or different weapons that will allow you to customize your individual ships. Currently there are a handful of options, but from what I can see there are a number of planned additions, so hopefully the ability to outfit different ships with different loadouts will be a bit more interesting since right now it is pretty cookie-cutter. 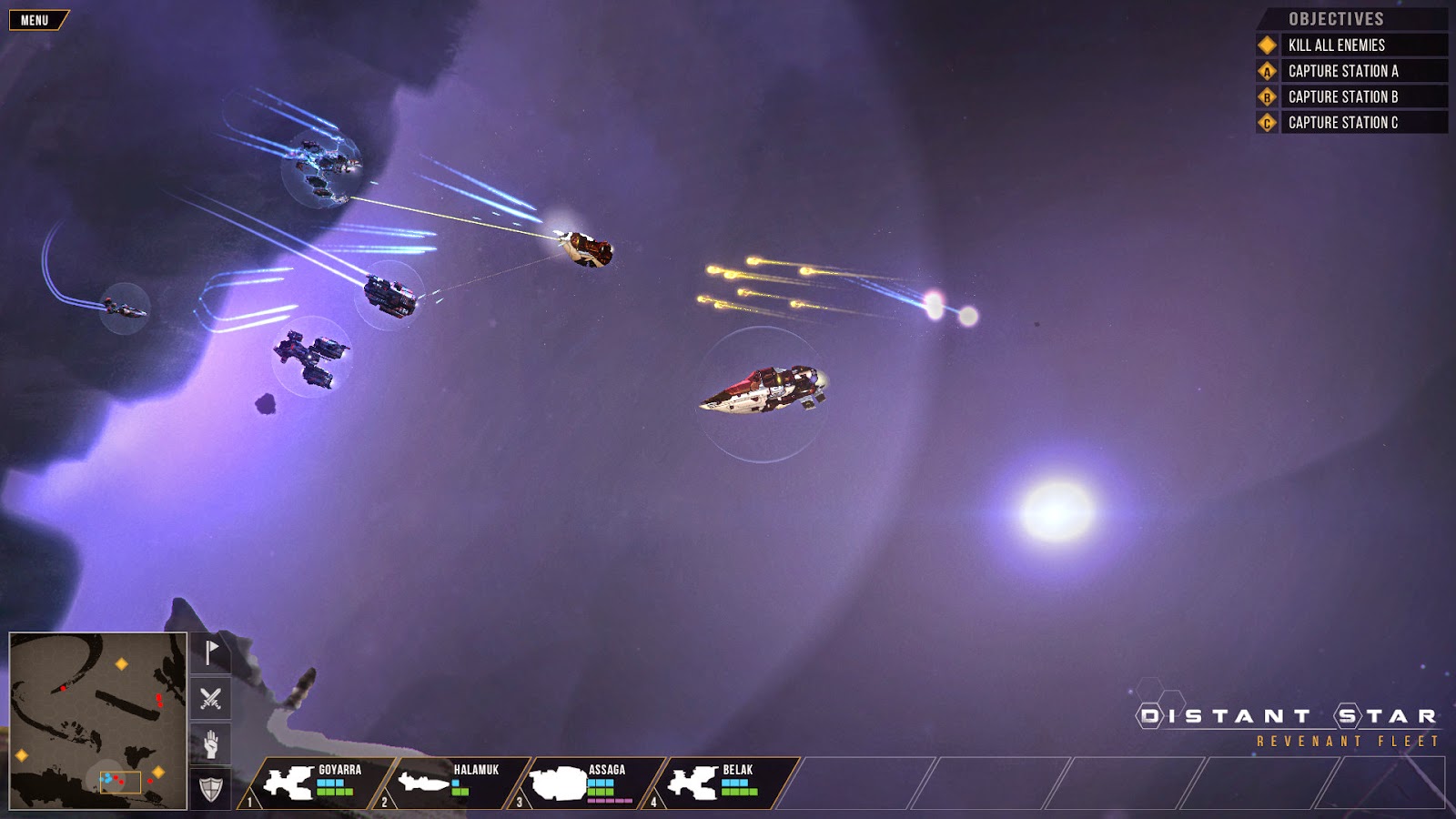 Using the debris that is floating throughout each sector, you can set up small ambushes to great affect, springing from the shadows of the derelict spacecraft allowing you to get in a few precious shots that can mean life or death. There are plenty of times though, that there will be wave upon wave of enemies that can wear down your ships, so maintaining tight formations is paramount, otherwise you will be overwhelmed in no time. I would like to see them add something akin to a scuttle button that would cause ships to break off in random directions saving them from the numerous area of effect attacks that you will be bombarded with. On top of a scuttle function, locking your units into a formation would be an excellent feature, allowing for synchronized movement and firing, which can add another level of tactical gameplay to the mix.

Overall Distant Fleet: Revenant Star is worth a look if you are itching for a light RTS with solid Strategy and Rogue-like features built in. I will reserve judgment on whether this title saves the rogue-like genre for me, but early impressions certainly have me hopeful. Though early in development, there is plenty of development completed to allow a good sense of the game and I highly recommend you head over to Steam to help Green Light this great, if young, title (see: http://steamcommunity.com/sharedfiles/filedetails/?id=341433138). I for one will be eagerly waiting for updates to the game and am very much looking forward to a final release. So far, Distant Star: Revenant Fleet has my  eye and does not look to be letting go of it any time soon. 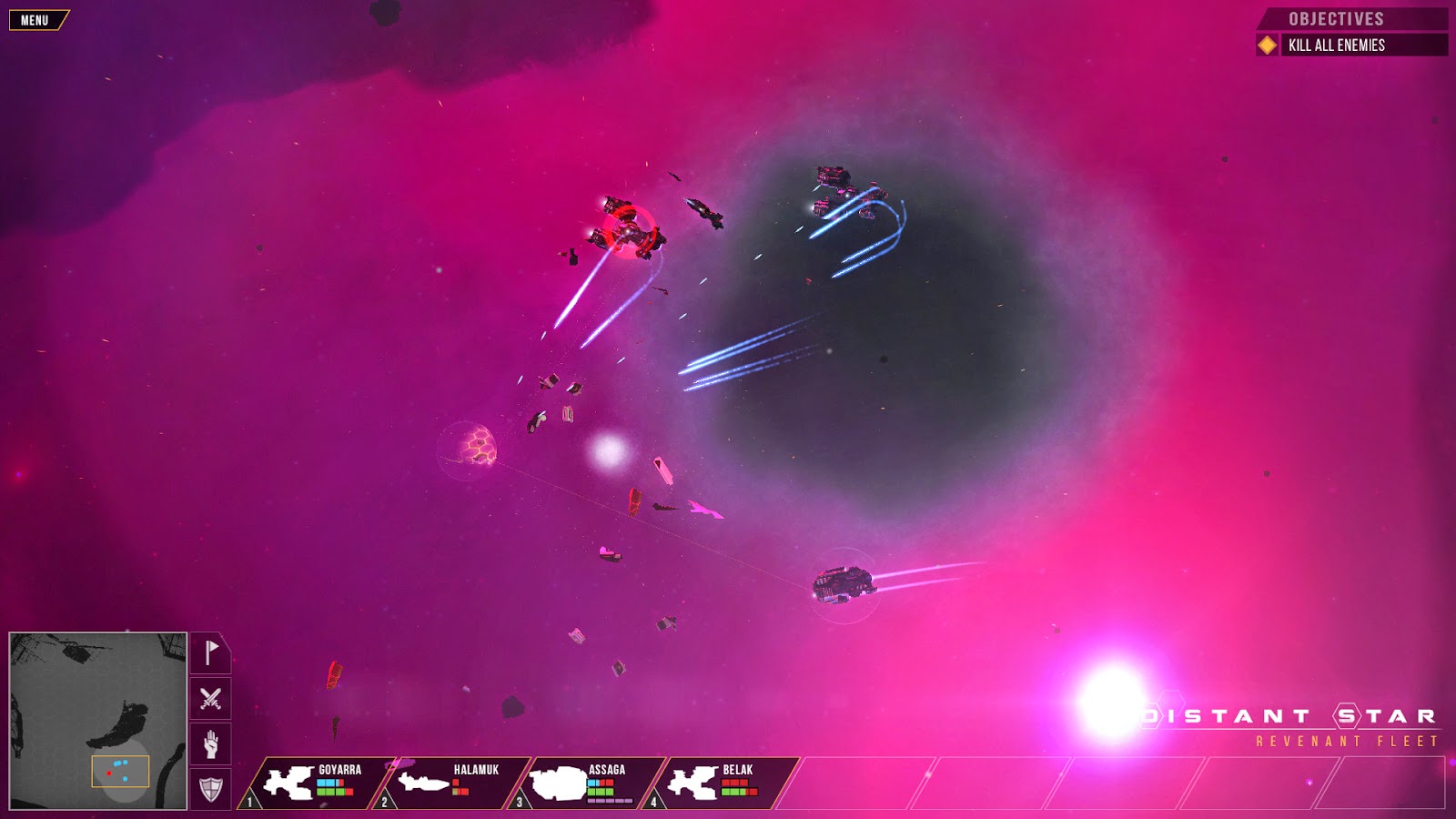