Twin stick shooters have been around forever, so coming up with new ways to iterate on the genre can be a challenge. Often they wrap around some sort of leaderboard where you fight through endless waves of enemies and try to score better than your buddies. Others have a sort of story or progression (Smash TV springs to mind) that you are trying to work through. No matter the theme wrapped around it, the basic game is still the same: move with one stick, shoot with the other and stave off hoards of enemies that are trying to kill you. After that, it becomes largely about execution, and on that front Geometry Wars 3: Dimensions does an excellent job. 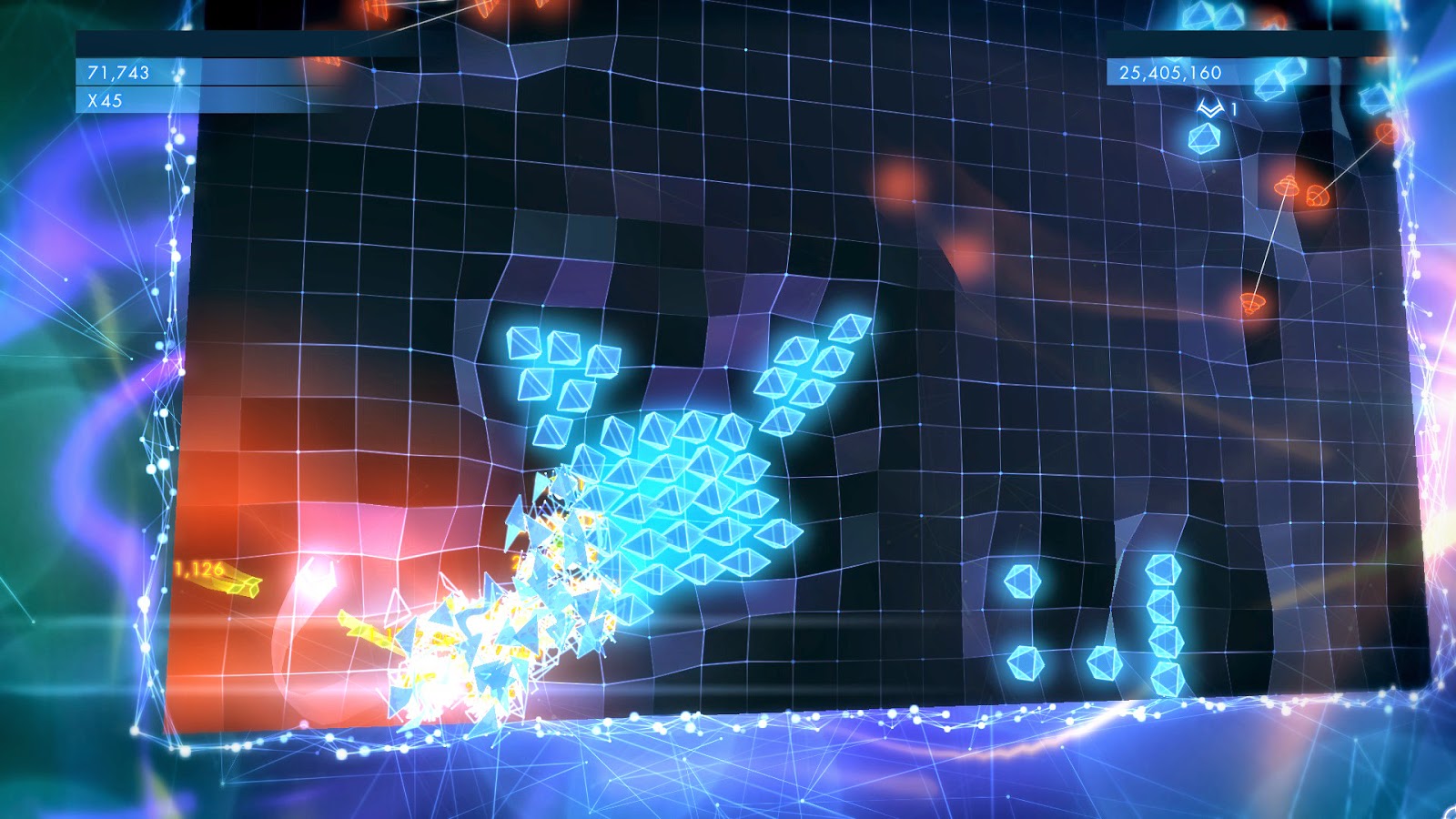 My first Geometry Wars was the first downloadable title I picked up for my Xbox 360 several years ago. I had several friends who were playing it at the time, and we enjoyed trying to top one another. There was a friendly but very competitive aspect of the game that grew on us even as Geometry Wars 2 came out. Both titles had pulsing music, crisp visuals and addicting gameplay so I was curious to see what the third iteration in the series was planning to bring to the table.

Living up to its namesake ‘Dimensions’ – the first change was very clear. At a glance, the whole moving around an object reminded me of the similar PlayStation 3 title, Super Stardust HD. However, Geometry Wars 3 shows off plenty of new wrinkles by introducing a wide variety of shapes. It sure looks pretty, but there is a good deal of additional strategy that comes into figuring out how a shot or enemy is going to wrap around a corner. 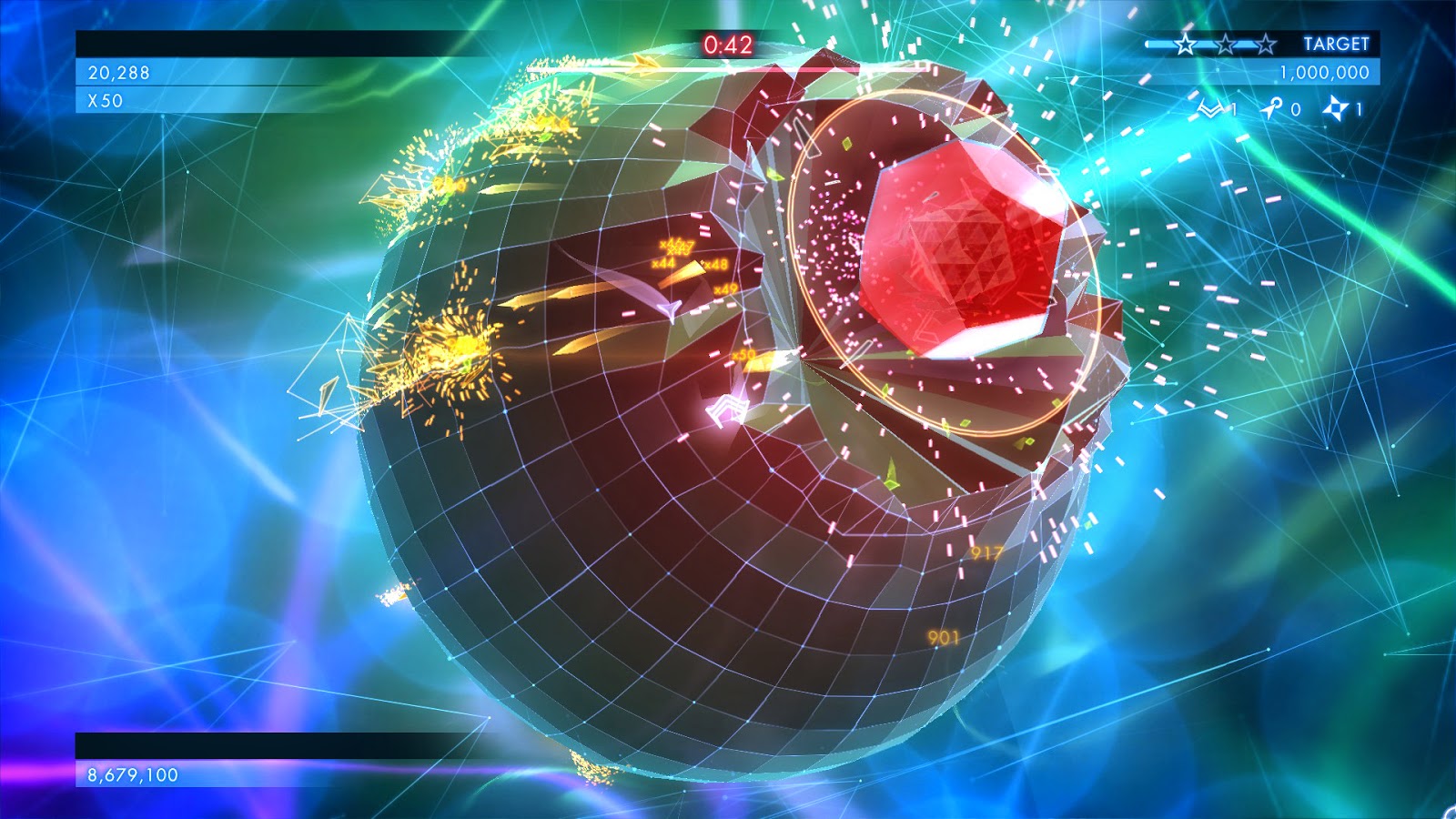 While the above differentiator is the most obvious, I am not so certain that it is the most important. The Adventure mode found in Geometry Wars 3: Dimensions offers a more compelling single player experience than in years past. Fifty levels with six boss battles still provides a leaderboard, but the differing objectives help to give the experience something more to do than simply blasting waves of enemies. Even more exciting for someone like me who really latches onto RPG elements and progression systems is he inclusion of ship upgrades.

These might include extra firing capability, defense drones or the ability to collect a certain kind of geom. Some levels are clearly built with certain loadouts in mind, but that forces a player out of his or her comfort zone and encourages them to try something a bit new from time to time. I consider that a good thing. The boss battles are where the frustration can be at. I love the idea – but the execution was sometimes a bit lacking. The core levels seem easier than prior games. I did not feel like the waves of enemies were quite as punishing as in the prior games, but that makes sense given the sense of progression the new Adventure mode tries to instill. However, boss battles sometimes feel a little cheap. The patterns are there to be figured out, and not all boss battles were created equal, but they were not my favorite part of the mode. 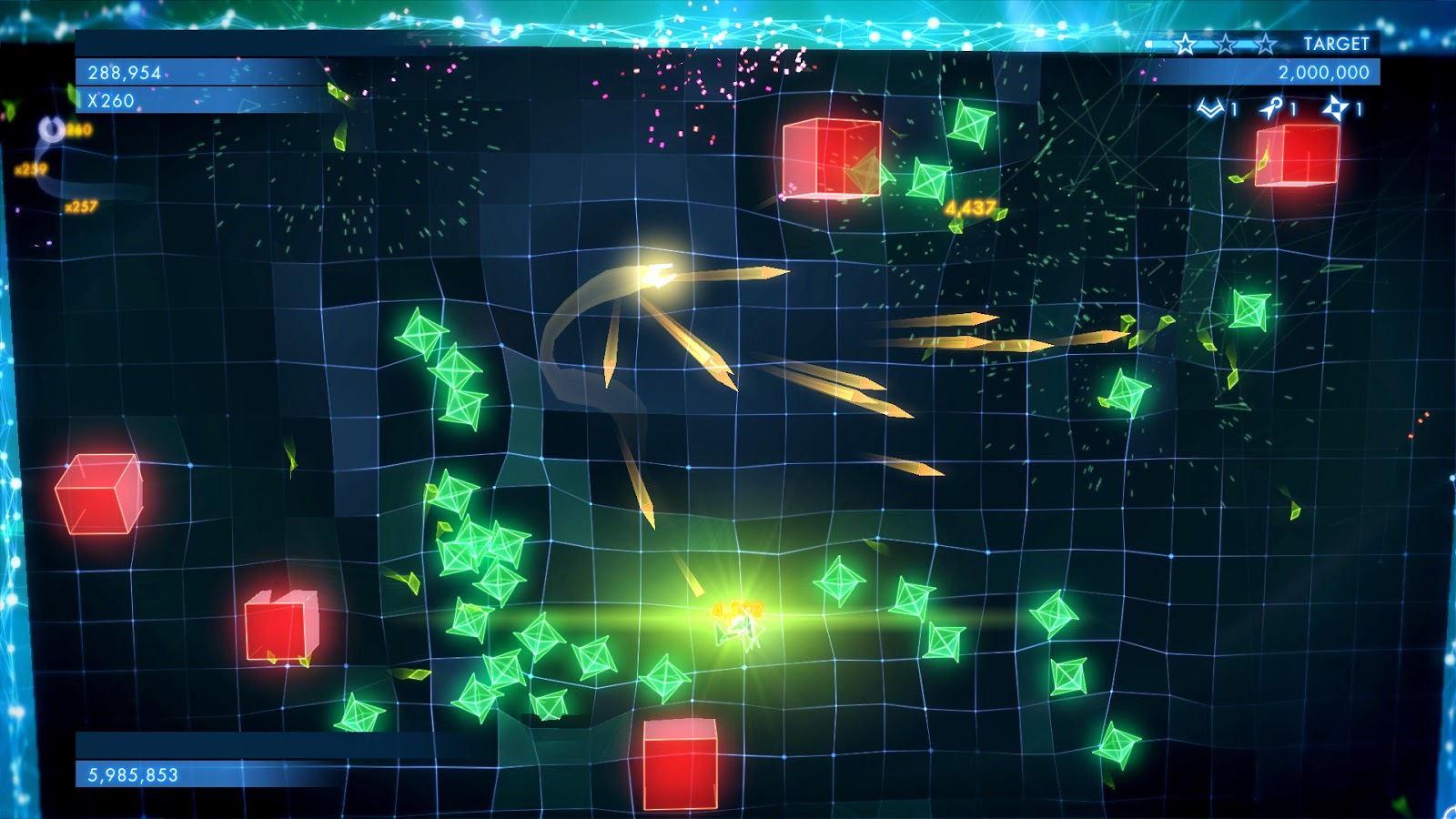 Trying to get three stars encourages players to go back to prior modes, as well as trumping any efforts a friend might have posted on the same board. I tend to be more of a single player game than one who invests heavily into multiplayer, so to that end Geometry Wars 3: Dimensions feels better suited to my personal interests. That being said, those who really liked the multiplayer aspects might be disappointed to find the options a bit less plentiful and in  my experience, matchmaking seldom performed well.

Geometry Wars 3: Dimensions manages to do something new for a series I had almost forgotten about over the last few years. The controls are precise and the action is both hectic and fluid at the same time. Adventure mode feels a bit meatier than the single player modes offered in the prior two iterations, though it still has a wart or two. Overall the experience is a blistering one worth looking into, especially for fans of the genre or  the two prior games in the series.