Project Nimbus is a game after my own heart; take giant mechas called “BattleFrames”, giant floating cities, the ability to target multiple bad guys at once, and then let slip the dogs of war. First, I am a massive mecha fan and I grew up on Robotech / Macross, Mobile Suit Gundam, Transformers, and any other giant robotic machines (man, I miss ExoSquad…). GameCrafter Team is an independent game studio based out of Thailand that is currently Project Nimbus and they have worked on previous titles like HyperSonic 4 and Smash Cat. While they are admittedly a young team, developing for the local market since 2008 and the global market since 2012, their dedication to providing a fast, action-packed, and most importantly fun, game is in full effect with Project Nimbus. 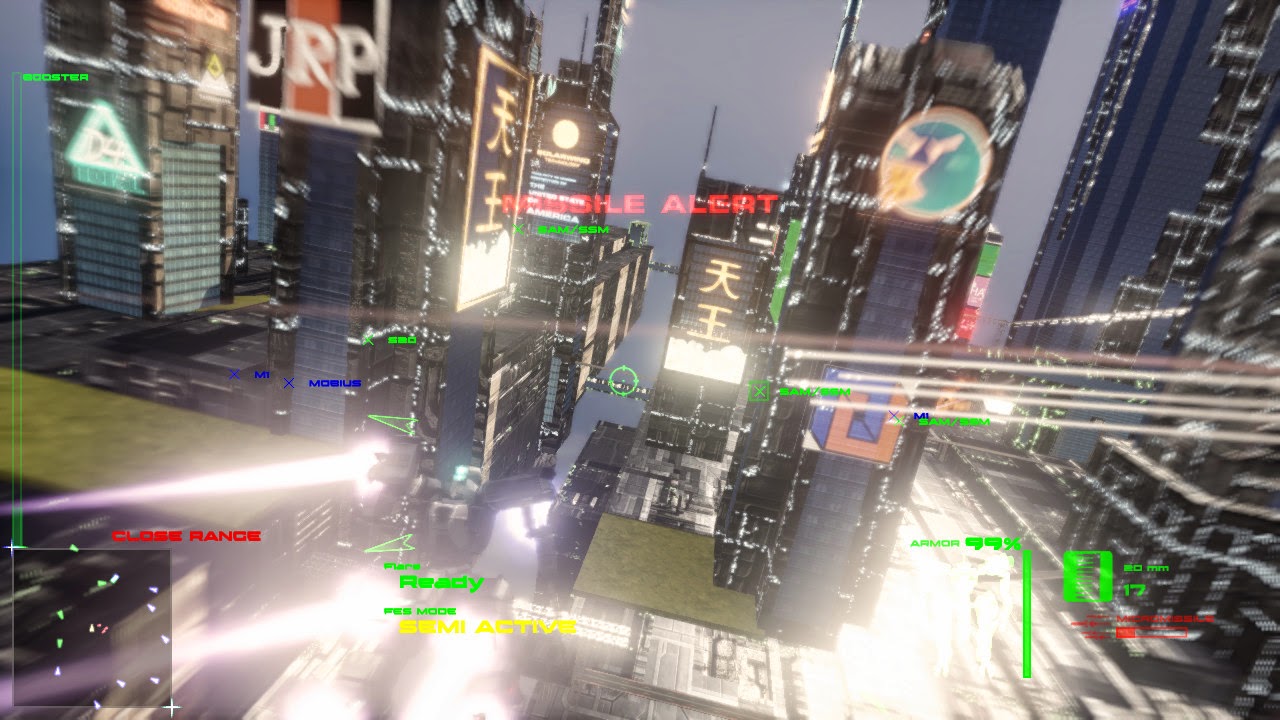 Project Nimbus is by no means an ugly game; the mechas are well modeled and articulate well, the skybox is attractive, and the different levels are very clean and often, quite interesting. Given the early access nature of the game though, some levels (the first few) do feel a little empty, taking place over a simple floating city that has little character, but as the game progresses you will experience some pretty frenetic action in massive floating neon cities reminiscent of Neo Tokyo in anime similar to Ghost in the Shell or Psycho Pass. Neon lights, billboards, traffic and other happenings of daily life go on below you as you wage ware in the skies above these floating megalopolis’.

While the floating cities are a part of the environment, you will have plenty of combat over more standard environments, as an example there is a particular level that appears to be near dusk high over a wooded mountain range, as if you were fighting over the Rockies in the west-central region of the United States. Plenty of missions happen above the clouds, which is an interesting take on things as clouds will be primarily below you as you streak through the clear skies, dodging rockets and destroying BattleFrames. It may be just me, but the contrast of the game seems to be a little off, like everything is washed out, like a dull, yet reflective aspect to all of the frames, buildings, and environments; sort of like turning both the contrast and the brightness up on your monitor. Outside of that, it is still a very sharp looking game with BattleFrames taking inspiration from games like Armored Core or the old GunGriffon Blaze game on the PlayStation 2 so classic mecha fans will rejoice in the utilitarian designs of the BattleFrames (I know I did).

The one thing that GameCrafter Team promised with Project Nimbus was fast-paced gameplay mixed with tight controls; they are certainly delivering. While I used the keyboard and mouse, which works quite well mind you, I did find that it would be nice to be able to plug in a gamepad or my Thrustmaster HOTAS Warthog, as both peripherals can offer more control in a more ergonomic fashion. I have yet to see if either will work and when I do, I will certainly update you on the subject. Whipping around at extreme speeds can be, at times, disorienting so locking on is absolutely key for up-close dogfights. 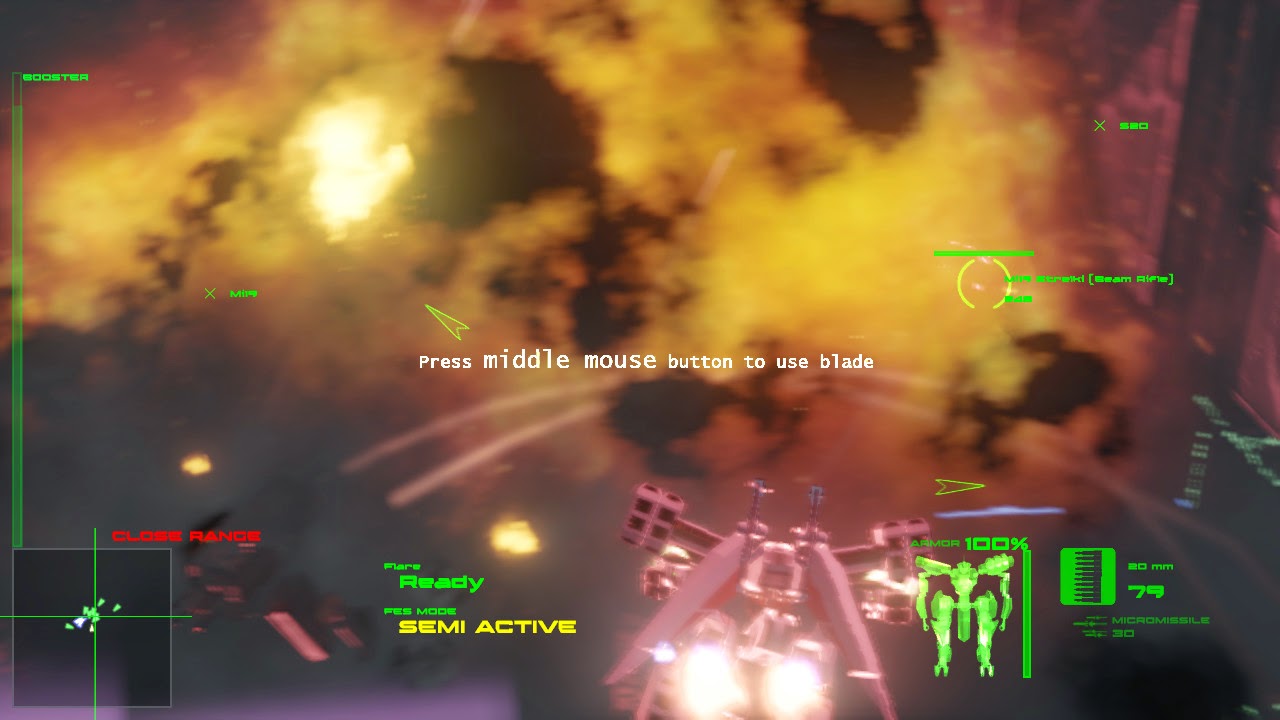 More than once I would be streaking through the air only to become completely discombobulated and unable to determine where I was in relation to the enemy but a quick button press locks on to the nearest bogey, thus allowing you to quickly reassert yourself, get your bearings, and get on with the destruction. One of my absolute favorite things in the world are Macross-style missiles. Now, for those of you not familiar with Macross-style missiles I will try to explain; you have a ship or mecha loaded with missile pods but rather than giant missiles like the Hellfire or Sidewinder missiles you will find hanging off of pylons on wings of modern-day jet fighters, they are compartments full of small yet deadly missiles. When you lock on to numerous targets at once, your mecha essentially opens up a can of proverbial hurt and missiles stream from your frame, it’s an awesome sight to behold (you can see a 27 second clip from Macross Frontier at: https://www.youtube.com/watch?v=nxnC6jkJyEM ).

Project Nimbus missiles work just like that which has me giddy and bouncing in my seat. More often than not I would fly away from the battle to get a wider view of things, switch to missiles then target as many enemy BattleFrames as possible and let loose a nasty-bad volley of death and destruction. It is a sweet feeling and one that gets me riled up every single time it happens. Now, these missiles are not unique to you as your enemies have them as well so in the night-time/evening missions the air will literally be nothing but streaks of missile volleys back and forth, the light from flares (which you will use, often) which will deter missiles, and the small explosive puffs of frames as they fall to their doom. It is awesome. 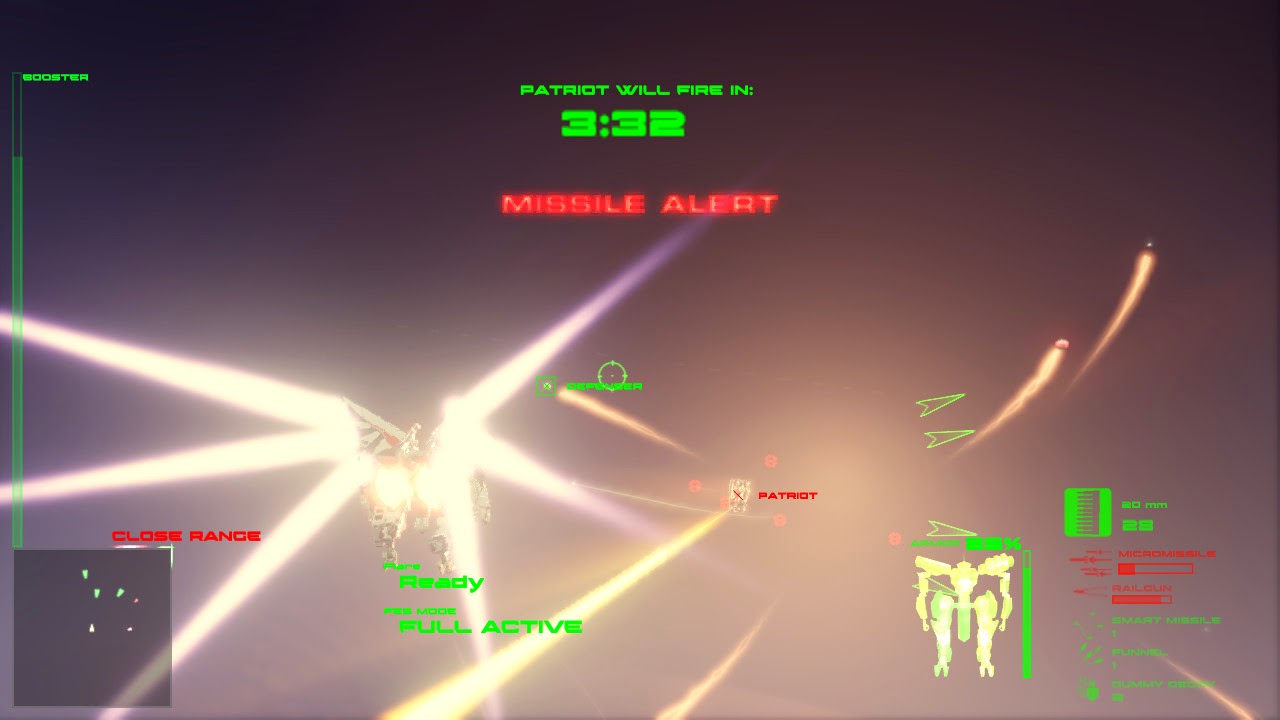 Audio is there, decent, and does the job, though, being a fan of some of the biggest anime franchises on the planet, I am spoiled by some stupendous audio. I would like to see a little more depth in the missiles, as they lock-on, fire, then explode. It is not that the audio is poor, not by any means, it is simply lacking in some of the explosions. The chaingun (standard machine gun) sound is quite nice, offering a deep, constant rumble, but I would like to hear  the rounds as they whiz passed me while I frantically dodge oncoming aggressors.

I think more focus should be put on digital surround sound, since Project Nimbus is one where you need to be fully aware of your surroundings at all times, as the directional stereo surround that the game currently boasts is just not enough to get really into the action. The music, though, is great as it sounds very similar to music found in the action-y sequences in anime like Full Metal Panic, Mobile Suit Gundam Wing, and any number of Macross titles. The title menu music actually sounds like it would fit right at home in any cyberpunk anime such as Ghost in the Shell, which frankly, is awesome. I hope they keep up the good work with the composer, because as it stands, the music is wonderful.

All in all I was not sure what to expect out of Project Nimbus; I mean, was it a stripped down version of Armored Core? Was it a rehash of old titles like Robotech: Battlecry or Robotech: Invasion with new mechas and the same old “go here, destroy this” mentality. Surprisingly it is a decent mix of both; combat is fast-paced and gritty in Neo Tokyo-style environments, similar to Armored Core, but the frenetic action and intense speed is more aligned with some of the action that I saw in Battlecry. While content still feels a little light, I am without a doubt, impressed and very looking forward to seeing more out of GameCrafter Team and Project Nimbus and you should head over to their steam page to check them out: http://store.steampowered.com/app/257030/ 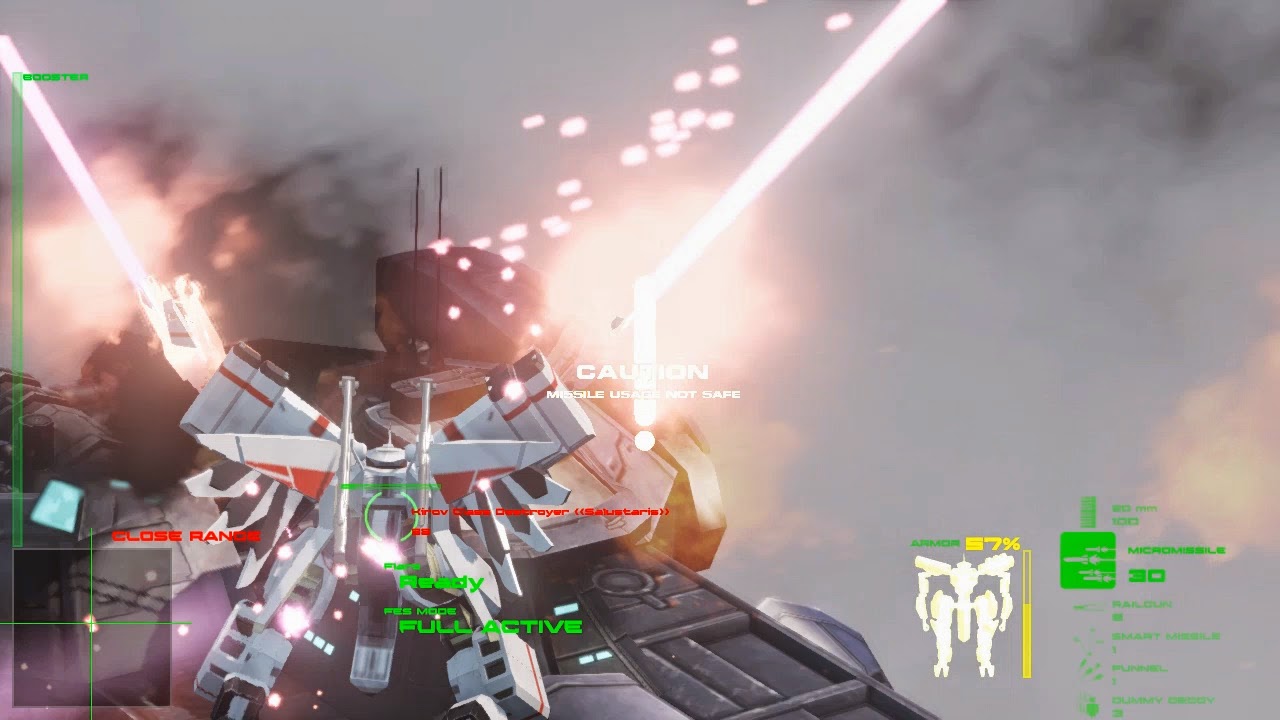