comments Share
You are reading
Age of Empires – Retro Reflections

In a discussion about the ancestors of real time strategy Age of Empires is among the first names that come to mind. This game helped establish an entire genre, both in terms of rules and popularity. Besides its relevance to ancient Greece, I loved it for its simplicity and challenge. 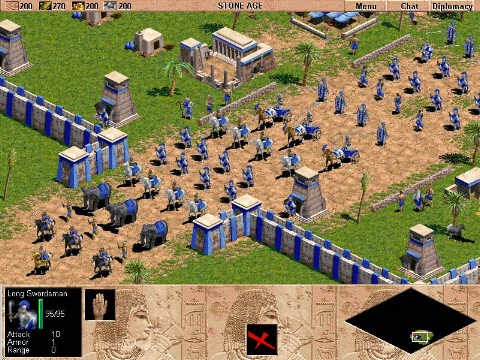 What you do is basically this: you build a town center and create villagers, who gather resources, such as wood and fruit. Then they erect buildings to prepare a defense force and improve your tools, weapons and other skills. After you have formed a big enough army you use it to crash your enemy! No matter how many times I did that I never got bored. There is something calming and satisfying seeing your villagers build a farm and cultivate the land to feed your population. Or listen to the sound of their axes cutting wood. You also notice the effects of human presence in the environment: after some time there may be no trees left, which is the price of progress.

Of course, your enemies don’t sit idle: they send soldiers to butcher your people and burn their houses. That’s why you must act quickly and prioritize your moves. The geography of a level, the resources you start with, the location, number and strength of your rivals are very important. No mission is played the same way as the others. The campaign starts at the prehistoric age, where you fight with clubs and live in huts. This a good opportunity to learn the basics of the game. Later missions take place in more advanced eras, where you have access to better technology: you forge metal weapons, build constructions of stone and pay gold to train elite units. However, even in the same mission you can advance to a new age if you gather enough materials and put up certain types of buildings.

Familiarizing yourself with the strengths and weaknesses of different units is a necessity: e.g. archers have ranged attacks but are vulnerable, catapults cause tremendous damage but are very slow, etc. The game allows for some experimentation too. I remember a very hard mission in the campaign mode, where I started in the middle of the screen and was attacked by two different enemies, by land and sea. Surprisingly, I found three ways to win. The first solution was to build a boat and put some villagers and two priests inside. I left my town and watched it burn, with tears in my eyes. I swore to get revenge. After a while, I approached my occupied land carefully and saw a horseman. I converted him with my priests and I sent him to kill the villagers he protected until then. The poor fellows went to the forest to cut some wood but found death instead. 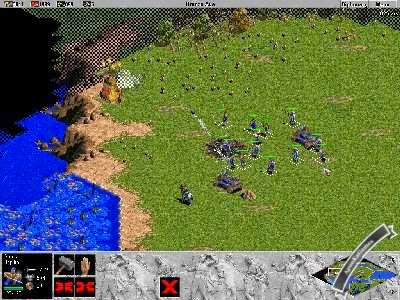 Another horseman was sent to replace the first one but he was no match for the zeal of my priests either. I repeated the same process patiently, stealing units, or, should I say, helping them realize they were fighting for the wrong cause. Gradually I acquired an entire army and my opponents exhausted their resources. You can imagine what happened next. The second solution involved making some war ships, then moving a few villagers to a distant area of the map, where they could gather wood to repair my fleet. You see, in Age of Empires, ships can hit land targets too, so they are very effective. The third way I beat this mission was to move my town slightly to the right, so as to avoid being attacked by my enemy’s fleet. As a result, I only had to contend with land units, which fell victim to my well prepared troops.

The graphics are simple and there are no visual effects but the animation of the units is nice. The architecture changes when you progress to a new age and there is a variety of buildings, e.g. warehouses, barracks, ports and watch towers. There are five main types of military units -infantry, cavalry, archers, ships, siege weapons- and their appearance reflects their technology level. Throughout the campaign mode (there are skirmish battles too) you control or face different civilizations, such as the Sumerians, Egyptians or Persians, which gives the game a historical vibe. However, the sprites should have more variety, e.g. the Japanese soldiers are designed like hoplites!

The sound consists of pleasant music, some good effects and incomprehensible voices. The in-game manual is excellent, explaining the rules and containing rich historical information. Though you don’t have many control options, I never felt something was missing. Hunting animals, selecting the location for a new farm or upgrading your archers by giving them flame arrows require as few commands as possible. The difficulty is well balanced and missions have varying victory conditions, e.g. you may need to transport an artifact, destroy two monuments in a limited amount of time or win with a predetermined amount of units.

Age of Empires is very old and there are many better real time strategy games out there. Still, it hasn’t lost its charm and I remember it fondly. After all, how many games give you the opportunity for world domination and historical knowledge at the same time? 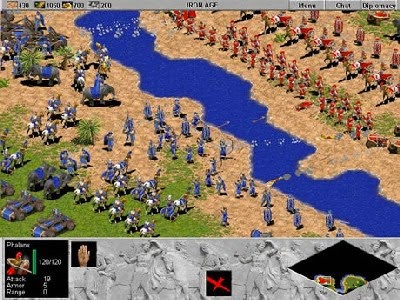