Blackguards 2 is the continuation of the original title, Blackguards – which we reviewed in January of 2014. As you can see it was a solid entry, earning a very respectable score. Developed by Daedalic Entertainment, who those of you that are regulars here you know that we are generally big fans of the titles that Daedalic releases. They are without a doubt, one of the better development studios that I have personally come across. Each title is something new, fresh, and well put-together. With Blackguards 2, Daedalic is looking to return you to the hex-based strategic combat in the dark, dank world of Aventuria. 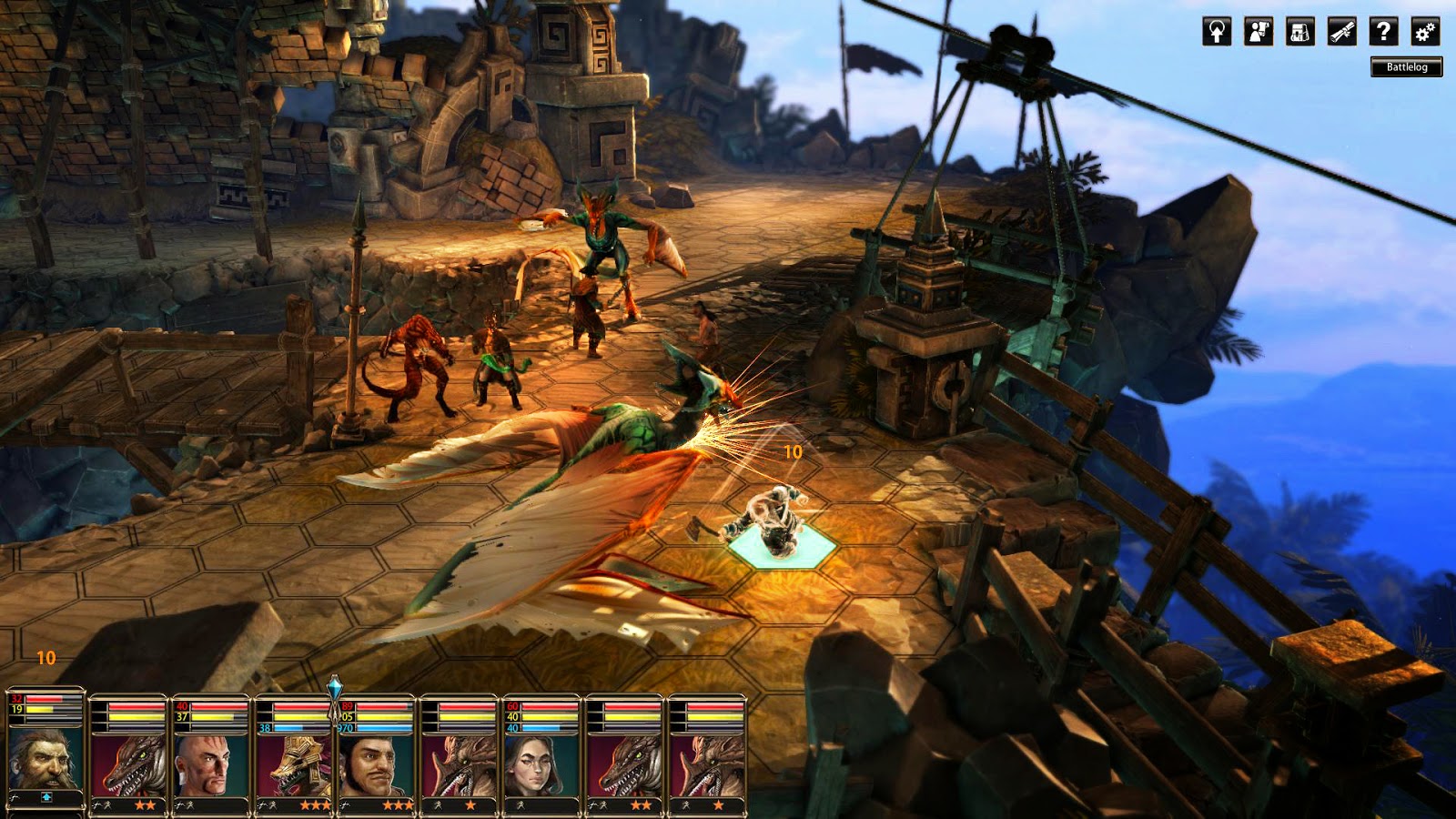 I love turn-based strategy games. I also love turn-based CRPG-style games. Blackguards 2 happens to go through and wonderfully combine the two together to make a very strategic turn-based CRPG title that is dark and oppressive. Mores-o than many other titles I have played recently, with Blackguards 2 I felt a massive wave of nostalgia, like I was playing an old Icewindale or Baldur’s Gate title that had been updated and altered slightly. This is a good thing. The gameplay is both simple and complex, rather than being a free-running action RPG as they tend to be more popular, here the game sticks to more traditional roots. When you load into the level you are awarded the opportunity to place your characters within a designated area (or two) and then you navigate through the level using a hex-based grid.

Each character has essentially two turns; a movement turn then an action turn, though you can spend the action turn moving. If you, instead, decide to attack, use an item, or perform a magic spell, that action turn will take both of your turns. Similar to how classic Dungeons & Dragons rules with initiative work, each character on screen, whether good or bad, has a speed (aka initiative) that determines their place in battle. A handy little display in the lower left corner of the screen shows you the turn order which will helps with plotting out your various strategies when faced with combat. In addition to D&D-like initiative rolls you have varying types of damage that weapons will perform, from the piercing damage of a spear or arrow, the slashing damage of a sword or axe, to the crushing damage of hammers or magical damage from, well, magic. Some enemies, like skeletons, will have immunities and weaknesses to the various types of weapons; in the case of the skeleton, they are immune to piercing damage but take extra damage from blunt/crushing weapons. Being a CRPG gamer I was thrilled with this discovery, since too few games these days take this into effect. 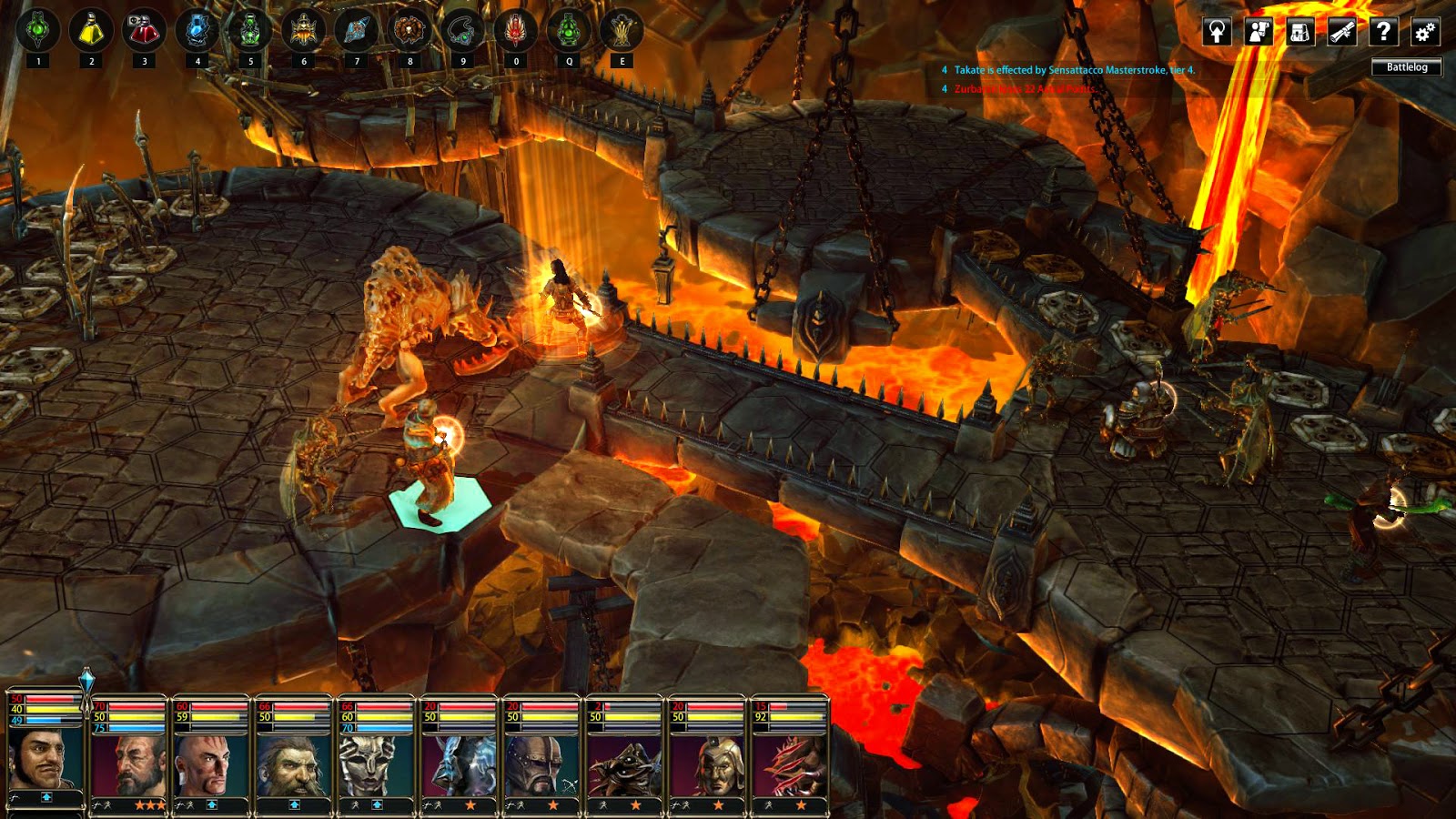 While movement and weapon types can be both complex and simple (complex because of the many options at your disposal, simple because Daedalic’s use of the UI and helpful text is amazing), it does not stop there. Leveling up is an absolute joy; there are about a gotrillion and four options for leveling up your character which again is a throwback to classic RPG titles. This makes leveling up a very important task, one that can be the difference between victory or defeat. In my first run I was a bit over-zealous in my point distribution and ended up with a character that while good at many things, never excelled at anything and ended up taking a back seat to some of the supporting cast in terms of power. All my fault, naturally so on my second run I spent far more time mapping out my skills and was far more careful with how I spent my ability points. The results were instantaneously more impressive; instead of a jack-of-all-trades I now had a wicked-cool battlemage that wore light armor, carried a spear, and could fling spells about like the best of them. The options are endless and that is a wonderful thing. Having a more focused build can result in some excellent battles where luck and skill loadout are all that sees you to victory, and as a more specialized character I found myself in far fewer protracted battles where I spent more time healing than fighting.

Graphically Blackguards 2 is very similar to the original, though models and armor, to me seems a little nicer and the shading/lighting is far superior to that of the original (even though it is still nowhere near where it could be). Model designs are simple, decently animated, and work well enough, though I would place them on part in terms of quality with titles like the recent Shadowrun reboot. Not terrible, not by any means, and more than passable, but nothing to write home about. The spell effects could use a little work, though, as more than a few of them are fairly lackluster, while others are quite nice. 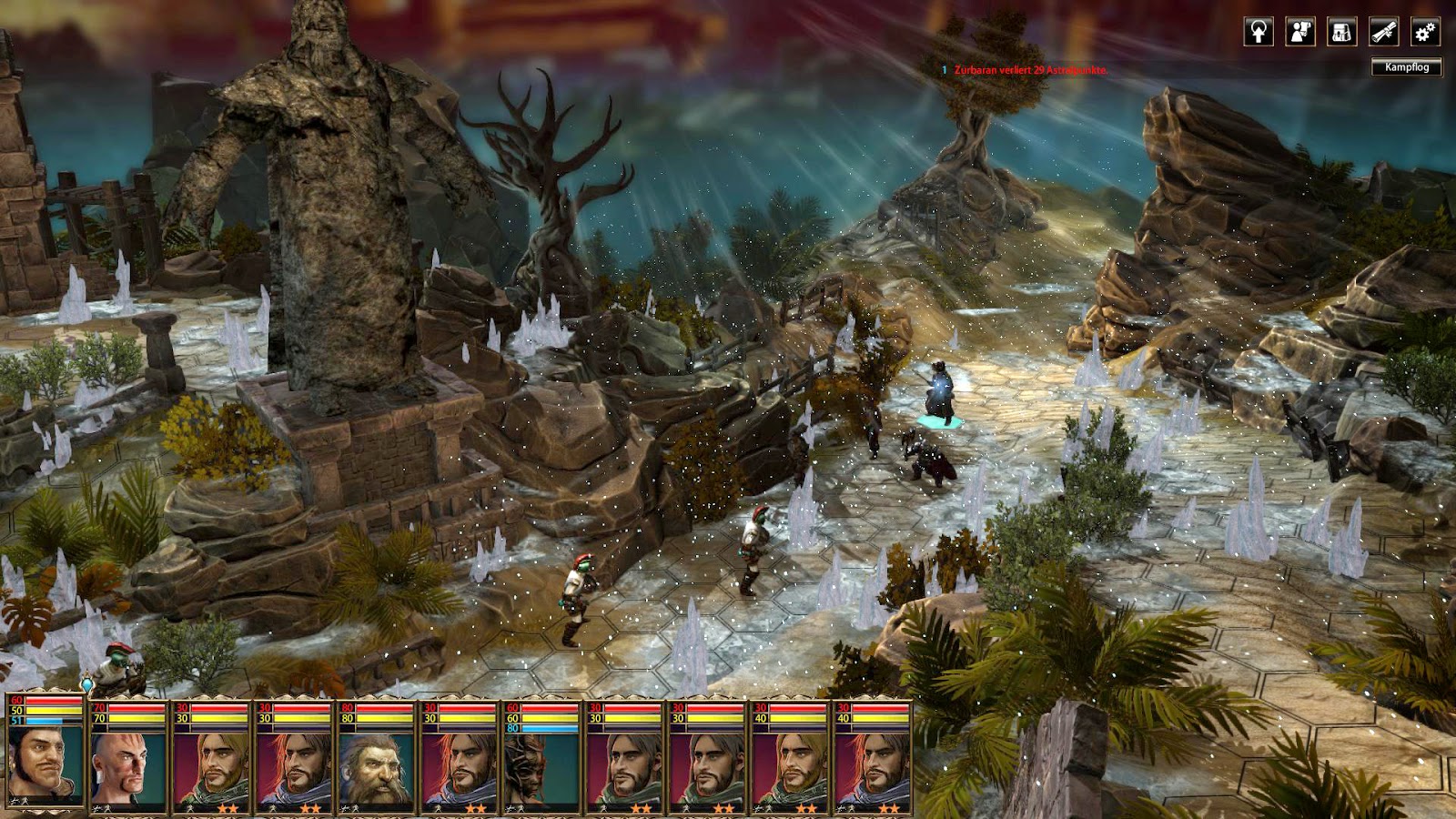 Magic should be a sweet  looking effect as you tear the energies of the world apart; not a little *puff* as you attempt to shoot a lightning bolt out of your hands. It is a strange effect, though it does get the job done. Where I was most impressed was with the actual level design and appearance; the levels are stunning, moody, interesting and very well done. Various items, like barrels, boxes, levers, chests and impromptu bridges (like spiderwebs!) litter the levels and are fully interactive. Some real thought was placed into the design and development of the different maps and helps take an already excellent combat system and flesh it out even more. The dark tones, oppressive nature of the various levels, and the heavy storyline all put together a suitable nasty (in a good way) world that feels like a living, breathing cesspool. It is excellent.

Along with the excellent gameplay mechanics and impressive graphics, the audio is also, for the most part, top notch. Voice acting is absolutely excellent; while I am very familiar with Daedalic’s voice-acted titles and the excellence that their actors bring, I was completely taken by surprise by how good the actors in Blackguards 2 are. Those of you that read my reviews may know by now that I am a massive fan of the seiyu found in most Japanese titles (like the Tales games, their Japanese actors are superb), but I would go as far as saying that Blackguards 2 is on par with some of the titles I have recently played that have come out of the East. They are, without a doubt, some of the better voice actors in games.

With the excellent voice actors comes excellent sound effects; dungeons have positively creepy sound effects, the thwack of a hammer or axe is distinctly different than the sound of a spear or magic effect. Attention to detail is not lacking, as even the sound of the various weapons on different types of enemies are different. Hitting a skeleton sounds different than hitting a human, which is a nice little touch. I will admit, though, that the soundtrack is largely forgettable; while not obtrusive or distracting, which is good, the music is just there and I struggle to remember what it was even like. This could be in part due to the fact that the ambient audio in the environments, added to the superb voice acting, simply drowns out the music; completely possible and highly likely now that I think about it. 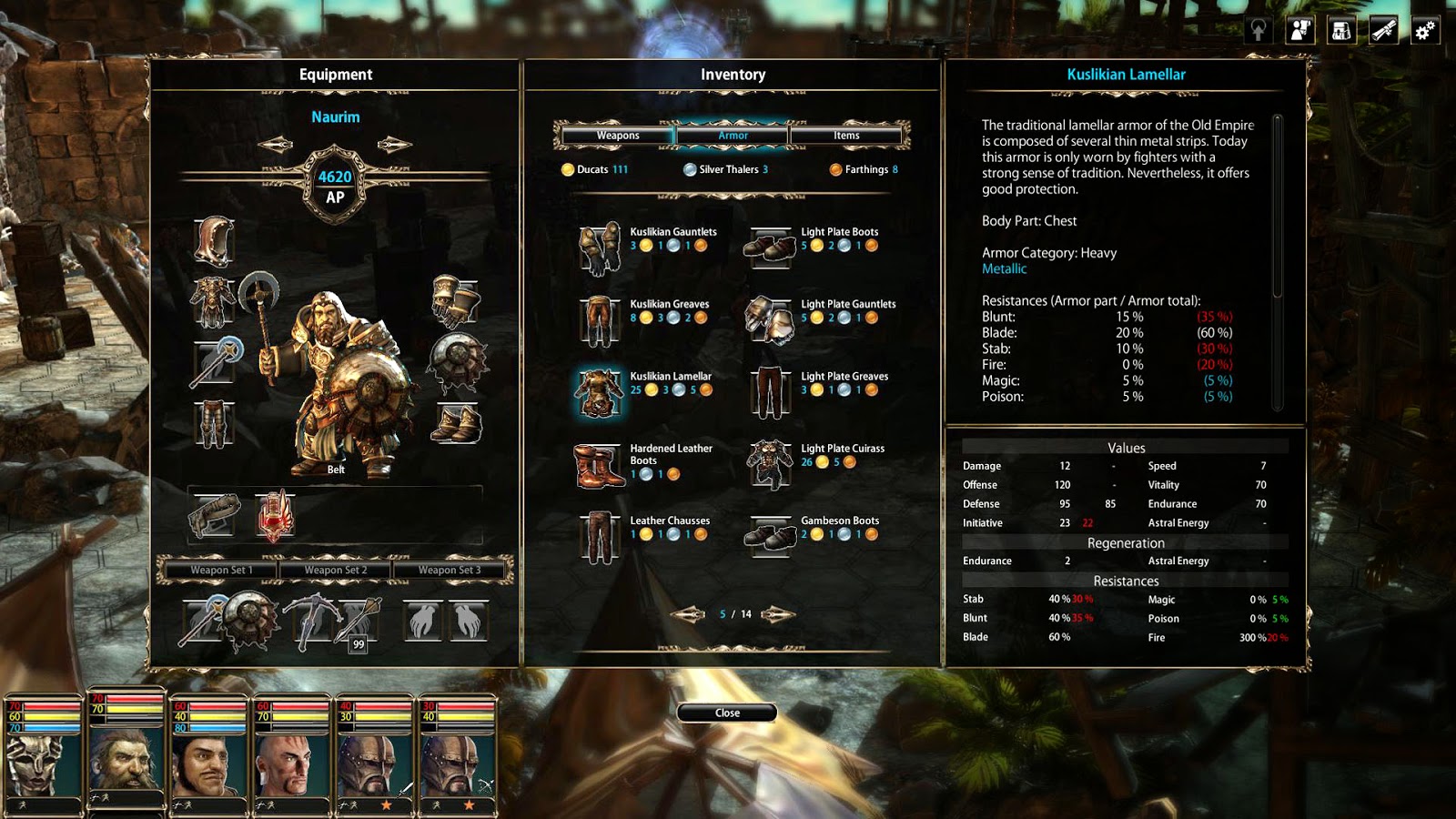 All in all there is very little that I would change in Blackguards 2, with the exception of the camera controls; it would have been nice to rotate the camera left/right rather than being able to just zoom in/zoom out. That was more of a nitpick from an overly tactical player though, as I like to see everything that I can from all angles in any of the strategy titles that I play. I minor nitpick, but a nitpick all the same. Outside of that and maybe a few minor annoyances (unskippable screens between levels … blaspheme!), Blackguards 2 not only provides a fresh, new feel to an existing world, but it also refines some of the gameplay mechanics from the original.

Solid graphics, amazing voice acting, splendid ambient audio, and a solid, if dark story line with support cast members that are at times both flat and full of character, really show that Daedalic is continuing to grow the franchise and refine the existing formula. Those gamers, like me, that are eagerly awaiting the release of additional classic CRPG-style games are in for a treat with Blackguards 2 so head on over to Steam and pick it up. It is certainly worth it.