comments Share
You are reading
Fist of Jesus – PC Review

Once Upon a Time in Jerusalem, there was made a short film titled ‘Fist of Jesus’.  Like most short films seem to be, or at least the ones I end up seeing, this one was entirely out of left field.  The Jesus that children grow up these days learning about is replaced with a zombie-slaying amalgamation of Lamb of God and Chuck Norris, and judging by all of the awards the movie has won, it seems to be a hit!  Not precisely my cup of tea, but then again, zombies are usually a miss for me on a good day!  You would think that this would spell doom for the game by the same name, but instead, they took “double-dragon”-esque gameplay and littered it full of sacrilegious humor. 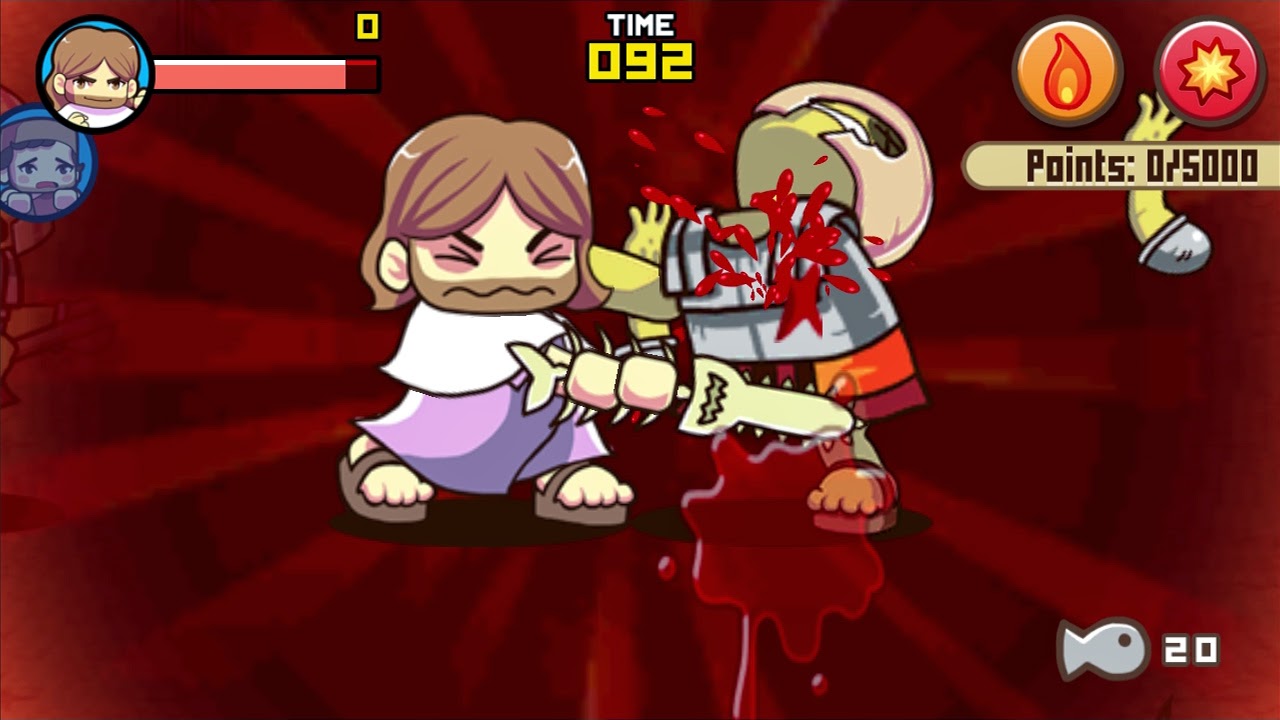 Your divine duo, Jesus and Judas, each have a set of skills that are themed to the character, but also themed to hilarious blasphemy. The Star of Nazareth skill calls shooting stars down upon zombie hordes, decimating anything in their path where one of these pointy missiles ends up landing, whereas Jesus can make bread and fish appear on the screen to be used to heal wounds up.

Each level you can earn up to three stars, based on your performance as you dismantle Lazarus’ undead horde, and with a map that lets one choose which level to play. I felt encouraged to backtrack and perfect former levels, yielding enough stars to access bonus levels along my journey. As you progress through the levels, the game continues to introduce new enemies with new gimmicks to fighting them, and former mini-bosses begin to appear as regular enemies at the worst possible time. Whether you can only attack them from one side, or they can hit you at range, or simply have the raw power to clobber half of your health in a single blow. I often found myself relieved when I finally did run out of things to dole out divine judgement to. 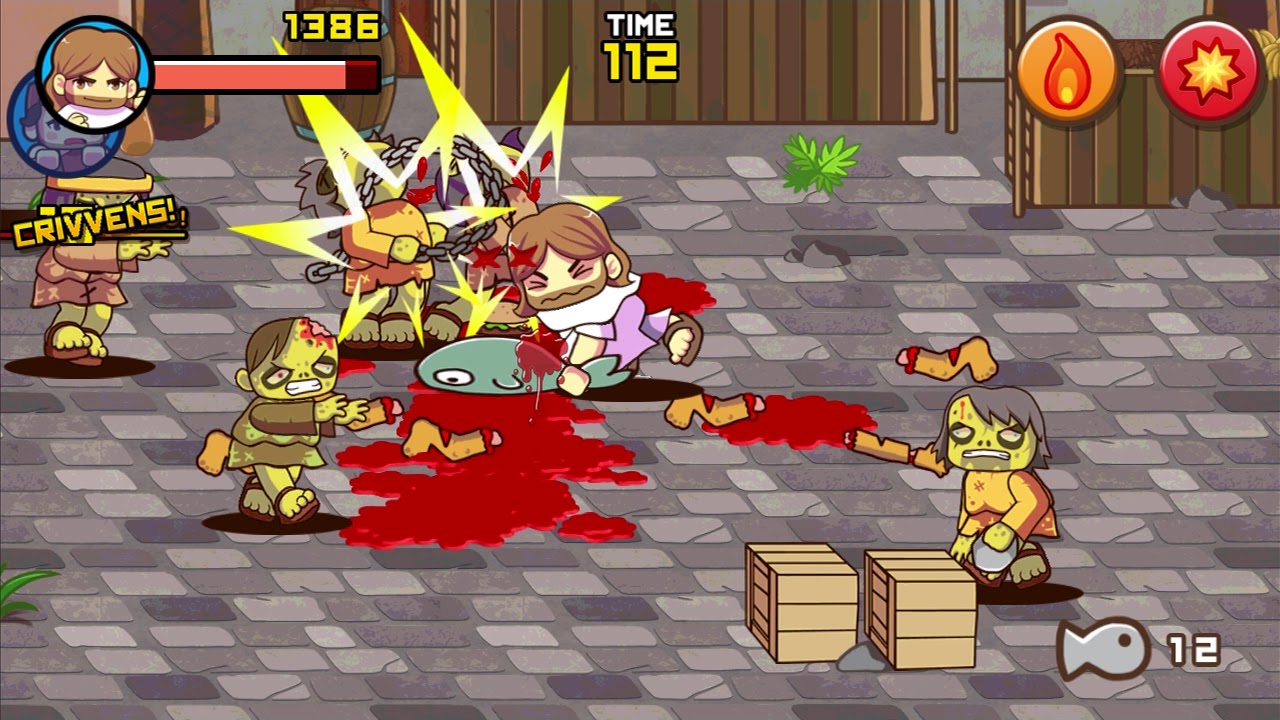 The aural experience is pleasant, although the music is easily drowned out by the impact sounds, the breaking pots and the announcer shouting out the ‘divine punishments’ that you will learn to enact. The rare time you do get to hear the music playing in the background, it seems pleasant and cheery, chipper, upbeat and entirely strange in a zombie beat ‘em up. However, ‘strange’ is something that this title embraces, so it is not out of place. In fact this almost makes the seemingly out of place music the perfect compliment to First of Jesus.

The downside to the title is that it feels like a flash game of sorts. The walking animation fails to synched up well with the actual movement, and the hit detection is punishing to say the least. With regular enemies, it’s not really noticeable, but come your first mini-boss, you learn fairly quickly to move down the screen, not up it, to evade an overhand swing. You learn or you die, at least. Even if you are far from the depth of the enemy, if the attack animation comes near your character, you take the hit. It makes for a frustrating experience until you adapt to it, but overall that is hardly a deal-breaker. 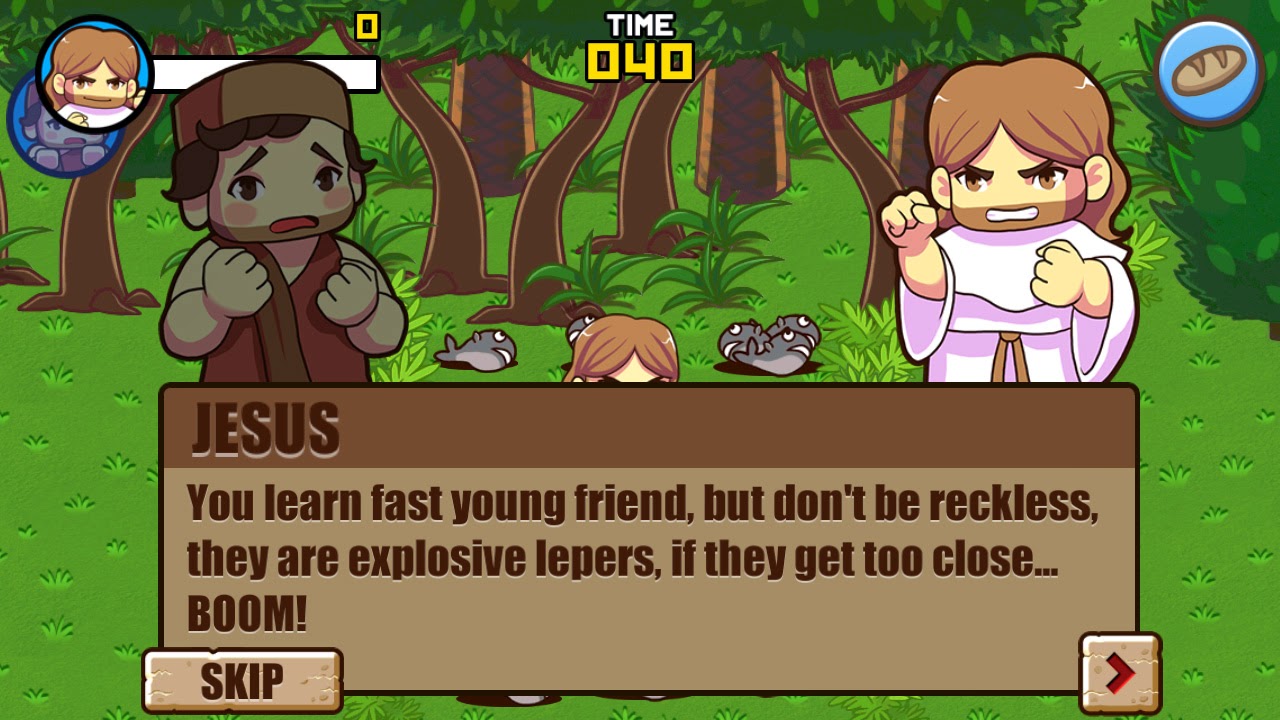 The money gained from defeating enemies is usable between levels to upgrade all manner of things, from upgrading special attacks to giving yourself more health, doing more damage, or even purchasing rare items called reliquaries. These can be found throughout levels, but to complete a set of three will unlock a bonus for the character that just might be worth it. With enough zombies slain comes a level-up, which allows you to pick an upgrade for your character, allowing the game to further cement itself in my mind as a positive gaming experience.

If you have mild OCD tendencies, a love of unlocking things and character growth and improvement, Fist of Jesus: The Bloody Gospel of Judas will not leave you disappointed. Going through the game (which is sixty levels long) is not all there is to Fist of Jesus – because going back through prior levels to perfect scores ups the replay value considerably. Unless you just don’t like beat ‘em ups, or have no sense of humor, I recommend that you try this game without delay.