Being that it is early 2015 and most of the blockbusters were out a couple of months ago or still a month away, this is the perfect time to try and get some time in with indie titles. One such title is Heroes of Steel RPG by Trese Brothers. While dubbed an RPG, this is really more of a tactics title with RPG elements. I have long been a fan of the turn-based tactical genre and while Heroes of Steel RPG might lack the production values of a Fire Emblem title, it still serves up a solid combat engine that kept me coming back for more. 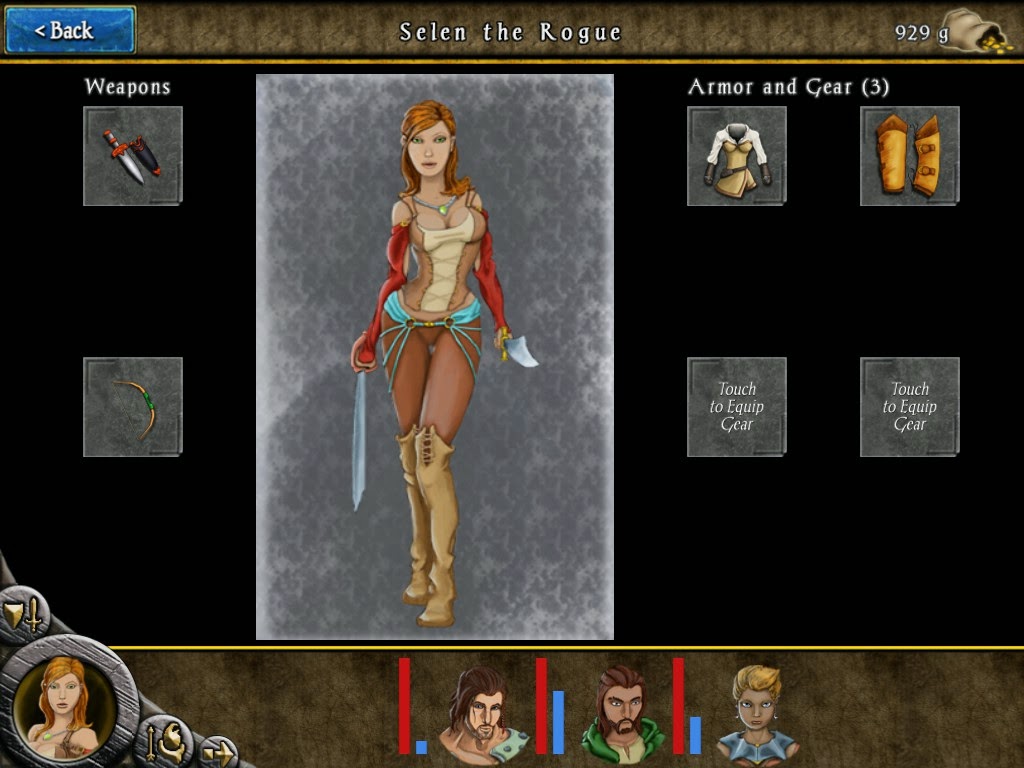 Things start with you creating your team by picking out a character for each ‘slot’. Your four basic food groups are represented in these classes with a warrior, healer, rogue and magic-user. Each slot has two characters you can choose from, but this format ensure that you have a well-balanced party. This is needed because the game starts you right off with your team being imprisoned for reasons unknown to them.

While none of your four characters knows one another going into this, a need to escape their cells forces them to band together. The story is pretty simple stuff to start, but actually gets a good deal better as your team starts to dive into not only why they were arrested, but other world events taking place around them. The rogue is able to pick the locks and help the team escape their cells easily enough, and before long the party is able to find their basic adventuring gear as they try to escape.

This is a title that feels like it was built with mobile in mind. Some RPGs feel like they would work better with controller support, but here the point and click interface is king due to how the whole game was buttoned together. Movement consists of double clicking on tiles. Clicking on a portrait in the lower left corner helps you to cycle through the team and choose a particular character to look at. RPG standards such as stats, equipment, experience and money all come into play here. Skills are mostly geared towards combat, but the rogue and healer have some handy ones for outside of battle as well. These are chosen from the ride side of the screen from an expanding/collapsing menu bar. Some of the commands have keyboard shortcuts to help speed things along, but most of the interface is mouse-heavy. 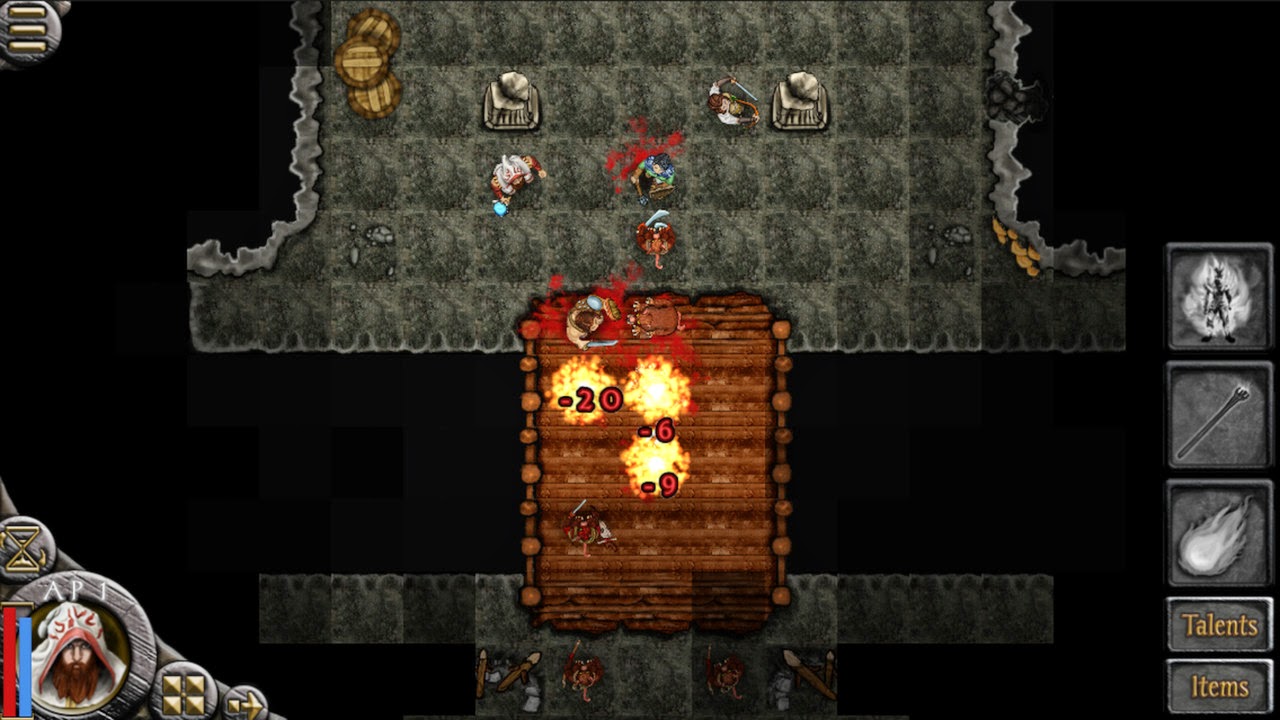 Exploration is a little strange at times, because you can have your group walking together as a single unit or they can be spread out and controlled individually. By and large the single group works better, and most of the time I found myself leading with my rogue because of her ability to ‘sense’ trouble ahead, detect traps or perhaps get the drop on an opponent. Combat is very difficult to avoid but getting the first strike often provides some nice bonuses to kick things off.

I mention that combat can be difficult to avoid, but unless your team is really hurting, there is very little reason to want to avoid it. Heroes of Steel RPG is at its best during the turn-based combat. As soon as it begins, your party fans out into individual  units and you have action points that help you dictate who moves in what order and where to. These action points are also used in attacking. There is a mana bar for special moves/spells that generally ramp up the damage.

Because the party is balanced with traditional classes, combat plays out largely like you would expect it to. You throw the warrior into the fray in an effort to soak up damage as the team meat shield while dealing out powerful melee attacks. The rogue is a bit squishier but also more difficult to hit. She has a blend of skills from ranged archery to stabbing attacks. The spellcaster should be kept at range and using magical spells while the healer is solid enough in melee without matching the warrior’s skill – but she also possesses the ability to mend wounds. 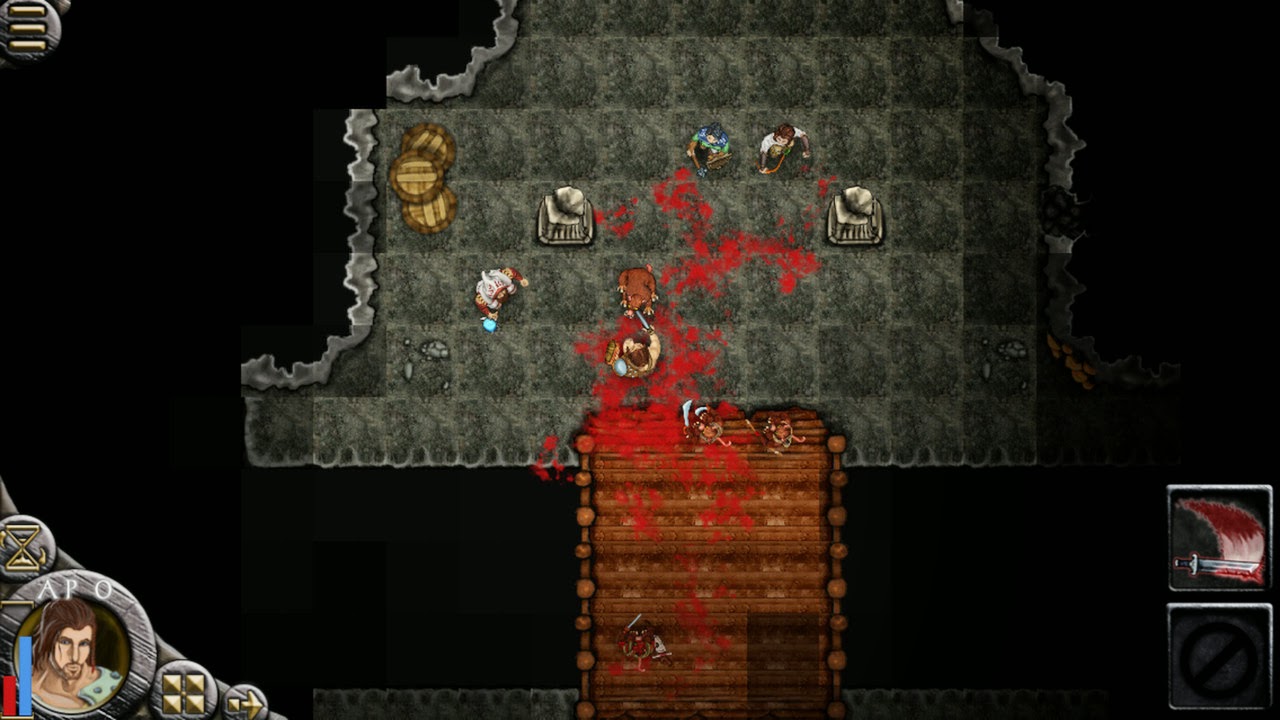 While there are few surprises on that front, it all plays out quite nicely on the tile-based board. Enemies are not often hard to kill, but they can sometimes come in waves when you least expect them to. There were times early on I saw two by themselves and would just send my healer or rogue off to deal with them, only to discover that there were more enemies just out of sight (there is a fog of war mechanic at play where you cannot always see very far into  your environment if you have not yet explored it).

With no command to escape battle, it seems like death would be a real problem here, but in fact Heroes of Steel RPG wants to pose a challenge without completely preventing players from advancing the storyline. If a character dies, you can roll back a turn and try again. There is always the option to restart a fight from the beginning as well. Heroes of Steel RPG is constantly saving. There is no manual save option, but any time you quit the game – well it is saving. As someone who likes to store rollback saves in my RPGs, I was a little concerned by this early on, but because the deaths are so forgiving and the narrative is not built around ‘choices’ like a Mass Effect game, there is not much reason to go back to prior saves.

The production values are not bad. This is clearly an indie title with a mobile origin. The end result is pleasant enough but simple music in the background. It does little to advance the game, but it never gets in the way either. The tile based layout of levels is very functional if not terribly pretty. The character designs are simple illustrations that look okay – certainly better than I can do – but I have seen far better as well.

The bulk of what Heroes of Steel RPG has to offer is found in its tactical combat. The story is solid and the interface is easy to navigate if not optimized for PC. The presentation values are adequate but they will not blow anyone away as technical feats either. Progression is simple Dungeons & Dragons style RPG fare. It is enough for me, but those looking for something with a faster pace or deeper progression systems might not find themselves as entertained. Heroes of Steel RPG is best described as solid, but has room to improve as well.