The popular board game Mage Wars by Arcane Wonders is slated for an update to their core set. In the coming months, fans will be able to partake of new board and spellbook designs and more. 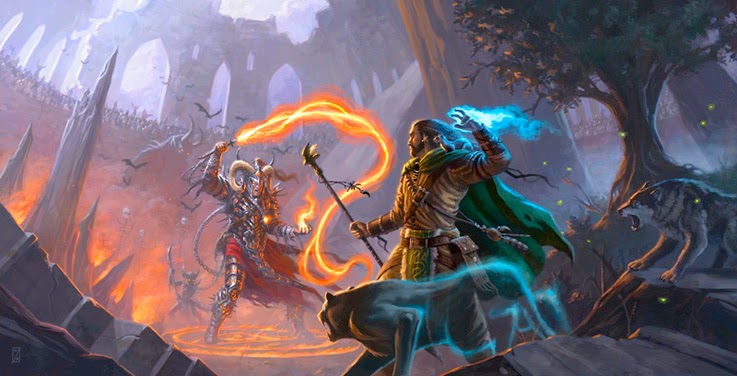 Here is some of the information, and you can view the update from their website here.

Today, we are happy to announce a dynamic change to our Core Set for the award winning Mage Wars® game!  Beginning in early 2015, we will be shipping the 4th edition printing of Mage Wars, and with it, comes several dynamic updates that are sure to excite!


First, as you can see, there is a new box!  We will be moving to a 12 x 12 box size, which will make many shelves, both in retailers and in homes, happy!  But aside from just a new box design, we have many exciting new features:
◾2 New Spellbook designs
◾New Arena Board design
◾Alternate Art for Bear Strength, Dispel, Dissolve, Minor Heal and Rhino Hide
◾New Artwork for Battle Fury, Force Push, Hand of Bim Shalla, Teleport, and Temple of Light
◾Plus, 14 additional spell cards have been added to make spellbook building easier, including Dispel, Dissolve, Force Push and others. Most notable though is the “banner” that the top center of the box now adorns, reading, “Mage Wars Arena”!  As many of you know, we are hard at work on Mage Wars Academy.  Mage Wars Academy will be a huge leap forward for our game, offering a new starting point for players to enter our game’s world, as well as more cards and strategies for collectors and existing players to enjoy.  Mage Wars Academy will be a 2 player starter set that comes with 2 Mages, 2 Spellbooks and a new gameplay design that is completely “board-less” offering players more portability and faster gameplay (Games average 20-30 minutes) all for roughly half the price of the current Core Set!


One of the biggest design attributes of Academy is that all Academy cards will be “forward-compatible” with the main game of Mage Wars.  This new term seen on the Core Set here, “Arena”, is what we will be using going forward to differentiate between the pending new Academy Play and the traditional Mage Wars Play everyone is accustom to; embodying the foundation of Mage Wars, dueling wizards fighting inside the Arenas of Etheria!


2015 is going to be an exciting year for Mage Wars!  Battlegrounds is coming, which will bring a new playstyle with it, Domination.  After Battlegrounds, Mage Wars Academy will make it’s debut and followed after, the Paladin and the Siren will make their debut in the Arena in the Paladin vs. Siren expansion!  Whether you are an experienced Mage or a new player to Etheria, there has never been a better time to Enter the Arena!