comments Share
You are reading
This War of Mine – PC Review

Tags11 Bit Studios, PC Review, This War of Mine

I generally like post-apocalyptic stories and zombie stories, both of which can have a lot in common. They generally both involve a group of people trying to survive once society has broken down and there is some external threat that they need to fight against.  Sometimes, the focus is on overcoming those threats, and other times, those threats are just the backdrop for a different story that the creator wants to tell. 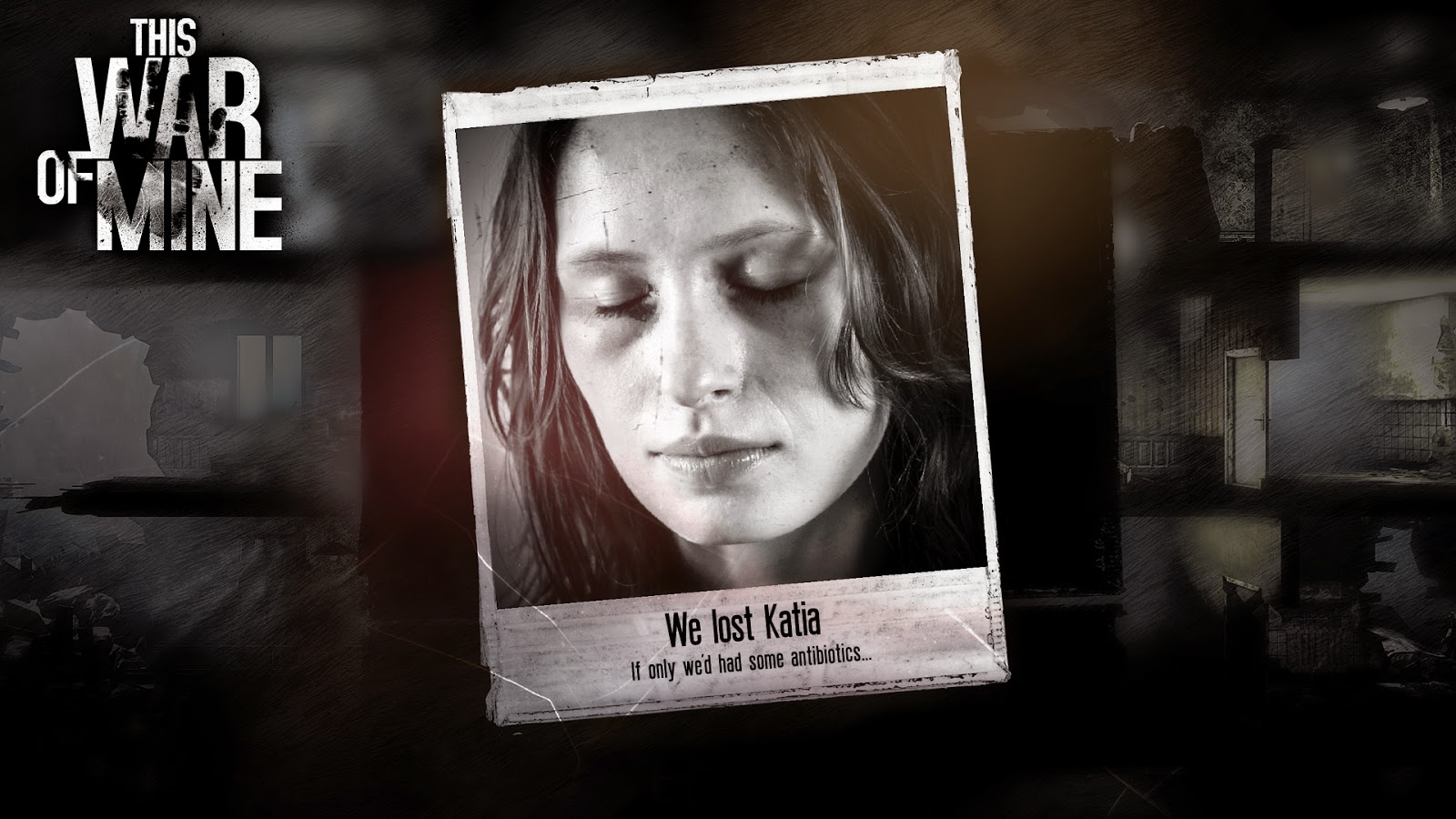 This War of Mine definitely falls into the second category.  Ostensibly, there is a war going on outside the confines of your shelter and your immediate surroundings.  Really, though, it doesn’t matter much except to explain why you are living in this place and worrying about fuel to keep the stove cooking.  You could just as easily slap the zombie theme or some other post-apocalyptic scenario over the top of the game and it would feel just the same.

At its heart, the game is a resource management game.  In order to survive after society has crumbled, you need to worry about food, medicine, creature comforts (sadly a last resort usually), and weapons to help you protect it.  The game alternates between day and night cycles.  During the day, you try to upgrade your home, feed your survivors, make sure that they are well-rested, and well-equipped to survive another day.  During the night, you’ll take one scavenger out to try and acquire new resources by searching nearby stores, homes, etc.  While you are away, though, bandits may try to scavenge your place.  Nothing is more demoralizing that returning home with a handful of lumber and spare parts to find that your food and medicine have been raided.

As your resources dwindle, it really makes you start to think about your party.  Who is the most important person to keep healthy?  If you only have enough food for one person, do you give it to the person who is going to be running around at night?  Do you give it to one of your stronger types that will be trying to protect the house while you are out?  What about some of your oldest friends, the ones that helped you get started from the beginning?  Does that even matter? 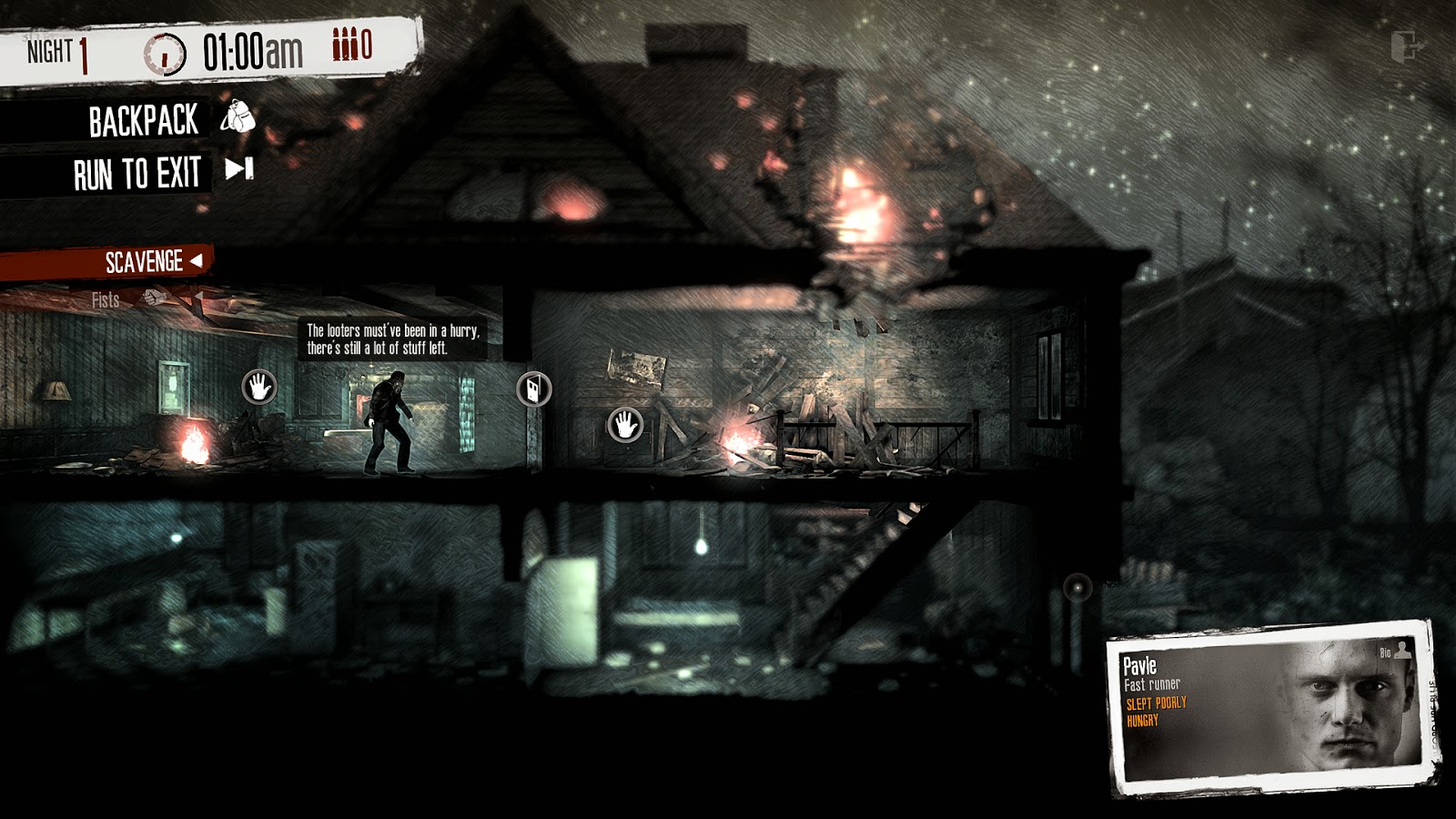 There are other choices you must make that really make you think.  Do you give up some of your medicine to help the kids that drop by trying to find help for their sick mother?  Do you rob the elderly couple’s house while they sit there unable to stop you?

The decision that I remember is the one that the game wouldn’t let me forget.  While scavenging one night, I overheard a strong soldier-type talking with a young woman.  He wanted to share his food and security in exchange for “favors”.  When she refused, he dragged her off to a shed to force the issue.  I was given plenty of opportunities to interrupt the conversation along the way.  But I didn’t.  I looked at this big, tough-sounding soldier with his automatic rifle and then I looked at my scrawny scavenger armed with a trusty knife.

Most other games, I’d feel perfectly justified running into be the hero.  In this game, though, I knew that doing that was a good way to get killed and lose my best scavenger.  I quietly let them go on their way while I raided the home behind them.

At the time, I felt bad about it, but survival is the most important thing.  The game wouldn’t let me forget though.  The other people in the home continued to talk about it and wondered if the girl was okay.  When I returned to the scene later, another scavenger mentioned knowing the girl.  My action (or lack of action) really seemed to have an impact on the morale of my team.  I still wonder what would have happened if I’d tried to save her.  Could I have at least distracted the guy so she could run away?  Would it have been worth it? 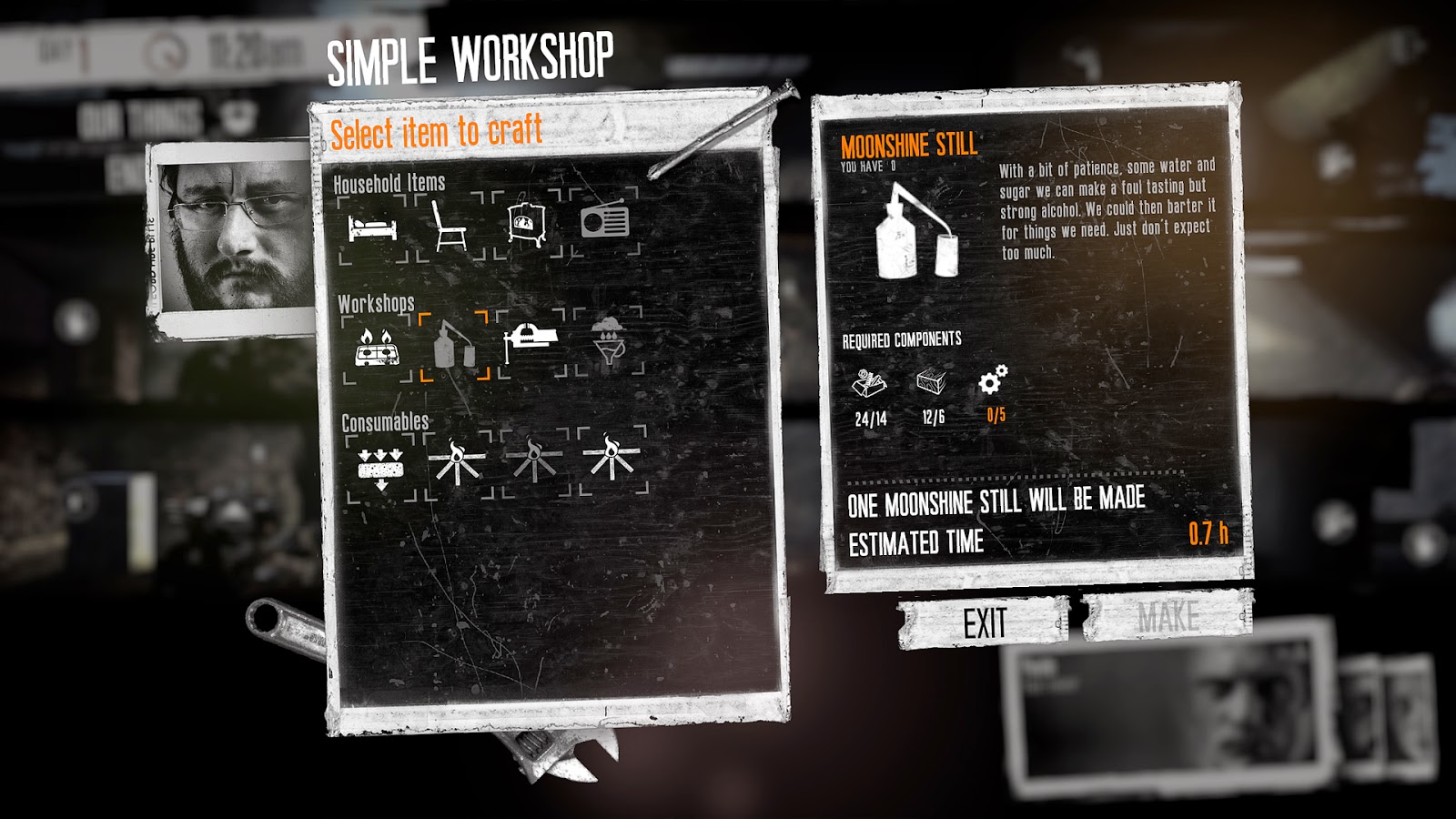 These are the moments that really shine in this game and make it different than most other things you’ll play this year.  Likely, trying to save that girl wouldn’t have affected the game that much.  But it affected my characters and in so doing, affected me.  The game also autosaves and there is no way to backtrack short of starting the game over.  You are committed to the decisions you make, for better or worse.

There were a couple of things that seemed like missed opportunities, unless I missed something along the way.  Every time someone came to the door during the day, I was worried that it would be a group of thugs that would want to muscle in. That never seemed to happen, though; it was usually someone asking to trade or occasionally someone asking to join your party.  Those decisions felt important, and I always hesitated for a moment thinking to myself “should I just pretend no one is home?”  But I think a little more variety would have justified that fear.  Of course, it also feels silly to complain that the game wasn’t MORE willing to mess with you in the few moments of relative safety that you can find.

The visuals and the audio really drive home feeling of hopelessness as well.  The game has a slick art style; primarily black-and-white with pencil-type shading that makes keeps it interesting.  The audio is appropriately haunting or in some cases, very quiet, which again makes you feel alone and cut off from the rest of the world.  The game isn’t going to tax your system, unless you are running something very old.  It relies more on the art style than over-the-top graphical horsepower (which is the right decision in my mind).

The 2D perspective may seem a bit limiting when you are trying to sneak around out in the real world, but it makes you stop and take things slowly.  They also have some neat mechanics like peering through keyholes to help you see what it going on in the next room. 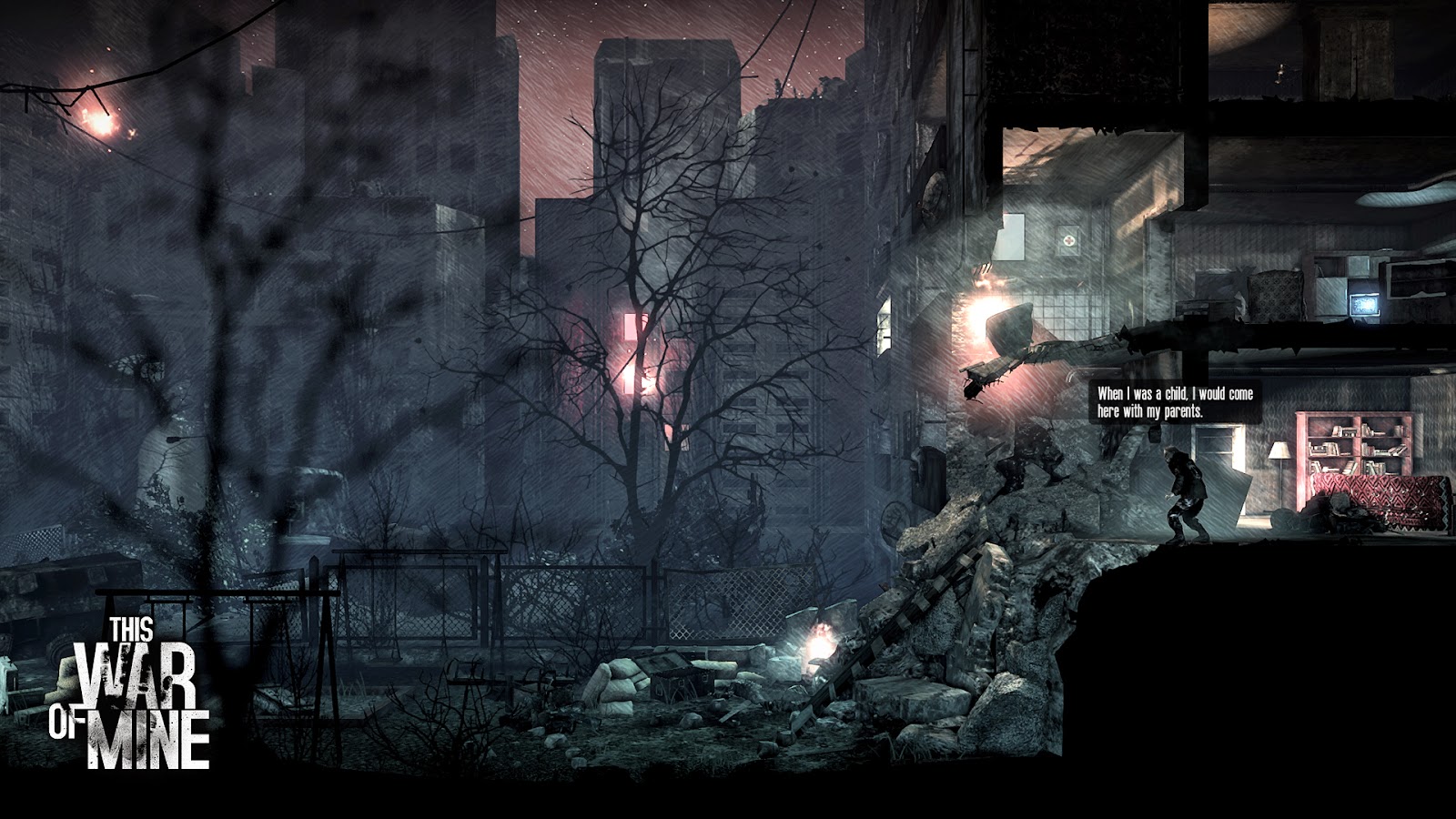 The environment, the visuals, the audio, and the gameplay all contribute to a very cohesive feeling that you just have to make it through the next day, whatever it takes.  The characters themselves, unfortunately, aren’t as memorable.  They each get a card that you can read with some basic history and personality, but other than that, there isn’t a lot to distinguish them.  I frequently thought about them in terms of their skills (the cook, the scavenger, etc).  I did get tired of some of their whining (I don’t care how much you miss cigarettes, we have bigger issues right now!!), but I also recognize that is really what it would be like to live in this world.

This game reminded me of Cormac McCarthy’s The Road.  There is no doubt that The Road was a very good book, oozing with personality and theme and an overwhelming sense of doom and gloom.  After finishing that book, I was glad I read it, but don’t think I’ll be reading it again any time soon.  If anything, its interpretation of the post-apocalyptic world was so strong and vivid that it drove home that if I was actually alive in that world, I’d be screwed.  Just keeping food on the table in a world where you can’t go to the grocery store is an intimidating task.

Same deal for This War of Mine.  By driving home all of the different things that you would have to worry about (food, bandits, sickness, etc), it really makes me appreciate how difficult that life would be.  It is a good game and it really gives you some things to think about while trying to balance your limited amount of resources and time.  At the same time, when I set the mouse down for the last time, I felt like I needed to take a break and go find some mindless shooter.

Very nice effort by 11 Bit Studios; I can’t wait to see what they tackle next.