Wet is one of those titles that barely lands on the cusp of what I consider a Retro Reflection. I usually look for the title to be more than five years old and not on the current generation of console. Considering it was a PlayStation 3 game from 2009, Wet just barely makes that cut. As for the game itself, it has a sort of Tarantino grindhouse vibe that helps to effectively cover the lackluster graphics and shallow storyline. 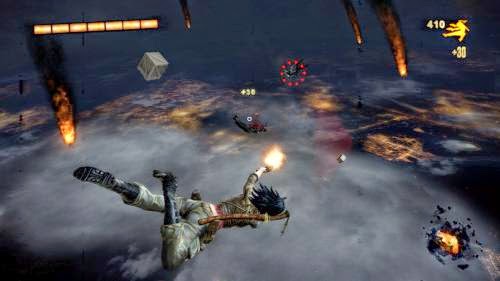 Wet is not a terribly long game. I have been thinking about playing it since it first released but only recently acquired it incredibly cheap and decided to dig into it over a weekend. In three play sessions over two days, I was able to beat the title. In some ways, the game feels even shorter. There are a handful of sequences that serve up instance death (perhaps most annoying among those was a free falling segment where you guide Rubi around debris that will kill you on contact or even almost-contact). These parts force you to memorize the patterns and discourage experimentation because Rubi’s death means that the whole segment is being done over again.

Higher levels of difficulty mean enemies can do massive amounts of damage as well. The good news is that there are frequent checkpoints throughout the game, but the bad news is death comes pretty easily and it forces you to replay segments over and over again. Wet never feels overwhelmingly hard however, because these specific sequences are spread out just enough that you do feel like you are making progress. Still, when all was said and done while the credits rolled, I realized just how little actual story there was and how much of my time was spent replaying sections multiple times. 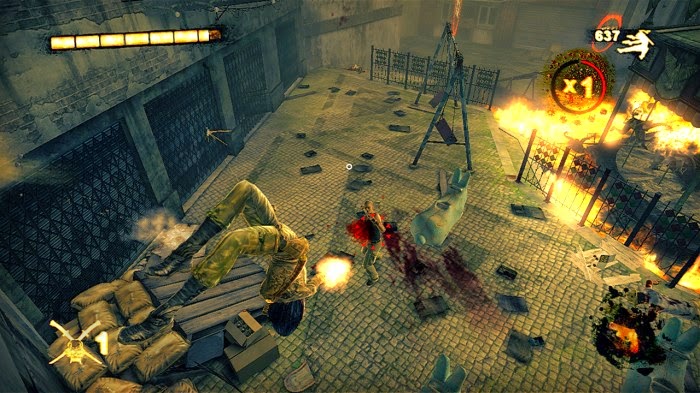 The main protagonist, Rubi Malone, is voiced by Eliza Dushku. Say what you will about her acting in some shows and movies, but she has always been most comfortable with the ‘tough girl’ role, and that carries over into her work in portraying Rubi. Rubi is a gun for hire and overall I liked her character well enough, but so little of the story goes into Rubi’s history or friends that she is basically what is shown on screen and little else, making her a somewhat flat character that comes across as a bit of a missed opportunity. Usually in these grindhouse/revenge style movies, the characters have a clear backstory for a lot of their actions. Here the bad guys basically are having a pissing match over a drug empire and Rubi gets tricked at one point into doing something and she decides to get even for it.

While the story itself might lack depth, Rubi’s character and the plot that is in place serves its purpose in providing a backdrop for lots of carnage. Wet plays out as a third person action title that has elements of melee combat, ranged, minor puzzle solving and lots of acrobatic maneuvers. Wet is really at its best when everything gets out of the way and lets Rubi jump, slide and flip around the environment shooting and slashing at her opponents. Exploding barrels, shotguns, pistols, submachine guns and fiery crossbow bolts keep the ranged game exciting while Rubi’s katana and wall-running and jumping antics can make for some memorable up-close-and-personal encounters. The more stylish the kills, the better the earned experience points which can then be dumped into different upgrade options such as increased weapon ammo or new abilities such as slashing enemies while dismounting from a wall run. 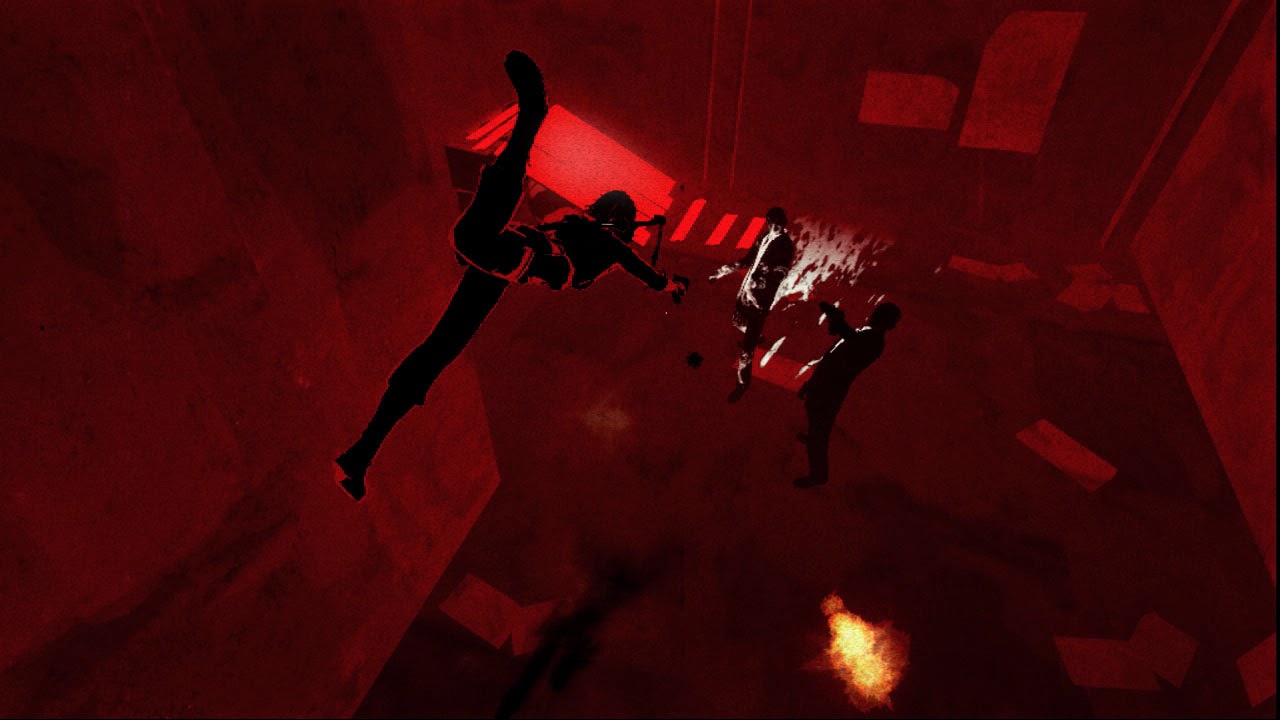 Where the action sometimes does not fare so well is in the platforming elements. Pressing the left shoulder button illuminates the parts of the environment Rubi can cling to, but sometimes those jumps are longer than they look and this can lead to some frustrating trial and error that can punt Rubi back too the last checkpoint, like the sudden death scenarios mentioned before. It is a shame, because the actual running and jumping usually feels pretty good. Instead of a smooth experience like Prince of Persia or an Assassin’s Creed game however, Rubi’s momentum grinds too a halt a bit too often when it would have been more fun to make the experience more fluid and perhaps a bit less penalizing.

While combat makes up most of the experience, there are deviations in it that help Wet’s pacing. There are a couple of scenes where Rubi is navigating speeding traffic, jumping from one car to the next while shooting opponents. There are rage sequences where the screen takes on an incredibly stylized red and black appearance where enemies are really just fodder as Ruby tries to find the next exit. Neither of these components would have been strong enough on their own to make a compelling game, but they do serve up some welcome variety when they occur. 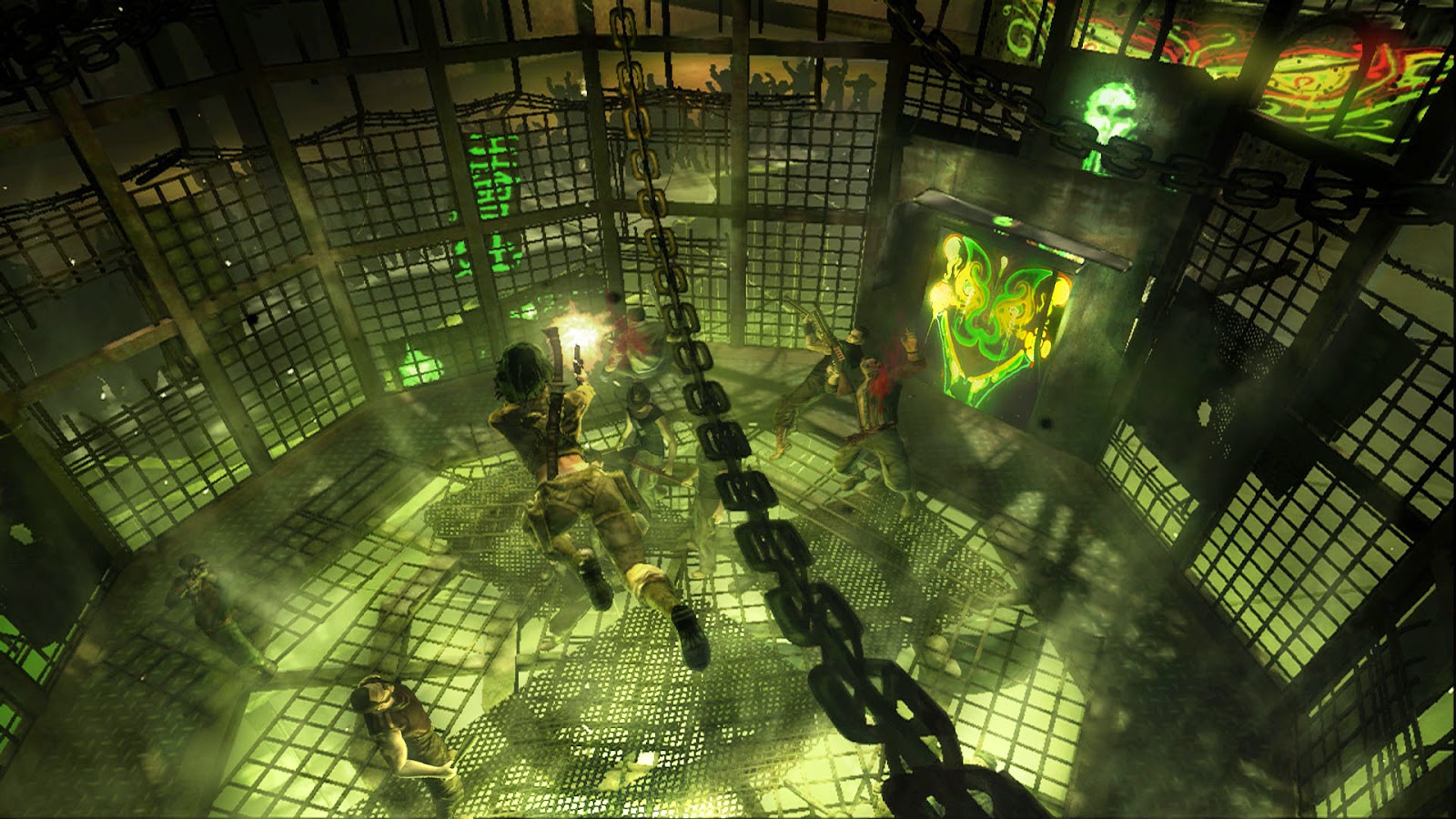 The greatest letdown  however, is in the end sequence. I will not go into details, but while most of Wet relies on quick reflexes and only a handful of quick time events, the entire final showdown is just one long quick time event. I suspect that this was done to create a more cinematic feel for the showdown, but it is hard to take in the visuals when one has to focus on what button to press next. The end result is an underwhelming slow conclusion to what had been a more fast-paced game.

There had been rumors of a Wet 2 in the works before it was cancelled, which is a bit of a shame because while Wet certainly has its flaws, I had fun with it more often than not. If you are looking for a cheap console game that will help chew up a weekend, you can do a lot worse than Rubi’s adventures for about five or ten dollars. Strong language and plenty of violence means that this one is not for the kiddies, but I enjoyed it all the same. This is a Retro Reflection and not a full on review, but in the end if I was scoring out of ten, I would probably give it around six and a half. 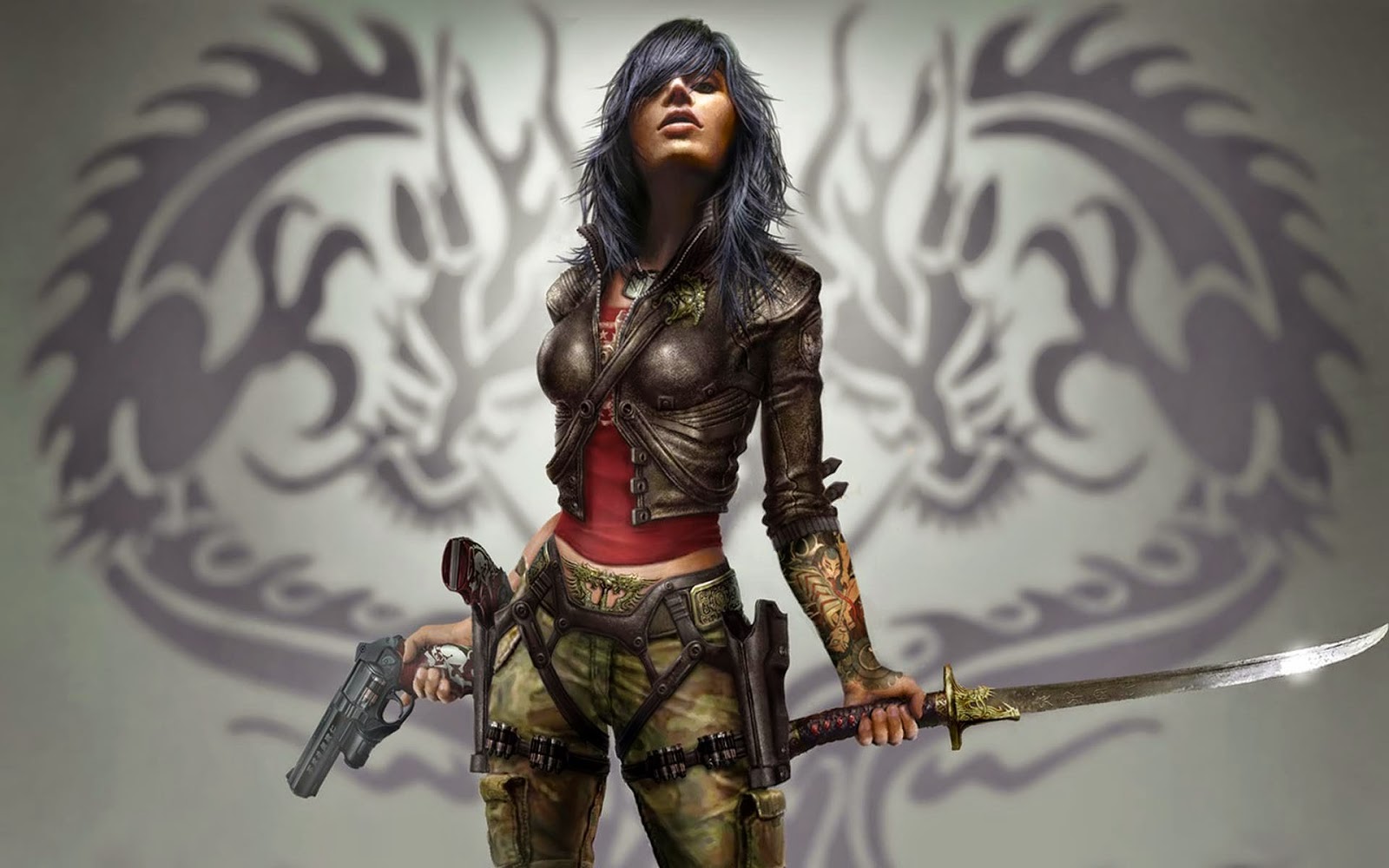