comments Share
You are reading
Whisper of a Rose – PC Review

Whisper of a Rose is the latest offering from RosePortal Games, the studio behind the wonderful Sweet Lily Dreams. The theme of a heroine and her dreams is back, this time following a young woman named Melrose who feels out of place and full of sorrow in the waking world and in an effort to cope with real life she, like many of us, turns to her imagination. Unfortunately there is a twist to her situation which leads to real danger and it is up to you and a band of party members to once again to put a stop to the danger that threatens the world in her dreams. Will Whisper of a Rose be just as touching as Sweet Lily Dreams? That is the question I asked going into it, but the answer was not entirely what I had hoped for. 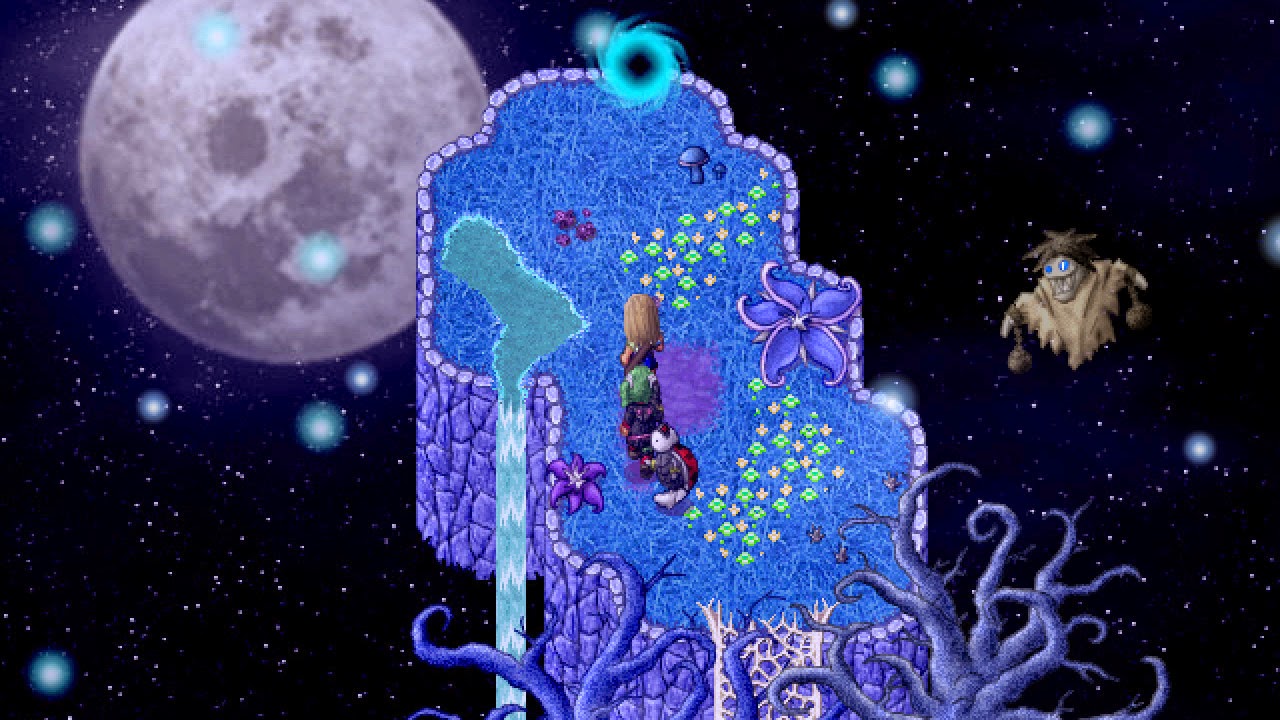 Given that Whisper of a Rose is the spiritual successor to Sweet Lily Dreams, the graphics for Rose are very reminiscent of Sweet Lily Dreams. Built on the vein of classic Super Nintendo-era RPGs, Rose will certainly appeal to the older generation of gamers like most of us here at Chalgyr’s Game Room who have a special place in their heart for the glorious 16 and 32-bit era of video games. Using well animated sprites and special effects, you will be thrust into a fantastical dream world where this new reality is in extreme danger that has a dark and oppressive color scheme, mixed in with colorful effects and characters. While the animation is good, they could be a wee bit better, and I found that while similar to Lily, Rose’s sprites are not as nice.

That may be simply due to my very emotional attachment to Sweet Lily Dreams, given it was very touching and came to me at a pivotal time in my life. Rose’s graphics are nice but do not click with me as well as Lily’s did, though in retrospect I wonder if it is because the world seems more cluttered, busier than in Sweet Lily Dreams. I do not know, there was something just off about the graphics. Now, I will be the first to admit that on an objective level, sprite for sprite Whisper of a Rose actually looks better than Sweet Lily Dreams, but to be fully invested in a game the atmosphere needs to click, and that atmosphere as presented by Whisper of a Rose simply did not click with me. 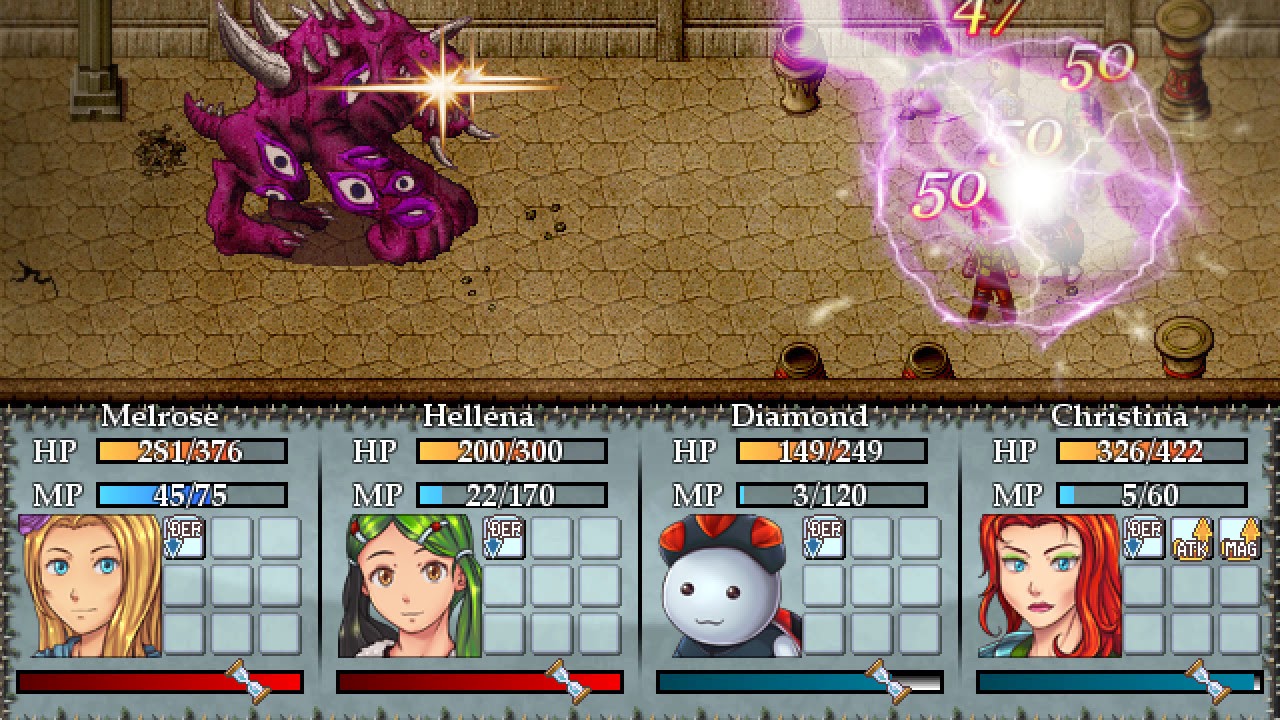 While Rose’s graphics were not as complete or nice as Lily’s, the audio is certainly better. RosePortal Games has certainly grown as a development studio and it is most noticeable in the audio. Rich effects, a solid soundtrack, and the little voice acting that is there is mature, well done, and fits nicely into the overall aesthetic of the game. One of the things I have always loved about the 16-bit era of video games is that the audio always seemed cleaner, better even, than present-day content. Almost like the current games are trying to overload you with sounds coming from all corners which can have an almost white noise effect on a gamer; I find myself tuning out unnecessary audio in a lot of games these days, yet with Whispers of a Rose it is just right, whether you are simply exploring an area or if you are in a heated battle, it just feels correct.

The major aspect that I enjoyed in Whisper of a Rose was combat; honestly, were I sitting at the desk with an old Super Nintendo controller in my hands rather than the mouse/keyboard, I would swear that it was 1994 again. The turn-based side-profile combat ala the original Final Fantasy titles, that is used in Whispers of a Rose just feels so right. Maybe it is just my old self longing for some classic JRPG goodness after playing about a million hours wandering through Skyrim, slaying dragons and the like, but the combat in Rose just clicked. 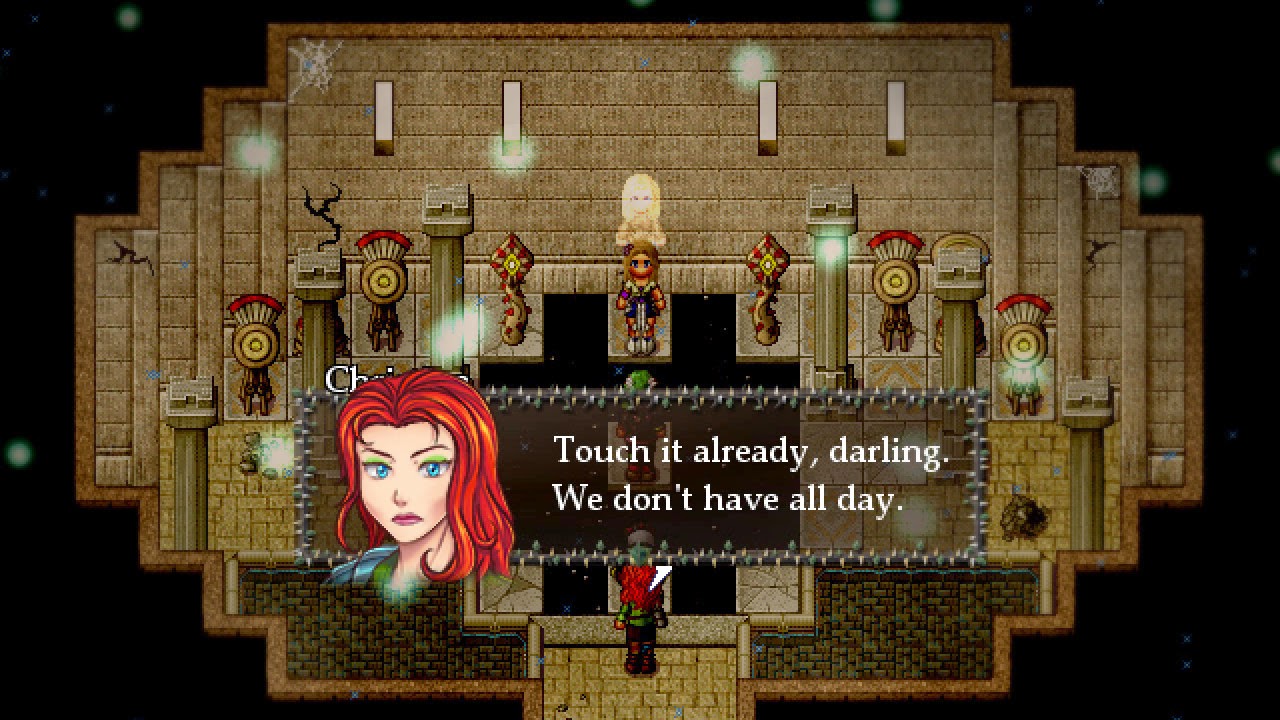 Classic is the best term that describes the combat so fans of old Nintendo and Super Nintend-era roleplaying games will certainly enjoy Rose. You will have your basic Attack, Defend, Item, and Skill options, all of which are fairly self-explanatory. There are a few neat little things like timing attacks to help minimize damage against you/maximize damage against the enemy, but it is all fairly basic. The biggest issue that I ran into was an odd framerate drop when there were a number of party members / enemies on screen at once, and I suspect that it is not an issue with the computer, since I am able to run far more demanding games on my computer than a simple RPG such as Rose; looking around the Steam community there are a number of different threads pertaining to lag spikes and framerate issues, but I only saw it in some of the more demanding fights and even then, only a handful of times.

Whisper of a Rose is a decent game and a good fix for gamers looking for classic RPG experiences. At times I would feel like I was playing EarthBound or one of the original Final Fantasy games and at other times it felt new and fresh. Optimizing the game to run better would certainly help and, if at all possible, increasing the number of animations per sprite would also greatly improve the gameplay, though that will likely not happen now that the title has been fully released. That is a shame too, since a snappier appearance in combat with better framerate can go a long way to reduce frustration. The story of Melrose was fun to follow but in no way was it nearly as touching as Sweet Lily Dreams and when I sit back and compare the two, it is almost as if Whispers of a Rose was the ‘rookie’ release and Sweet Lily Dreams was the more mature, more well-received release. Faults aside though, Whispers of a Rose is still an enjoyable trip down nostalgia lane.