In many ways 2014 felt like ‘year of the remake’, but I think 2015 might be close on its heels already. Thankfully this is a title that still looks and feels great. Ace Combat: Assault Horizon Legacy+ probably did not need a remake, but I am glad it got one all the same. 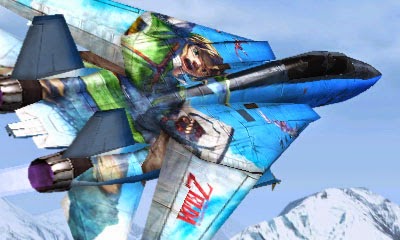 The graphics are fine, but not the best around – especially in comparison to other recent 3DS titles. Granted, things like the water, reflections, bloom, and even all of the entities themselves (jets, boats, guns, etc.), are really sharp. Where the visuals lack is in a lot of the texturing for other things. The biggest offender is the terrain, which can be best described as appalling most of the time. It is made to look as if it’s some sort of city from above, with a few big buildings sprinkled in here and there. The only way I can adequately describe how much I dislike the terrain is by describing it as a series of mismatched shapes made out of painted cardboard and then someone lowered the resolution a great deal. They are that bland and pixelated. The rest of the graphics are serviceable to good, however. This is especially true of the jets themselves.

The sound effects are pretty varied and solid while the music choices go for a lot of heavy rock or rap music. That might not be to everyone’s tastes, but it suits the hard driving tempo of the game. While these make up the majority of the music, there are some interesting ‘epic fight’ or orchestral beats that come into play here and there. The sound effects while varied for a shooter, still have a good deal of repetition to them. These are aided by solid voice acting played out through a sort of radio filter that helps to make things sound a bit more authentic. It would have been nice to see a bit more distinction between the same grunt sound used for each unnamed Pilot A, B or C that comes along. 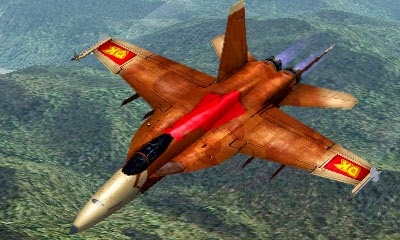 The story itself is somewhat typical with recurring character themes. Each chapter is built around a particular objective such as ‘defend the port’, ‘escort the VIP’ or ‘kill the enemy pilots’. None of these are terribly deep and character interactions are just straight dialogue with no deviation in the story itself. After a few levels, you get a pretty good idea of how the rest of your time will be spent. One of the few choices to be made in the game itself is the option to choose between one of two pilots to assist you in the missions. This basically boils down to a cosmetic choice between a male and female during missions. Because of these somewhat limited interactions and the predictable notes that the story takes (you start off trying to prove your chops to your chosen assistant only to earn their respect during the final paces of the game). It basically sets the table for the meal without doing anything fancy along the way.

At this point, one might think that Ace Combat: Assault Horizon Legacy+ does not have a lot to offer players, but up until now it has all been window dressing to the gameplay, which is where Ace Combat really shines. There are enough advanced gameplay mechanics to make an already action-packed game feel deeper than most other combat flying titles. A single enemy is seldom a true threat, but when you are talking about half a dozen? Zipping in and around in these dogfights is beyond addicting. It is almost too good at times, because one can forget about their objectives and lose that way. You need to make sure that your objectives time out, but these never feel like cheap losses. You have every opportunity to recover from a rough patch and put a level away. 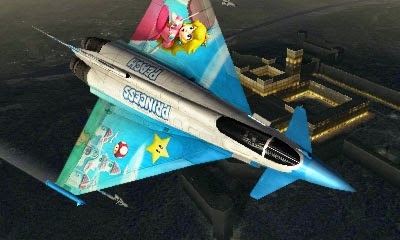 More than just the mechanics, the jets themselves offer impressive reason to come back time and again. Stalling is one of the more advance mechanics that Ace Combat implements. Paying attention to your stability and elevation is key. The game teaches you mechanics naturally, such as one mission where you are focused on bombers in high altitude. If you try too handbrake or slow down too much, you are very likely to stall out at this height. These subtle bits of level design help to teach you what you need to know without holding your hand throughout a bunch of completely meaningless training levels at the beginning of the game.

Another nice perk is the use of amiibos, because in Ace Combat they are incredibly helpful. They do not bring much in the way of ‘new’ elements to the gameplay, but they do unlock some very powerful (some might argue overpowered – at least in the early levels) items. They do not break the game, but these unlocks can take a lot of the stress out of the first third of the game.

With fast, zipping gameplay such as this, it is entirely too easy to lose track of time while playing Ace Combat: Assault Horizon Legacy+. It is a shame that the story and visuals could not be somewhat stronger, because the core game makes for some outstanding fun. The amiibo support is a new trick for your virtual dogfight as well, but when you boil everything down to the game itself, Ace Combat soars.