Casa Grande by Ravensburger Games is a unique title that does not fall into the typical ‘card’ or ‘dice’ game categories. There is a die involved, and it is needed to inject a bit of good and bad luck into the game, but Casa Grande is much more centered on strategy than just good fortune. 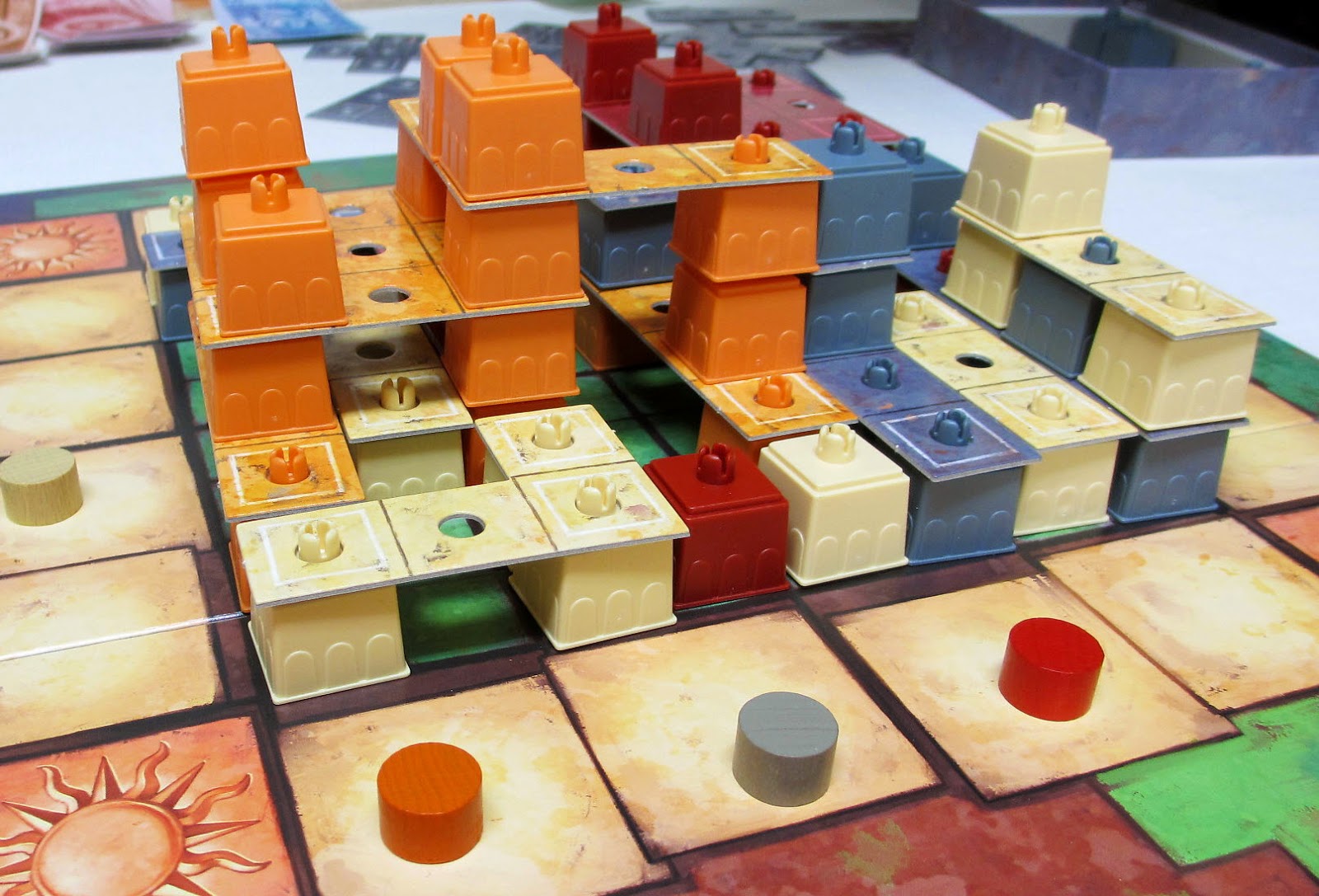 Casa Grande is all about building – outward and upward. Each player receives a set number of blocks and Tetris-like platforms. Each player takes turns trolling the die and moving their marker around the board. Where the player comes to a stop, they then have to place a plastic support piece in one of the squares adjacent to where they landed. These squares are quite numerous at each stop, forcing the player to plan ahead. The reason?

Because those cardboard platforms need to be placed on top of blocks. That sounds easy enough, but there are a couple of catches. One, you need to match specific holes in the platform with pieces of your color. For example, a straight platform measuring four squares in length requires that each end piece be supported by one of the supports in your color. These required slots are outlined in white to indicate their purpose. There are two more holes on the platform, which means it can be laid out over any kind of piece (or none) occupying the space below it.

Once a platform has been set up, the player is paid for their construction work. That payment is equal to the number of blocks that piece made up, multiplied by what level the platform was on. Once a platform is built, support pieces can be stacked up on top of those lower supporting pieces. This essentially has you creating platforms working upward as well as outward. This also means that level modifiers can be a huge factor when assembling pieces on the board.

The game ends on the turn that one of the players uses their last support piece. The builders then tally up their earnings to declare a winner.

This was one of the quicker games to learn, but it will likely appeal to slightly older kids. While listed as a family game, I would not imagine kids much younger than ten or eleven would get as much out of it as teens or adults. That is not to say it might not provide some good brain teasing functionality for younger players with its need for multipliers and spacial recognition, but the pace of Casa Grande can be a somewhat slow one. Initial rounds go by quickly since there is not much clutter on the game board yet, but by the end of the game everyone is over analyzing each turn.

For one, there is less level real estate to work with (less pronounced in a two player game than a four), but additionally you are hyper aware of what your opponents are trying too do. A five square platform piece is not a real big deal on the first level, but on the third or fourth? That adds up quickly, and I know I spent as much (if not more) of my time trying to thwart what my opponents were up to than cashing out myself.

While it was easy to learn, that simplicity has some disadvantages as well. There is a very repetitious nature to the game that may not appeal to some people. I personally liked the fact that it was built more around my strategy than luck like some games are, but there was a lot less conversation between players. Maybe it was the lack of anything to read on cards or explaining a move to someone else during the course of play, but Casa Grande was a slightly quieter, more subdued game than I was used to from this group. 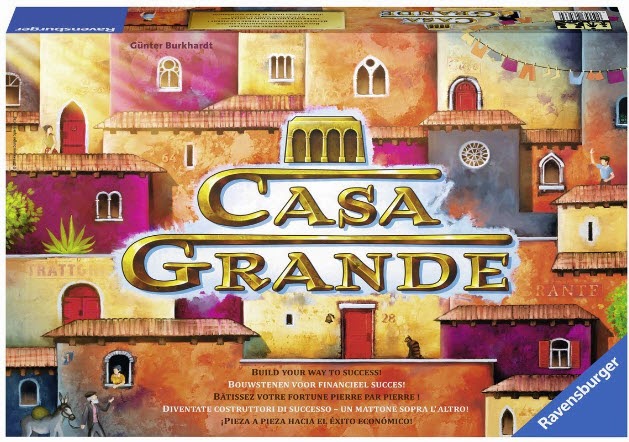 There is a bit of dexterity involved with getting pieces stacked up on top of one another and building the structure upwards. I can see that proving a challenge to really young (or really old I suppose) players with potentially unsteady hands. The plastic bases are sturdy, but the platforms are just cardboard. Those pieces are pretty thick, but I can see where a disaster (like someone losing their balance and falling forward) might much some of those pieces up if weight was suddenly put on them (with those bases at the corners/ends of the platforms, you are kind of setting them up like one might put a board on two blocks to break in martial arts). Thankfully no such issues have occurred, but there is cause for some durability concerns with younger gamers. The packaging itself is somewhat loose in the box. Each color has a smaller box and there is a longer one for the other parts, but it felt a bit odd packing it up to put away.

It was interesting when the game concluded and we were counting up our money. The structure before us actually looked pretty cool. It did not really have a lot of rhyme or reason to it, but after spending forty minutes looking at very narrow slices of the board in order to score points or figure out how to block my opponents from scoring points, it was not until the game concluded that I sat back and fully took in what we had built each time.

Casa Grande is a different kind of game to be sure, and one that might not appeal to really young players or those looking for a bit more random luck in their game than the basic roll-and-move mechanic. I do wish it encouraged a bit more conversation from the people playing it, but the game itself is well-thought out. It is more entertaining with three or four players than just two.