Dungeon Roll is a push your luck style of game that actually proves surprisingly fun once you wade through the somewhat murky rulebook. This is a dice rolling game that is quick to set up and play, but has plenty of replay value in its small, portable package. Founded on a successful Kickstarter, Dungeon Roll has a great dungeon crawling theme that plays out in fast, unpredictable fashion. 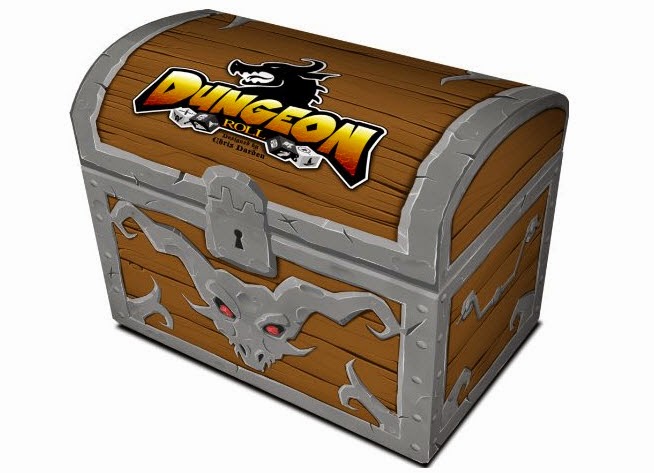 Immediately the packing jumps out as distinctive. It is a small treasure chest which contains all of the game’s components. The game itself does not have a lot of parts, but the design is clever and helps to set the tone for what proves to be an addictive game. Included in the chest are tokens for treasure and experience, two different sets of dice, a larger counter die, some character cards and an instruction manual.

Once you unpack everything, the first thing you are likely to do (after marveling at the rather cool-looking dice) is want to read the instruction manual. That can make for a slightly strained initial impression, because the instructions are somewhat poorly laid out and worded. The booklet is small, which makes sense since they want it to fit in the chest, but I wonder if it might not make sense to have it on an unfolding ‘map’ type of sheet. This would have given more room to include examples on how the turns might go (a common item in tabletop rulebooks) as well as giving you more information at a glance (as opposed to having to hunt from one page to another in case you sort-of-maybe-kind-of-recall seeing something relevant two pages prior). The rules are just vague enough that the first game is a slow, almost awkward affair. I recall reading it and noting that some people online saying it is just easier to watch YouTube videos of the play, which is anything but a ringing endorsement for the rule clarity.

However, once you settle in and understand the mechanics, Dungeon Roll proves to be a lot of fun to play. You owe it to yourself to give this one a chance, because while the first impression might be a bit rough, it makes a better lasting one in my experience. The mechanics are simple but effective. One player is the adventurer. This person rolls the seven white dice and this forms their party. The party can be made up of specific classes (masks for thieves, swords for fighters, etc) and scrolls. Then the player to your left is for all intents and purposes your enemy for a time. 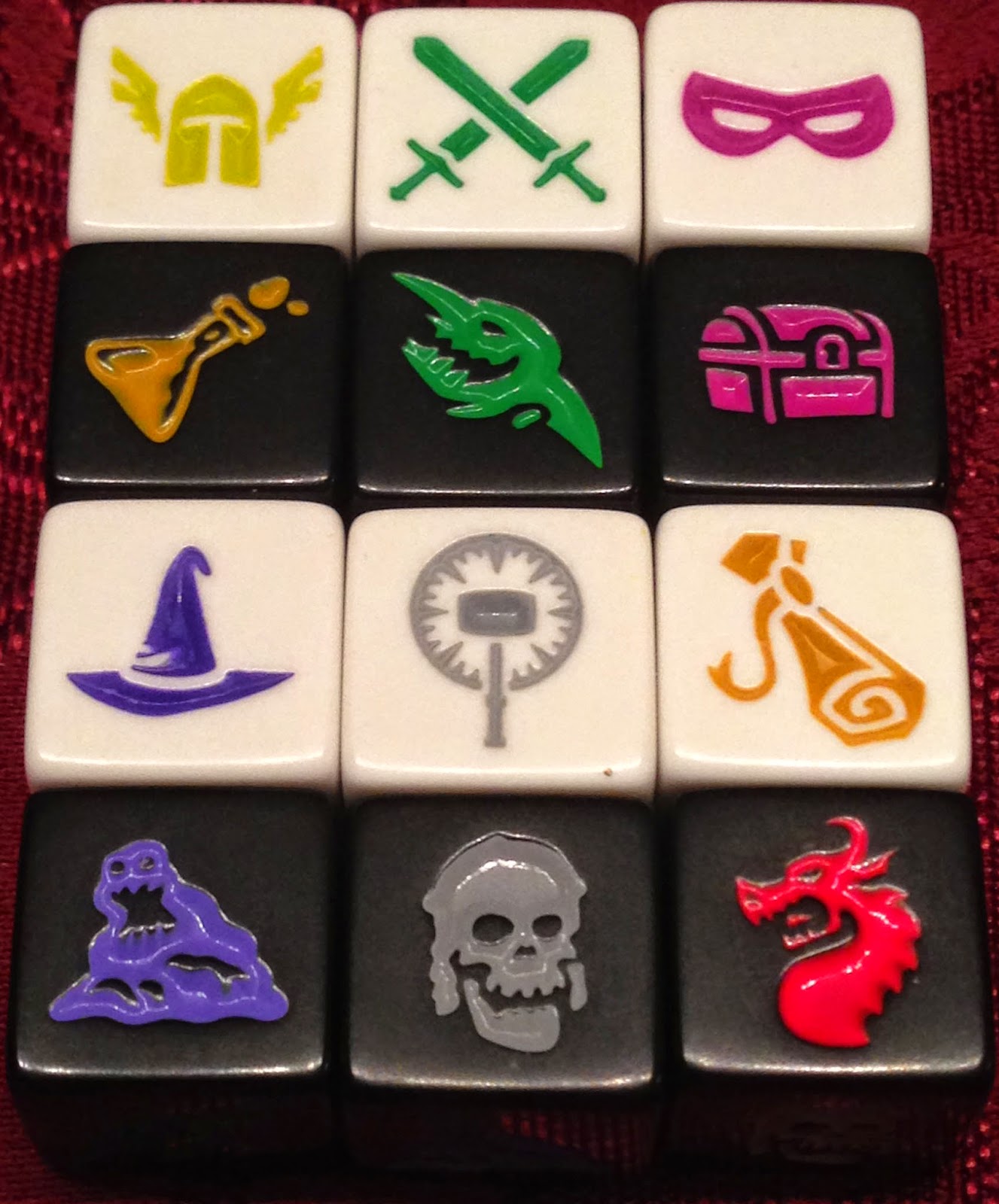 This other player sets a ten sided die counter to the number one, representing what level of the dungeon you are on. That player then rolls one black die for each level you are on. Level one? He or she rolls once, but if you are on level five, they roll five. There are some slight variations on this (for example there are only seven enemy dice), but that is the general structure found here. Then the game is all about luck and resource management.

If your opponent rolls a dragon, you set that die aside – until they build up to three. Then you have to fight a dragon. This is a special creature, because it requires that you kill it with three of your party dice – each one being of a different class. If you had three champions? Tough, you cannot kill it. Have a wizard, thief and a champion? The dragon dies, and you get bonus experience and treasure. However, as dangerous as the lurking dragon possibility is, the majority of your time will be spent fighting slimes and skeletons while unlocking treasure chests.

Party management is really just a game of attrition. Any one character in your party (that you rolled at the start of your turn) can kill any one creature or open a treasure chest. However, this action ‘uses up’ your party member, and they then go to your graveyard. You only started with seven at most, so while the first or second level of the dungeon is a breeze, making it to that eighth or ninth level can be quite a challenge. However, each class has a sort of ‘sweep’ ability. Mages can kill one skeleton or open one chest, but they can kill up to three slimes. A rogue can only kill one of any type of creature, but they can open up multiple treasure chests before bowing out.

At the beginning of the game, you also choose one of several character cards. Each card has a pair of abilities. One is a persistent ability such as all wizards can count as thieves and thieves can be used as wizards. Each character also has a single use per delve ability such as automatically killing two enemy monsters or turning an enemy skeleton into a friendly fighter character. Each time you beat a level, you earn an extra experience point at the end of your delve. Once your character earns five experience, they level up to an upgraded class with improved abilities. For example, the upgrade might allow the character to turn up to two skeletons into two fighters. 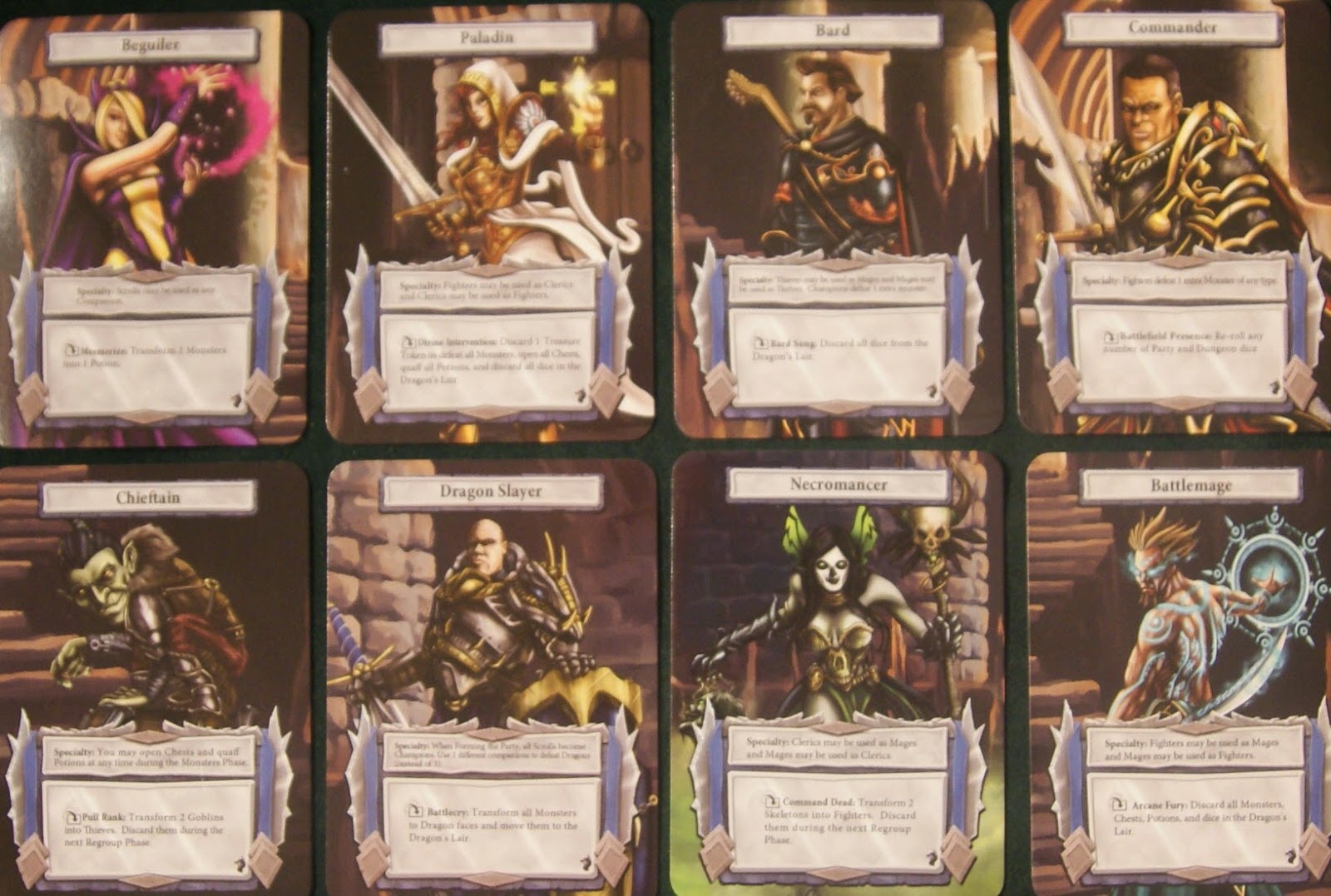 After clearing each level, the player is left to decide whether he or she wants to push deeper into the dungeon or to return back to the tavern to lick their wounds and sit safely until the next round. Play then passes to the next players on the left until each person has gone three times. After every participant has played three times, the treasures and experience earned are tallied up and the player with the highest total is the winner.

We found that a typical three player session only lasted about fifteen to twenty minutes, making Dungeon Roll an outstanding filler game. It is light and easy to play after you get that first one under your belt and figure out all of the mechanics. Dungeon Roll is probably best suited to two or three players, though you can have more. Unfortunately since only two players are engaged at any given time, the others are left waiting for something to do. Usually a delve only takes about three to five minutes, but if you are the fifth player, that means you might be waiting three players – or up to fifteen minutes – without much of anything to do but watch and provide whatever commentary comes to mind while sitting on the sidelines.

Dungeon Roll is a game that is hugely built on luck. There is absolutely strategy involved in how you want to use your characters or if you want to use your treasures or save them for the end game tally (for example, a Vorpal Sword can stand in during a battle as a fighter – but once you use it as such, it gets discarded in much the same way a die-based fighter would go to the graveyard. However, using it might mean the difference between finishing the level or losing and having to return to the inn without earning any experience. However, if you keep it, that sword gives you one more point during the final score tally). Because of this and the different character cards, there is actually a good deal of random unpredictability to the game. In our first dozen or so matches, none of the games really played out in the same way.

Dungeon Roll is not going to give you a deep sense of tactical strategy since most of the decision-making comes down to whether or not you want to spend your wizard or cleric now, or save it for the combat that may come on the next level. That being said, its unpredictable nature does create some pretty zany scenarios that had our group laughing when one of them pulled out an unexpected victory – or thought a bit too much of their luck and wound up dragon meat by having pushed on one level too far. The directions could use some clarity, but the game itself is an inspired bit of quick fun.