Zombies have become fodder, motive, or set dressing for a variety of genres in games today. There is the player interaction experience of DayZ orH1Z1, the brutal combat bloodbaths of Left 4 Dead and Call of Duty Zombies, and the story and character driven Walking Dead, and the suspenseful survival in Resident Evil. Many releases find themselves pigeonholed into one type of experience, directed by the story the designers want to tell. When a game comes along set in an open world but putting the impetus on characters and their interactions, it is a strangely refreshing experience. Dying Light is Techland’s second game looking to achieve that balance, and unrelated follow up to their Dead Island release a few years back. Does a fresh start in a similar setting allow Dying Light to realize its potential, or is it infected with shortcomings? 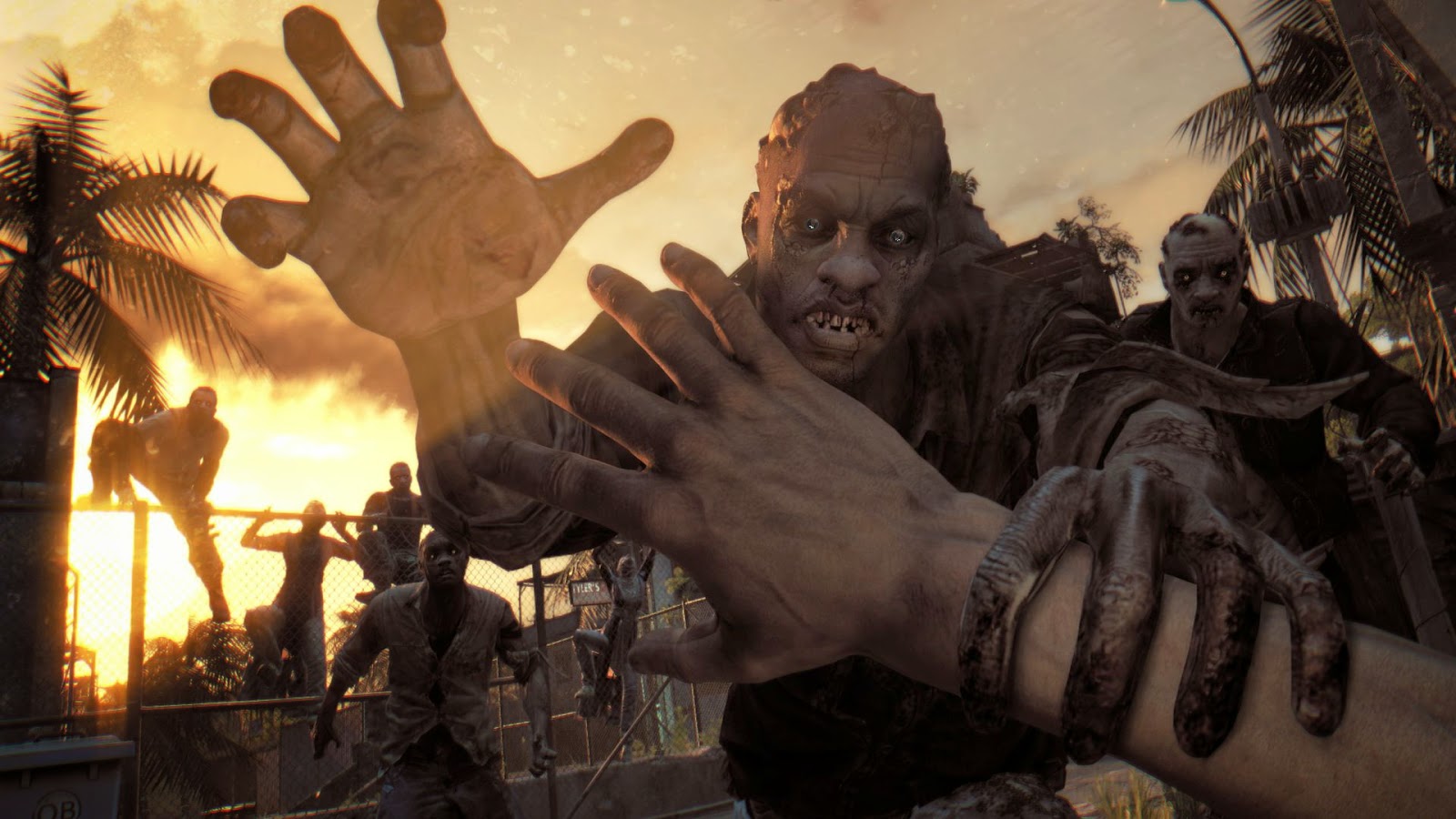 In 2014, the city of Harran is quarantined after being overrun with an aggressive mutation of rabies. This new virus, transmitted through saliva and blood, shows early symptoms of seizure and fatigue. Those that do not receive regular injections of a viral suppressant called Antizin will eventually turn into an Eater, a mutated individual only driven by consuming the flesh of those that are uninfected. The only contact that survivors have with the outside world is through regular airdrops of the antiviral from a humanitarian organization called the Global Relief Effort. An American operative for the GRE, protagonist Kyle Crane, is airdropped into Harran to carry out a vague mission to retrieve some sensitive files from a defected agent within the city.

After this initial setup though, the story falls into a predictable course of action, but with some poor writing containing a few plot holes and inexplicable motivations. The actors do an admirable job of portraying the desperation, disbelief, and depression of the situation. But the main story feels like it is shoehorning conflict more through sadistic madman Rais and forced encounters with him, than through the predicament in Harran itself. Some of the side missions are far more compelling than the rote plot. There is a great series of quests revolving around an old gunsmith that you are sent out to get some modifications from.

You find him holed up in a building wearing a wizards hat, entertaining a small group of children in an old preschool. Explaining away the world outside through magic and fairy tale, you become a heroic knight sent out to find a magic elixir of insulin for a little girl falling into diabetic shock. These touching little moments are mixed in with a series of other throwaway sidequests – plenty of which are much more generic sidequests – but tell a much more engaging tale of Harran and its trapped citizens. 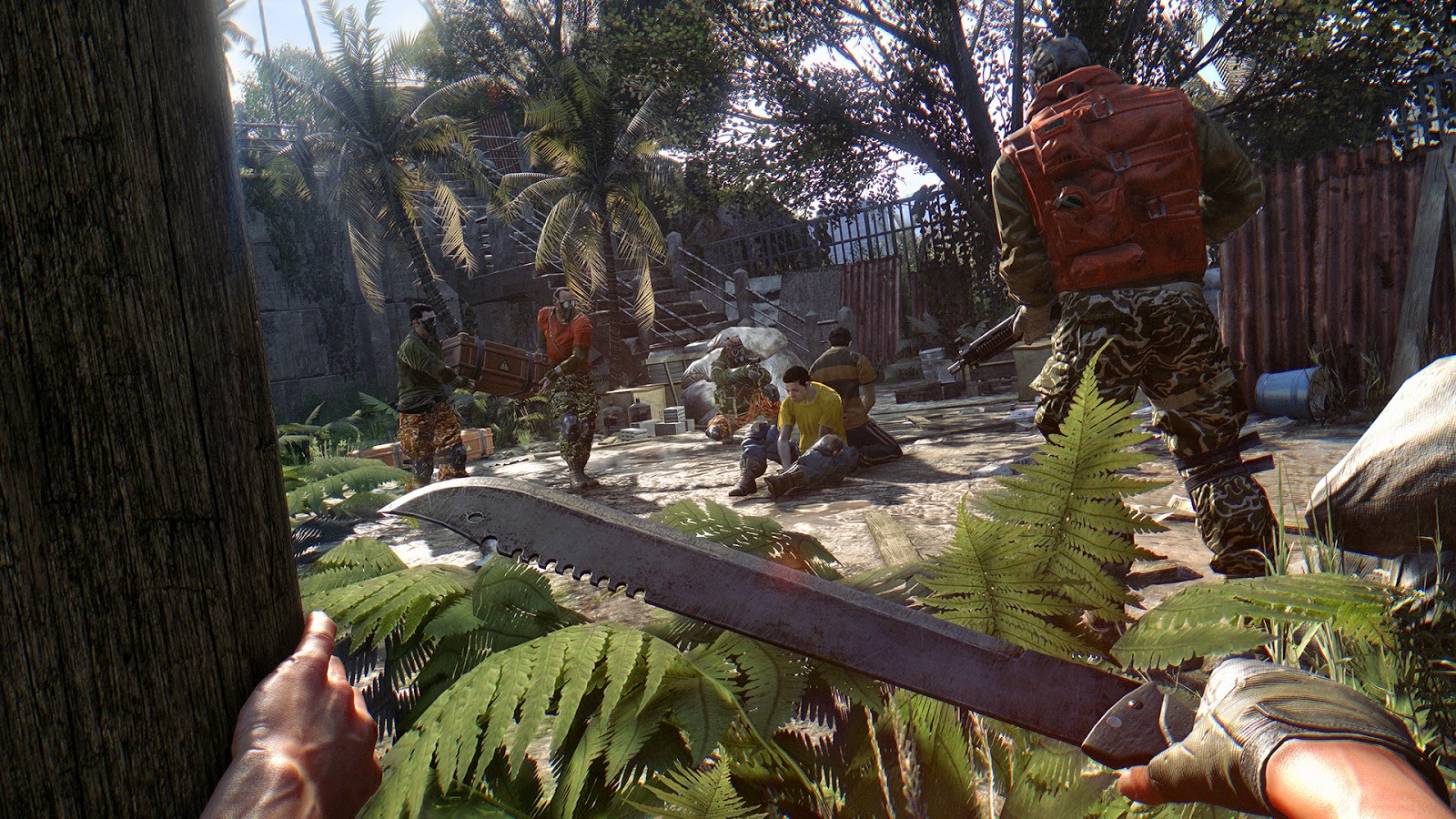 During the initial scenes, the game is quick to introduce one of core focuses of the game – parkour. The first foray is a death defying climb across a crane and through an abandoned building. While there are other grandiose scenarios such as climbing antenna towers and infiltrating fortified areas, the parkour is extremely useful in the general flow of the game. Tied entirely to the jump button, aiming at a ledge, car, or even zombies will let Crane vault and clamber around. The system works reasonably well for simple traversal and running from point A to point B, with the occasional misstep or failure to grab a ledge clearly within reach and eyesight. But it is nothing like you would get from an Assassins Creed or Mirrors Edge, feeling a bit more deliberate and trial-and-error based than facilitating easy egress. It really falls apart when forced into jumping puzzles, where nonreactive button prompts, short areas to get speed for jumps, or precise alignment conspire against you as you plummet to your death.

Coming from the developers of Dead Island, there is a hope for an engaging combat system, given the unique Analog combat that was available in that game. Unfortunately, Dying Light is another ball of boring, clunky wax. Primarily a melee focused game, Crane will have access to wooden boards, pipes, baseball bats, machetes, and eventually throwing stars, grenades, and firearms. But the melee is just a single button press, limited by a stamina bar. While it does seem that blows to the head and limbs can have the expected effect, the ability to actually aim those attacks is a crapshoot – there is no way to influence the direction or starting point of your melee swing, so although you may be aimed at the head, Crane may swing into the elbow. Certain additional abilities can be unlocked later on, allowing for stuns, vaults, and executions to be available, but effectively utilizing any of them when facing more than a couple zombies is extremely difficult. 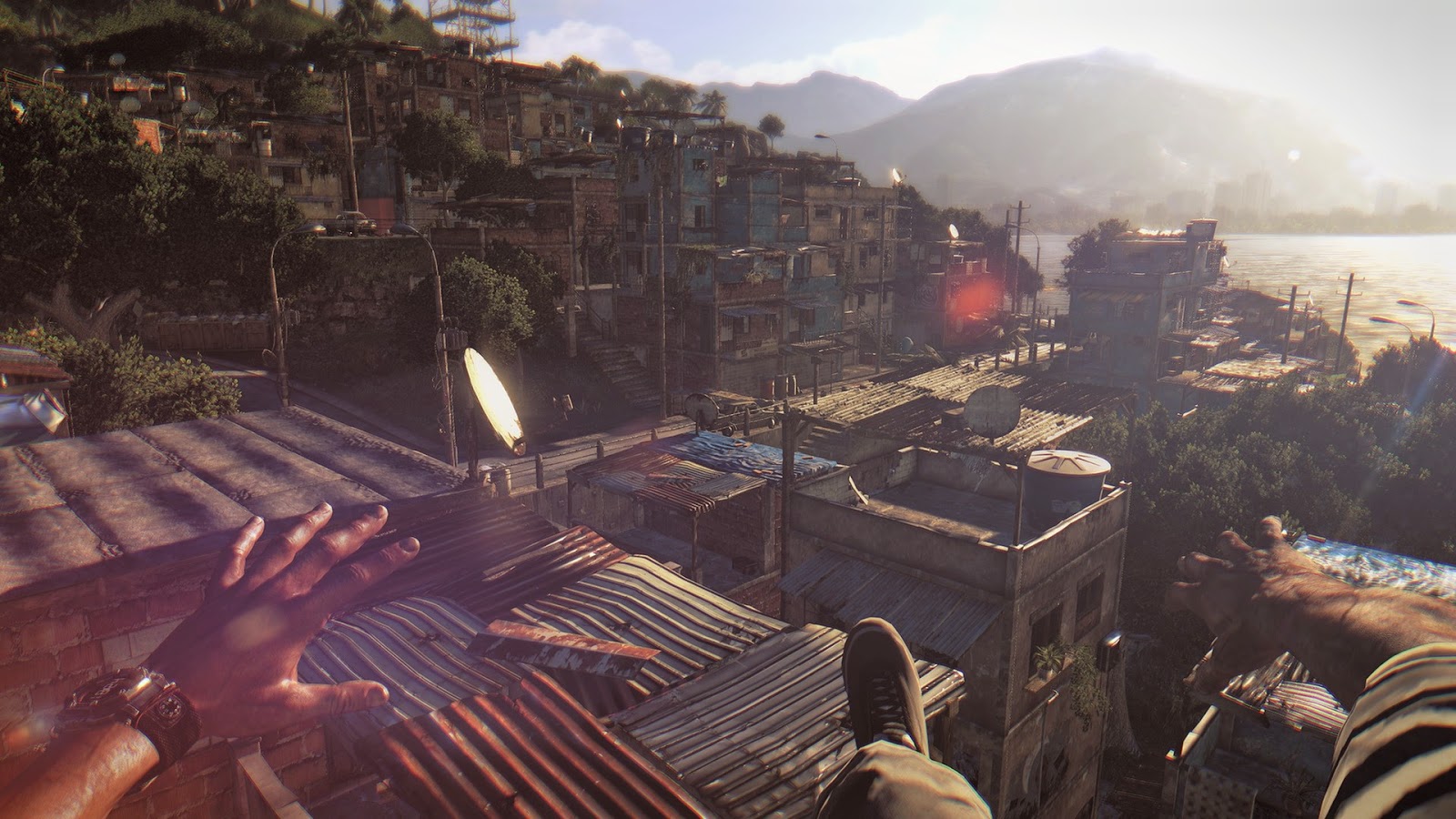 Arguably, this combat system gives a sense of being overwhelmed and outnumbered, and that to engage the enemy is futile. There is even a day and night cycle, where significantly tougher enemies emerge at night, almost turning it into a stealth game. Early on in the game, with flimsy weapons that deal menial damage and eventually break, becoming useless, that futility is evident – evasion is the name of the game. But the presence of a three forked skill tree, each levelled by use of their associated skill (parkour for Agility, story XP for Survivor, and combat for Power) fly in the face of that notion. Add in the fact that enemies progressively get tougher and varied in form of attack, experience gains are doubled for actions done at night, the ludicrously unfair bossfights, and presence of rival humans that have the ability to block your attacks (a skill that trained agent Crane is inexplicably incapable of), and you realize combat is an encouraged necessity.

In addition to the skill trees, there is a loot and crafting system that tries to keep things interesting. As mentioned earlier, all weapons have a durability rating, and a certain number of times they can be repaired before they break entirely. To showcase a weapons durability and effectiveness, the game employs the traditional ascending color coding of loot – grey, green, blue, purple, orange. The higher the tier, the more repairs, durability, damage, and modification slots are available. Along with weapons, different crafting components are acquired, such as plastic tubing, tin cans, power cables, gauze, and alcohol. As you find blueprints or unlock skills, components can be crafted into elemental weapons variants, projectiles, and elixirs that can alter your abilities. 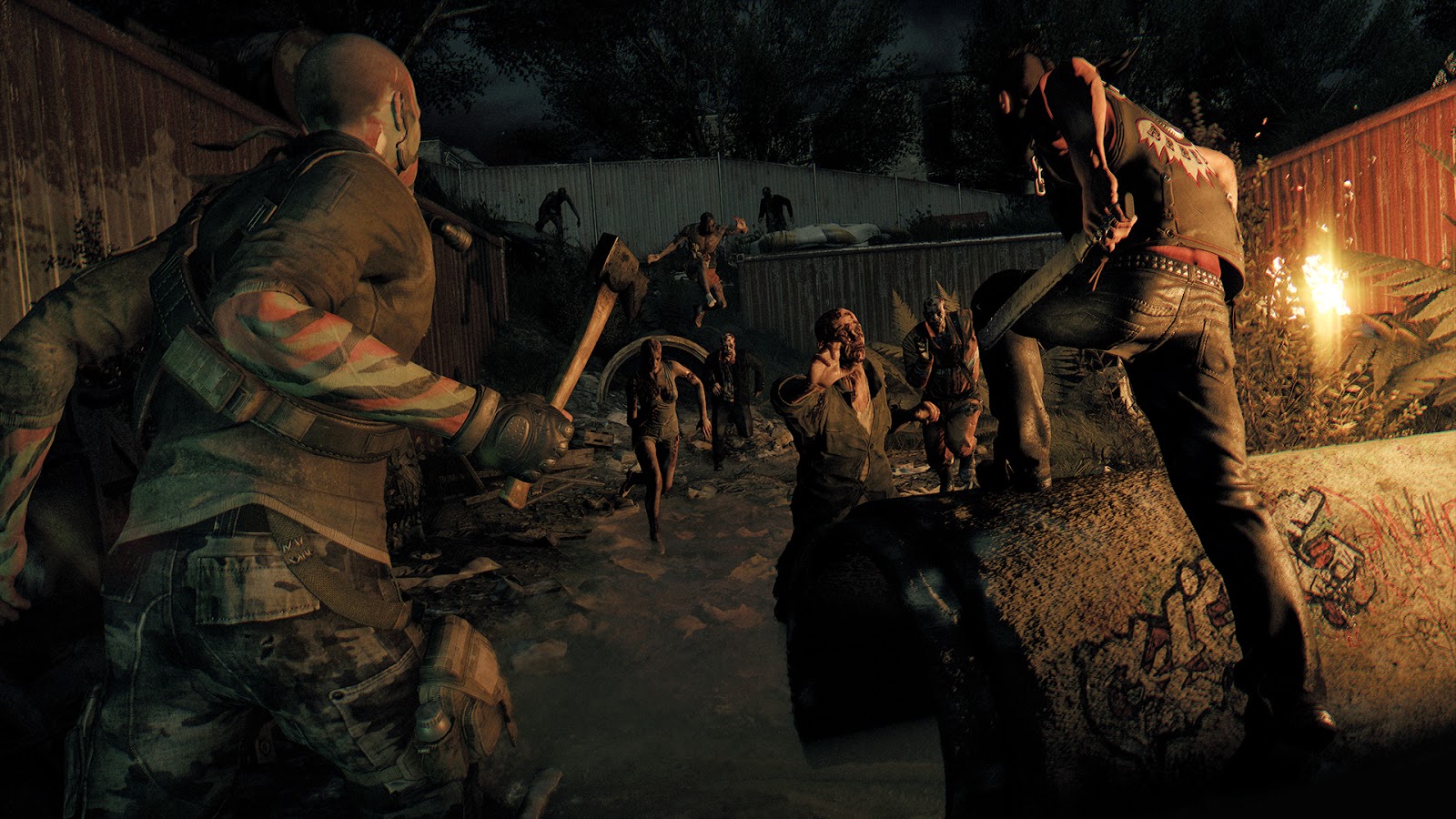 While there is a shortage of necessary materials at the outset (especially Gauze and Alcohol for the all too important medkits), I found that I had dozens of unnecessary components by the end of the game. What would have been very helpful would be the ability to craft a weapon mod such as the ones that increase durability or damage, but from what I could tell those had to be found out in the environment. It got to the point where I had a loadout comprised of throwaway weapons I used in typical combat, and then an orange modified weapon that I was afraid to even use unless I could tell I was in a major plot point.

Dying Light tries to do a lot of very different things and tie them all together, but fails to execute. It is a fairly good looking open world game littered with zombies and destruction, but hampered by an always-on film grain and strangely framey motion blur that cannot be disabled. A parkour system that is barely effective in general traversal and that fails when it is needed most. Combat that frequently leaves the player at a disadvantage, and yet forces confrontation. Crafting and loot that seem almost unnecessary, as the things that would be most beneficial like weapons and modifications still must be found pre-made. A predictable and lackluster story, where the enjoyable parts are tucked away as sidequests that can be overlooked entirely. Oh, and of course a few boss fights that find you inexplicably without any of your inventory available. What starts out feeling like a more stable take on Dead Island ends up feeling like an overreaching misstep where focus was spread too thin.