The realtime strategy genre was once a booming group of games, giving us juggernaut titles like Warcraft II, Command & Conquer Red Alert 3, Age Of Empires 2: Age of Kings, Homeworld and less known RTS goodies like Dark Reign, Tzar: The Burden of the Crown, and Warhammer 40K: Dawn of War. Since the release of StarCraft in the late 90’s though, the genre began to dwindle with few big releases outside of those massively popular titles. Blizzard Entertainment has effectively owned the RTS genre these last ten years and other developers seemed to have abandoned realtime strategy as a whole. 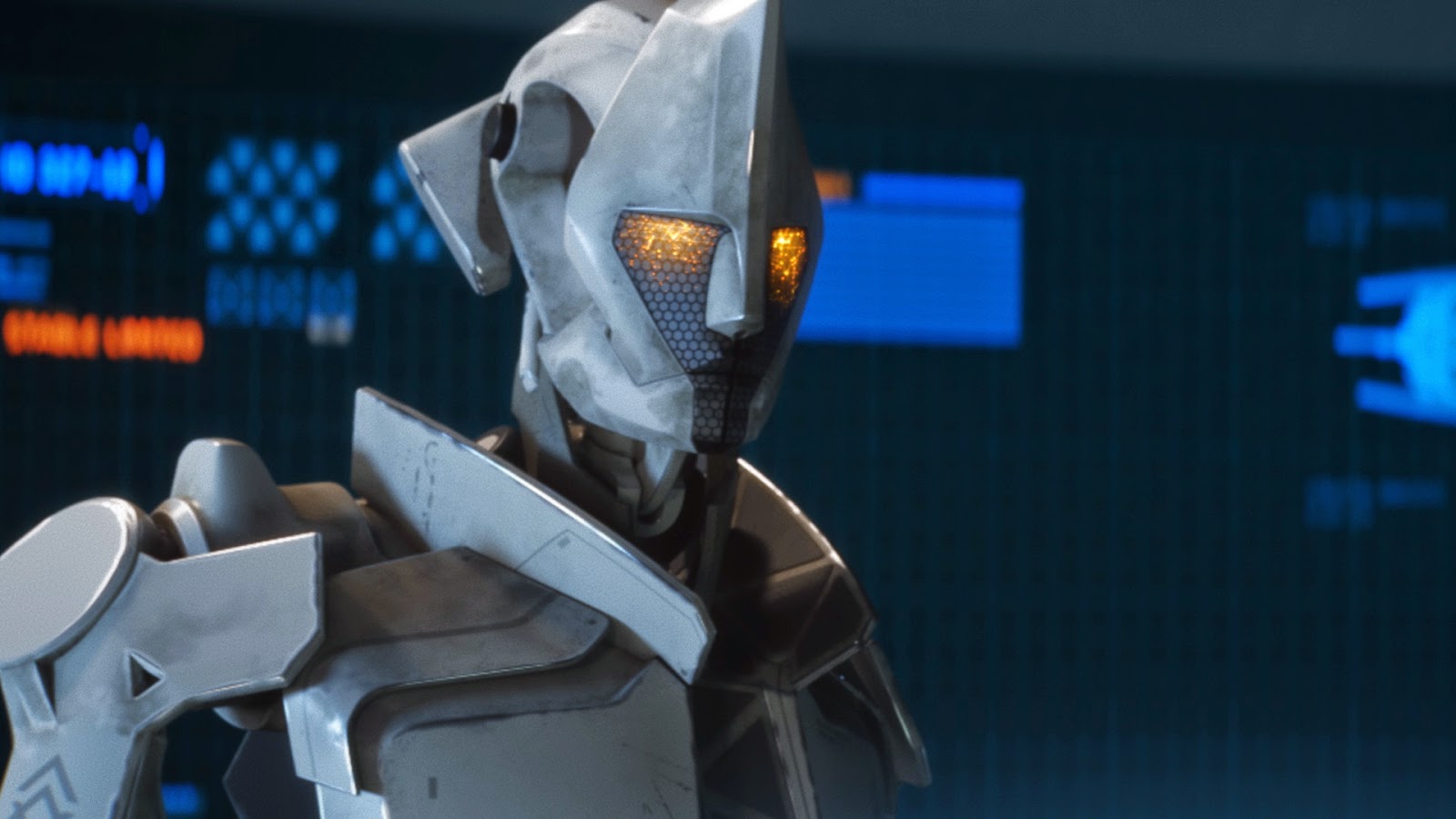 Recently though the genre is returning to its roots with titles like Pandora: First Contact and Meridian: New World
and most recently, the bizarrely named Grey Goo by Petroglyph, a studio
founded by ex-Westwood Studios developers (the original developers for
the Command & Conquer series). Grey Goo takes place centuries after
humanity left earth and life in the Milky Way has evolved greatly. Take
command of one of the three primary races in the galaxy, the honorable
Beta, the defensively talented Humans, or the bizarre and highly mobile
Goo as you fight for survival or supremacy over Ecosystem 9, an
extremely hostile yet resource-rich planet. Does Grey Goo reach back to
the roots of the RTS genre and carve a slice out of this slowly
re-emerging genre?

I do not know where to even start… Grey Goo is something both new and old all wrapped up into a stunningly beautiful package. Since I am not entirely sure how to even ease into this review I figure that I will just leap into it with gusto. Grey Goo is without a doubt the best looking RTS game available today. Starcraft II: Heart of the Swarm is nice looking, but Grey Goo makes it look like a game from the early 2000s. With absolutely stunning environments, gorgeously detailed units, complex building structures, and some of the most amazing FMV animation I have seen in a game. To elaborate a bit on the FMV animations in Grey Goo; between each mission there is a briefing which generally has a handful of different speakers that are portrayed as “talking heads” (just a shoulders-up view of the speaker) and holy cow are they gorgeous. 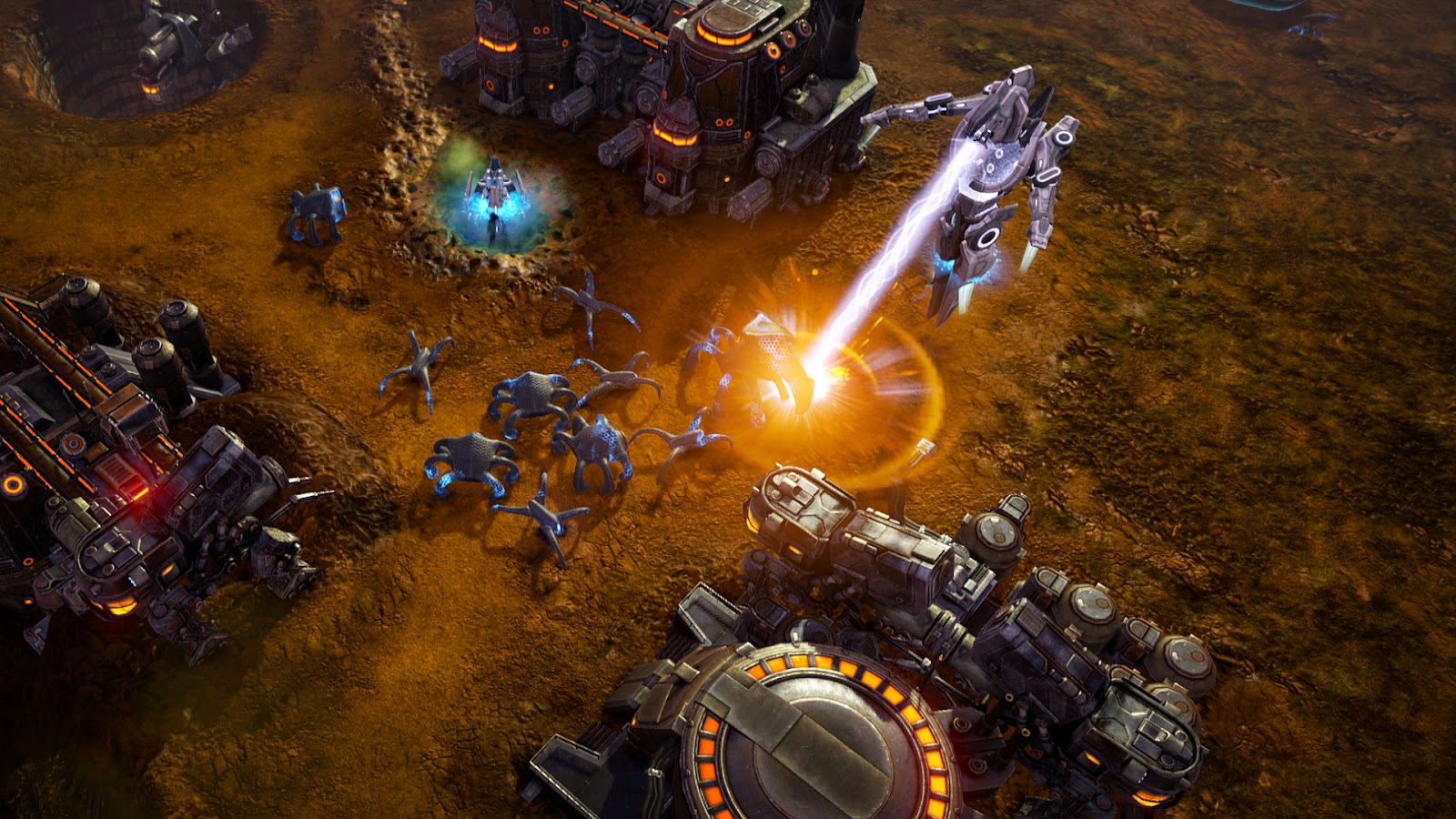 I am not particularly bothered by the “uncanny valley” but I am able to notice it and in Grey Goo I did not experience it at all, ever, in the briefings. The way that the lips sync and move, the small twitches in the cheeks, the reaction of the neck and throat while speaking … simply amazing. I could sit there and just stare as the Beta speak since it feels so real. The maps that you play on are positive full of lush wildlife, gorgeous water effects, and best of all? Wonderfully explosive and highly detailed units. Each unit model is detailed and easy to distinguish which is very important since some of the pitched battles can contain hundreds of units. In one of the early maps as the Beta I built dozens of the Commando units, basic infantry units that can be upgraded, and watched them get into skirmishes all over the map and it was glorious.

It truly brought back memories of the massive armies in Command & Conquer and Age of Empires; a welcome return from the highly limited unit caps of some of the more popular RTS games these days. Each of the different race’s units are well-modeled and a joy to zoom in on, especially when there are gorgeous explosions and small-arms fire going on all around them. Seriously, any developer looking to break into or maintain their hold on the RTS genre needs to look to Petroglyph and Grey Goo’s art direction as it is simply sublime. 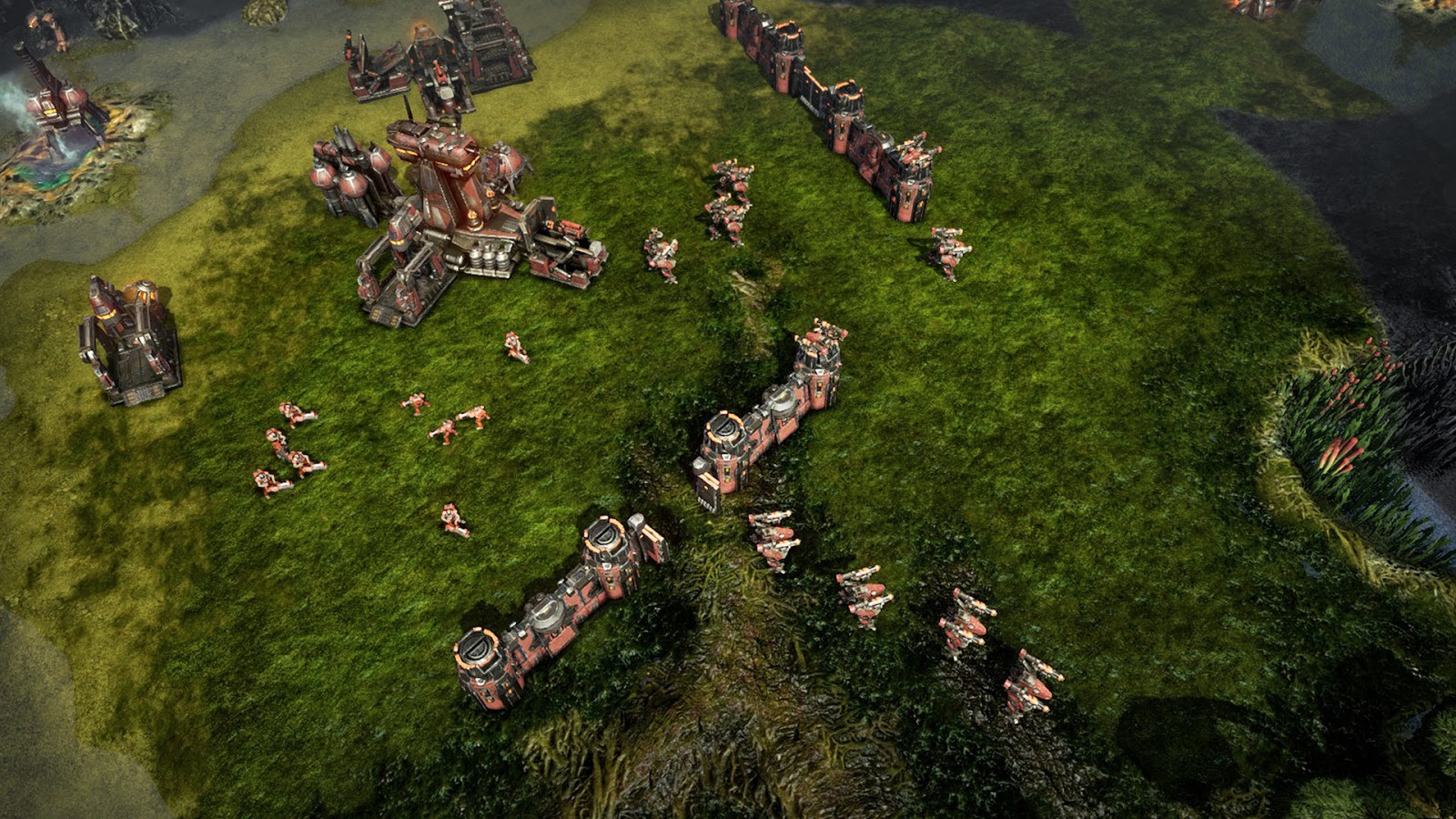 To go along with stunning visuals Grey Goo has some extremely high quality voice acting that is wrapped up neatly with a solid soundtrack. I could honestly sit around and listen to Beta conversations all day long, since the voice actors were sincere and earnest in expressing the different emotions that are perfectly displayed in the amazing FMV. Emotions such as fear or anger are believably spoken, to a point that I would oft-times forget I was playing a game as I was so enthralled by the audio that I thought I was watching a blockbuster CGI FMV movie. Even the units sound desperate and in pain as they begin taking enemy fire; I do not believe I have ever played a realtime strategy game with audio so deep and touching and it truly makes you want to keep your units alive. Something new and very welcome.

The music adequately depicts the state of affairs, whether that is in a briefing or you are in the middle of a mission, suitably changing pace when action happens though, not before the action happens. It is like the OST waits until there is contact between two enemies before going through and quickening in pace; I have long been trained by video games that when music increases in tempo to expect a battle, with the way that the music works in Grey Goo, that is not the case. A neat little feature. While the unit sound effects, such as deaths or the firing of weapons, are decent, when compared to the music and the voice acting they feel incredibly understated. It is not that they are bad, they just do not hold up as well as the other audio in the game; a small nitpick but one that is noticeable to an audiophile like me. 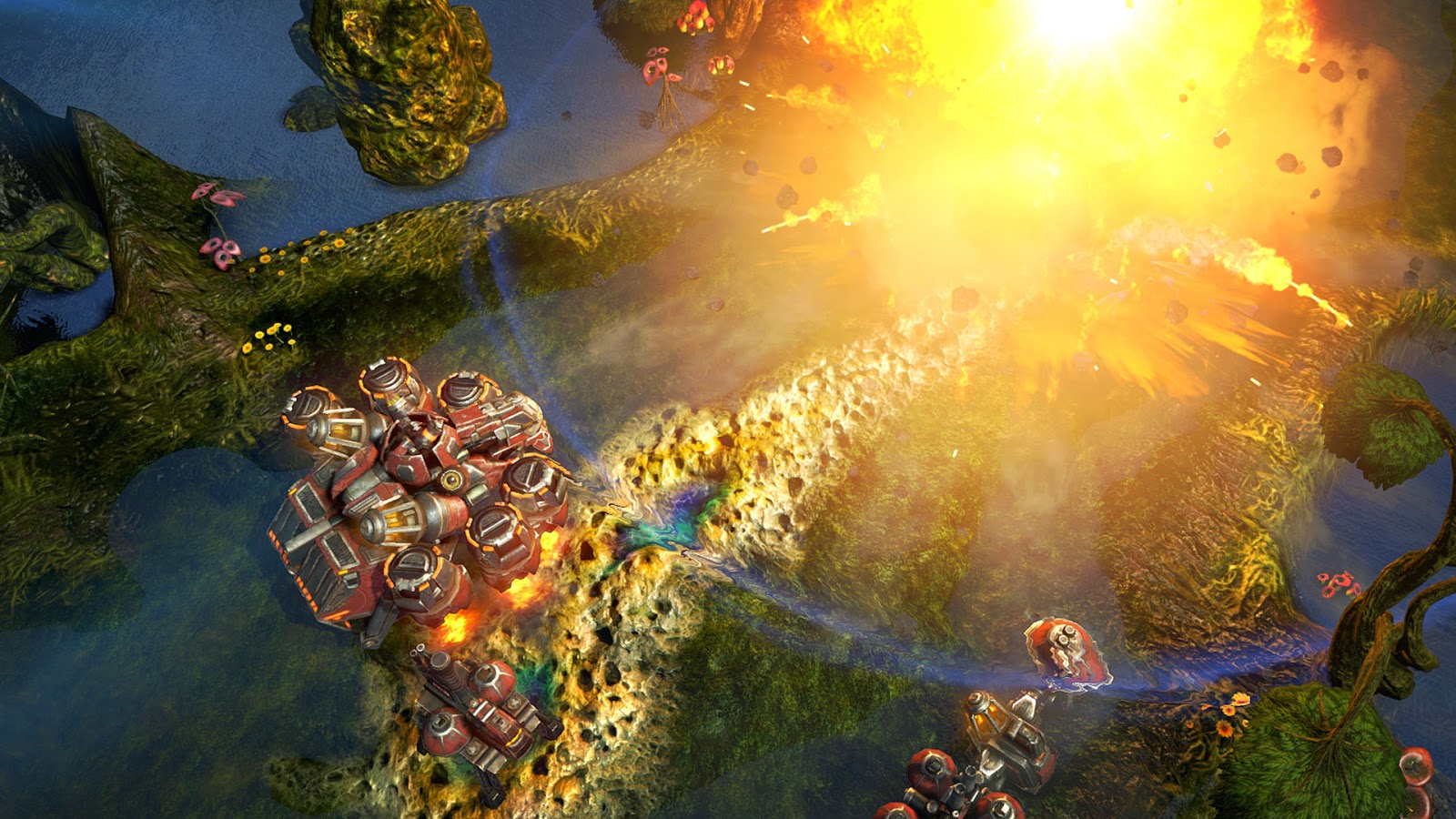 Grey Goo is a challenging game, if well balanced. The second or third mission into the Beta campaign took me 2 hours and 28 minutes to beat. Now I do not know if this is because I am simply a poor player (doubtful, since I am well practiced in RTS titles) or if it is because of the game being almost too smart, but I can say is that I was utterly stunned that when the mission ended I looked at the counter and it showed 2 hours 28 minutes.

Every single battle is a tense and exciting experience and Grey Goo literally grabs you by the scruff of the neck and does not let you go. It is both tantalizing and exhilarating and when you get through some of these challenging missions you sit back and take a deep breath and just say “Holy cow, give me more!” While the campaign is fairly run-of-the mill, some of the missions are challenging and new, but still fun. The environment, expert balancing, and sheer level of excellence that can be seen in each maps’ design are more than enough to keep you plugging through the many hours worth of single player fun. 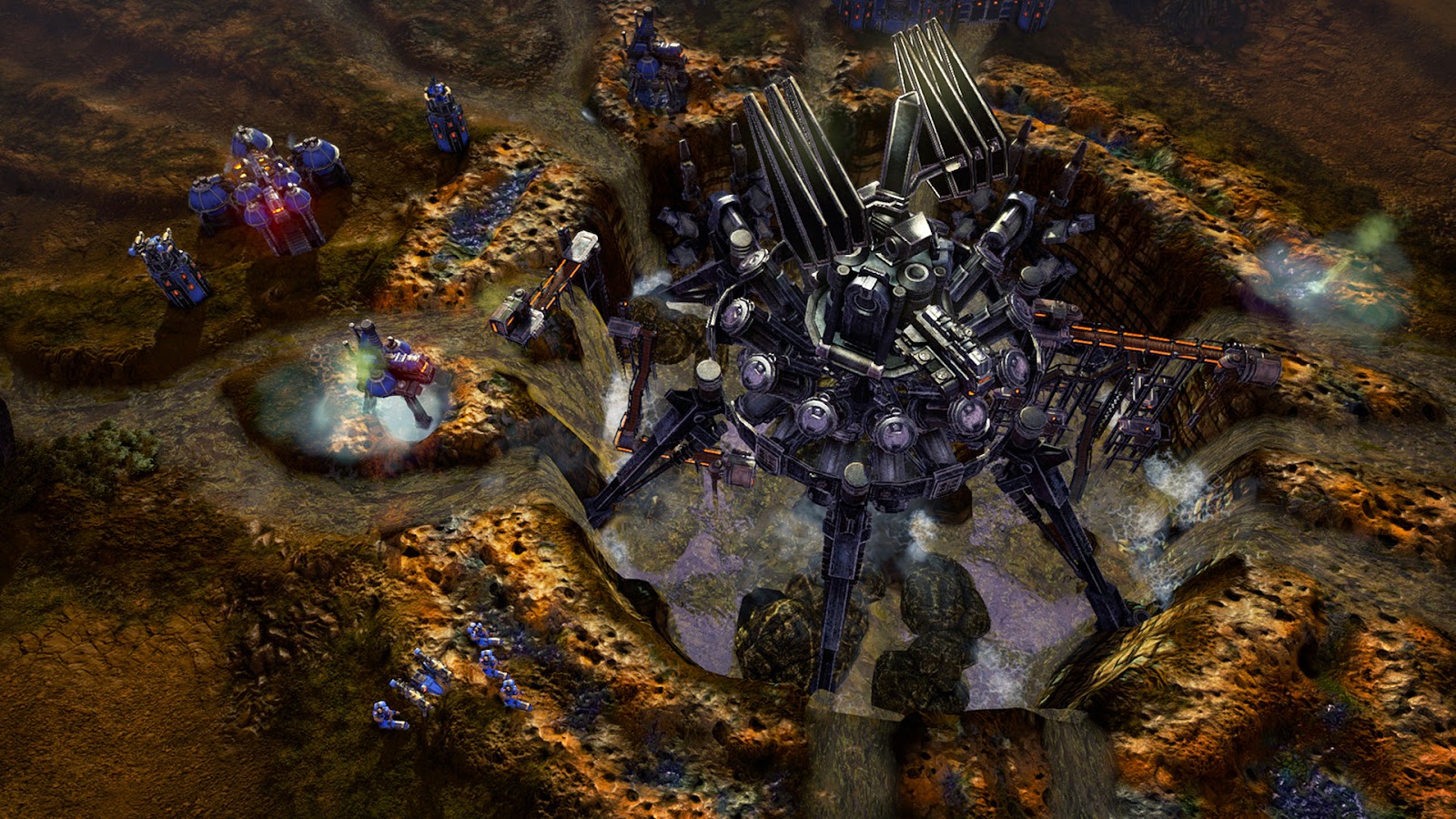 The skirmish mode is a blast too as I find myself just firing up some skirmishes to whittle away at the time while watching a grand spectacle of wicked explosions and flying machine parts. This is, by far, the most memorable single player campaign I have played since the Human campaign in Warcraft III: Reign of Chaos. Bravo, Petroglyph.

These days I am always a bit skeptical about new entries into the realtime genre; more often than not I am left with a lot to be desired in the titles. Petroglyph’s pedigree, being that they were created out of original Westwood Studios team members which was a studio that helped bring some of the best RTS games available, helped ease my concerns as I went into Grey Goo. Needless to say their experience has paid off, and paid off in a grand way. Grey Goo is an extremely intelligent, very well made, brilliantly designed, combination of shiny new and nostalgic goodness. While Starcraft may be the “go to” RTS game for many gamers world wide, those that are unwilling to try new things are missing out at what is, to date, the best game of 2015.