comments Share
You are reading
Hand of Fate – PS4 Review

Every now and again, a game comes along with a completely original premise. These are actually few and far between. Sometimes we see a new hook, or a clever twist or variation on what has come before, but it is not often you come across games anymore that actually feel completely new and different. The fascinating thing about Hand of Fate is that its parts are all inspired from other games, but the way they are molded together into a singular package creates something fresh and fun. 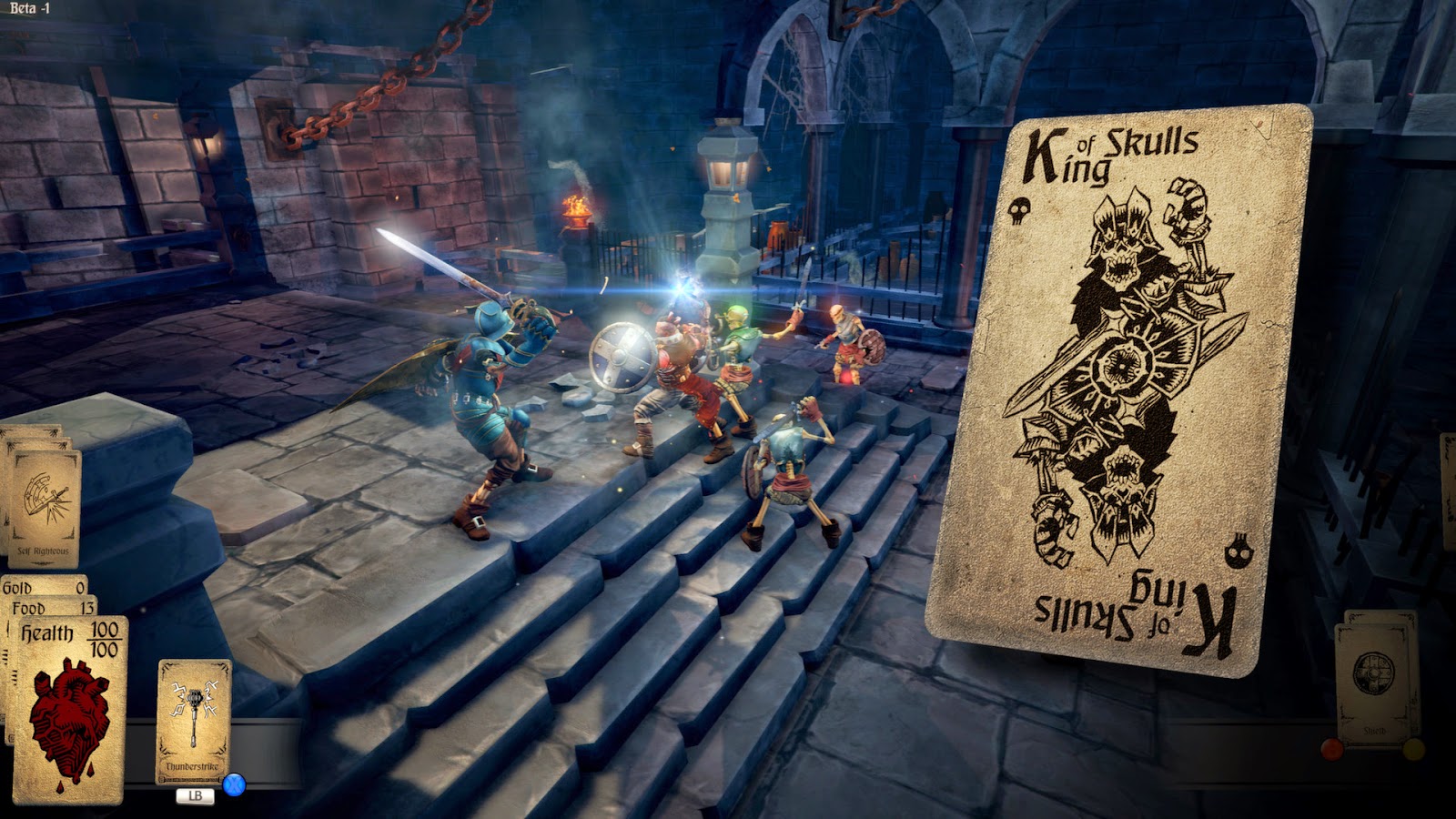 Hand of Fate is part card game, part action game and part RPG. If that sounds like a strange mix, that is because it is. I love seeing games blend genres, but sometimes it works better than others. Hand of Fate is one such example where the sum is certainly greater than its parts.

The first mechanic is in the card game itself. Decks are constructed by the player, including cards for equipment and encounters that they want included. The number of each type of card increases the further one dives into the game, making each level a little longer and slightly more challenging than the last. This deck is then presented to the card master and narrator sitting across from you at the table. He adds a handful of his own cards to the mix – usually a combination of boons and traps. These cards are then shuffled up and dealt face down on the table in different patterns.

These face down cards serve as steps on your journey. When they are in a singular row, the cards simply have to be dealt with one at a time in that order. When they are adjacent to one another in multiples, they create paths. Each card you step on uses up one piece of your food and helps you regain a small amount of health (unless you run out of food, in which case each step costs you health). Managing these resources along with your gold and equipment is key to success. As soon as you move to a new card, it is turned over and the event plays out. 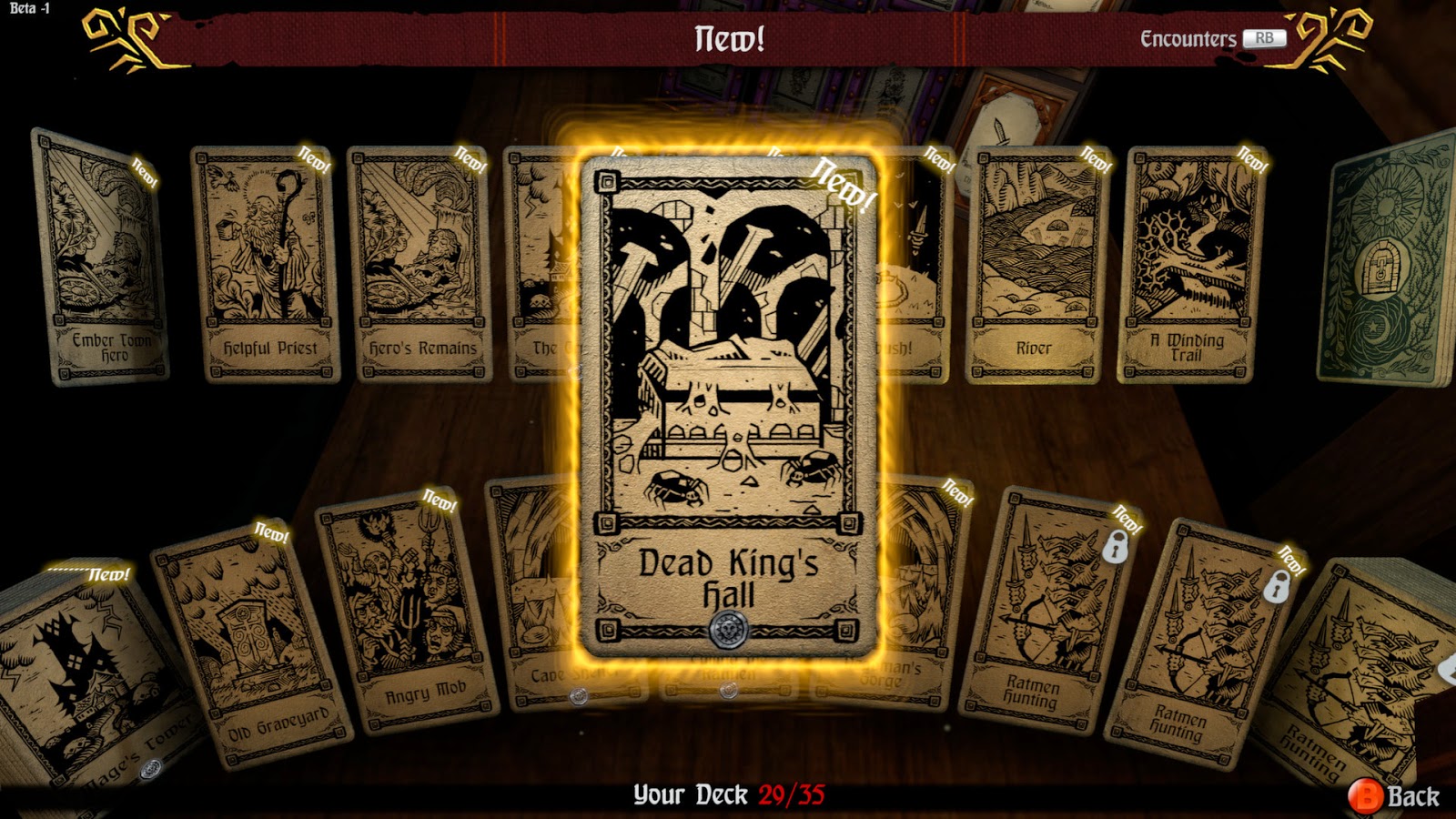 These events make up the meat of the game. Sometimes they are simply boons such as a maiden who will give you your choice of gold, food or greater maximum health. Often they present games of chance. Perhaps an angry mob will demand you give them half of your food stock. You can choose to do so and suffer no greater consequences, or tell them to bugger off and play a game of chance where you pick one of four cards. Similarly you might draw a card that says your character spies a glint of something reflective in a canyon. Do you crawl down and try to retrieve it? If so, again you choose one of four cards. These cards are differing combinations of Huge Success, Success, Failure, Huge Failure. These can range from minor to major benefits and harms depending on the card and are often the most important swings in momentum in any given level – especially the failures. The difficulty here feels better curved than it was back when I previewed the title on PC several months ago, but it can still prove frustrating to have your best plans negated by two or three bouts of really bad, unavoidable luck.

You do not gain experience or levels, but acquiring gold, increased health, new weapons and armor and the story elements certainly make Hand of Fate an RPG at its heart. For me the biggest treat is unsealing a card. New cards usually have a condition to be met to unseal them. Maybe it is besting a certain creature, or navigating a maze of traps or perhaps just having good fortune on two or three luck of the draws in a row (these are the most frustrating since they are all pure luck). Once you do, they unlock a new card that you can later add to your deck. Some of these chain together beautifully to serve as quest lines that lead to bigger and better challenges and rewards.

This exploration only heightens the sense of risk versus reward. I am a completionist by nature. This is how I wound up spending over 150 hours completing Dragon Age Inquisition.That sense of exploration is tempered by the constant management of resources. A wagon or a staircase may take you to a new section of the level, and you are not going back afterwards. If you see two or three cards yet to be turned over, do you risk losing precious food or life in exchange for the potential rewards, or push on towards the end of the level? The end of each level culminates in a boss fight that is usually quite challenging. There are only a handful of core enemy types, from magic users to undead to barbarians, and each has its own distinctive style of combat. 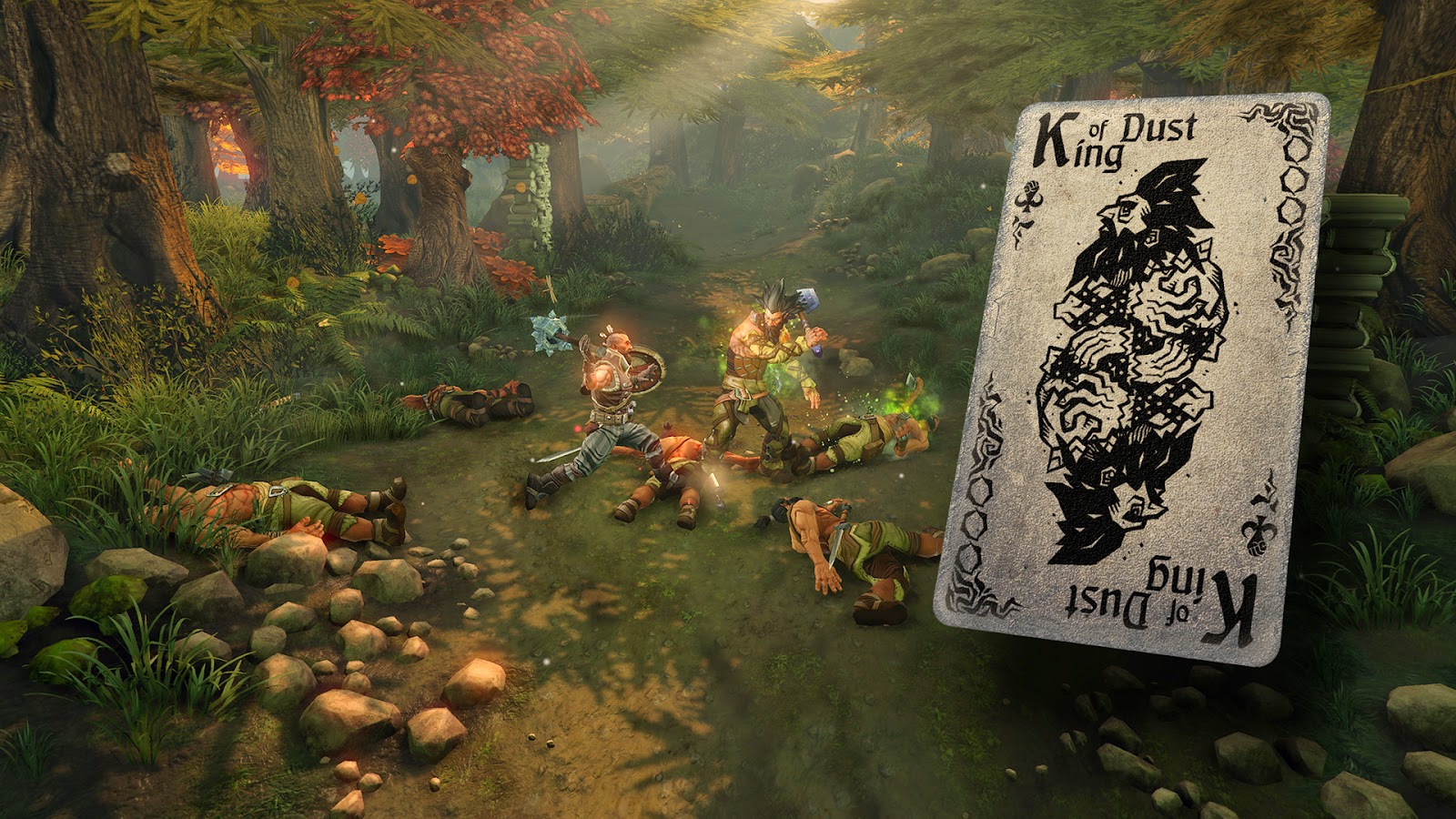 The combat itself heavily reminds me of the Batman Arkham games or Middle-earth: Shadow of Mordor. It is very combo heavy with timed counter attacks and usually pits you against multiple ranged and melee enemies at one time. The visuals here are appropriately themed and generally pleasant to look at, but a little herky-jerky at times with strange chaining animations and a hint of lag now and then when things get crazy. It is not quite as satisfying as those aforementioned titles, but here the combat comes in short bursts and suits the flow of the game as a card might drop you into an arena with a handful of enemies, and once they are defeated, you get to collect your rewards.

As one would expect, death comes to those who lose all of their health. Gold, found equipment and food do not carry over from one level to another. They are cards shuffled into your deck and only used if found or purchased during your trek through a particular level. As such, should your adventure end in demise (and it will in the later levels, which can be very hard), you might not have much to show for it. This is where the exploration really comes into play. I was regularly building my decks not to have the easiest or best events, but ones I had not completed. That way even if I lost in my attempt to beat the level, I still felt like I was making progress if I had unlocked at least one card seal on my failed attempt.

In truth the presentation values are a bit of a mixed bag. I like the narrator, but most of the sound effects and music are appropriate but somewhat forgettable. Also, for visuals that are merely decent and far from technical marvels, it feels like Hand of Fate is poorly optimized in places. Load screens before a battle takes place can be somewhat slow, and that is on a hard drive that has a faster speed to it than the default that the PS4 ships with. Also at the start of each level, the dealer would shuffle and deal out the level in somewhat slow fashion. I found myself pressing buttons hoping to speed through/skip the process, but perhaps there is an actual reason for this such as the game loading things in the background. Still, if you are already frustrated from having died in said level several times, the last thing you really want to do is wait those extra few minutes while the animations go through the motions. 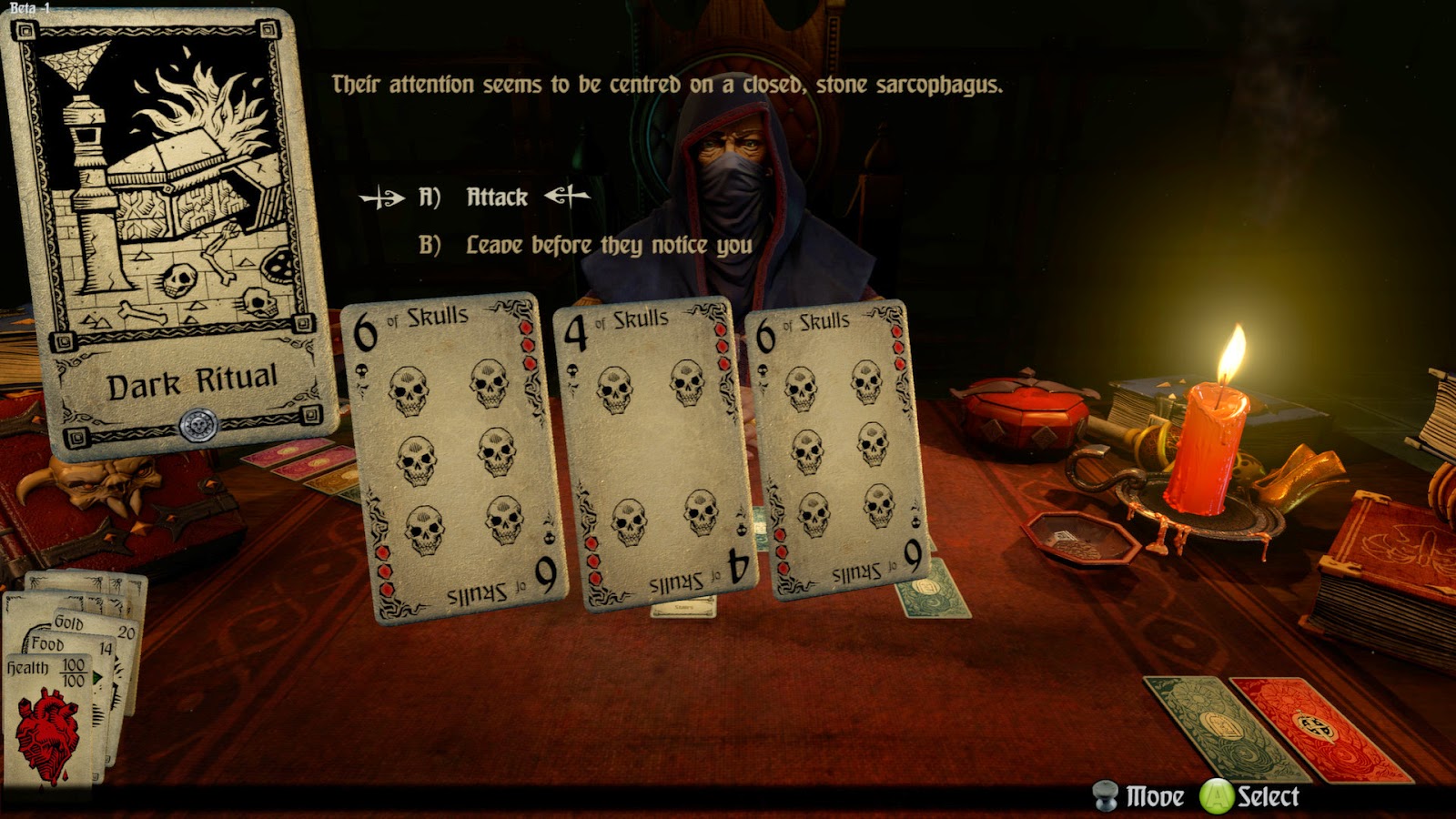 Also a related annoying bug crept up in my impatience to start the next level, when I would hit the X button a few times trying to speed things along. Three times in my first eight levels of play, the dealer would look and sound like he was ready to start the next level, but instead the screen would simply sit there. I had no options to edit my deck or start the level, as none of the face or shoulder buttons would do anything. I could hit Options to bring up the settings menu or resume the game, but that was it. In all three instances where Hand of Fate froze here, I had to back out to the system menu, close the application and start again. Thankfully in all three scenarios my progress from beating the prior level had been saved, so it was more of an inconvenience than anything, but reinforced my feeling that maybe the code was not as optimized as I would have liked.

Hand of Fate looks like a tabletop game brought to life. My son watched me play and remarked that it should be made into some sort of a two or three player card game for tabletop gaming. We have been playing a lot of board games lately, so I can see why he would jump to that particular conclusion, and while it would take some effort to tweak things (essentially combat would have to be changed over – maybe to a mini-card game in and of itself or a game of dice), but I agree that it could certainly work.

Hand of Fate takes some chances with seemingly disparate components that come together in a nice little package that defies any singular genre description and stands apart as something different yet fun. Those who dislike games of heavy chance might be turned off by some of the luck-heavy mechanics, which did indeed test my patience at times, but the exploration and deck building systems are both excellent hooks that kept me coming back for more.