The Hyperdimension titles stormed our shores about 5 years ago, bringing Hyperdimension Neptunia to the PlayStation 3 back in 2010/2011 and we here at Chalgyr’s Game Room have long been fans of the series. Eschewing the generally heavy themes that one finds in most JRPG games, the Hyperdimension games have always walked along the lines of comically absurd and intriguingly deep. Taking place in a virtual world called “Gamindustri” during the “Console War” where Console Patron Units (aka CPUs) are fighting for supremacy. The four primary CPUs are Neptune (The Purple Heart) the CPU of Planeptune who symbolizes a non-existent next-generation Sega console; there is Blanc (The White Heart) the CPU of Lowee, which as you can guess by the name, represents Nintendo’s Wii home console. 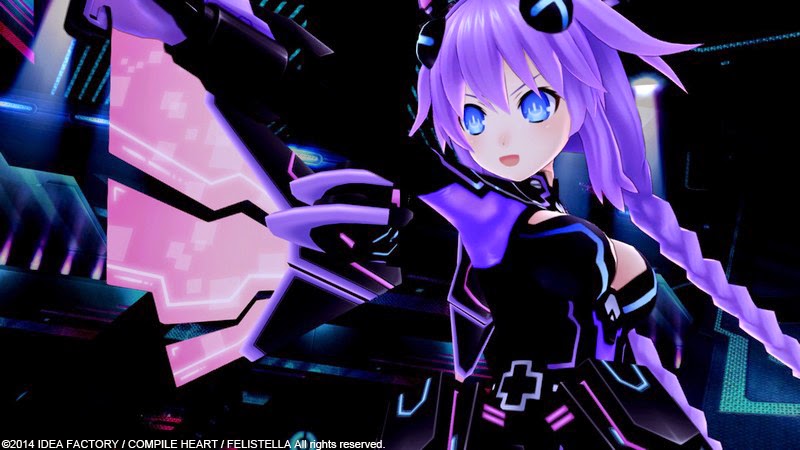 There is my personal favorite, Vert (The Green Heart) the CPU of Leanbox and a digital representation of Microsoft’s Xbox, and finally there is Noire, The Black Heart, the CPU of Lastation, which symbolizes the ever popular PlayStation console. With a concept such as the Console Wars and four characters based on the biggest consoles of the real-world Console Wars, there are plenty of comical jabs that take place throughout the series. While Hyperdimension Neptunia was originally released for the PlayStation 3 to disastrous reviews, Re;Birth1 was released as a completely updated and refreshed title for the PlayStation Vita back in August of 2014 to high praise. Six months later Idea Factory has released Re;Birth1 for the PC via Steam; does this tongue-in-cheek JRPG transition well to the home computer?

When Re;Birth1 was initially released for the PlayStation Vita it received an improvement to its graphics, improving texture quality, framerate, and a few other minor details. Given that this is a straight port to the PC, the graphics look quite nice with well made, if scantily clad models that are animated well. The cutscenes are speedy and attractive, if a little flashy at times, as they can become very busy, very quick. Running at 1920×1080 on my PC, Re;Birth1 rarely, if ever, dropped below 30 FPS so the optimization that went into the first remake is still working and as excellent as the re-release from August. While it may have been just a port, I think I would have liked to see a few things tweaked a little. 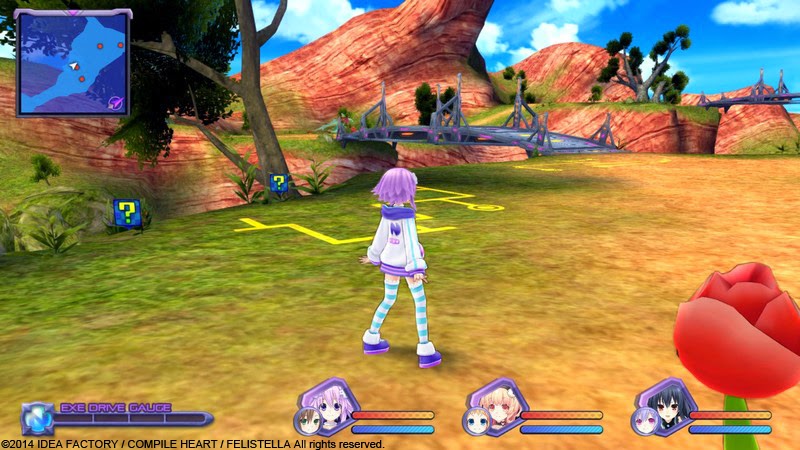 The different environments that you explore are nice looking but empty even though the different areas are fairly linear at times, they are certainly wide open but the main paths are fairly devoid of any character. Were this being played on the Vita I do not think I would have thought twice about it, but given the power and scalability of the PC platform, adding more doodads and terrain characteristics for the PC platform would have been preferred. When you are in battle the arenas are flat, nondescript, and have a very basic background that looks good but brings no variation to the board. That is not to say the environments are not nice looking, nor that the battle areas are poor, they just feel a bit empty at times and I think a little work spent adding some extra flair to the various areas could have been nice. One thing that really could not get enough of though was the animations and effects for your skills; they are simply wonderful to watch.

Bright colors and explosive effects added to well animated and gorgeously drawn models are about all that you will be watching in battle so the lack of character or variation to the various battle screens is minimal, it is just that running around the environments you visit seems a little bland at times. However, it is just the explorable parts of the maps that are rather dull, but the backgrounds? There are some amazingly beautiful vistas that are shown as the backgrounds of the various areas; more often than not I found myself standing an looking into the distance thinking “Man, I wish I could go there.” Nonetheless, Re;Birth1 is an attractive game with some excellent art styles that will certainly appeal to fans of anime or manga. 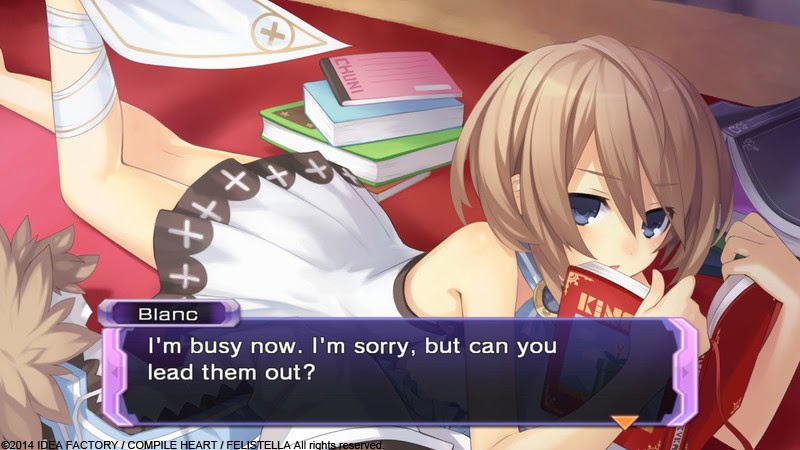 As most of you may be aware by now, voice acting is something that I tend to be a little more critical about and with Hyperdimension Neptunia Re;Birth1 I am somewhat unsure of how I feel about it. At times I find it enjoyable and interesting, providing the right emotions at the right times but at other times the high-pitched almost whiny voices seemed to grate on me. For those out there that have seen the much-lauded Puella Magi Madoka Magica anime with the English dub may understand the annoyances I have with the voices (Madoka’s English Dub has some of the whiniest, most annoying voices I have ever seen in an anime) of Re;Birth1. Reflecting on its voice acting, the issues I may have is that the seiyuu/voice actors are simply trying too hard to be campy or comedic, while completely missing the mark.

For example, Compa a companion you meet in the first few minutes of the game seems to be trying far too hard to be air-headed, innocent, and silly all at once and it can become absolutely grating. Fortunately though, characters like Vert and Blanc make up for the lack of (what I believe is) experience for some of the other actors, as they are near-perfect in their execution of the script. The original Hyperdimension Neptunia title that was released for the PlayStation 3 some years ago was lambasted for its crummy soundtrack and while Re;Birth1’s soundtrack has certainly improved over the original’s, it is still quite busy and can be extremely distracting at times. I found myself turning down the music volume to a bare whisper just so I could focus more on the excellent ambient / sound effects and the so-so voice acting. The exceptions to the fairly annoying tracks are the music in the cutscenes, the main menu, and the overworld map; those tracks just seemed to ‘fit’ while others (like the battle music) just grated on my nerves. Fortunately turning the music down to about 20% volume put it far enough out of my mind to be not distracting while leaving it on to add some level of variation to break up the silence.

Re;Birth1 follows its roots when it comes to gameplay. With overworld travel being a simple map where you select your destination and all of the action takes place at predetermined points. It is a fairly popular style of overworld maps, as it can be found in other franchises such as the Atelier series or the quite enjoyable PlayStation 3 titles Fairy Fencer F and Ar Tonelico: Ode to an Unborn Star. When you visit cities/settlements you will have a list of various points (some unlocking as you delve deeper into the game) that you can visit that will show a small “event” symbol that will identify when something is going to happen to help push along the story.

Contrary to the norm for most JRPG games though, grinding is not a necessity in Re;Birth1. If you wish, you can simply move from plot point to plot point (and there are quite a few *plot* points in this title, so keep that in mind if you decide to fire up Steam while you are on lunch at work) without spending the time to grind your characters to the max and you would still be able to handily beat the game. However, in the spirit of classic JRPG games it is near impossible to not revisit areas just to grind; given that I am from an older generation of gamers, grinding is not only a necessity, but it is now ingrained into my sense of gaming so it is something that sort of must be done. Combat is actually quite fun after having been redone from the original Neptunia title to more match the far superior turn-based tactical combat found in Hyperdimension Neptunia V. While slightly different than classic Final Fantasy titled, I often felt a slight wave of nostalgia come over me that hearkened back to the days of Chrono Trigger. 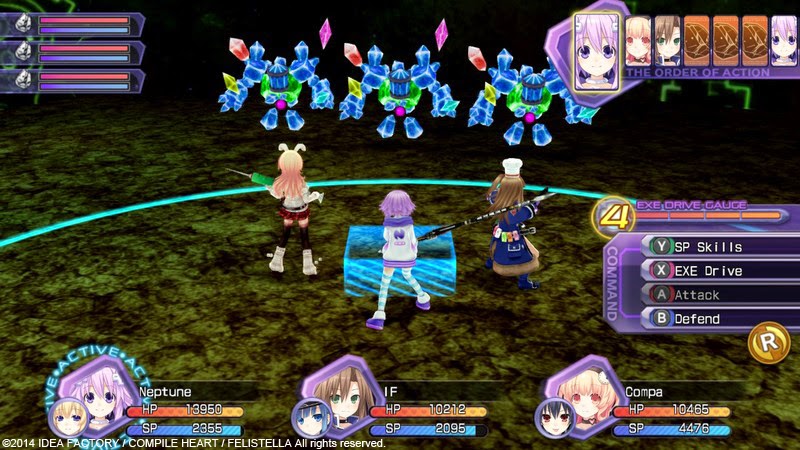 Combat is initiated by running up to enemies and whacking them with your staff/weapon which then awards you with slight bonuses (assuming you hit them whilst they are unaware). One thing I did find a bit annoying is that the enemies respawn quick, and I mean very quick. I could walk into a small area and see three enemies, attack one, then the other and by the time the second relatively short fight is over, the enemies would all be respawned. The total time passed would be about 2 to 3 minutes. While this is great for grinding there comes a time when you simply want to get through a dungeon but with enemies literally respawning every few moments it can be very difficult to make your way through an area. Fortunately the pacing for Re;Birth1 is excellent and helps pull you through the story without it feeling like it has to tug you along, nor is it paced so fast that you feel like you are missing content.

Hyperdimension Neptunia Re;Birth1 is a straight port from the PlayStation Vita to the PC (which was original a remake of the original Hyperdimension Neptunia which had an extremely rough start here in the States) and is a worthy entry into the ever-evolving PC JRPG genre. Attractive graphics, great ‘plot’ and well animated models mix well with a story that pulls you along at a comfortable pace, though oft-grating voice acting and a sub-par soundtrack still holds Re;Birth1 back from being categorized as an excellent “must have” title. With a little more attention paid to the various environments, to liven them up and give them a bit more character, and some tweaked voice actors as well as an overhaul of a handful of the tracks in the OST, Hyperdimension Neptunia Re;Birth1 could be a whole new game. As it stands it is still a wonderful title with plenty of hilarious scenes that make a mockery of the longstanding, real life “Console Wars” while still providing a relatively interesting story. If anything Re;Birth1 is well worth the play through just to see the story play out, given its concept would likely touch a large number of gamers.