Resident Evil was originally released in 1996 for the original PlayStation and then ported over to the Sega Saturn; that is where I was first introduced to the series. In ’96/’97 I remember picking up Resident Evil for the Sega Saturn (along with Daytona USA and Dark Savior around that same time) and being unsure about the game; I did not know much about it other than it was a fairly new take on 3rd person action. I remember firing it up for the first time and watching the opening movie and simply marveling at the quality of the video. Once I got in-game I was not entirely sure what to do so I wandered throughout the mansion until I happened upon my first zombie. It scared the proverbial crap out of me and I ended up putting Resident Evil down to play some Aladdin on the Super Nintendo. I have never been one for scary games (I still refuse to touch a Silent Hill game) and boy, was I in for a trip with Resident Evil. 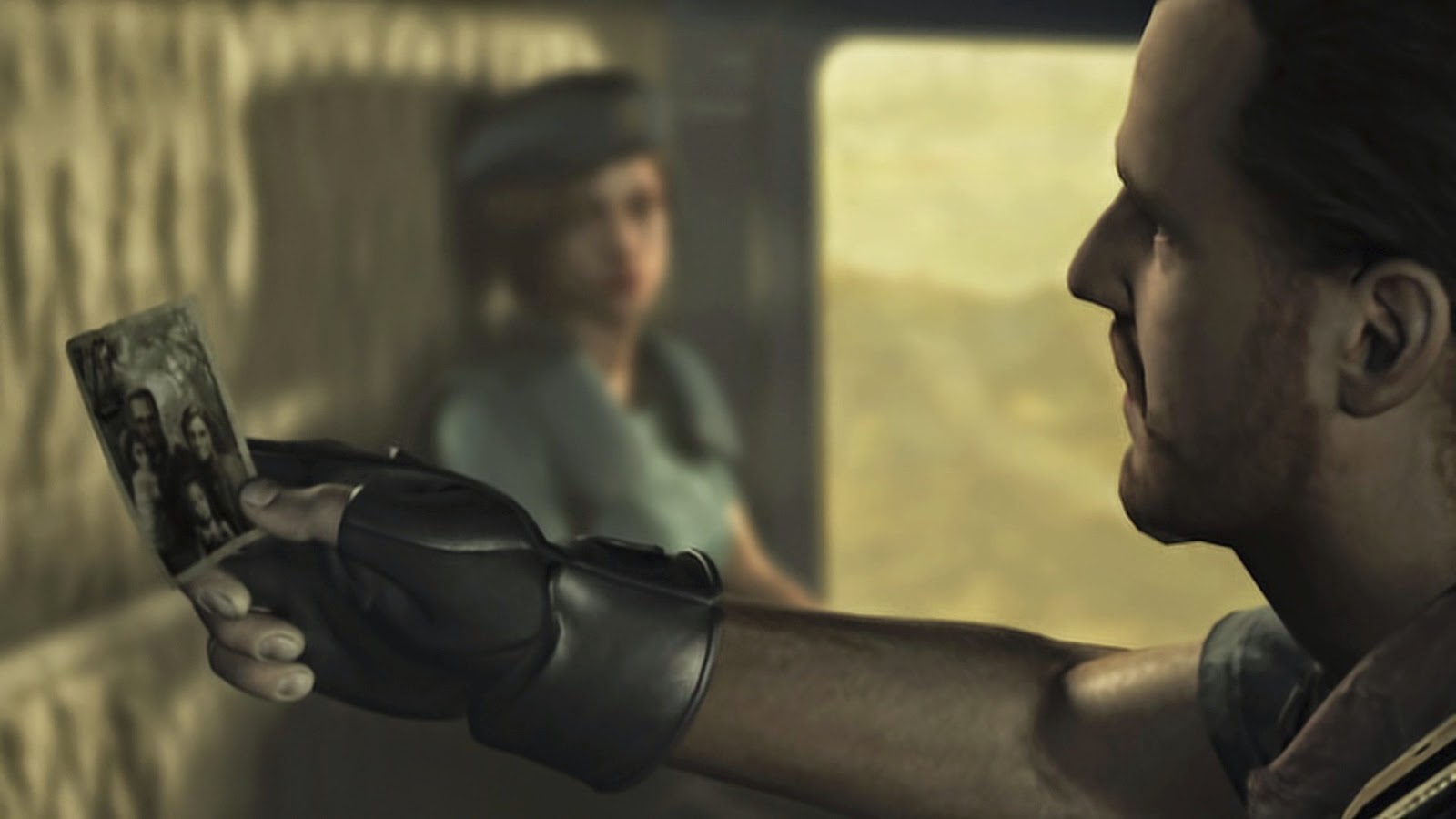 Over the course of the following year I ended up playing it in a piecemeal fashion until I became enamored with 1997’s biggest release, Final Fantasy VII. Once Final Fantasy VII came out I had not touched the game, or franchise, again until Resident Evil 5 was released. With the current trend of re-releasing and remastering old games to bank in on that nostalgic factor, it was only a matter of time until someone remastered the original zombie survival game, Resident Evil. Fast-forward nearly 20 years since its original release and 12 years since its rerelease for the GameCube, Resident Evil has received the inevitable makeover in the Resident Evil Remastered released in January 2015; does the original zombie survival game hold its own on this new generation of hardware?

Resident Evil on the Xbox One looks mostly fantastic running at 1920×1080 / 30FPS as the models are all improved and contain gorgeous textures. The various outfits that you can choose for either Jill Valentine or Chris Redfield are very well designed and true to their origins, though I prefer Jill’s Biohazard Security Assessment Alliance, or BSAA outfit over her S.T.A.R.S outfit. Chris’s outfits were equally fine, though again I preferred the look of the BSAA outfit as in both cases, they simply felt a little more tactical and fitting for a paramilitary group. Jill and Chris were not the only ones to receive a high resolution makeover as the various characters, like Wesker, have also received the same treatment with some of the creepies and nasties that you will encounter looking appropriately terrible. On top of the new look of the various models the animations for each are far smoother and higher quality than their original jerky counterparts. Zombies still shuffle along in a haphazard manner with their arms outstretched like some 70’s horror movie (which is great), but they are smoother in their movements. 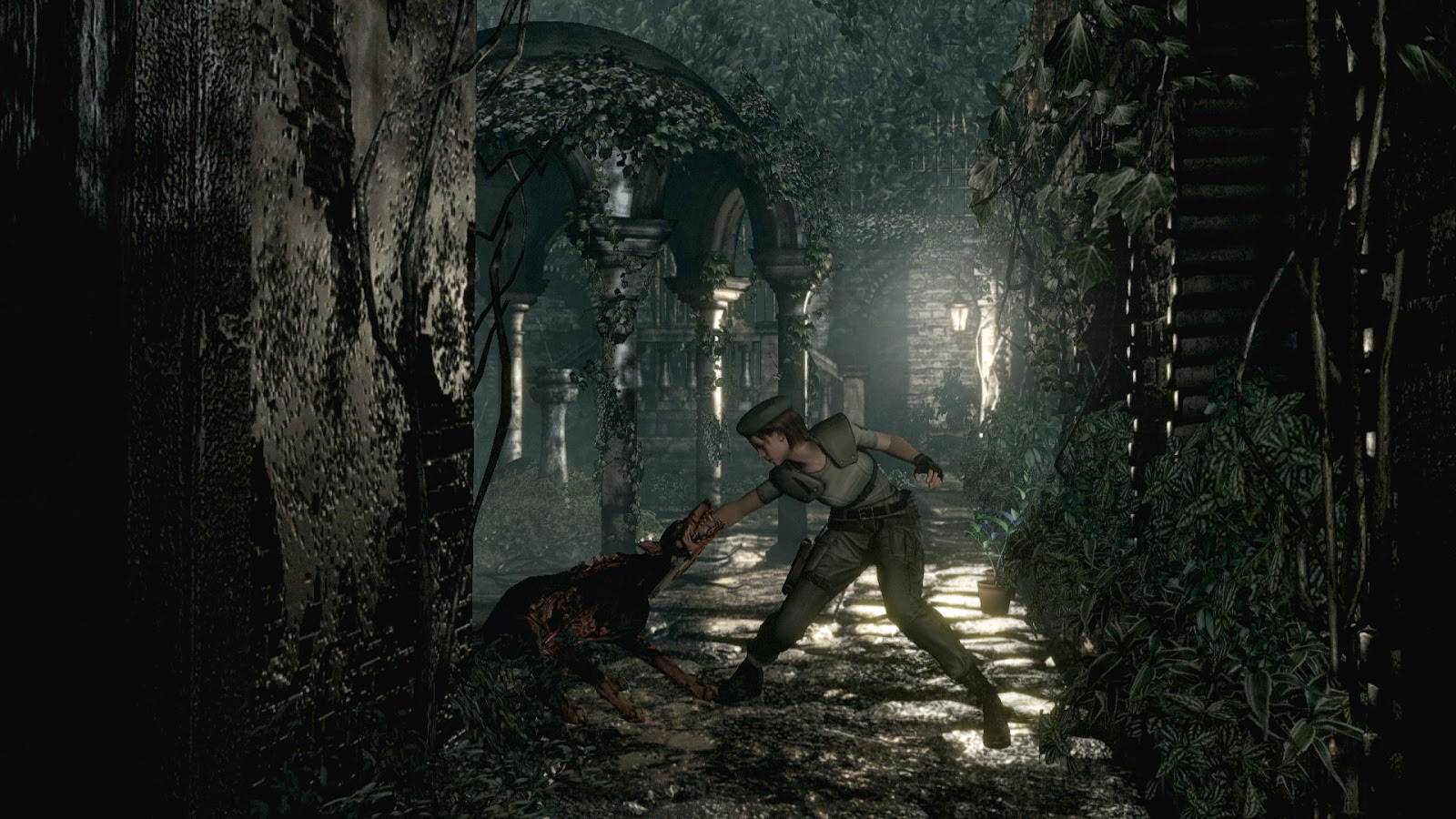 One thing I that felt was not necessarily needed was that certain assets of Jill’s have been, shall we say “tweaked” to respond to movement. The amount of free-moving jiggles in her modeling was truly not necessary, so I do not really know why it was added, especially given the fact that Jill Valentine has always been more of a go-getting and aggressive woman, and less of a sex symbol. Not a terrible change, just confusing (no different that Lightning’s bodily “improvements” in Lightning Returns: Final Fantasy XIII, which was also unneeded). Where there was extra attention paid to models throughout the game I do feel that some of the particular areas seemed quite low-resolution next to the models; for instance if you move to the right side of the main entrance, the wall and door textures just do not match up to the quality of the models. It makes things feel a bit broken, however it does not happen in every location, so it may simply be due to the camera angle of the location. I did find that this graphical oddity is repeated in other various locations, such as stairs; walking up stairs shows a smooth animation where Jill (as I played as her) properly steps on the step to move up, though in some areas she would simply slide down the steps like she was walking down a ramp (there is currently a GIF that is floating around some of the other press outlets that shows a sample of what I mean, though I did not experience that particular issue on those steps). Overall the improved framerate and higher resolution textures are a welcome addition to a long-loved franchise.

I have always felt that one of the primary reasons that the early Resident Evil series were so successful was because of some of the most impressive sound designs found in a video game. Suitably ominous music that floats along quietly in the background ties in perfectly with ambient effects such as the crack of thunder or the creaking of the old wooden house are combined brilliantly with an oft-times oppressive near-silence. The tense audio will subliminally keep you on the edge of your seat and just outside of your comfort zone so when you go through and do happen upon something relatively terrible, its effect is multiplied ten-fold. 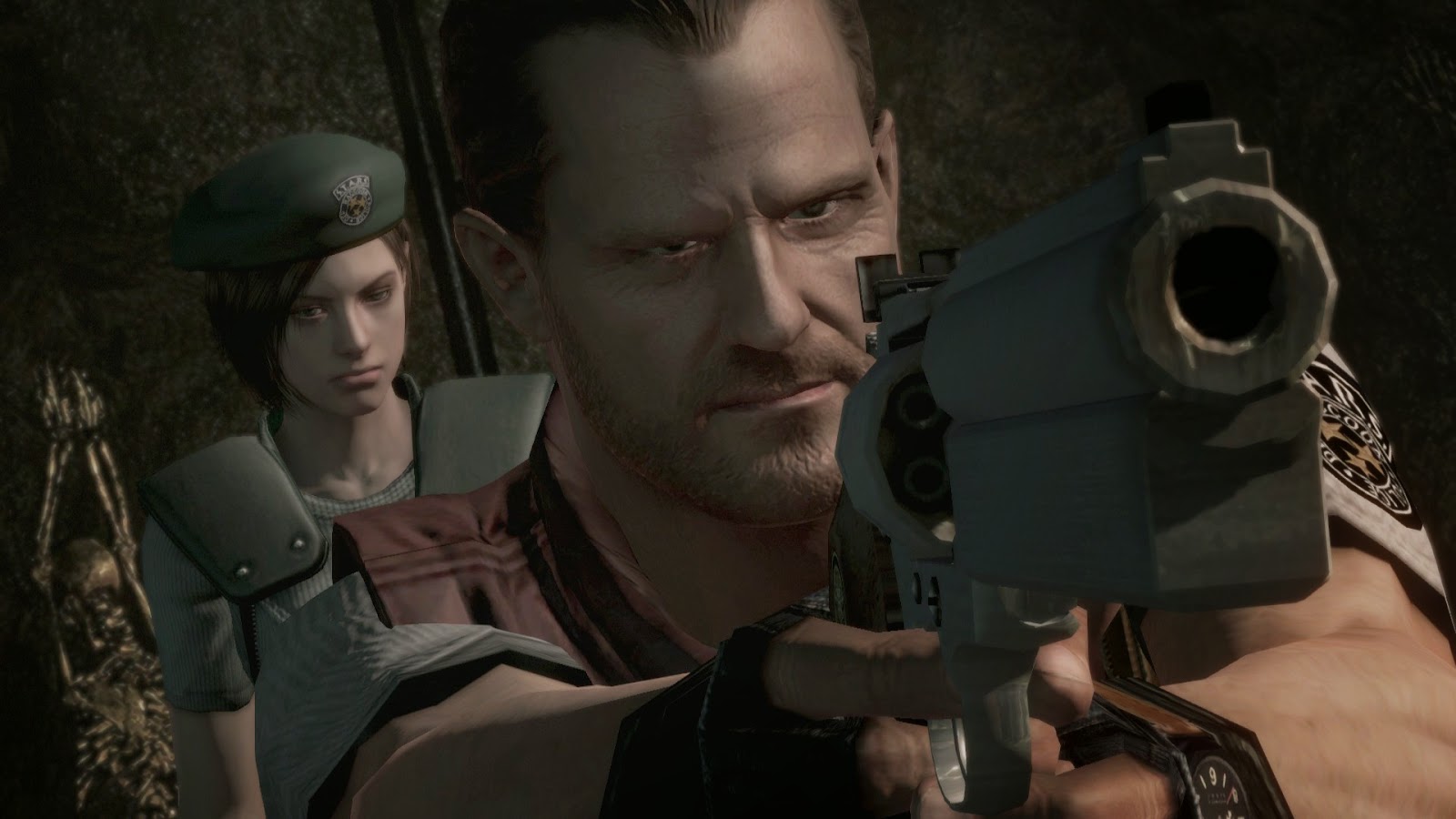 With such brilliant sound design one would think that providing quality voice acting would be a cinch but with Resident Evil that is not the case. Put straight, the voice acting is abysmal. Worse than abysmal. I would rather have the voices turned off and subtitles turned on while playing since good lord the acting is flat. Fortunately the background audio, weapon sounds, growls of the nasties, and the overall tone of ambient audio is so good that I can forgive the poor performance; honestly the sound engineers for Resident Evil should win as many awards as possible and Hollywood should take a few lessens from them. They are superb.

Given that it has been nearly 20 years since the original was released and a lot has changed, it was fairly difficult to adjust to the control scheme used in Resident Evil. When you combine an odd and inefficient controller layout with the constrained camera views, combat can become a bit convoluted at times. Likely the issue is less to do with Resident Evil’s control scheme itself and more to do with how other 3rd person titles have evolved. It really goes to show how much we take a free-wheeling camera and the ability to freely aim over the shoulder for granted. When you take away those freedoms you really do, at times, feel stuck which when added in with the downright ominous ambient audio makes for some extremely tense gameplay. 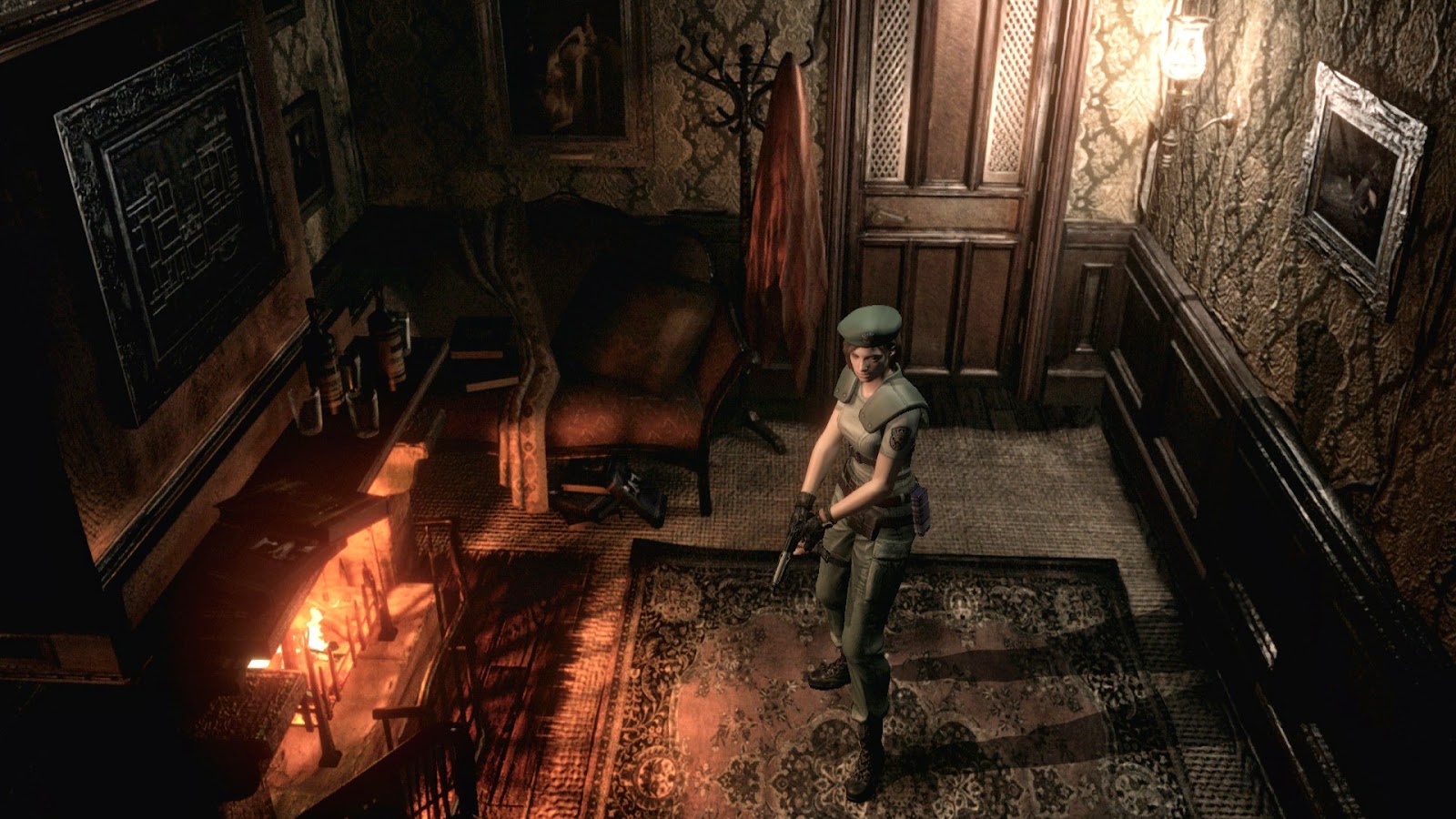 I do not know if I have ever played a game where a combination of controls and audio have been so successful in immersing the gamer into the game. Given that Resident Evil is a survival horror title that is tailored to a different generation of gamers, some newcomers may be utterly destroyed by concepts such as ammo conservation; I know that I was, at times, a little too “free” with my ammo and had to restart some games due to simply not having the ammo. Few games these days are as sparse with its ammo which can lead to some frustrating points if you are not absolutely 100% careful with your inventory.

By now anyone that has an interest in the survival horror genre should have played the Resident Evil series, but for the rare newcomer or those that were not around for the original’s release, Resident Evil Remastered is a wonderful trip. While Resident Evil was inspired by Alone in the Dark, an excellent horror title on its own, the latest remaster brings everything that we loved about the series from 20 years ago and gives it a wonderful face lift and puts it into the hands of a new generation of gamers. While some design choices are questionable in the latest release, Resident Evil Remastered is an excellent looking game that transitions well onto the latest generation of consoles. Being able to relive some of the terror and tension of my teens on a large screen TV in a dimly lit room is a blast and less a trip down nostalgia lane and more a rediscovering of the singular genre that can make me hide behind a pillow.