TagsArcane Wonders, Sheriff of Nottingham, Tabletop and Board Games Review

Many board games put you in roles where you are competing with other players, but in a very indirect fashion. These tend to have minimal interactions that impede the progress of others. Some games turn the tables and you only progress by directly hindering an opponent. Sheriff of Nottingham is closer to the latter, but with a few unique twists, this game of bluffing and roleplay stands out for its simple design but addicting gameplay. 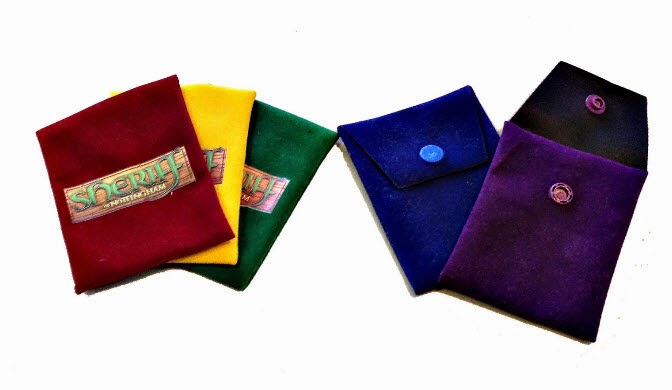 There are only a handful of components to Sheriff of Nottingham, which may very well be one of the easiest games to learn that I have looked at in the last several months. The instructions are incredibly clear with examples for almost every situation. Kudos to also offering some variant directions to help spice things up if needed, including offering a timer app for those who want to add just a bit more pressure to the game.

Made for three to five players, the premise is built around drawing cards and having one person at the table be the titular sheriff. The non-sheriff players then have to decide which cards they want to move from their hand to the market. To make the trip, those cards must be put into small sacks which are then snapped shut. The primary mechanic here is honesty versus bluffing. You get to put any number of cards from from one to five out of your hand of six into the sack. You then need to tell the sheriff what is in there. Of course, you need not tell him the truth.

You can say that you have three pieces of cheese, or four chickens or five apples. These are all legal items. However, you cannot mix and match those numbers – at least verbally. You cannot say that you have two apples, a wedge of cheese and a rooster. You need to stick to one item. This encourages people who want to play it safe to get four or five of the same card. However, you can mix and match or include what is considered contraband instead. These cards include more precious wares such as crossbows and silk. You never admit to these of course. I had one hand where all five pieces in the sack were contraband, but I told that turn’s sheriff that I had five apples instead.

Once all of the players have declared what they are sending to market, the onus is on the sheriff to try and guess who is being honest, and which players are attempting to pull a fast one on him. Each card has two values on it. The top right is the card’s actual value. A chicken is worth four, an apple is worth two and a crossbow might be worth nine. In the lower right corner is a penalty value. The first two items might have a score of two and the crossbow might carry a penalty of four. 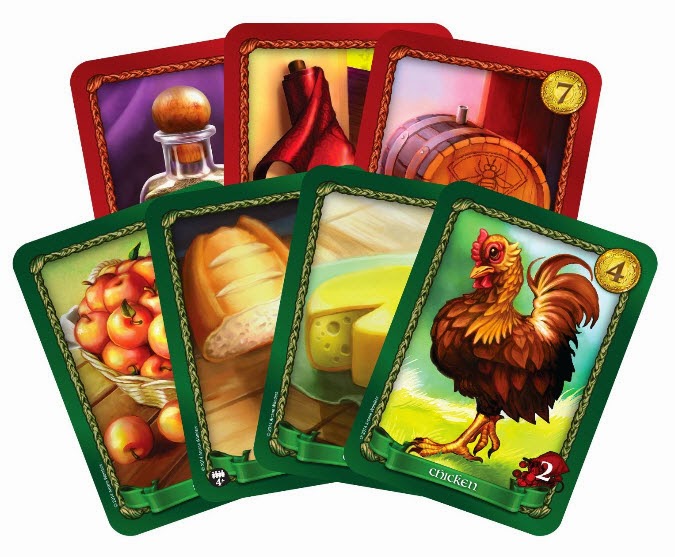 If the sheriff decides to search one or all of the packs, he unsnaps them and inspects. Once that sack is unsnapped, there is no going back. The sheriff then inspects the cards. If they are all legitimate – say you said there were four pieces of cheese and that was in fact what was in there, the player’s four pieces of cheese go to market. The sheriff then, has to pay a penalty for having guessed wrong, and owes for the items he inspected – essentially having wasted his time. That is the risk in being the sheriff and inspecting. However, if even one card is not actually what was declared, then the player may carry through any of the cards that match to market – but has to pay the sheriff a penalty on the confiscated items. There is the reward proposition in searching.

Those mechanics alone would make for a quality bluffing game, but there is a lot of gray area during the searching phase. Players can attempt to bribe the sheriff. They can pay out of their coin pile, out of what they have in market or even out of items that are in the sack. If the sheriff accepts the bribe, he or she will just let the bag on through without inspection and the player who bartered pays up. What makes this all work is that every turn – a new person is sheriff. In a three player game, each player is sheriff three times and the game ends. In four or five player games, each player gets two cracks at the role. What goes around, comes around in this game.

My example above about all five cards being contraband? I was desperate in that game (I still had to settle for second, but I was dead last before this maneuver). I stuffed five very expensive contraband items in there, not the five apples I had claimed. The player posing as sheriff that turn was having none of it and saw right through me (apparently, I am a lousy liar) and picked up my sack to search it. Before he unsnapped it however, I quickly offered him a bribe of my last twelve coins. He knew he had me, but anything goes before the sack is opened. He looked over what I had left, and finally relented and searched another player instead, taking my bribe. His eyes went pretty wide however, as he realized he had let not one or two contraband items through, but a whole stack of five. That daring move put me back into the thick of things, but had he not taken my bribe and searched? It would have bankrupted me as well. Had I been telling the truth though? He would have been out ten coins. It is a constant evaluation of risk versus reward.

Not only do the rules change slightly depending on how many people are playing, but so do the types of cards that get shuffled into the deck. Different cards have different values – both as rewards and penalties. After the last turn is played, players add up the values of their cards that made it to market and combine that with their coins and also pay out bonuses based on who had the most of a type of card make it to market (such as apples).

Before long, we were all laughing at the table, and each person tried to develop different strategies. One of the guys went the dead serious route almost every time. Unflinching, unblinking, he tried to be blank slate from which you could draw nothing. It worked more often than not. I opted for a more erratic route, cracking some sort of a joke each time. I figured I would stink at hiding tells and attempting to be serious the entire time, so I opted to be a joker almost every time. 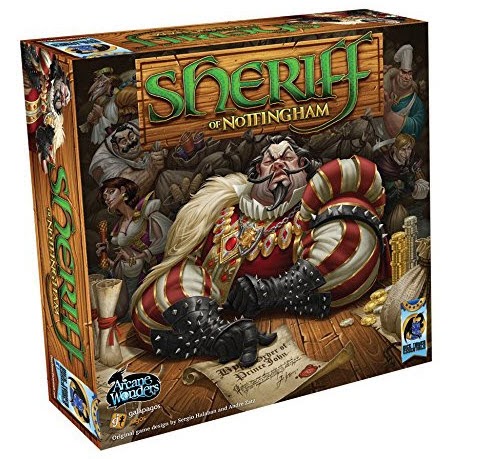 I was surprised at how quickly this game was learned by the table. Ten minutes and we were off. It took longer to punch out all of the pieces, I think. Larger games can certainly take longer – closer to an hour. Three player ones were getting wrapped up in about thirty minutes, but I think fewer people to consider makes the sheriff’s job a good deal easier. This is where having some sort of a timer can really ratchet up the pressure in larger games. It is fun hearing two different people trying to out-bribe the sheriff at the same time – especially if the third one is sitting back with perhaps the most contraband-ridden hand of all. You never really know until the cards are either looked at or make it to market.

As for the components, there are not a lot of them – but they are solid construction. The market boards and coins are thick pieces of cardboard while the cards are of similar stock as most playing cards. They hold up to lots of shuffling without fraying at the edges too badly. The small pouches are a cute idea with snaps that have a nice audible click that adds to the tension when the sheriff is deciding whether or not to open them up for inspection. The overall artwork is colorful and pleasant. I may or may not have been humming tunes from the old Disney Robin Hood to mess with people now and again.

Sheriff of Nottingham is a lot of fun, and it makes for a more sociable game than many others. While there is some strategy to it and also some luck, those elements are less prevalent than a lot of other titles out there. If you are looking for deep tactical play or miss the feeling of exhilaration when rolling dice and beating the odds, Sheriff of Nottingham probably will not do much to scratch that particular itch. Mixing up who you are playing with and adding variant rules might prove important after a time, because I noticed after a handful of games that some tendencies started to show up. Certain players had a tendency to get searched more, some sheriffs were easier to fool than others, so there was a hint of repetition that worked its way in after a time. However, if you are looking for some laughs and a different kind of social game, bluffing your way with your friends here should be a good time by all.