“You wouldn’t play your favourite computer game on mute, so why play unaccompanied at the gaming table.”

That is one of the taglines found on the Syrinscape website, and on several levels, it makes a lot of sense to me. What Syrinscape promises is an application that will provide gaming sessions with a variety of soundtracks and effects to help bring some extra life to the table. 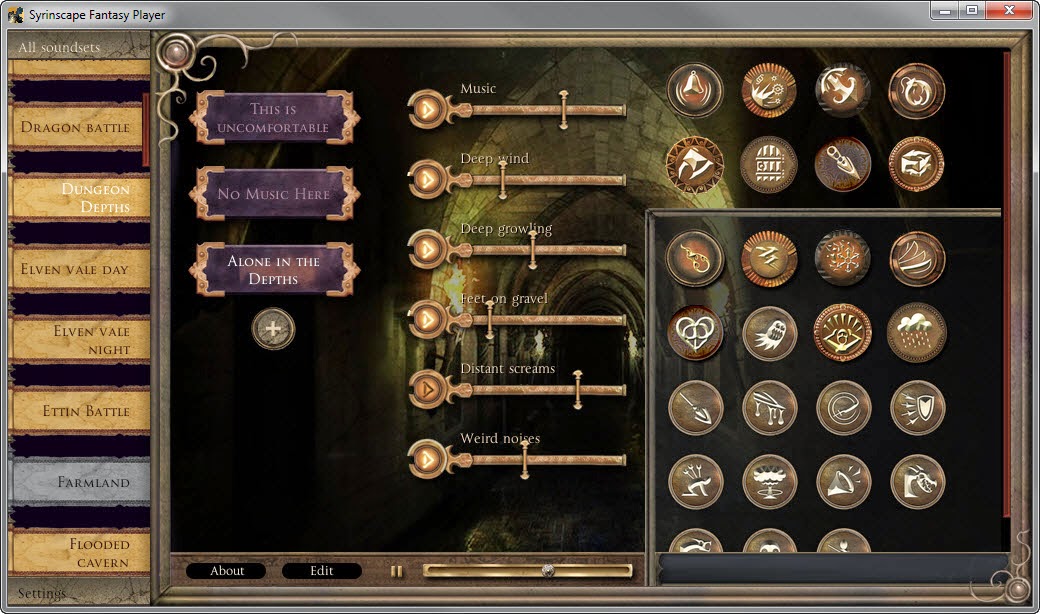 At first I did not know exactly what to expect. Was this going to be a collection or popular or royalty-free songs with some stock sound effects slapped against them? There would not necessarily be anything wrong with that, as it would still serve as a potential tool of immersive convenience. However, Syrinscape has much more creativity in its DNA.

Benjamin Loomes brings his passion for tabletop role-playing and mixes it with his experience as a pianist, singer and composer. The end result is Syrinscape, which attempts to help set the mood in gaming sessions. This is something I dabbled with in the past by playing Ravenloft’s Light in the Belfry and utilizing the official D&D soundtrack years ago in some of the sessions I would run. It was all about setting the mood, just like playing in a darkened, candlelit room or printing off puzzles or clues for players to ponder instead of asking the DM to recite it again every fifteen minutes.

I tried those, and usually had varying degrees of success. Obviously part of it is the group you are playing with. I had some parties that simply wanted to fight, and have things described. However, for those looking for more mood and immersion, the attempts at using music was better received. However, sound effects were unreliable back then, as I was playing CD’s that required a player that could hunt and play easily. This became easier over the years with mobile devices or laptops that requires a good deal of preparation on my part to get things ‘just so’ for the session ahead.

Syrinscape offers a few levels for the DM to consider. One is the base music or ambient effects that loop in the background. These come in different modules that you can select from the bar on the left, and can be accessed a couple of different ways. Both the fantasy and science fiction player offer a couple of freebies that anyone can download and use, but there are plenty more options to choose from. They can be purchased as stand alone that you get to keep, or you can subscribe to the service and get access to everything for a month. My personal suggestion would be to try the subscription first and learn which ones you like best, and then consider investing in buying those modules outright.

If it was just the looping music, Syrinscape would be handy due to its portability (you can use it on mobile devices or a computer), but not all that different than what my son and I tend to do (which is play video game or music soundtracks in the background on his iPad or my laptop) prior to trying Syrinscape. Each module has a handful of presets. Take Dungeon Depths for example, as it has settings called: This is Uncomfortable, No Music Here, Alone in the Depths. This next layer of interaction comes in the form of sliders on the interface, which let you control certain aspects of the sound and music as it loops. There is the music track, which can be made louder or softer, but also deep wind, or growling, or the sound of feet on gravel and even distant screams. These sliders let you customize from the aforementioned presets and even save them if you like for future use.

There are different sound effects that can be applied as well. These could range from the creek of a door or tree, to the sound of weapons clashing to dramatic beats of music or even the infamous Willhelm scream. The idea is that these sound effects can be used in time with events taking place in the session to held add some additional emphasis above and beyond how the Dungeon Master might be describing the scene. 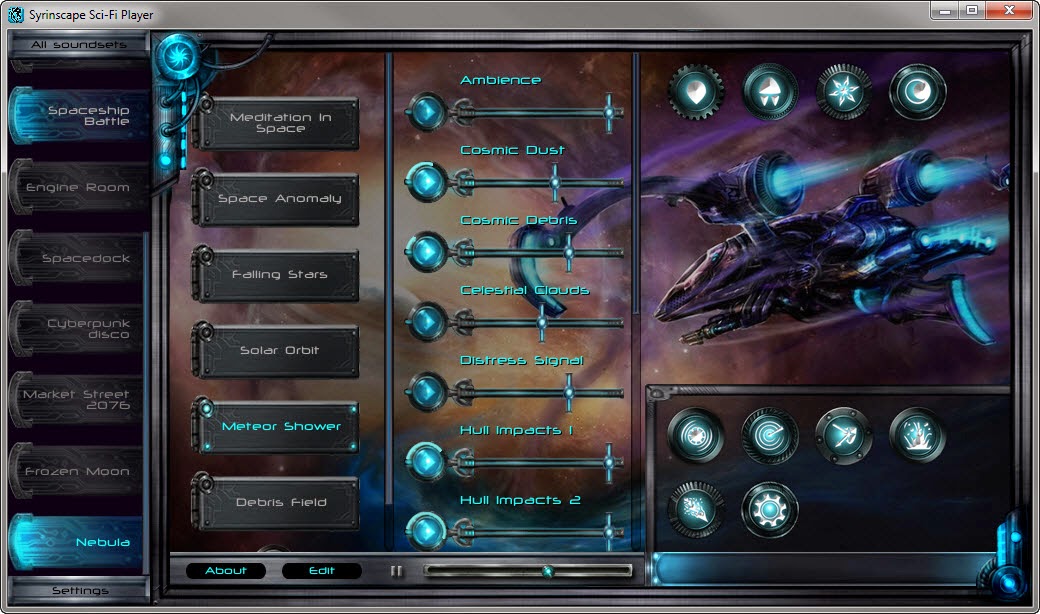 So how well does it all work? Really well. I tend to use my laptop with it (because I often have other various notes on it for gaming sessions), but my son was using his iPad with it as well. My son was making use of the science fiction player and the Nebula module as background music for our board game of Risk: Mass Effect the other night. Once in a while (usually when he managed to beat his sister on some tough rolls), he would reach over and poke one of the sound effects like ship blasters to help him gloat a little. I think I found it more amusing than my daughter did.

However, the meatier of the two players is the fantasy one. There are a lot more modules for it currently, with a greater sense of variety. Some of them are all about the ambient sound effects, such as a generated thunderstorm with howling winds or very faint, spooky sounds that would feel right at home in a horror game like Ravenloft or Shadows of Esteren. However, a variety of other scenarios from deep dungeons to bawdy tavern fights are available as well.

In terms of the actual application of the software, the use of music feels like a no-brainer decision. It only takes a little bit of prep work to get a couple of customized tracks set up as well to suit whatever mood you are attempting to create. Because it is a touch interface that is light years beyond skipping around a CD, it is more flexible for when players inevitably deviate and catch you by surprise as well. That you can quickly adjust it to match the tension or breaching a new area is a huge bonus.

The on-demand sound effects are an interesting idea that I got a bit less use out of. There are certainly some instances where they worked well, such as having a player trigger an event in a dark,d dank dungeon and hearing a door or gear grinding to life down an unexplored hallway. This is as effective, if not more so, than having the DM try and describe it verbally. Less effective is trying to match up swings and swipes that go with combat. I am usually busy enough rolling creature dice or trying to evaluate what a player is doing to worry about pressing the right button at the right time on the application. I found myself mostly ignoring the action buttons unless it was for a single, specifically premeditated sound.

Syrinscape is absolutely worth a look if you are looking for an easy way to add some atmosphere to a gaming session. While it was designed for tabletop roleplaying games, it works well for some ambient sound and music while playing board or card games as well. This is not a new idea in and of itself, as evidenced by my memories of CD shuffling past – but this is the best execution of the idea I have seen to date.