Yesterday I had a chance to talk about the Trigger Treadz sold by iMP Gaming. They are a nice accessory that do what they advertise, but might not necessarily been seen as a must-have from a competitive edge standpoint. The other product in the Treadz series is Thumb Treadz. These work off of the same principle but for a different part of your controller. 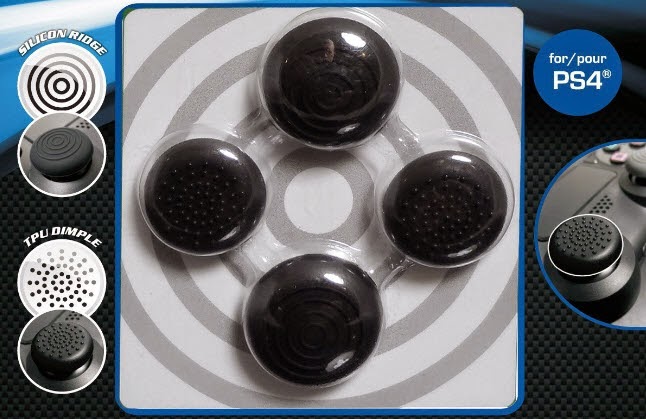 Like the Trigger Treadz, Thumb Treadz are available for both the Xbox One and PlayStation 4. Let me begin by saying how much I would have loved these for my PlayStation 3 controllers a few years ago. Perhaps there was something out there like the Thumb Treadz and I just missed them, but as much as I liked the DualShock 3 controller, my primary annoyance with them was the rounded convex design of the analog sticks.

The newer consoles have better designed controllers. There is now a raised lip around the edge of the DualShock 4 while there is a nicely textured ridge around the edges of the analog sticks for the Xbox One. Thumbs can settle into the tops of the sticks nicely for excellent control and limited slippage. That being said, there is always room for improvement and that is where the Thumb Treadz come in.

Applying Thumb Treadz is actually very easy. Unlike the Trigger Treadz, these simply slip on over the top of the analog sticks. The software Silicone Ridge style goes on more easily, but I was actually quite impressed that they do not slip around at all. These covers are very snug to the sticks and after hours of play, I noticed only the slightest amount of shifting off of the center by the Silicon Ridge style. The other style was somewhat more difficult to get on, but it did not seem to shift about at all. 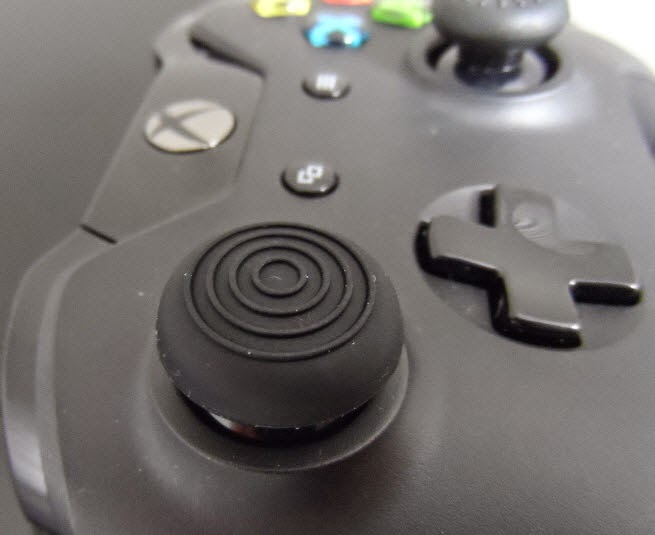 Like the Trigger Treadz, the Thumb Treadz come in two distinctive styles. In fact, I felt that there was considerably more of a difference in these treads than the trigger ones. Silicon Ridge is a softer, slightly larger covering for your analog sticks. It has a circled pattern akin to a bull’s eye on the top of it. It is a more supple covering that even pushes into the indented tops of the analog sticks just a little, providing an excellent surface for your thumb. The Silicon Ridge is both comfortable and adds plenty of traction for your thumbs.

The second design is called TPU Dimple. This cover feels quite different, and was my preferred of the two styles. My kids all liked the Silicon Ridge, and my youngest actually said that the TPU Dimple was sort of ‘irritating’ to her. I however, really liked the firmness in them. The analog sticks had no slip to them at all when I was using these. I will agree that because of their texture and firmness, they could perhaps be less comfortable after prolonged gaming sessions, but there is a palpable advantage to these over the Trigger Treadz in my mind. Slipping off of a controller stick just happens, whether you have large hands or not. Just about every game uses one, if not both, sticks, and since they are almost always in some fashion or another under tension, the analog sticks feel more important than the triggers overall. 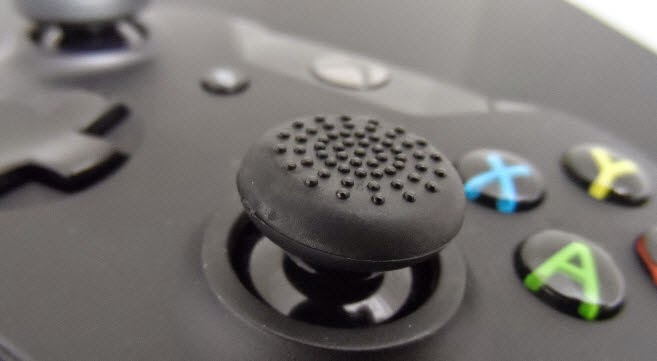 There was not real difference between the two from one console to the other. Likely because the sticks themselves are slightly different in size going from PlayStation 4 to Xbox One, the carved out piece of the Thumb Treadz is slightly different to match, but it is far less discernible that the differently shaped triggers on the two controllers. The Thumb Treadz performed equally well on both consoles, though here my opinion was flipped slightly. I appreciated the Trigger Treadz more on the smooth Xbox One triggers, but here I liked the added texture of the Thumb Treadz slightly better on the PlayStation 4’s DualShock controller. I think that is perhaps because I already preferred the feel of the ridged edges on the Xbox One controller’s analog sticks.

Because the Thumb Treadz are not fixed into place with any kind of adhesive, I wondered if they would retain their position on the controller sticks well. That question was answered pretty early on and they did exactly what they advertise – offering a better texture that helps to reduce slippage while playing games. The two textures are actually quite different from one another, and I get the feeling everyone will have their own preferences, but both styles suited me just fine.