This is a very cool journal update addressing the progress of Torment: Tides of Numenera – and it is absolutely worth taking the time to read through if you have even just a passing interest in the game’s progress. 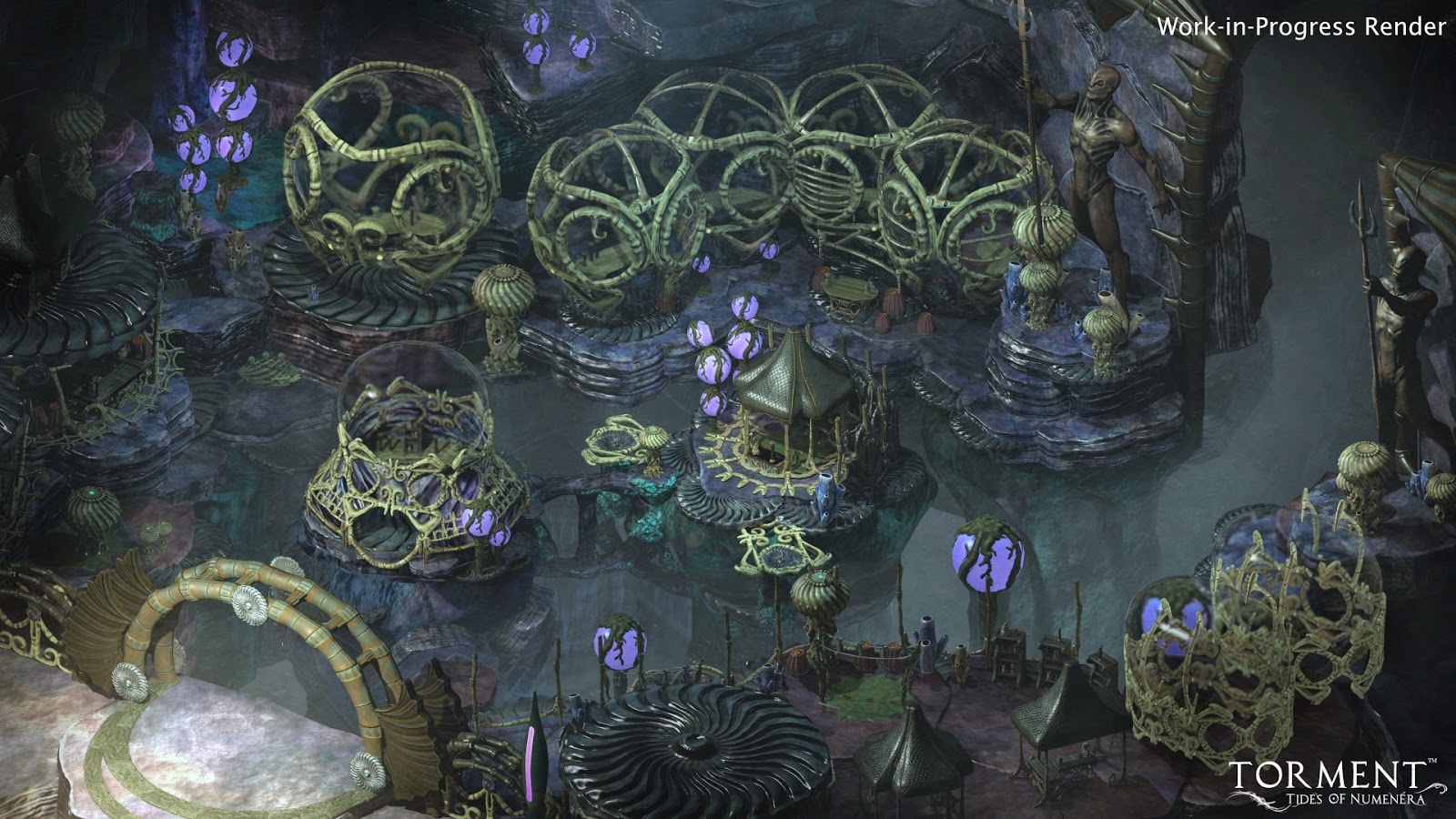 Thomas here. Today we want to talk about Effort, a key mechanic in Numenera and Torment that we have talked about before as part of our Difficult Task system. Additionally, there are a lot of interviews and posts with different Torment developers for you to dig in to.

But first, if you read our previous update, you may remember we showed a concept art piece by Daniel Kim, showing the Sunken Market in the Oasis area. We thought it’d be interesting to show you the same area again, but this time as an early render:

In the Torment forums, MReed asked some great questions about how we’re handling the Numenera concept of Effort, specifically the UI for such a thing and how it will play.

First, a refresher for those unfamiliar with Numenera. In the tabletop game, nearly every task a character attempts comprises of:

(1) A Task Difficulty determined by the GM. This is a number ranging from 0 to 10, where zero is an automatic success (no roll). All other Difficulties, 1 to 10, are multiplied by 3, and the player must roll a d20 to try to beat that number in order to succeed. This means that any Difficulty of 7 or higher is impossible without help.

(2) Possible Skills or external Assets the PC can apply to the task. These can lower the Difficulty by a maximum of 4 (two for skills, two for assets). This is enough to make easy tasks routine and impossible tasks possible, but just barely.

(3) An applicable Stat (Might, Speed, or Intellect). The player can lower the Difficulty even further by applying levels of Effort to the task. Each level of Effort deducts points from the applicable Stat Pool and then lowers the task’s Difficulty by one. PCs can apply a number of Effort levels more or less equal to their Tier—so from 1 to 6.

So for example, the player might come across a devilish system of living wires that have embedded themselves into the flesh of a poor creature, and he wants to remove them without harming the creature. The GM decides that this is an Intimidating task (Difficulty 6), so the player must roll 18 or higher to succeed. However, the player’s character is trained in healing and quick fingers, both of which (the GM rules) are applicable to the task, lowering the difficulty to 4. Now he only needs to roll a 12 or higher to succeed.

The player also decides that he really, really doesn’t want to accidentally kill this poor creature, so he spends four levels of Effort on the task (costing him 9 Speed—we’ll talk about how that is calculated later). In doing so, he reduces the difficulty of the task to zero, and so he automatically succeeds (no roll).

It doesn’t take careful analysis to see that Effort quickly becomes more important than skills in terms of succeeding at difficult tasks (though skills allow a player to succeed at certain kinds of tasks more often). Not only does this system allow any character to attempt any task, but Effort also allows players to choose which tasks are most important to them and which tasks they’re more willing to gamble on.

In TTON, we handle tasks with an Effort dialog. Because Effort is a new mechanic—and a key mechanic at that—we decided to display the Effort dialog every time the player attempts a Difficult Task.

“What?!” I hear you say. “You’re telling me I have to click away this annoying pop-up every time I try anything?” Yes, that’s what I’m telling you. But it’s not annoying at all—the opposite, actually. Part of that is there aren’t as many difficult tasks as you might think. Each task is uniquely crafted (that is, you won’t be picking twenty generic locks in a row), so when there is a difficult task, the Effort dialog adds import to it, making every task a potentially significant event. You don’t click the pop-up away. You make a real decision, every time.

(“But can’t I just reload until I beat the task without Effort?” You could, but in some cases you’d be missing out on content that is only available when you fail some tasks. And anyway, as I’ve said in the past, savescumming isn’t technically any easier, it’s just a different way to play.)

What do you see when the Effort dialog appears? This:

The difficulty of the task. By default, this difficulty appears as one of eleven abstract labels (e.g. Routine, Challenging, Impossible, etc.), but you’ll be able to change this in the Game Options to show the actual target number (i.e. the Task Difficulty multiplied by 3) or to not show any difficulty at all.

The adjusted difficulty of the task. If you have any skills or assets that apply to the task, then the initial difficulty will be visible but crossed out, and the actual difficulty (what you’re trying to beat) will appear beneath it. Note that it’s possible to have penalties, such that a task is harder than the base difficulty for some characters. That will be reflected here as well.

When you mouse over the difficulties, a tooltip will display showing you what skills and assets you have that are adjusting the difficulty (if any). This way, we don’t have to clutter the dialog with a bunch of text, but you can have access to all the information if you want it.

An icon conveying which stat applies to this task. This determines which Stat Pool the Effort cost comes out of. Most tasks will only allow one stat: Might, Speed, or Intellect. In special cases (usually when the PC has certain abilities), a PC might be able to choose to replace the original Stat Pool with a different one. For example, a Jack with the Brute Finesse ability can choose to apply either Speed or Might to non-combat Speed tasks.

An Effort slider. This allows the player to choose how many levels of Effort he will apply to the task. As he increases the slider, the Effort dialog will show him how much Stat Pool will be deducted and the adjusted difficulty will change to reflect the Effort he’s applying.

Sidebar refresher: The first level of Effort costs 3 from the applicable Stat Pool. Every level of Effort thereafter costs an additional 2. If the PC has any Edge in the applicable Stat Pool (another thing you gain each Tier), then his Edge is subtracted from the overall Effort cost. So if a player has 1 Might Edge and purchases two levels of Effort, it will cost him 4 Might (3 for the first level + 2 for the second level – 1 for his Might Edge).

If the PC has 3 or more Edge in the applicable Stat, then the Effort slider will automatically be set to however many levels of Effort that PC can get for free.

What about combat (I hear you say)? Aren’t there a LOT more difficult tasks in that?

There are. In the tabletop, Effort can be applied to every roll—and the player always makes every roll. That means Numenera players can opt to apply Effort to attack and defense.

In TTON, the Effort dialog will appear for every attack you make. Our design calls for tactical combat, so each attack decision is already significant. And just like tasks outside of combat, the choice of whether to invest Effort adds to the significance of those decisions.

Defense is different, however. The player is not deciding to be attacked, and the party will likely be attacked several times in a row. We didn’t think the Effort dialog would be much fun in that case, turn-based combat or not.

Instead, we’re treating Effort on Defense as something you can set (or not) on your turn—a kind of defensive ability that every PC can use. Since most attacks are against Speed Defense, that will be the default Stat Pool used for Effort on Defense, but the player can optionally choose to apply Effort to Might or Intellect Defense instead.

If a PC is using Effort on Defense, the cost will not be deducted unless they are attacked that round and it will be deducted only on the first attack. So you don’t have to worry about what might happen if you apply one level of Defensive Effort only to get attacked by a swarm of steel spiders and lose all your Speed even though none of them actually hit.

And of course, if a PC has enough Edge to get a free level of Defensive Effort, they will get that Effort all the time.

Keep in mind that there is still a LOT of playtesting to be done, especially with combat. So the details of all this are still subject to change. But this is how we’re thinking of it right now. So far, it’s working pretty well.