Back in the early 2000s (2002 or so?), my brother handed me a book he thought I would like.  It was A Game of Thrones, the first book in George R.R. Martin’s A Song of Ice and Fire series.  At first, I was a caught a little off guard by the fact that the perspective shifted between characters every chapter, but once it got going, I was hooked.  I immediately went out and got the next two in the series and joined the fans waiting for book 4…and 5…and now 6. 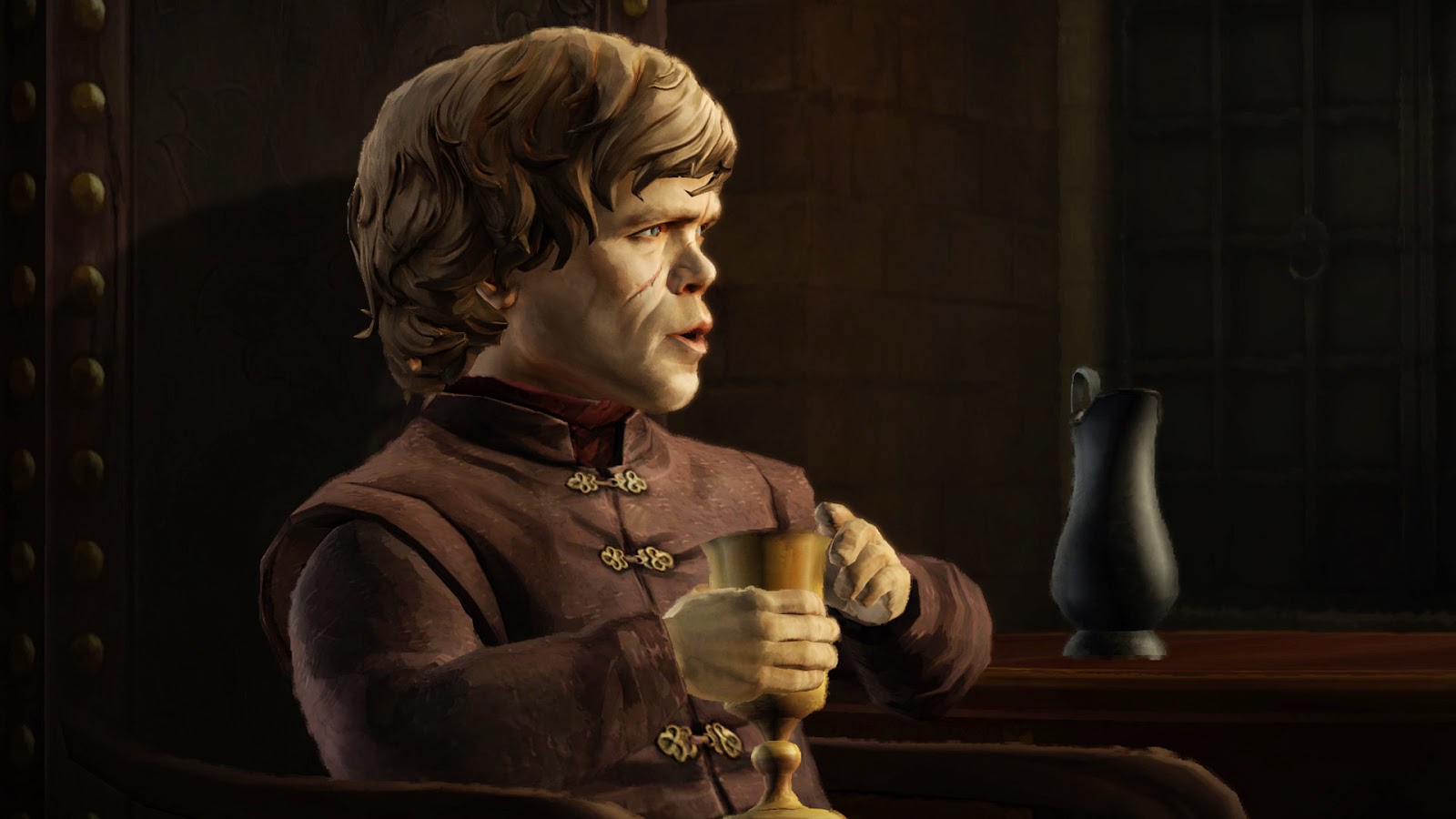 A few years later, I heard that they were going to make it into a TV show.  “Oh crap, this is going to be terrible.”  And worse, one of two things will happen.  No one will notice it or worse, people will forever associate the shoddy TV show with the fantastic books.  If I ever mention being a fan of the books, people will think something is wrong with me.

Wow, how wrong was I?  Now it is almost a badge of honor to have read the books before the show came out.

Hindsight being 20/20, I really should’ve trusted that with George R.R. Martin being directly involved, the show would stick to the most important thing, which are its characters and the relationships that they have with each other.  And good, well-written characters put into interesting situations have a chance to do well with any audience and CAN be successful.  I would say WILL be successful, except Firefly proved me wrong… 🙁 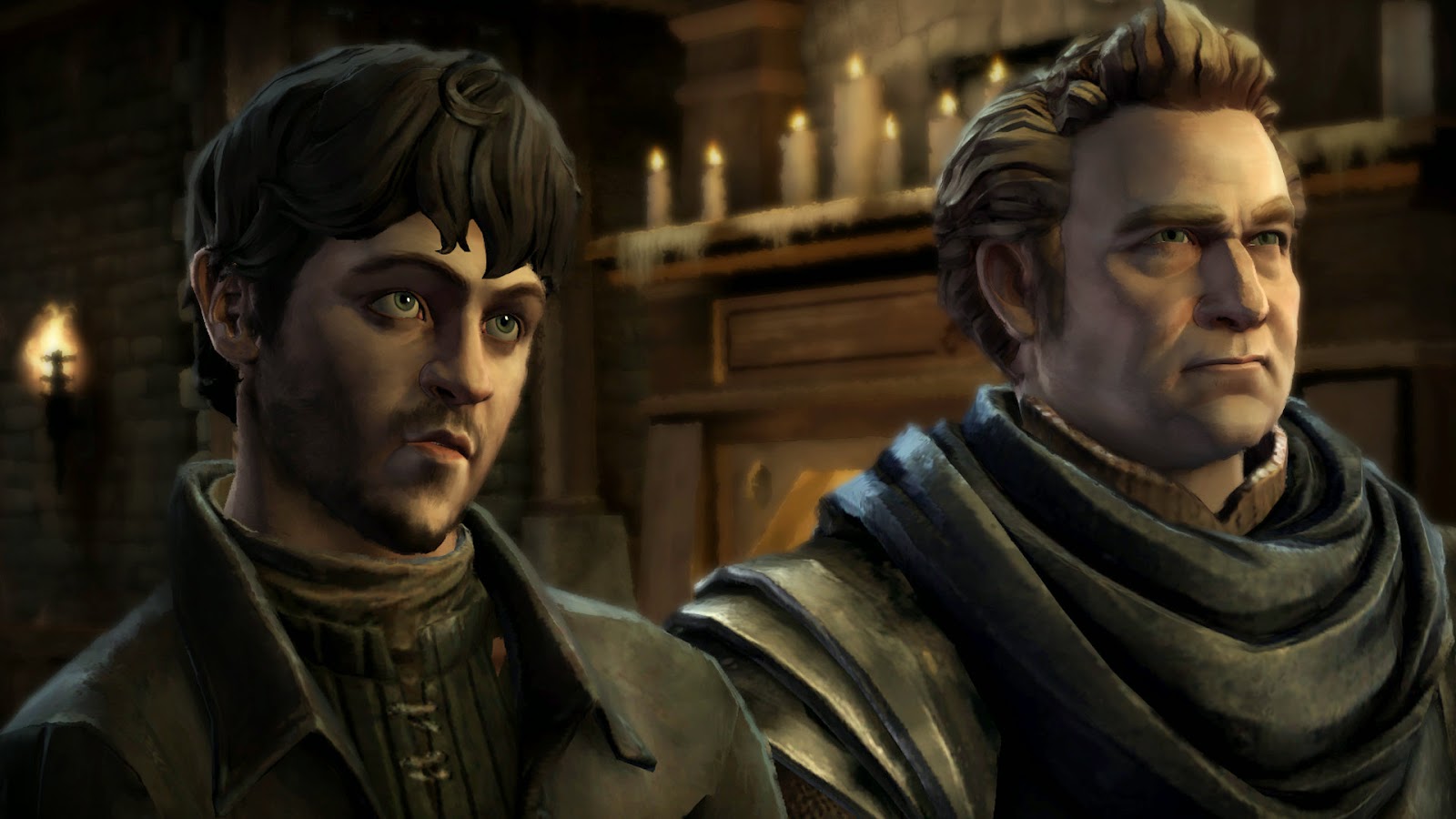 When I heard that they were making a Game of Thrones video game, I had mixed feelings.  It was going to be an RPG with an original story featuring new characters. Once the TV show turned out to be a popular success, they added in assets and a couple of actors to sweeten the deal.  Still, I have bad memories of plenty of other fantasy franchises that didn’t translate well to video game form.  Atlus published the Game of Thrones game from developer Cyanide and it was okay.  I didn’t get very far in it, honestly.  It didn’t seem to capture the magic of the show or the books, and it just sort of faded away.

In early 2014, I heard that Telltale had acquired the rights to do a graphical adventure game for Game of Thrones in the same vein as their popular Walking Dead games.

Now THIS is what I’m talking about.  I loved The Walking Dead games.  Why?  Because of the characters and the relationships.  Decisions you made in the game really made you think hard.  In the end, they may not have made much difference (spoiler: lots of people died in those games, regardless of what you chose), but in the heat of the moment, every decision felt huge.  If anyone needed to have the license to make a Game of Thrones game right, it was Telltale. 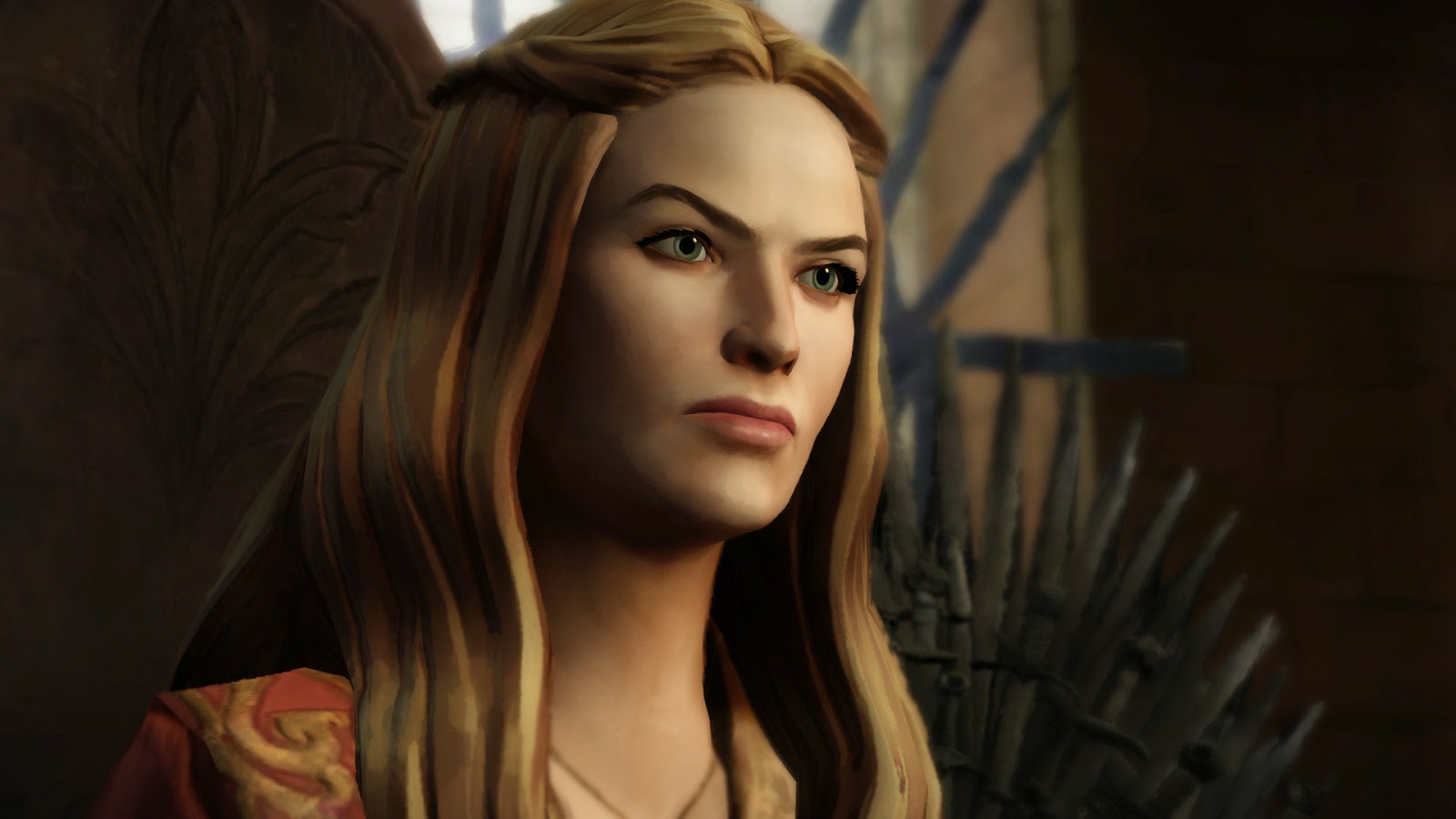 Jump to early 2015 and we are two episodes in.  Can Telltale Games keep their streak of great story-driven games going?  Do they do justice to the responsibility of adapting such a popular franchise?  Mostly yes.

Let’s start with the most important thing.  How are the characters?  The protagonists are various members of House Forrester, a vassal of the Starks.  They don’t really appear in the novels; the name was mentioned once in a throwaway line about Stark supporters, but without any context.  However, ironwood is mentioned several times (basically a very strong wood that is used for many things like ships and shields and buildings).  Telltale was able to craft an entire history and purpose for the Forrester family and what they’ve come up with fits perfectly into the Ice and Fire universe.

As the family responsible for growing, managing, and selling ironwood, it gives them enough influence that the noble houses care about them without needing them to be one of the major houses.  This gives the game an excuse for having characters no one has ever heard about interact with the Lannisters, Starks, Boltons, Tyrells, etc.

Each character in the family has a very distinct personality and their own backstory and motivations.  As a book reader, I was also pleasantly surprised that the story jumps between different characters, just as the novels do.  I was expecting to be cast as a single character, like Lee or Clementine from The Walking Dead.  The risk of splitting the narrative across different playable characters is that it could get disjointed.  Telltale Games avoids this trap, and like the source material they are drawing from, it actually strengthens the overall tale.  You get to see how the activities and decisions in one part of the world are having an effect elsewhere. 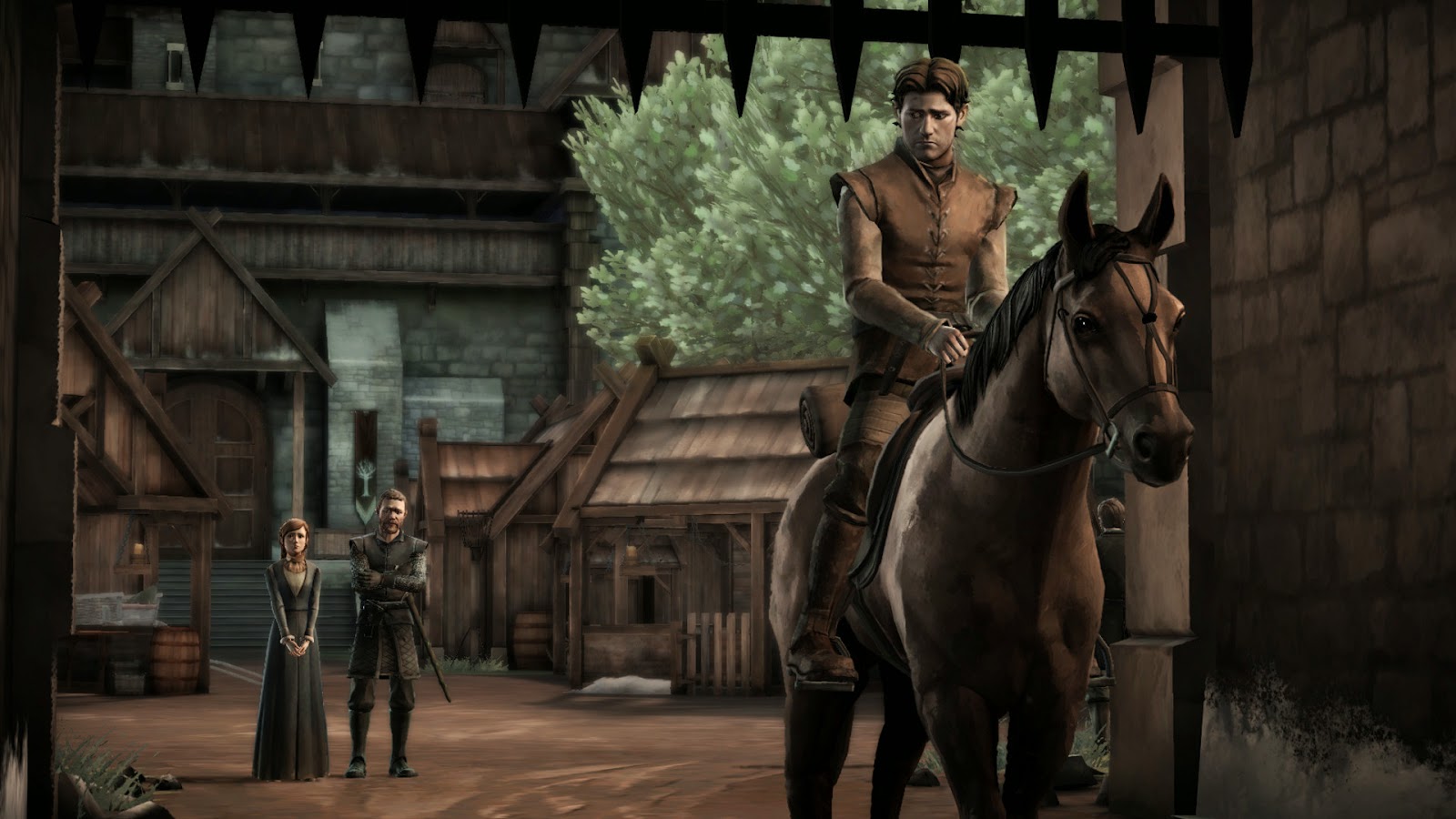 Just as important as the heroes are the villains.  Game of Thrones is full of characters that you hate.  Really, really hate.  The primary antagonists here (a rival family) stand up right alongside the series’s best/worst.

The quality of the characterization really shone through in the way that I made some of the decisions.  I remember one situation where to get what I wanted, I had to show deference to the head of the rival family, who up to that point had proven himself to be a huge Bastard (capital B, and not the unwed-parents-kind–a real douche).  If I don’t do what he wants, I don’t get what I want. Eff that.  And eff him. I’d rather see my house burn to the ground than give that jackass an ounce of satisfaction.

When I’m consciously making a decision that I recognize might not be the best for the long-term health of my character, I know it is because I’m really invested in who these characters are and how they live.

Telltale Games also inherits some of this reaction based on the novel or TV portrayals of some of the other characters.  Every time one of my characters had to talk with Cersei Lannister or Ramsay Bolton, I was on edge.  As a fan of the universe outside the game, I already have a healthy paranoia about what can happen if you set some of these people off.  I was a little less inclined to get mouthy with them than the characters that are game-specific. 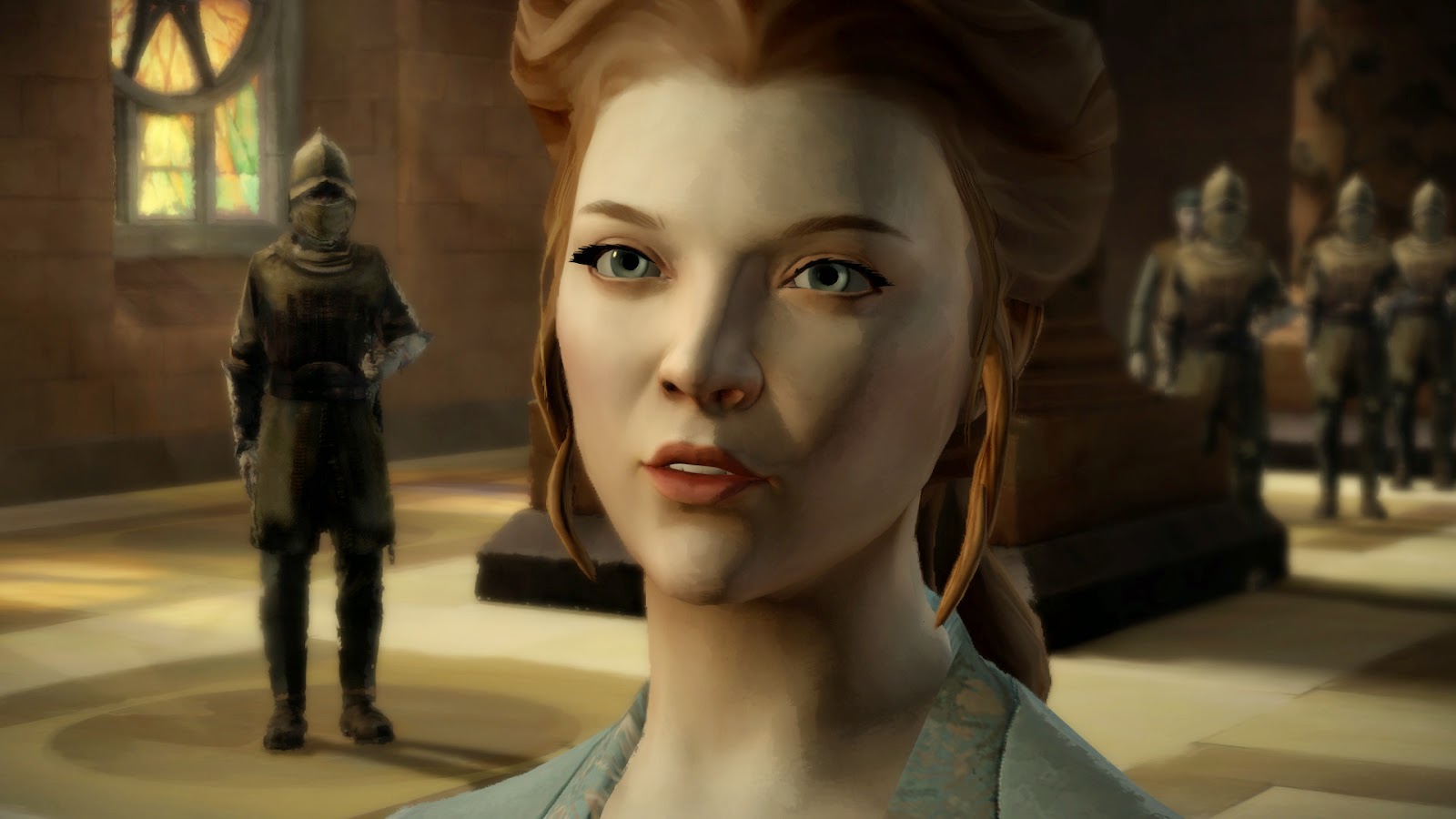 Speaking of the characters from the books/TV show, the game handles them pretty well. They seem to stay in character with their counterparts in other media.

The performances by the cast are well done.  The voice cast for the game-specific characters is very good, even the children.  Clearly, Peter Dinklage is much more comfortable in his role as Tyrion, as his performance is far better than the one he phoned into Destiny.  The other cast members (Natalie Dormer, Kit Harrington, and Lena Heady off the top of my head) turn in fine performances.

Unfortunately, the same can’t be said for their character models.  Game-specific characters look great.  All of the House Forrester characters look very good.  They are all very distinct and attractive in their own ways.

The characters modeled off from the TV show don’t look right, though.  Margaery looks the worst, with a pinched face, although Cersei isn’t much better.  Tyrion looks the best of the TV crew since his face tends to be more angular anyway.

Overall, the graphics engine is really starting to show its age here.  I played this game on the Xbox 360 and I encountered a lot of slowdown throughout the game.  Edges seemed to change between hard cell-shading borders and a softer, almost pencil-like border.  It was terribly distracting and I have no idea if it was even intentional or whether my system was just having issues drawing everything in.  Both of the styles looked good in their own way, but it really needs to be cleaned up and stay consistent. 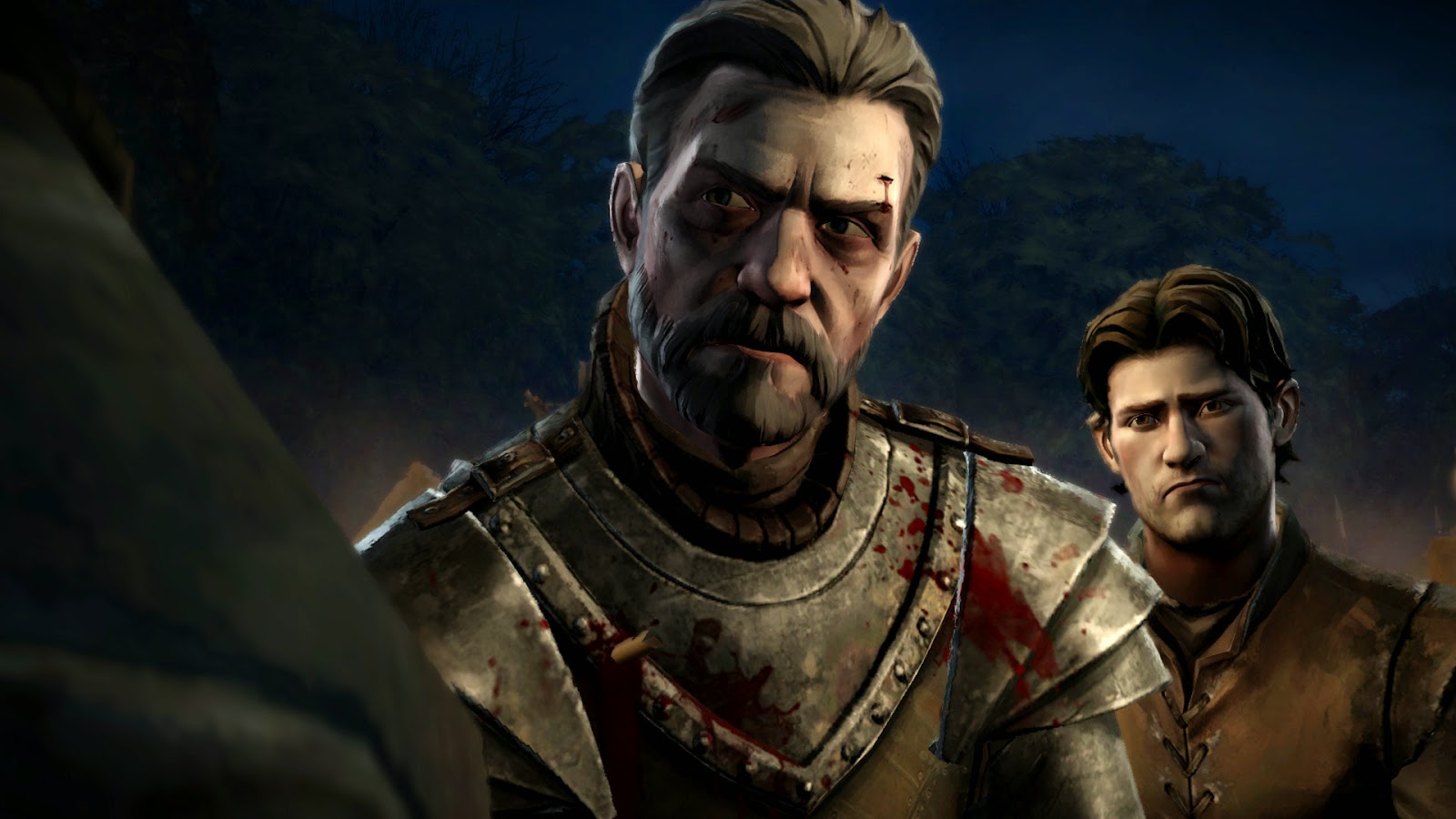 I’m curious to see how much, if any, of the graphical problems I had are also present on the more modern machines like the Xbox One.  I think this is a classic example of a game trying to straddle two different console generations.  They are over-reaching just a bit too much for the older generation to run smoothly without adding enough to it to really seem next-gen enough.

In terms of gameplay, if you’ve played any of the other Telltale adventure games, you know what you are getting.  The game is very heavily driven by dialogue choices and conversation, with the occasional quicktime event thrown in.  The QTEs in this game seemed to be more forgiving than they were in The Walking Dead, and I’m appreciative of that.

Overall, Telltale nailed the most important part of the game.  The characters are great, the writing is great, the decisions you make still feel weighty and meaningful.  I think they’ve dropped the ball a bit on the technology side of things, though.  How many more of these games are we going to have before the engine really starts looking and feeling better?  I doubt we’ll see a lot of significant improvement through the rest of this season (four more episodes), but hopefully they can at least clean up the framerate and speed up some of the loading times.  That alone will help.

In any case, I’m anxiously awaiting the next episode.  At least I know the wait won’t be as bad as the wait for the next book.