Gas Guzzlers Extreme has been out for about a year and a half now, but with some new DLC available for it, it has gotten something of a refresher. The basic game is a fast and furious racer with weapons. Whether you want to compare it to Mario Kart with more fire and fewer turtle shells or Twisted Metal with race tracks instead of arenas, there are pieces of truth to both comparisons. 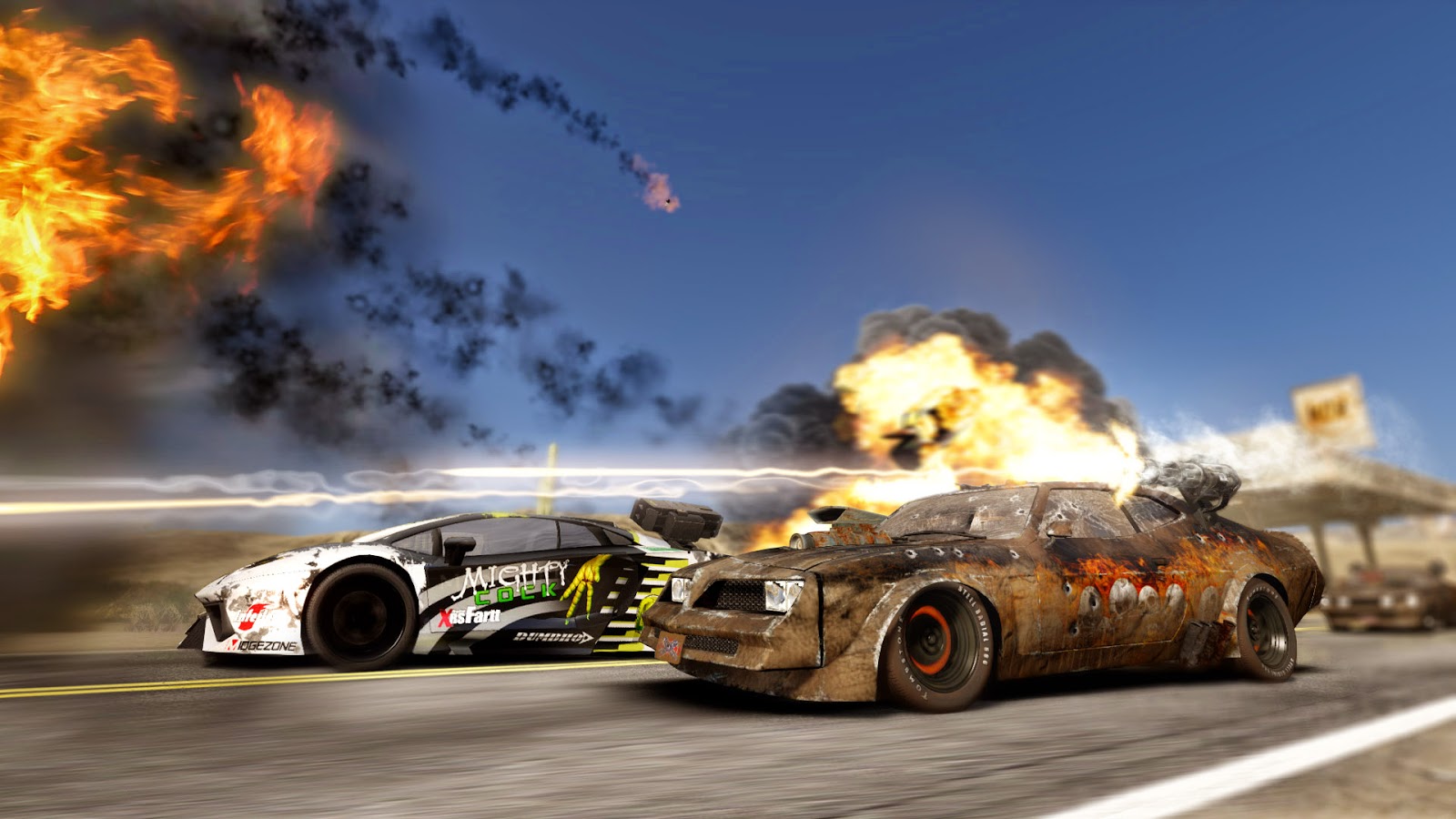 This is a title I rather wish I had heard more about. It is a lot of fun, especially in smaller doses. It does not take itself seriously at all, with plenty of humor and some ridiculous hazards in the road to keep things lively (seriously – explosive barrels. They are so much fun to ram the other cars into). The track designs are also incredibly smart, with high risk and high reward shortcuts that remind me of Mario Kart.

This is absolutely an arcade style of racer. There are stats on the different cars, and money is earned to purchase upgraded vehicles and weapons, which serve as great progression hooks. In truth there is not a ton of innovation to be had here – we have seen just about everything Gas Guzzlers Extreme has to offer in other games prior and since. What is of note is how well done it all is. 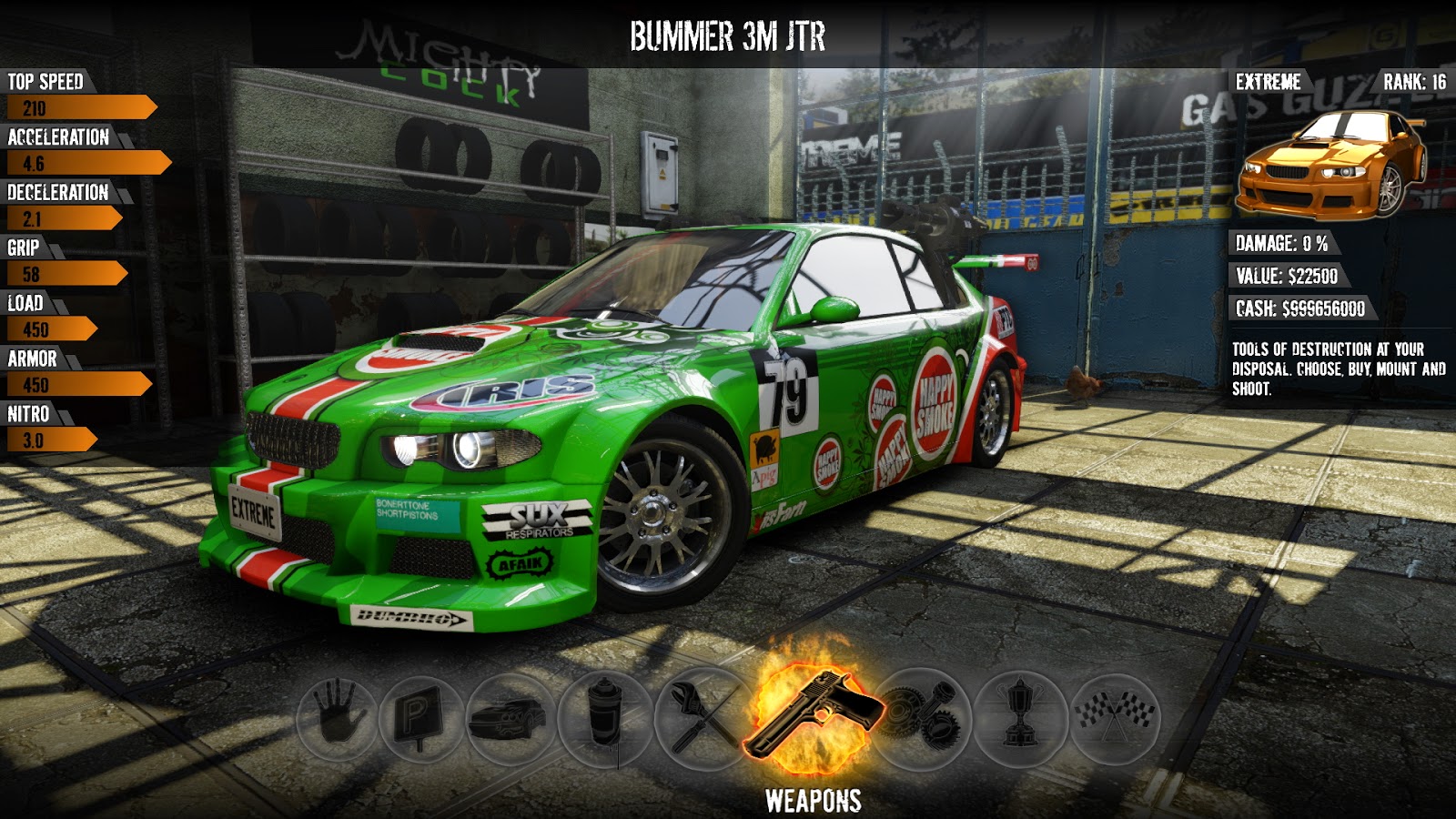 For starters – use a controller. There are some different input options, but as with most racing games, the use of a controller just feels right. Moving along, the first race is a great taste of what is to come. You get dropped into a race with plenty of weaponry and other cars to compete against. I had no idea what I was doing right at first, but before long I understood that I had weapons for in front of and behind myself and I was able to finish in the top three (despite the fact I am not very good at most racing titles).

Then you are dropped into a garage where you get to pick from a couple of heaps. After the thrill ride that was the introduction, the meat of the game is now presented as a double edged sword. It is a bit of a letdown to have to wheel about in a blue boat of a car with nothing special about it, but by the same token the developers give you enough of a taste of the good life that you want to progress and buy those other shiny toys sooner than later. 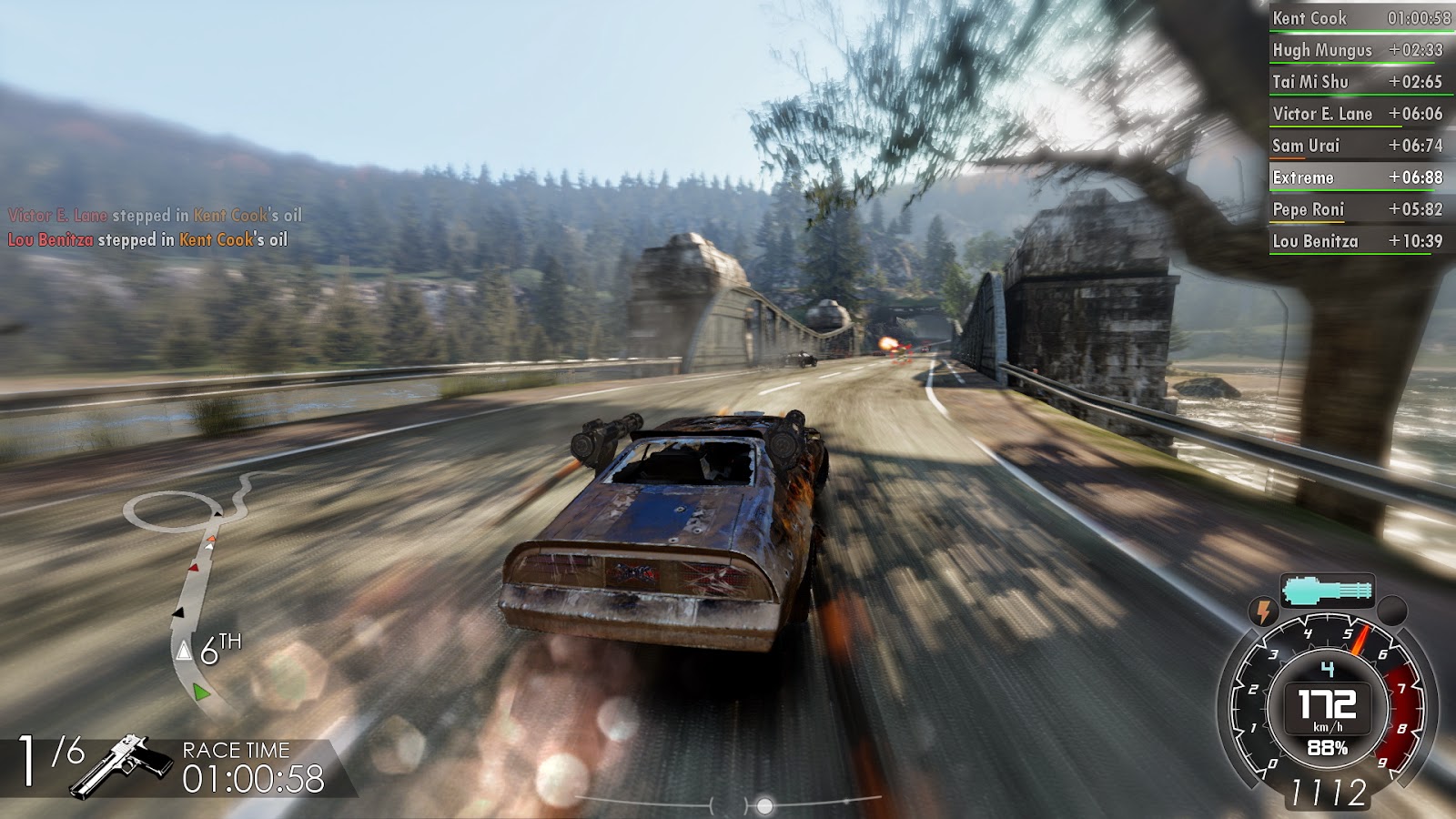 I play plenty of racing games such as Forza or Driveclub, but the ones that reward aggressive driving (even in cartoon form such as Mario Kart) appeal to me most, and Gas Guzzlers Extreme has that in spades. Opposing AI is solid and aggressive, frequently trying to push me off of the track or clipping the back end of my car to spin me out. In later races when everyone has weapons? They are not afraid too use them. It is probably a good thing too, since the online community is more or less dead by now. If you are looking for a lot of robust multiplayer experiences, Gas Guzzlers Extreme will probably leave you wanting, but at least the AI carnage still holds up.

While visually this title might look a bit like Twisted Metal with its oversized guns mounted on beaten up cars, the game is actually about racing around a track (most of the time). There are some other modes and challenges (capture the flag is a hoot). Despite the grittier appearance, this has more in title with a Mario Kart game. The unlocks that can be purchased are fun to tinker with and provide most of the replay value. There is nothing to speak of here for a story, so those looking for some sort of a deep narrative might want to turn their gaze elsewhere.

Take your thinking cap off, weaponize a car, bask in the sharp visuals and fast gameplay and prepare to blow some things up. An arcade racer through and through, Gas Guzzlers Extreme does nothing to reinvent the wheel, but it does a solid job in putting the parts together and cruising along at top speed.