I would like to preface this review by stating that I am not good at puzzle games, or platformers. This is nothing against either genre – they are fun but I am not particularly good at them. Grapple presented a challenge for my meager skills and I only got to level 19 of 90 before I got the dubious achievement of “persistence” (respawn 100 times). Needless to say that Grapple was generally a fun, quirky addition for players who are looking more a unique challenge. 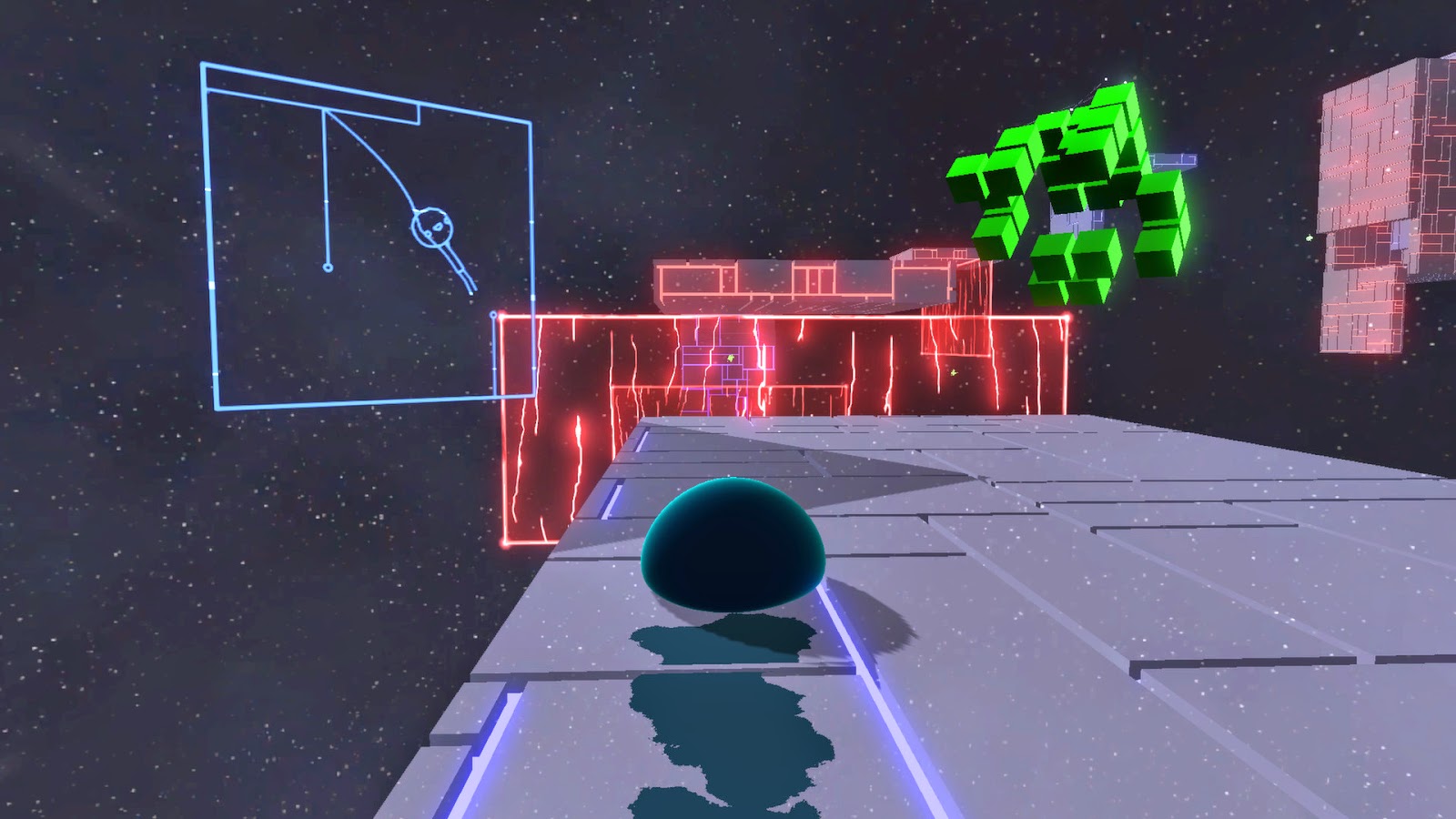 Grapple looks sort of like you were dropped into the middle of a geometric themed pile of space debris. The platforms you are meant to traverse are either 3D rectangles or other objects such as spheres and cylinders floating among the stars (editor’s note: the visuals sort of remind me of the old Star Wars X-Wing game from the arcade a million years ago – which I personally consider a good thing). You play an odd black blob of goo and you must run, jump and swing your way through the virtual word like a corpulent George of the Jungle.

There are two sets of platforms. They come in either red or blue and are either solid or transparent. While both the solid and the transparent platforms can be crossed by running on top of them, only the solid platforms allow our blob to attach and swing from them. Be warned though: only the blue are safe to walk upon while the red will instantly disintegrate you. Part of what made Grapple interesting is that your character is not simply running and jumping your way through the level. Often you find yourself making huge leaps of faith or trying to swing around vertical monoliths of certain death to get to the safe side. There were many “ok….well…that worked” as I played through after having frantically swung my way back on track. 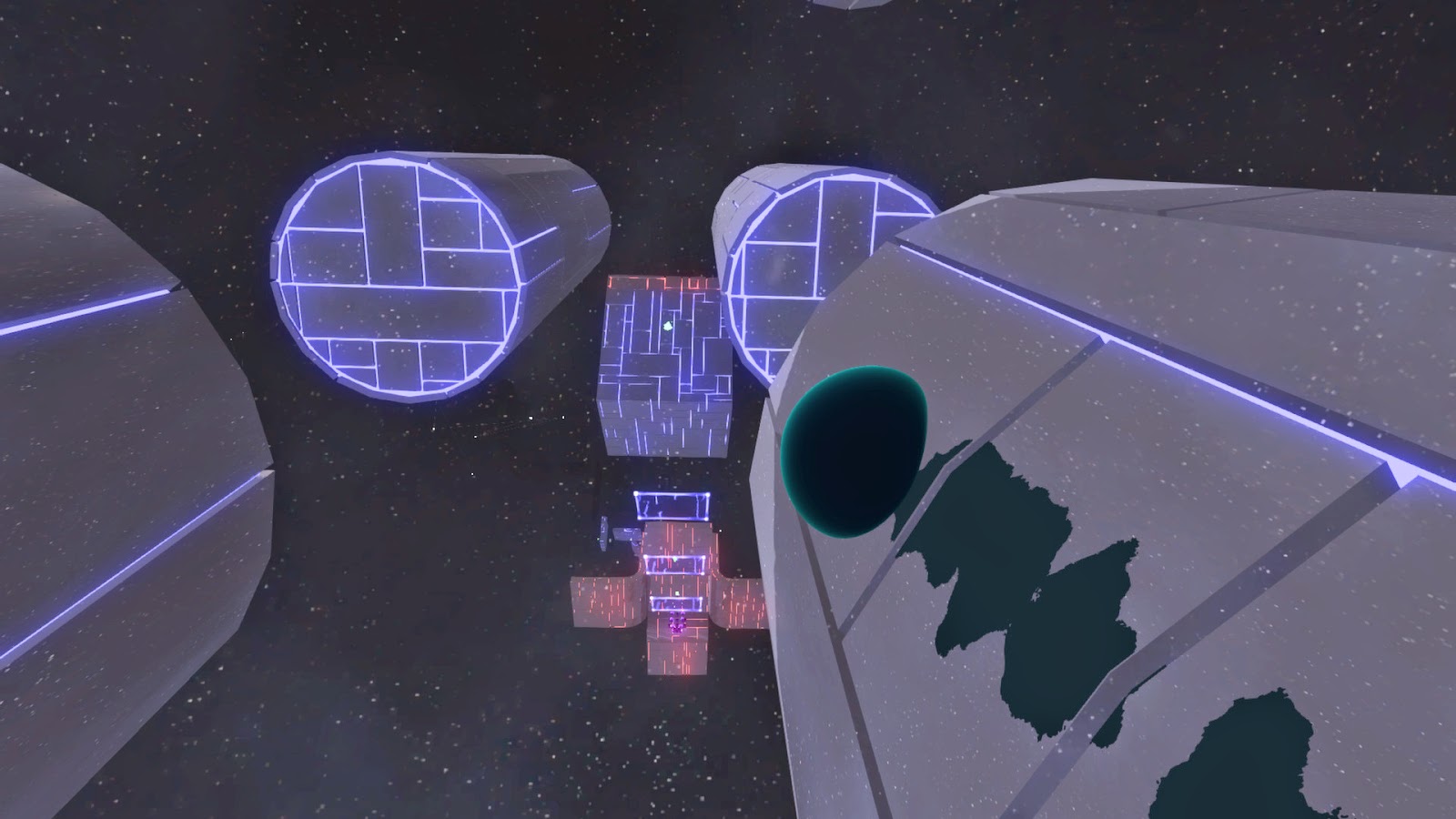 The game has no real tutorial, rather it drops you into the first level with a picture of a funky stick man showing you how to move and what keys are assigned to what action. As you progress your stick buddy introduces you to new concepts such as “don’t touch the red platforms” and “right click to attach yourself and swing”. It is a simple, effective way to show the player how to beat the level without weighing everything down with a lengthy tutorial.

As you go through each level on the way to the portal at the end, you will find groups of green squares which are collectables and check points. You will also come across groups of white squares which, when triggered, show an image of your funky stick men dancing or doing something strange, which made me giggle. There is also a speed run mode which challenges you to run through all the levels as fast as you can.

Graphically, Grapple is simple. The geometric shapes are all grey with either blue or red computer chip like veins running through them and the background is simply stars in space. The trance soundtrack and the techno looking environments give the game a funky feel and provide an interesting game experience. For some players that simplicity could be appealing as it allows you to focus more on the actual puzzles of the game.

One of the key features according to the developers is the powerful movement. You can slide, swing and jump your way through the level anyway you please, you figure out your own way to get through each puzzle. For the most part the controls do feel very slick and responsive with some minor issues on vertical surfaces. While you control your goo ball with the WASD keys, on vertical platforms you must also point your mouse in the direction you wish to go. This can be frustrating when trying to make a little leap over an edge as, while tilting your mouse up, you won’t be able to see where you’re going. I like the concept of the game but I feel like the controls could use some fine tuning when it comes to the vertical aspects.

Overall, Grapple is a simple, challenging (to me anyway) puzzle platformer with an interesting game play style. It hooks you, pulls you in and keeps you swinging through the levels.