“I can’t say enough good things about Ori and the Blind Forest.” – that was one of the repeated thoughts rolling around in my head as I sat down to think about the time I had just spent with this game. Of course, I am going to try and do this game justice – because I want people to understand what a beautiful, engaging and well-designed Ori and the Blind Forest is. I might not be able to say enough good things about this game, but I am going to try. 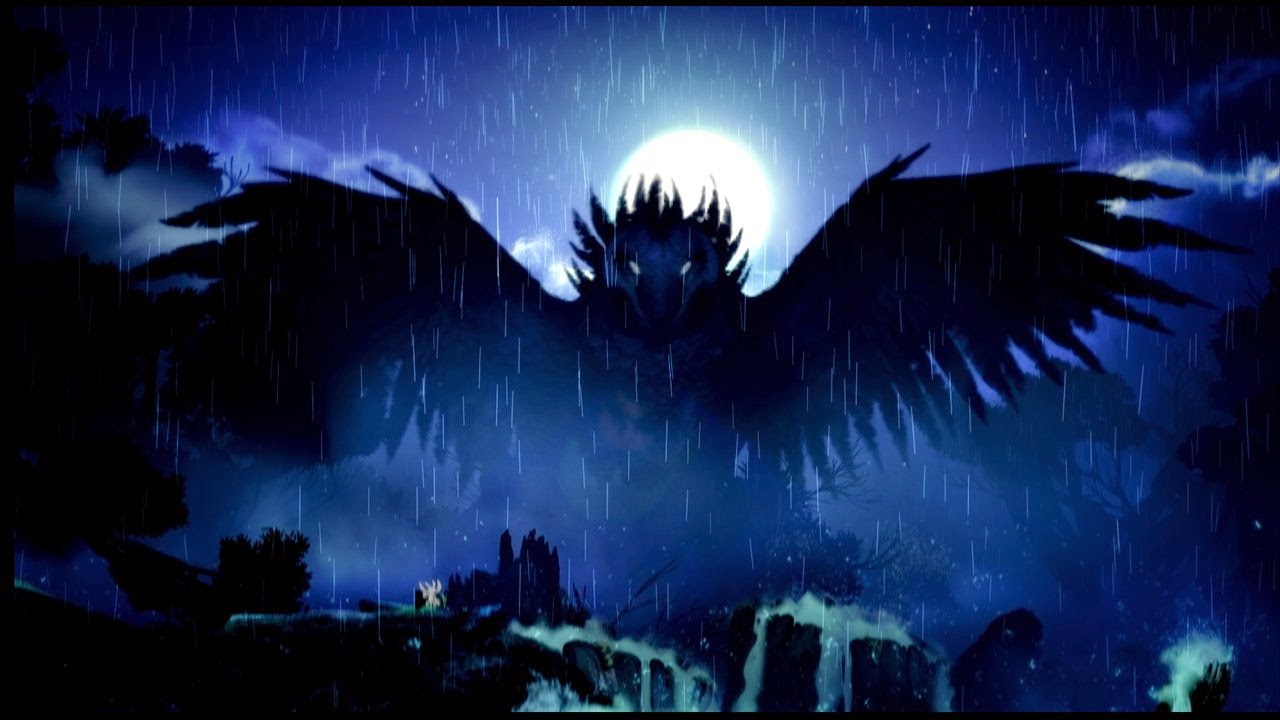 The key to how Ori and the Blind Forest presents its story is subtlety. You are not getting hit in the face with long cutscenes or hours of voice acting. Yet the story of Ori tugs at the heartstrings right out of the gate, establishing a relationship without a spoken word. In truth the introduction reminds me of how beautifully crafted the introduction of Pixar’s Up was. The way the narrative is told is unobtrusive in how it is handled, letting the game play out while still remaining relevant between quests and stages.

Anyone who has seen screenshots of Ori and the Blind Forest can tell that the game is visually stunning, but these screenshots fail to do the game proper justice. The way the environment shifts and moves with layer upon layer of scrolling makes everything feel so alive that it could jump off of the screens. The characters are gorgeously detailed and animated, but the backgrounds are even more stunning. Given the number of secrets tucked into the world, this gives you even more reason to thoroughly soak in the atmosphere. The presentation is helped along with a musical score that is haunting and beautiful, every bit the enchanting partner to the graphics. 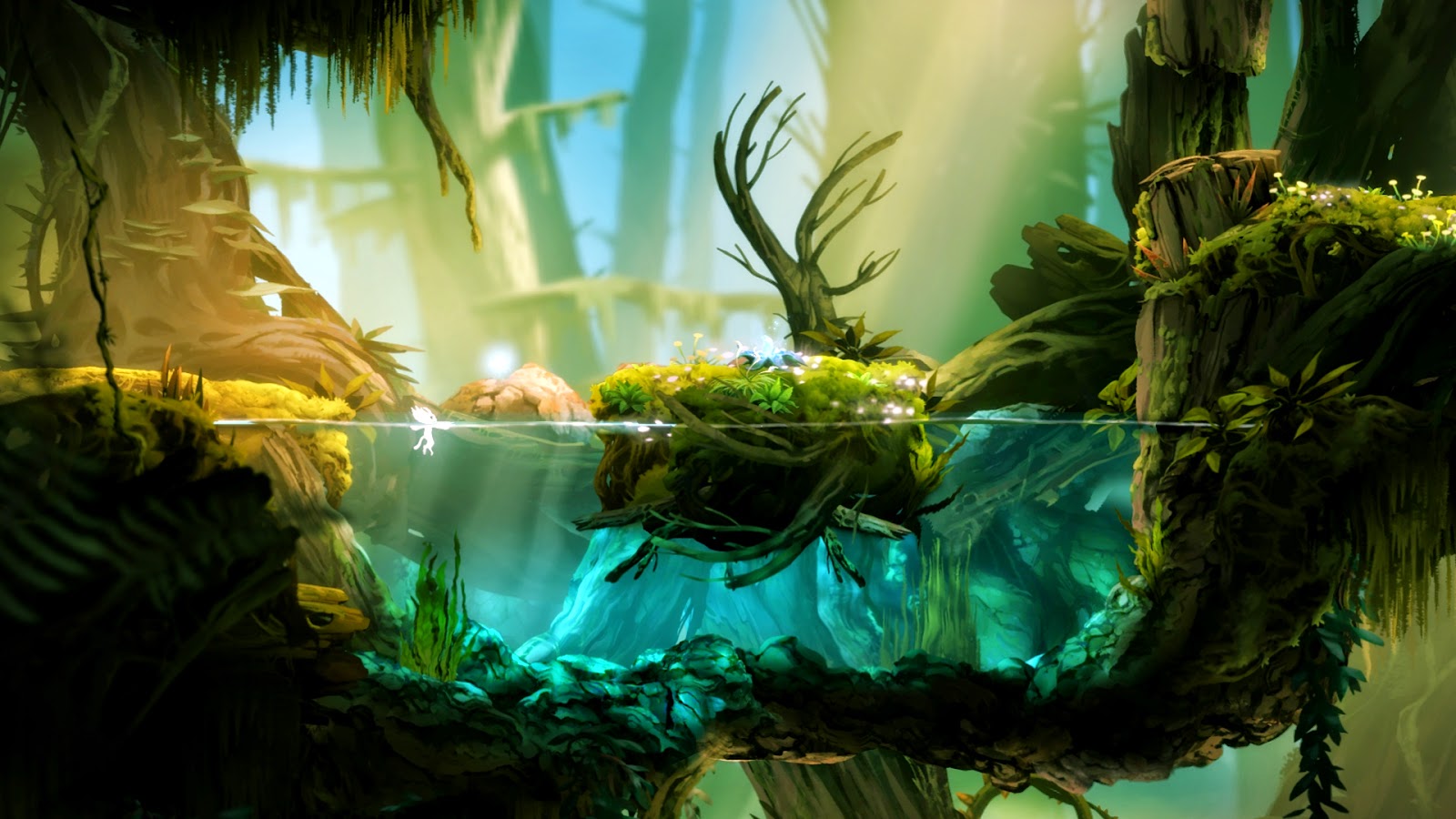 All of this is of course well and good, but the gameplay is what will hook players. To be completely honest, the beauty of the world was ever-present, but had a tendency to fade out of focus as I found myself concentrating on the game’s core mechanics. The term Metroidvania gets tossed around a good deal, but to be honest I feel Ori and the Blind Forest is less ‘vania’ and more ‘Metroid’. The way levels are designed has that same brilliant feeling as the early Metroid games, which were less about solid walls that impede progress and more about Ori’s capabilities at the time.

Ori has a gradual learning curve that is gentle enough to get most players invested right away. The jumping and basic attacking mechanic are tight and responsive, but they are both also quite limited. This makes Ori approachable to play while leaving a world of exploration just out of reach as you continue to drive Ori through varying objectives. A light RPG element in the skill three available lets you develop Ori in whatever way suits you. These can be combat skills to ones that have functional exploration utility, but almost all of them are invaluable when learned. 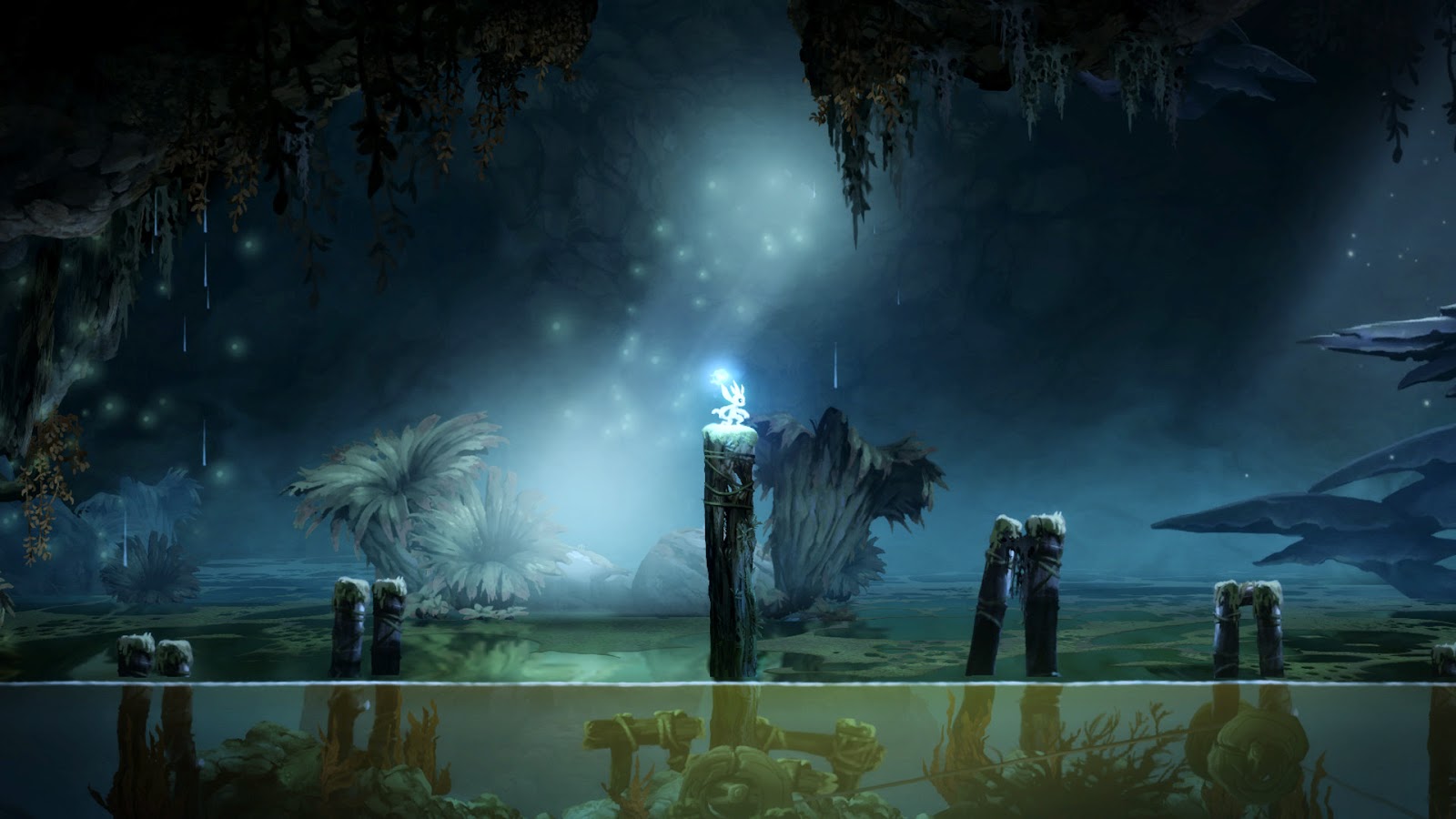 There is an element of resource management to Ori and the Blind Forest that is both incredibly clever and somewhat maddening to someone like me that likes to save early and often. Ori possesses a finite amount of energy that you must manage how to best leverage. This energy can be used on powerful attacks that might help you thwart a particular tough group of enemies, but that same pool of energy is also used to create save states. This adds an element of risk versus reward – do you play it safe and make a save, or do you trek on a bit further and save that energy for a battle where you may or may not need it?

One thing that Ori and the Blind Forest will not be accused of is being easy. While the barrier to entry is low due to the carefully balanced progression curve, there is plenty of challenge to be had here. Ori and the Blind Forest does not throw waves of enemies at you endlessly in the style of a Castlevania game, but the enemies you do encounter can damage Ori significantly in just a hit or two. Additionally, platforming is challenging but fair. Gabbing onto walls, sliding down them, preforming series of double jumps and more reminded me of some of the more challenging stages in Guacamelee, another outstanding platforming title. You will die a number of times (a shade over 300 in my nearly 9 hours of gameplay), a throwback to the trial and error of older games that blend platforming with enemies and puzzle elements.

None of this is more apparent than in the cataclysmic chase sequences. These are massive tests of both endurance, reflexes and patience. It is as if the entire world is out to get you during these, and every last one of Ori’s skills gets put to the test in some way or another. Without a doubt these sequences tested my patience the most, because failure is more unforgiving than the rest of the game, dumping you back at the very beginning to try again. While most of the game served up a fair and honest death, these sometimes had moments where death felt slightly cheapened because there was no indicator of what to do – I just had to try, die and learn from that mistake. Lather, rinse and repeat. Add to it that these scenes, while visually impressive, were the only instances where I noticed any sort of framerate issues, and they just come across as the low points in what is otherwise an outstanding title.

Thankfully these sequences do not make up the bulk of the time spent with Ori and the Blind Forest, and while they certainly have moments of frustration, they do not do enough harm to derail the entire experience. Ori’s adventures are still among the best available on any platform, and should appeal to ans of the puzzle platformer. It is hard to believe so many amazing things were crammed into a downloadable title, but Ori and the Blind Forest proves to be a masterpiece game.

Facebook Twitter Pinterest E-mail
Previous article Shadows of Esteren: The Monastery of Tuath - Tabletop and Board Games Review
Next article Rodea the Sky Soldier wants to play on your Wii as well as your Wii U