San Juan is a strategy card game that comes from the same team behind the excellent strategy game, Puerto Rico. San Juan is essentially a continuation of the original game, though this time taking place in its namesake, the capital of Puerto Rico. While the original Puerto Rico board game is the inspiration for San Juan, prior fans will be right at home with the familiar feel, while new features and fun will be had, as plenty has changed in the years since Puerto Rico’s release. We were able to get our hands on a copy of San Juan and here is how it all played out. 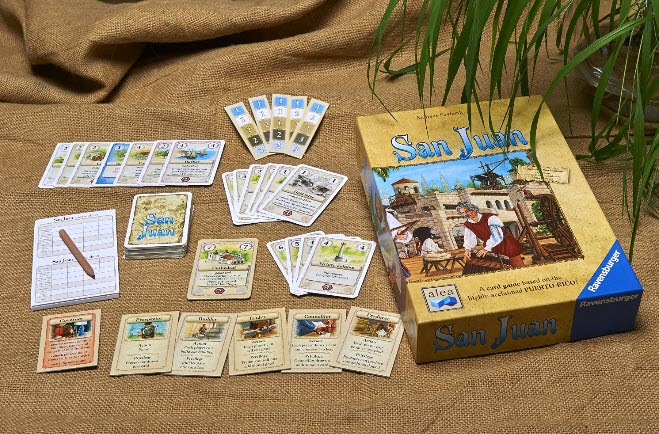 While more traditional board gamers and card gamers will be used to a bit more of a competitive style of gameplay, San Juan straddled that wonderful line between competitive multiplayer and playing solo but with friends (like two people sitting down and playing Solitaire next to one another). Like its predecessor Puerto Rico, San Juan is a strategy-based card game, but to add it to such a broad category of card games does it a bit of injustice since it is so much more.

It is far more like a strategy-based city-building card game where you take various turns as the Governor, which allows you to make the first move per round, from there you select your role from one of five “classes,” the Builder, the Producer, the Trader, the Councilor or the Prospector. Each class has a particular role that gives the player something of a special ability and managing what class you choose is crucial to getting to the end game (which is to build 12 buildings, each with a point value). As an example, the Builder gives you a discount on the cost of a building or the Councillor allows you to draw more cards on the 4th “turn” of a round.

While the quick rundown may sound confusing at first, the way the game plays out is extremely easy. Within the first 15 to 20 minutes, we (the players) were able to get into the groove of taking the turns, selecting our classes, then plotting out how we were going to spend our various goods / build the necessary buildings. By the fifth or sixth games we could get into a free-flowing pace that went from start to finish in about half an hour; in fact one game lasted only about 20 minutes, as my sister managed to find the perfect rhythm and absolutely decimated me. 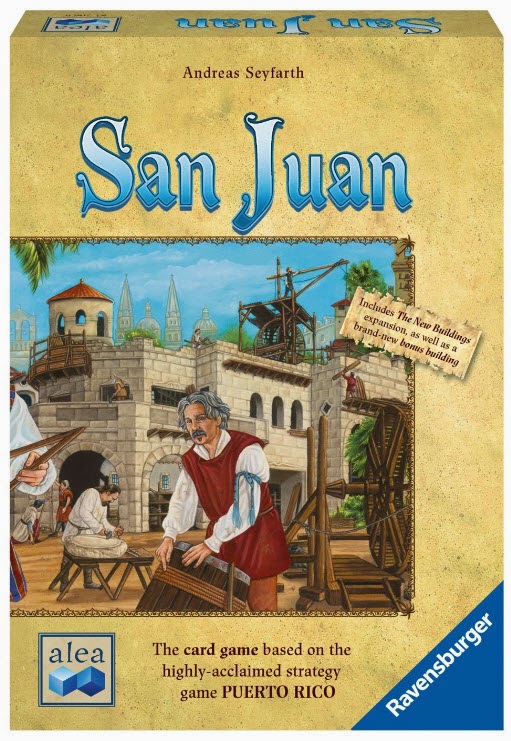 If there are any particular negatives to San Juan it is that getting into a set pattern is far too easy, of instance, in the first two or three rounds you may want to choose Councilor, which allows you to draw, and keep more cards (which act as currency for buildings), then from rounds four and on if you alternate between Producer (which allows you to produce +1 good from your different factories) and the Trader (which allows you to sell +1 more good), then periodically throw in the Builder class, you can amass a ton of wealth then go on a spending spree in a very short period of time, which is actually how my sister beat me so soundly. Subsequent games ended up falling into a very similar pattern and it all came down to the luck of the drawn; whoever got the Library out first was sure to win (which allows you to do a number of different things, like producing up to 3 goods if you’re the Producer), and if that one that places the Library out also has the Quarry (reducing building cost), well consider it game over.

Over all San Juan is an excellent and fun strategy card game that builds upon the proven success of Puerto Rico by adding new buildings and production facilities. After a very low learning curve, gamers can quickly and efficiently plow through a dozen games while eating a pizza without ever really feeling like it was a waste of time. When adding more than two players though, the length of time to complete a game can grow exponentially, in one case it took three of us just shy of 90 minutes to eventually find a winner. In all honesty, I had more fun in the dozen or so games of San Juan than I have had in a very long time; it is, without a doubt one of the best games I have played that really caters to low-key nights in with good friends.