There are some things that should stay where we left them back in the past. Nostalgia is a powerful thing but then again there are those that I am more than happy to re-receive almost a decade and a half later. I loved Majora’s Mask much more than I could ever love the Ocarina of Time. Yes I said it. MORE. I don’t know what it was all those years ago that made me fall in love with this title, but it’s back once again and like an old friend I am more than happy to receive and enjoy its company once again. 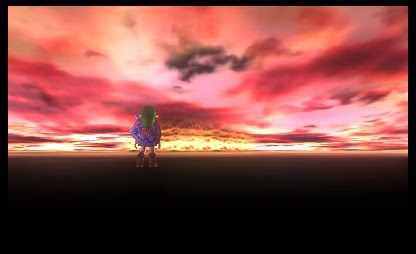 While I may not remember what drew me to Majora’s Mask fifteen years ago, I know what drew me back into the world of Termina for a second foray. I think that it’s what keeps bringing me back to the worlds of Demons and the Dark Souls. Termina (as in Terminal) feels like a much darker place compared to Hyrule which is nearing its end of days. This is not an adventure of exploration, its not even an adventure to save the world from the clutches of evil. Majora’s Mask is an adventure of survival that has you save the world in the progress.

Having gone through the same treatment as The Ocarina of Time, Majora’s Mask is the second of the two N64 titles to be remade and mastered onto the 3DS. It should be noted that I have played this on the New 3DS and the added C-Stick was more than a welcome addition. I am not sure between Wind Waker HD and Majora’s Mask if I’ll ever be able to get back to a Zelda game where I can’t look in one direction and run in the other.

Majora’s Mask is one of the few entries into the Legend of Zelda that actually has nothing to do with Zelda. Link, after having gone back in time after saving Hyrule at the end of the Ocarina of Time, leaves the lands behind for somewhere new. Finding himself in a new land, he now faces new challenges as he quite unintentionally falls into a new adventure that unlike his previous endeavors has a time limit. Having come into a massive amount of power, a skull kid wearing the mask of Majora intends to plummet the moon into the ground wiping away everyone and everything. Because saving the world once apparently wasn’t enough for Link, he’s at it again. 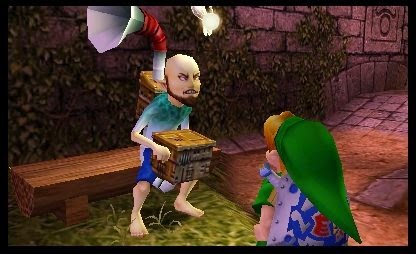 One of the big things with updating or remaking a game even from just a few years ago as we’ve seen a lot of lately with HD Remakes or Remasters, is how to make it feel new and fresh again. After having knocked Wind Waker out of the park, Nintendo seem to be on a roll with remaking the older Zeldas for the more current generations of both handhelds and home consoles. Returning to the world of Termina is a gorgeous experience as everything looks fresh and well detailed from the poisonous swamps to the lush green expanses just outside of the city walls. I will not call the icy mountain tops pretty as I live up in Canada where the snow is too high and our winters on top of lasting for 6+ months are -40 celsius of late. I could do without snow levels. Thankfully there is a nice beach. Landscapes aside, all of the character models have also been remade to fit inside of this newly re-detailed and upgraded world making movements feel much more natural both while both exploring and talking to townspeople, to fighting different enemies and bosses.

I have only one complaint, which some may not have a problem with. I’m the kind of player that likes buttons. I press the menu button and I go through my menus. Majora’s Mask uses the touchscreen for just about anything and everything menu related. Now, while you can navigate through the menus with the directional pads, getting into the menu can only be done with the touchscreen. At the same time, conveniently, the Ocarina of Time that continues to make its appearance is always available and isn’t required to be equipped in one of Link’s coveted quick slots but instead sits in the bottom left corner of the screen awaiting to be clicked on. Now while I do enjoy the fact that certain items are just a screen tap away and that I do not need to go through menus to have it equipped, I still would have preferred to have the rest of the menus accessible by more than the touch screen. The location of the inventory button can feel awkward at times and even hours in I still find myself hitting the start button instead which loads up the journal instead of the screen that I meant to load. There’s just no pleasing some people is there?

The famous notebook that is given to Link near the beginning of the adventure makes a return once again but unlike the first time, this new version is much more detailed. Originally providing a list of events, this newer notebook keeps track of how far along a player is within these events while also keeping track of everything that had already been done for future reference. As this is essentially a case of Groundhog day, there are a lot of these events that may need to be completed more than once for certain quest lines to be completed making the enhancements to this journal all the more useful for planning your path to the next goal. 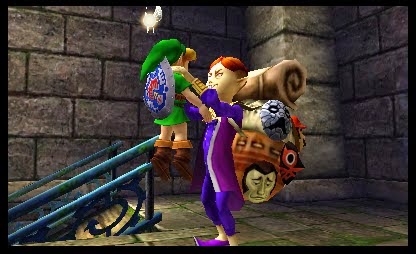 The one danger with replaying an older game in a series, remastered or not, is the inevitable comparison to another entry. Having very recently gone through A Link Between Worlds, Majora’s Mask while being more open in its approach as to how players want to go about doing things, still forces them into a linear path. I’m not saying this is a bad thing as it follows the original Zelda formula, and it is a fifteen year old game, but it did feel rather limiting at certain points. Remembering that this is still an older game in the series and not a new one is important as to not let other feelings get in the way of this incredible remake.

For anyone coming into Majora’s Mask for the first time, this is a good place to start. The advanced visuals and smoother controls made what was one of the hardest Legends of Zeldas that much more enjoyable having corrected original issues such as the camera angles among everything else. Combat is as smooth as ever allowing for Link to jump in and out with much grace (Or less so if you’re me forgetting about proper timings during boss fights. Go me!). What I found to be a great addition was the movement of the gyroscope when taking aim allowing players to simply move the 3DS instead of the thumb stick. Please take note that if you do not know that the option is on and you are travelling in a bus on a bumpy road, there is a high possibility that your shots will not fly true. I found this out the hard way.

From the start it was clear to see how much love and care Nintendo put into remaking this amazing entry into the series. Not only was everything upgraded visually and audibly, but they also went about making other modifications that still force players to move their collective tails faster as certain older in game mechanics don’t quite work as “slowly” as they used to making that clock tick that much faster to Termina’s seemingly inevitable fate.