We have looked at some games by Sekai Project in the past, so of course we became curious when we heard about The Reject Demon: Toko Chapter 0 when it came out on Steam’s Greenlight program. This puppy got approved in under a week – impressive. 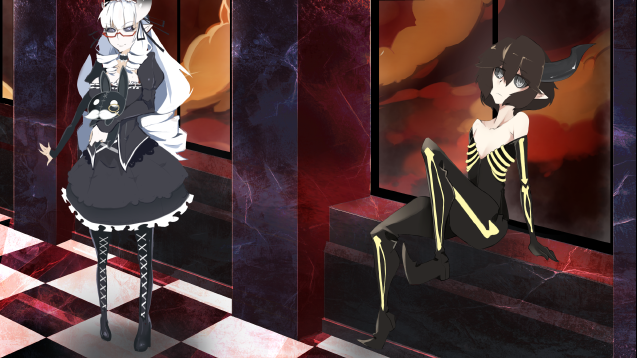 Here is a description for the game:

When a human is destined to die, the demons ferry their souls to the afterlife. ‘The Reject Demon: Toko’ is the story of Toko herself, a demon who has been kicked out of hell. Toko cannot ferry human souls to the underworld, and every day she stays on earth has her becoming increasingly human. Her troubles, however, are only just beginning.

Toko, after being taken in by the jubilant human Nadia, is being hunted by her past alongside her own internal challenges. The Reject Demon: Toko is about comedy, action, romance, and Hell’s sacred art of Rock n’ Roll!

Originally conceived during a game jam in early 2014, ‘The Reject Demon: Toko’ has since exploded, and there’s so much more of this universe to show you. Now we are planning to release the full story of the Toko Kinetic Visual Novel, over the course of 4 Chapters, starting with Chapter 0; it features much improved art, a much bigger cast, new scenes, and a whole new conclusion that doubles the length of the original story!