Excellent pacing, colorful anime style graphics, unique characters and a story that is actually interesting? Under Night In-Birth Exe: Late may have a somewhat ridiculous title, but the game itself is a thinking man’s fighter that manages to stand out and be itself in a genre littered with too many sequels and far too few fresh ideas. 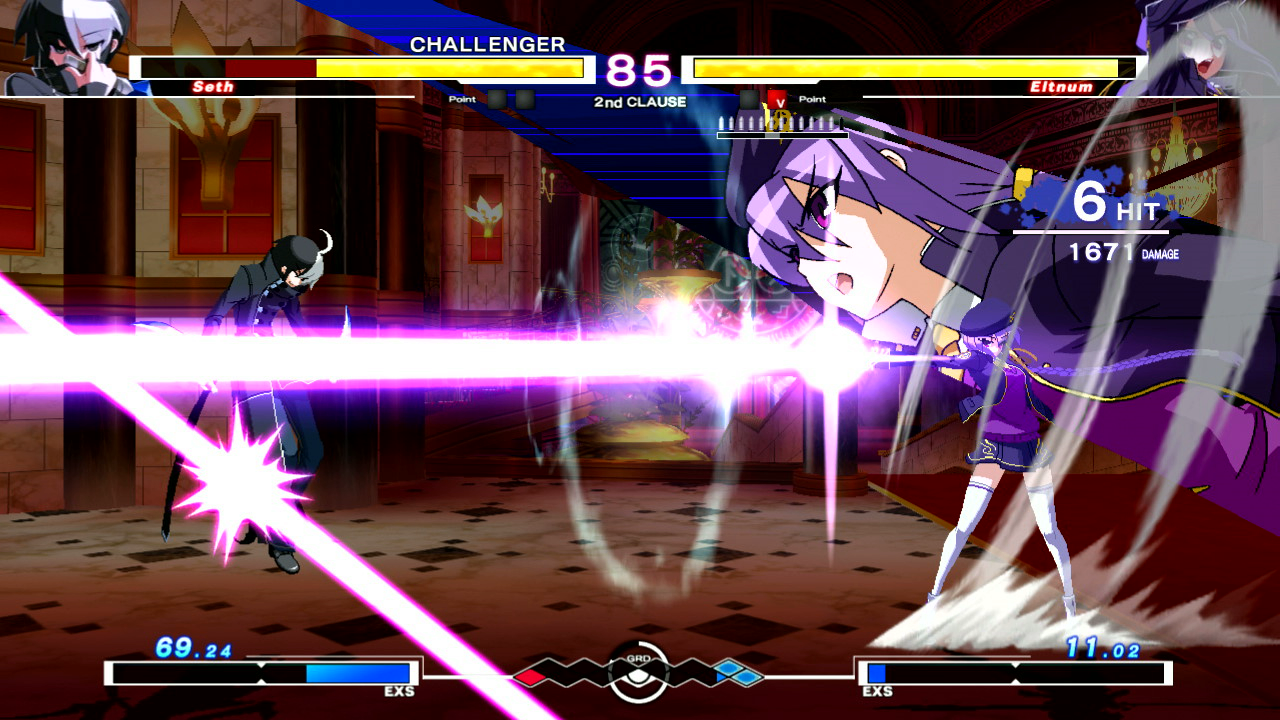 That is not to say Under Night completely changes or reinvents the genre. In truth when you first fire it up, your eyes are assaulted by a long list of modes and features that upon closer inspection all are basically what you would expect from a fighting game. Survival mode? Check. Timed mode? Check. Score attack, online, profile card modification, arcade mode and more? Check, check, check and more check. I have been looking forward to this title for a while (as evidenced here, here and here for example) – and I am happy to say I did not come away disappointed.

There is a lot of substance there, but Under Night provides plenty of style as well. The visuals are gorgeously animated and full of life and color. Character movements are fluid and combat never stutters. If there is one thing I wish there was more of, it would be a proper story or campaign mode. The story itself is sprinkled effectively enough every few fights when playing the arcade mode, but the world created here is interesting enough that it could have been fleshed out further to greater effect. 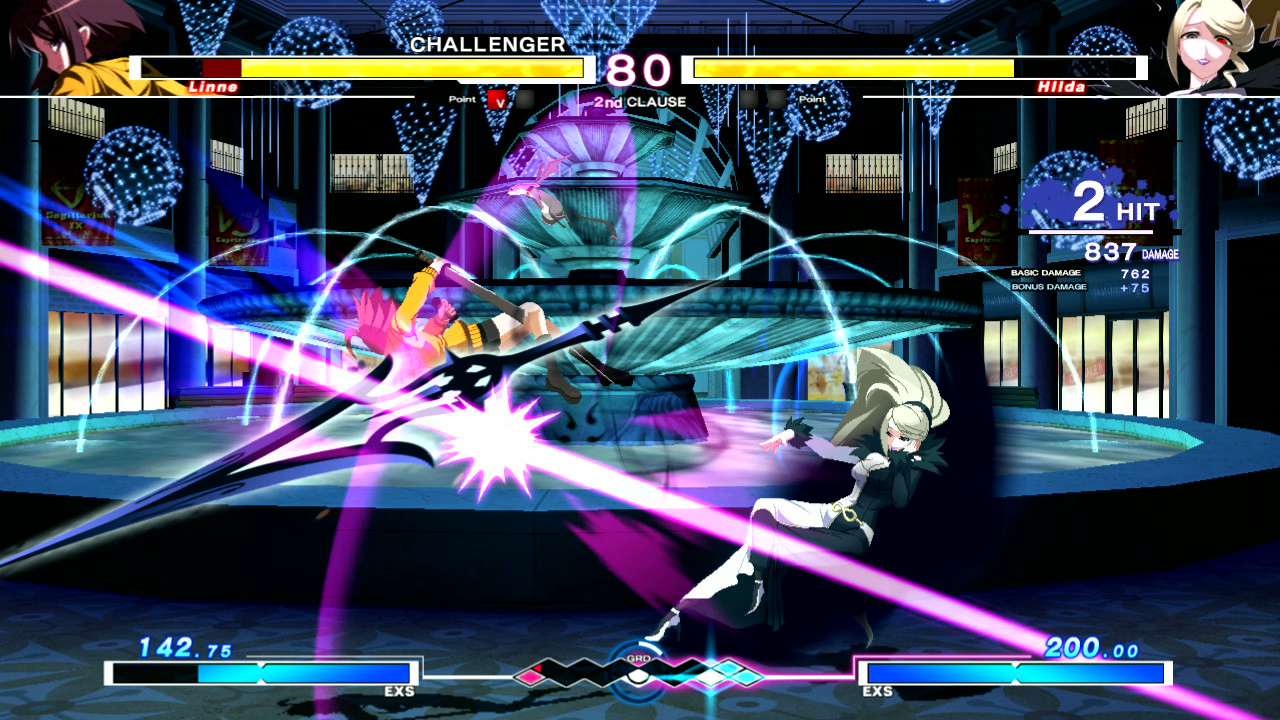 This would have also given the studio a chance to further show off their animation and art style, which is outstanding. The development team at French Bread also did a nice job with the soundtrack. It is not the best I have heard in a fighting game, but it is the upper echelon to be certain. The lack of English voice acting will probably bother some people – I know I prefer it myself, but this is a relatively minor quibble with the otherwise excellent production values.

At first glance, it might be easy for someone to think this is some sort of a Blazblue title, especially given the association with Arc System works. However, those similarities only run skin deep. Combat is a completely different beast. It is not the cluster of hyper-kinetic combos and juggling found in that series. Under Night has its own pace, and it is most certainly an aggressive one, but with a distinct feel all its own. 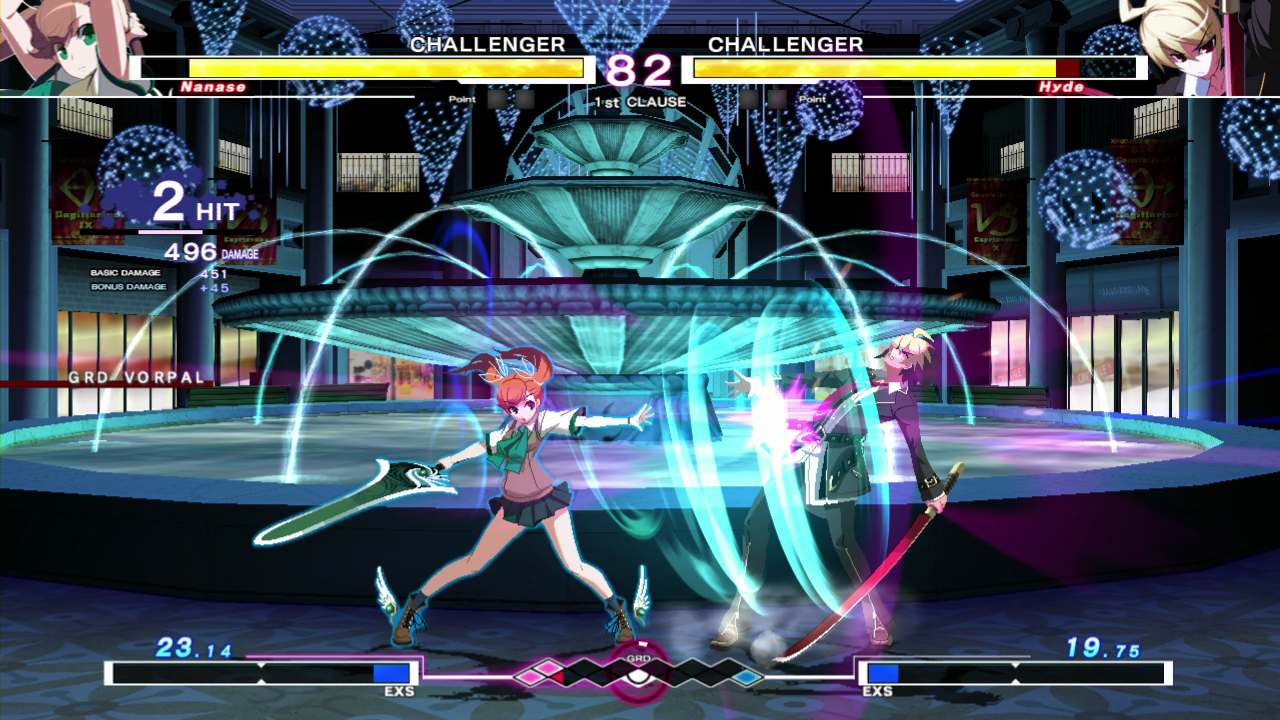 Part of the reason this game breeds aggressive play is due to the GRD system. This is a gauge that continually  updates with the ebb and flow of combat, and it rewards players who are pushing forward and initiating combat. Should the you gain the edge there, you can deal extra damage and pull of special combination moves that add a layer of strategy to the proceedings. Treating this as a button masher or only using one or two moves over and over again will likely get you destroyed by a player with some experience.

That is not to say Under Night is not accessible. I actually found it quite easy to play. I took Hyde right off of the bat and launched myself into the arcade mode. He handled like a typical “Ryu” character by and large, with a nice blend of skills including ranged and elevation attacks using the same tried-and-true controller schemes. However, I quickly found myself trying to grasp the GRD system and realized that it was rewarding me best when I was mixing up my attacks and bringing the aggressiveness. That is not to say there is no place for a defensive player who has excellent timing on their counter attacks, because a well-placed block can help improve the meter as well. However, this system does not reward players who would rather pull to the far back side of the screen to turtle while throwing ranged attacks, and the flow of Under Night is far better for it. 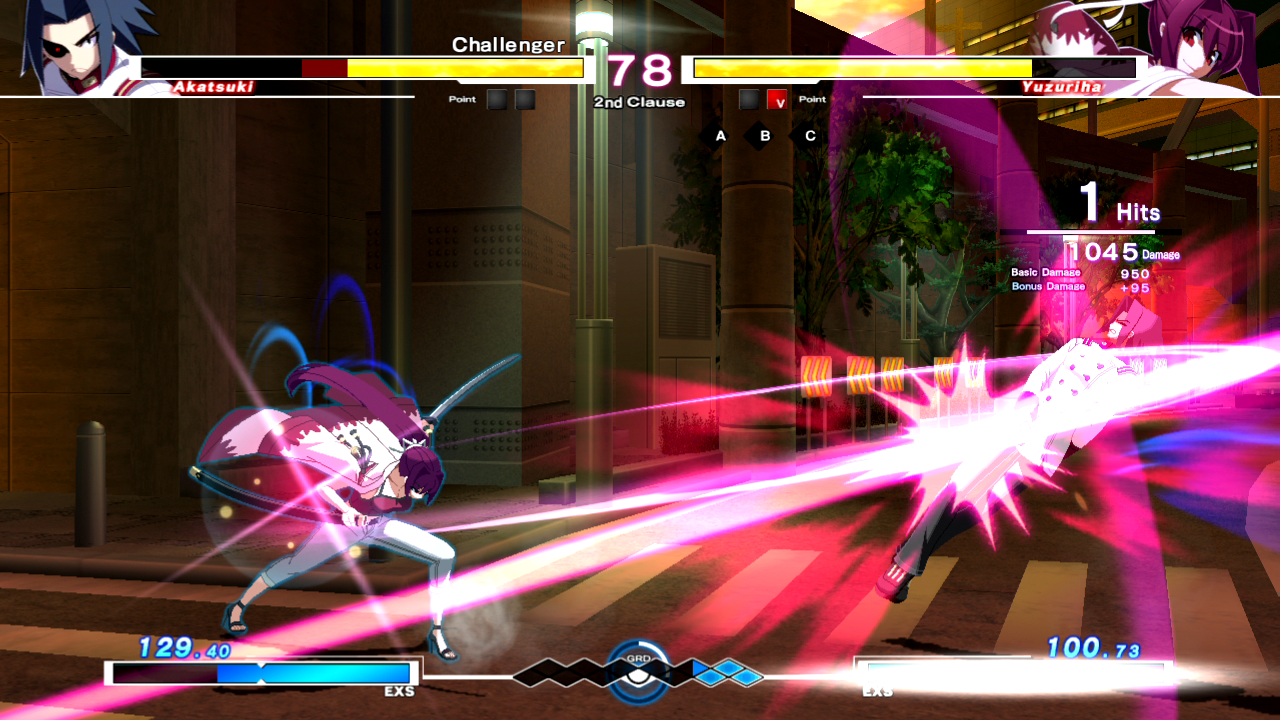 Characters are very distinctive, and this is not just visually. Their styles really do feel quite different from one another, and while the majority of the characters feel more ground-bound than some fighting games out there, you can really tell the team spent a good deal of time trying to get the balance right. This holds true of the online experience as well, which connected between different regions and did so with almost no lag to speak of. Playing local is always the better option (the trash talk on the sofa is always more fun), but it is nice to know that the online option works so well.

If there is a concern I have, it is that there might not be as much content as some players might want. The list of fighters is a somewhat modest one compared to games that have a lot more history behind them. Games like Tekken and Street Fighter can offer three to five times the roster size, and while many of those characters do feel like copies of one another, at the end of the day it is still a larger cast of characters to play with. It is fun unlocking galleries and buying new items to customize your player card with by beating the various modes and playing the game, but I feel like it might lack in longevity all the same.

That is about the only real criticism I can levy at Under Night In-Birth Exe: Late, however. This is a finally crafted fighter with expert balance, diverse characters, a variety of modes and outstanding music and graphics. All of these benefits are rolled into a fighting game that provides an extra layer of tactical thinking, making Under Night one of the best fighting games to come out in some time.