I have to say that the Steve Jackson Games are quickly becoming some of my favorites. There is an irreverent humor to them whether it is in Muchkin Deluxe or their take on Zombies with the Munchkin series, but clearly the designers are not a one trick pony because Chez Geek provides ample laughs built around solid mechanics that work beautifully together.

These are the three primary elements advertised in Chez Geek. The idea is that you are setting up a friend or apartment in this tongue-in-cheek look at early life on your own. At least, this is somewhat how I remember my college years – the ones I can recall still. Everyone has to acquire a job (after all, bills don’t pay themselves. Wouldn’t it be great if they did though?!). Each job pretty much sucks. Pizza delivery,  Corporate Drone, Bike Messengers and more. The rest of the deck is made up of Life Cards, which have a variety of effects.

Some are a bit more simply named like CDs, Bubble Blower and Anime, while others get a bit more adult-oriented such as Beer, Bong and Campus Nookie. How do all of these things work into a card game? Well, it starts with drawing from that aforementioned job pile. Each job has more than just amusing art to it. You then have a way to make money that you can spend each turn. You then also have spare time and lastly what each job calls a slack goal. Generally cards with lower goals make less money, while the ones that have more money have higher slack goals. Free Time indicates how many activities you can do, and some jobs have more flexibility there. It is a good system that relies on three legs to prop it up. It works out to be balanced, but getting two dramatically differently jobs can make the game play out quite differently. 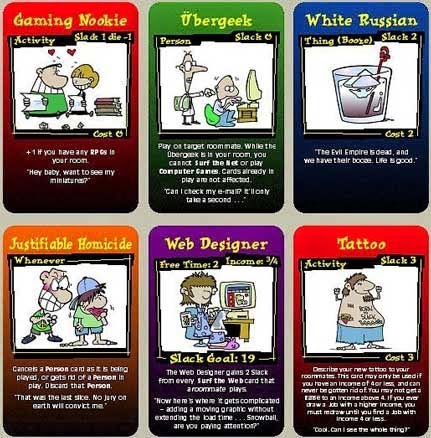 Chez Geek is built around needing at least two players, but really works best when you have a large group of people together. Four really feels like a good point for getting your friends together while playing this. Life Cards is where the bulk of the action really takes place, however. They come in a handful of different flavors. You have ‘things’, which are blue and usually have drinks or toys. Green cards represent ‘person’ cards. These can be iffy – some are great for building slack, others can derail even your best efforts. ‘Activities’ are represented by red cards, and these are basically things like sleeping or playing a video game. Last are the ‘whenever’ cards. These are orange and remind me of Instants from Magic: The Gathering. Basically, they change the rules of the game at any time, and are great for messing up your opponents’ plans.

Each turn consists of the usual draw phase and then you roll a die. In fact, you use that die for just about anything that relies on ‘chance’, like the ability to activate a card or to solve a variable (such as your income having multiple potential values that fluctuate one round to the next). Next up you call people. If the potential house guest is of the unwanted variety, you can attempt to pawn them off onto an opponent, but if they bring benefit – you try to play them on your side. Free time is the fourth stage of the game, and here you can do things like watching TV or buying things. This is your primary means of building slack points. Lastly you discard, because you can only have five cards in your hand at maximum when the turn ends. 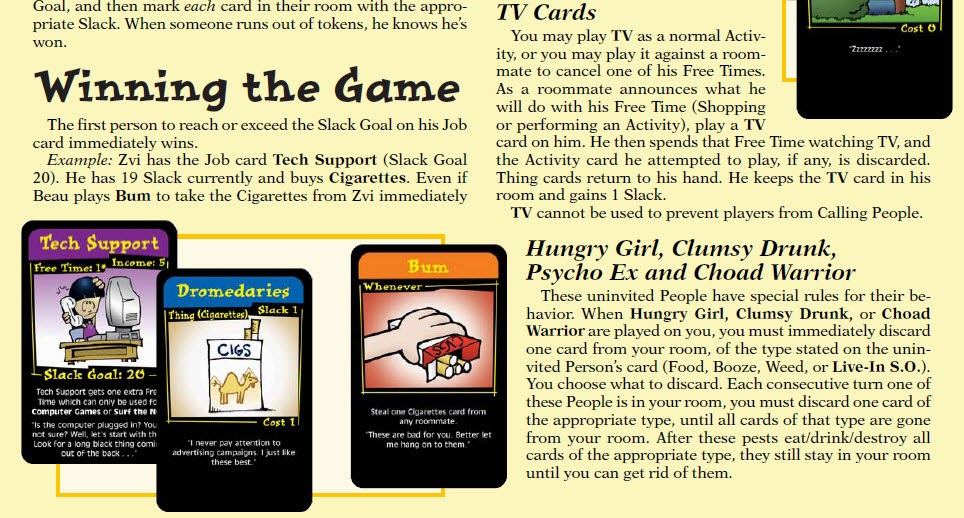 Like Munchkin, the pace of Chez Geek is fast, but the rules are even simpler to learn. This was a first time pick up and play of about twenty minutes – one of the easiest games out there to learn. I do not want to tab it a ‘filler game’, because those are usually games that I play once when I have fifteen or so minutes to kill. Chez Geek is entertaining enough that while it can be crammed into a twenty minute session (with two or three players. Once you get to four or so, it is easier to stretch a game of Chez Geek into the 45 minute range), but usually we wind up playing two or three times in a row.

Chez Geek is really helped by the large number of diverse cards. There are also expansions you can purchase that slide right into it. While Munchkin Deluxe and Munchkin Zombies Deluxe are very similar, they are not interchangeable. Here with Chez Geek, you can expand easily on the core game to add variety while maintaining the core mechanics (similar to the ever-expanding Red Dragon Inn games). All of this variety helps to keep replay value reasonably high. 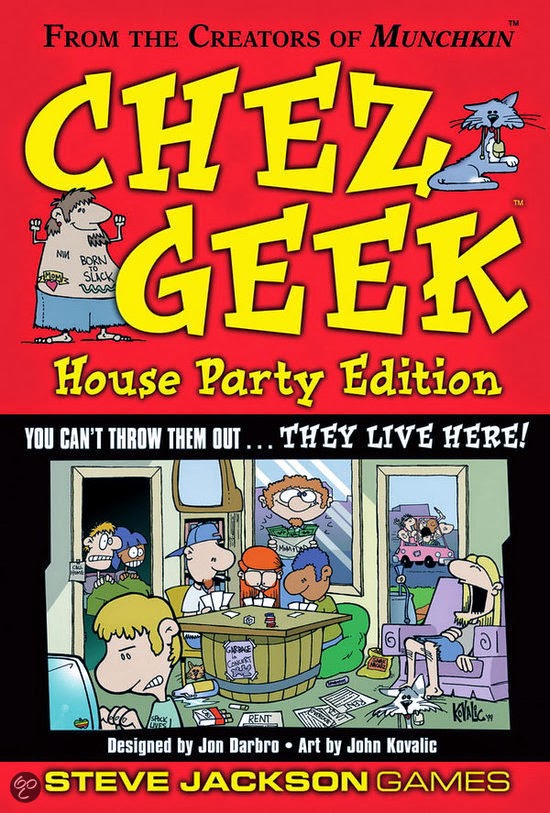 I would say however, that the simplicity of the game means that it inherently does not offer quite as much variety as some other  titles. It is easy to compare this game to one of the two Munchkin titles I have reviewed, because of the similar use of humor. I would say that the Munchkin titles rate somewhat better for me in part because of the themes of the two I played so far, as well as the greater depth they provide.

Chez Geek works because the core mechanics are balanced and make for a good game, but it excels because the irreverent humor should appeal to anyone who has ever had a roommate. Of course many of the notions here are taken to the extreme, but that is half of the fun. Chez Geek is quite different from the Munchkin games in how the game is played, but it retains that element of mirth that makes the game fun – and isn’t that why we play board games in the first place?