I’m not quite sure what it is with giant robotic suits of armor that I find so appealing, but the idea of flying around in a giant mech is just really cool. Damascus Gear takes a page out of From Software’s Armored Core series with a crazy amount of parts to customize your giant robot in this isometric third person shooter. Get ready to let bullets, missiles, and lasers fly against substantial amounts of enemies because there is no shortage of them! 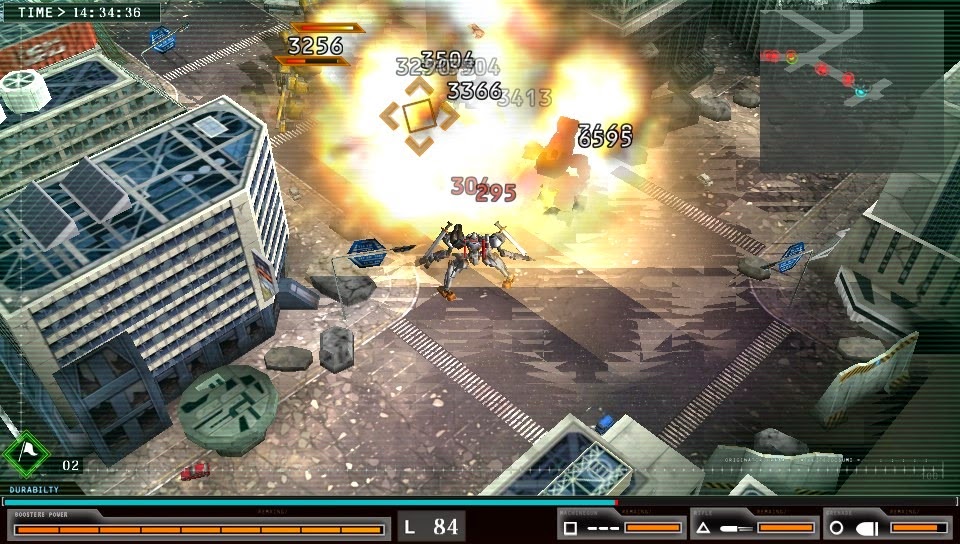 In the year 2042 mankind invented a new system called the GEAR to help bring on better times. Like most things that our race builds however, we turned it into a weapon. Used as mechs the GEAR became our new platform for war like we’ve seen in several possible outcomes from the Gundam Universe over to the Armored Core and Macross realities just to name the popular ones. What wasn’t expected was the day they decided to come into their own being and make the decision that mankind wasn’t fit to exist anymore. The GEAR became the RAGE and wiped out over 80% of humanity in two weeks. Over half a century later you, the player, find yourself sitting in a cockpit of a GEAR hoping to not only defend what is left of your race, but to take back the surface that has been controlled by the RAGE for the better part of the century.

Setting out to recapture the surface you’re not only going to need skill, but you’re going to need weapons. Like any good mech based adventure, players will be able to equip pieces as they see fit for their own play styles. Each weapon type at your disposal has its own strengths and weaknesses as well as subcategories which dictate if they are physical projectiles or laser. Assault rifles, swords, pile drivers, shotguns, mega particle cannons, flame throwers, and more are available to crush the foes that lie between you and your goal. As mentioned what works for one may not work for another. 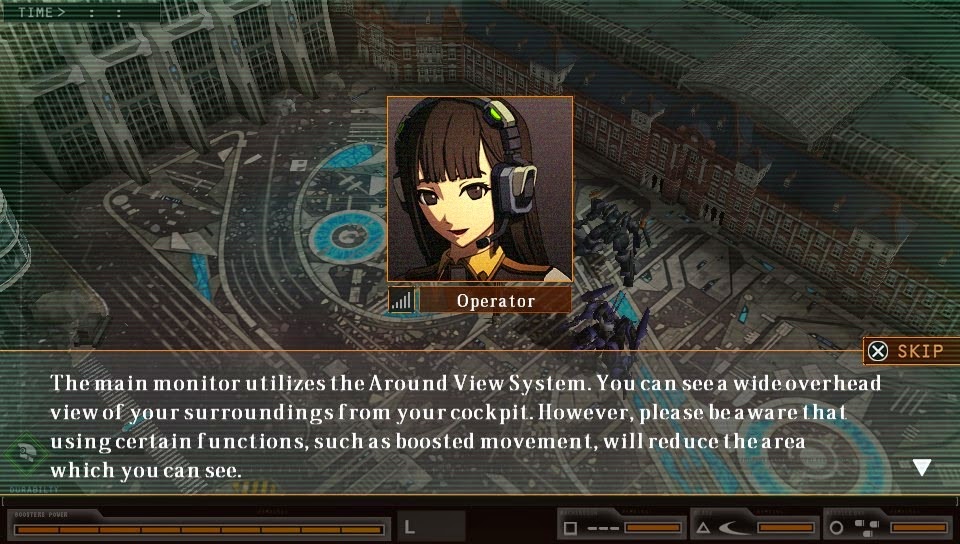 The player’s mech can support three separate weapons systems at any one time. I swear that I sometimes felt like a pirate wielding a pistol and a blade as I tore through the enemy lines until I unleashed a mega particle cannon that filled up my screen. Weapons regardless of their type or category are used in an interesting way. There is no ammo to worry about but instead rechargeable meters for each one including the melee weapons. This makes the worry of running out of ammo negligible as long as another weapon system has recharged.

While it may not seem like much of a big deal near the beginning of your training, once you make your way up the ranks and the real parts start coming in power usage is going to start to be an issue. Each weapon, head / armor / legs / or shoulder piece each use up a portion of the total possible output. Managing this is key in accordance to what you really want to be able to do. I like my armor but I also like my mobility. Taking hits is nice, but if they can’t hit me, then I don’t need to worry about repairing in the first place. 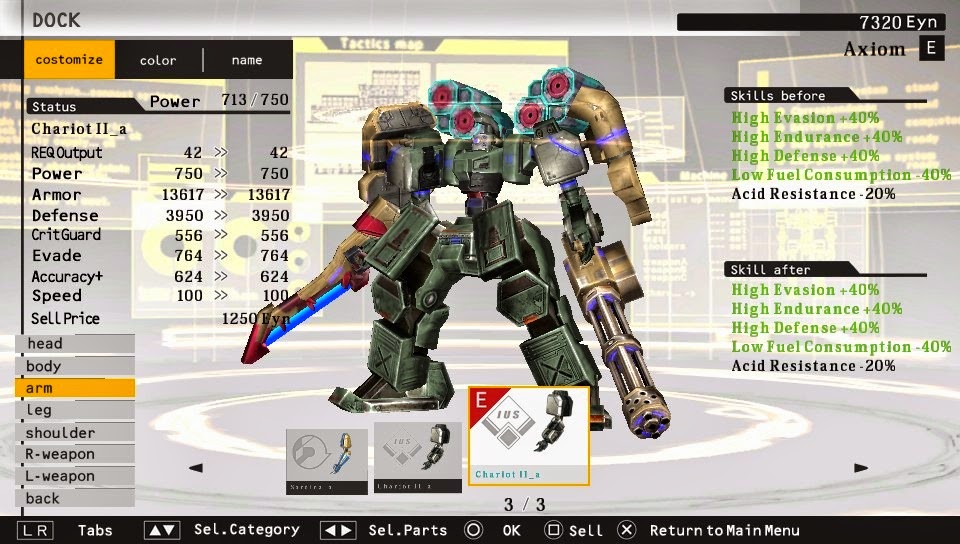 While upgrading is awesome, you need to go out on missions in order to acquire the pieces necessary to move on. This Catch 22 is solved rather easily however. Each possible mission comes in the form of ranks from E to S. Don’t worry though, as the rookie of the group you get to start into the E ranks and eventually work your way up. Missions generally take from about five to fifteen minutes depending upon the objectives. There is never any worry about what you are required to do as it is always quite specific on the mission parameters.

The gameplay was rather smooth for what I originally mistook as a twin-stick control style at first glance. Instead of this, the players mech actually faces in the direction of the L-stick while auto-targeting enemies that are in your way. Sadly there was no way to change from target to target and sometimes this could cause issues as the target would move over when you really didn’t want it to. But other than those tiny instances everything worked rather well including the mapping of the controls. Players as mentioned have their three separate weapons systems each with their allocated command buttons. The first two are interchangeable at any point outside of a system and can be anything from the mentioned riffles over to the swords or shotguns. The third system is reversed for the bigger toys such as mega particle cannons, satellite strikes, mine layers and more. Believe me when I say that choice is more of a paralysis than a problem.

Alongside the attack commands are three other abilities to help out on a stage. The first is the ability to quick dash out of an enemies way which becomes really handy the bigger they get. The second allows for a more constant dash which while constantly draining your thrusters allows for better movement across the map. The last of a players options is the ability to repair yourself by using kits that you take along with you on your missions. These can generally be picked up in the earlier stages but as things get tougher you may want to make your way over to the shop to take some extra with you. 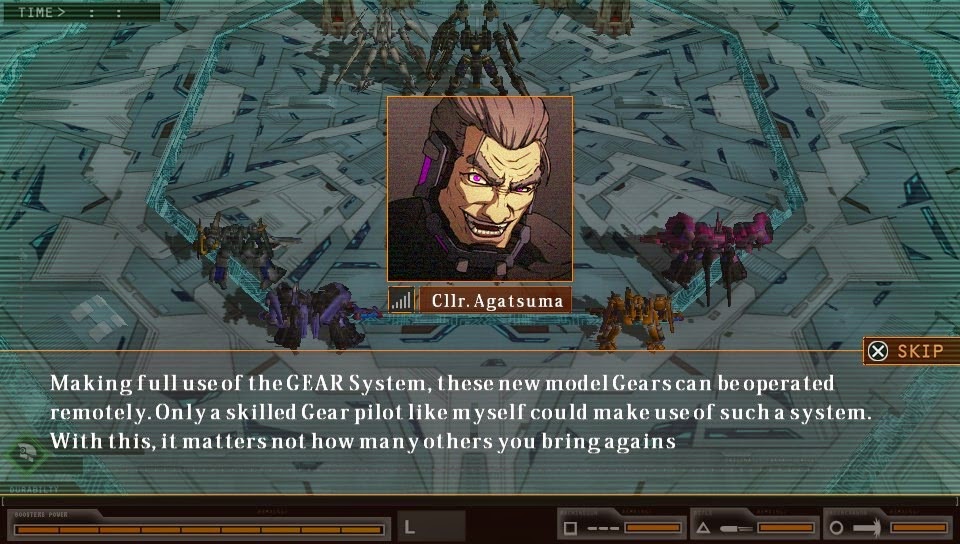 All of these weapons and capabilities are there to help retake the districts of Tokyo in which you are going to spend a lot of time fighting on. Technically Damascus Gear doesn’t have that much in regards to stage maps. The game is in a way well designed in that case as the players goes up the ranks, more districts are unlocked and utilized in the harder missions. That being said there isn’t really much variety between each other than the actual layout. While it works for this war torn area, it could have featured a bit more in terms of design.

Overall Damascus Gear depending on how much players will strive for S ranks on each stage on their way through the ranks should take anywhere between five to ten hours. Already sporting DLC stages with new story lines was a nice touch. It would have been nicer for the models to have been a bit bigger to truly see the distinctions between each, but between the various gameplay elements and depending upon your equipment, in the end that too wasn’t much of an issue as the enemy was blowing up left right and center and there was no chance to admire them before they littered the streets.

Damascus Gear is a fun quick paced game that with a few tiny tweaks could be even better but as it stands now it was more than worth the time with it.